An APES WEEK MIGHTY Q&A with Caleb Monroe, the writer of Dawn of the Planet of the Apes: Contagion, the Boom! Studios one-shot that gives you a glimpse of what happens before the new film.

Wanna see an EXCLUSIVE preview of the book — a convention-and-online exclusive — and how to get it? Of course you do! CLICK HERE!

In the meantime, here’s my talk with Caleb about the comic and how it fits into the film’s world. 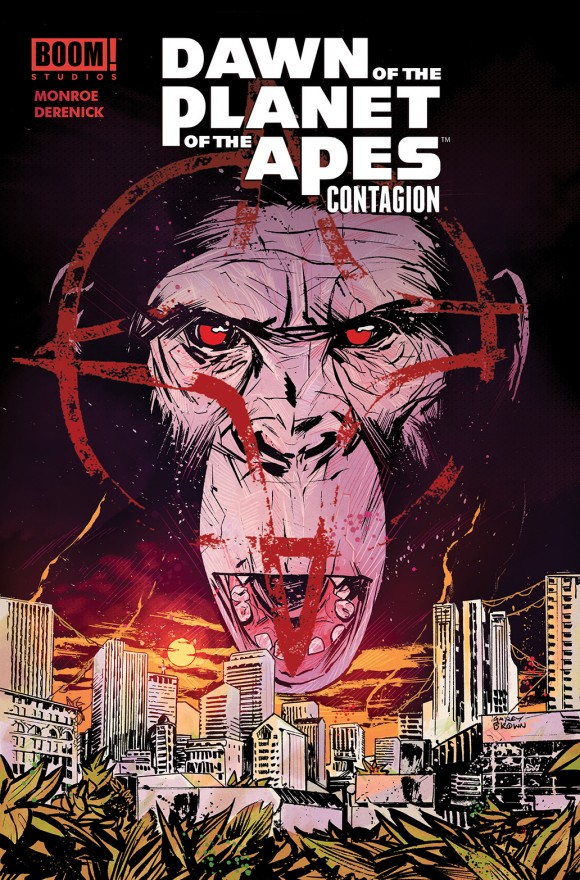 Dan Greenfield: How did you come by this gig?

Caleb Monroe: I’ve done quite a bit of work for Boom! In fact, they gave me my “break” back in 2007 with The Remnant. So there’s some history there. Last year, just as I was wrapping up a yearlong run on Steed & Mrs. Peel, editor Dafna Pleban contacted me to see if I’d be interested in doing something in the new Planet of the Apes universe. I immediately said yes: I’d been wanting to work with her for a long time, and vice versa. There were a few occasions where it had almost happened, but those projects, for whatever reason, fell through. Plus, I love near-future science fiction, and Rise of the Planet of the Apes is some of the best of that we’ve had on the big screen lately. I jumped at the chance to work in that universe. 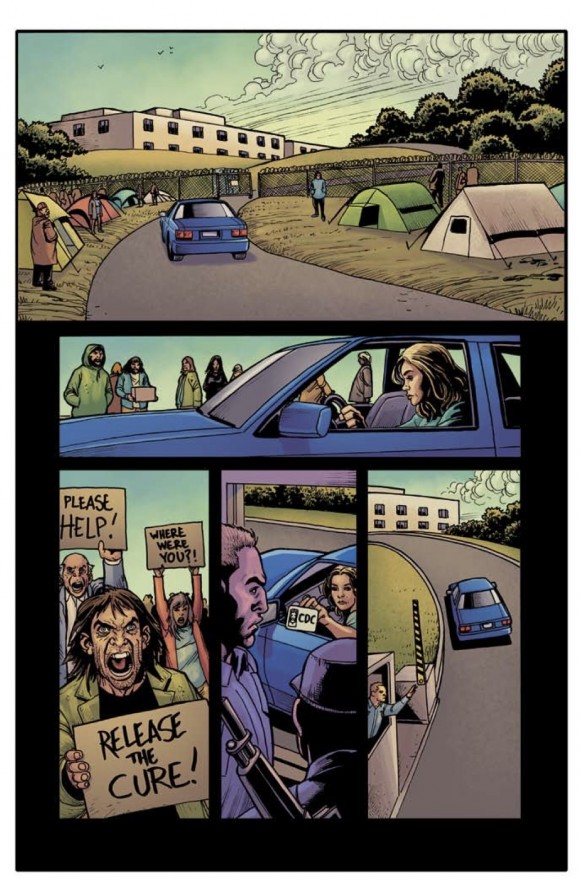 Had you seen the script when you wrote this?

Yes. Dafna and I went down to Fox last fall and read the script right there in the hallway. We tried to take as many relevant notes as possible, because we knew it’d be the last time we saw it. After that, we had a couple conference calls with one each of Dawn’s screenwriters and producers, where we talked about the parts of the new film none of us wanted to spoil, the big-picture timeframe and back story between Rise and Dawn, and batted around some rough concepts. They were very open to my thoughts and obviously knew the film’s world better than anyone else, so those conversations were almost as helpful as the script itself. From there I went off on my own and wrote a storyline proposal for approval.

So the main character, Ellie, is the Keri Russell character, right? What kind of parameters were you given in putting this story together?

Keri Russell plays Ellie, correct. My parameters were pretty loose. Of all the main characters, Ellie was, for whatever reason, the one I “got” the most as a writer. From the script and the phone calls I knew the tentpoles of her history and family story, so from there it was about finding the single most personal, important story to tell within those intervening years. I had a lot of leeway within that framework. What that most important pre-Dawn Ellie story would be…well, it just seemed to come naturally, and everyone else seemed to agree. We made very few changes to that original proposal before going to script. 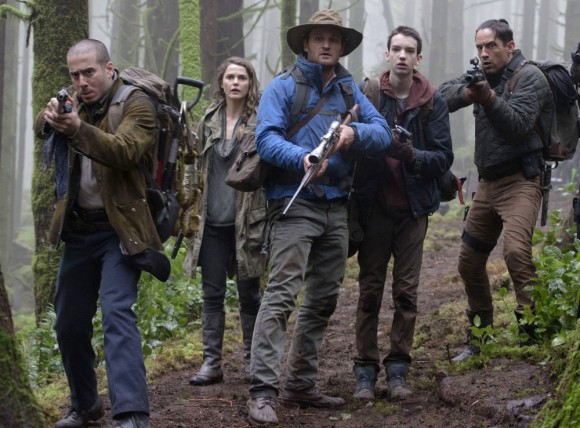 Ellie/Keri Russell with a bunch of spooked dudes.

Have you seen the movie yet?

I haven’t, actually, but as I said I’ve read it and it was fantastic. Lean and muscular, not an ounce of unnecessary fat on the whole thing. The relationships, the tensions, the set pieces … I can’t wait to see them all realized the way they sparked off in my imagination. Sometimes you read a script and it saps you of any desire to then also go and see the final film, but for Dawn, I think reading it and working within its universe have just made me want to watch it all the more. I’m very proud to have contributed in even the tiniest way to some people’s experience of it. 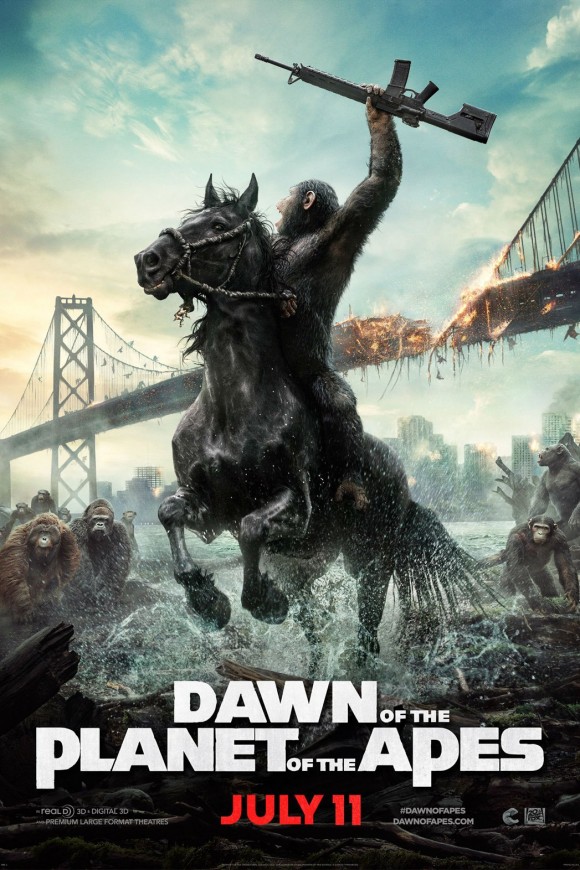 You an Apes guy? Just how steeped in Apes are you?

Yes and no. I’ve seen all the films, old and new, and read Boom!’s excellent comics within the universe, but not until I was an adult and had already become a professional writer. So I don’t have a nostalgia for it the way I might have if I had seen them when I was young. What I have instead is a respect, from one storyteller to another, about how good those films are to this day (Especially the original, Escape, and Rise), and how much potential there is in that universe to tell stories about both the good and bad of human nature through this once-removed lens of our cousin species.

Of all the Apes movies, what’s your favorite scene? Pick one. Just one.

You’re really making me strain my brain here. For me, I think it’s the opening 20 minutes or so in the original Planet, where they find themselves awakened by a crash and are just trying to figure out where and when they are. I love all the mystery … and all the potential. They could be anywhere. One day I’d like to put together an anthology called Variations on Charlton Heston in Space or something, where every story begins with those same 20 minutes, but what they eventually find diverges and varies wildly. I also love any scene with Ricardo Montalbán’s Señor Armando. 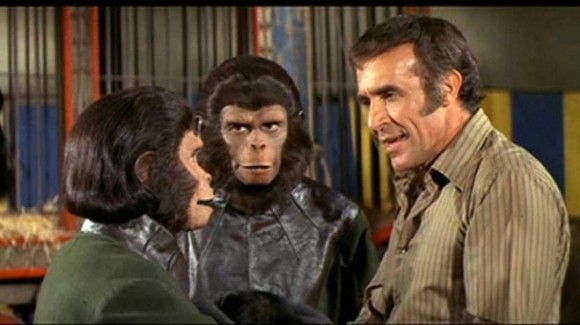