INSIDE LOOK: The Lost Video of JULIE SCHWARTZ’s ‘50 YEARS OF SUPERMAN’ Slide Presentation

Columnist PAUL KUPPERBERG lifts the cape on a trove of Superhistory… 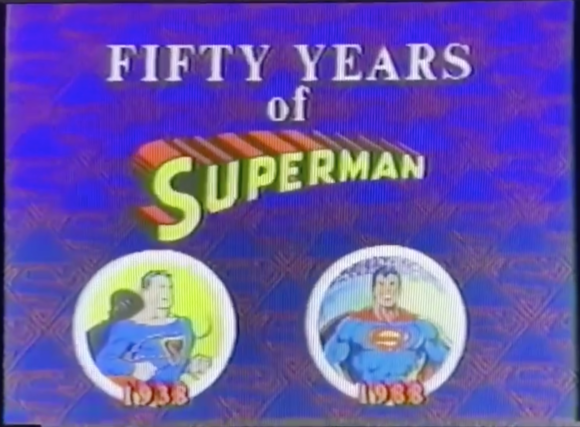 So as not to bury the lede: Join me and John Siuntres on his Word Balloon Live podcast on Thursday, Dec. 30, at 8 p.m. EST for the Internet World Premiere of the lost videotape of legendary Superman editor Julie Schwartz’s “50 Years of Superman” 1988 convention slide show presentation.

A collection of slides of the people and artifacts associated with the Man of Steel’s history, Julie delivered the “50 Years of Superman” presentation to at least two conventions in 1988. The first time was at the annual Chattanooga, Tennessee, science fiction convention, Chattacon XIII on January 16, 1988, which was where the videotape was shot by local fan and videographer, Ken Scott and his friend, Davis Pirtle at Schwartz’s request. According to John Jackson Miller, Julie also delivered it at Midsouthcon 7 in Memphis on March 19, 1988. 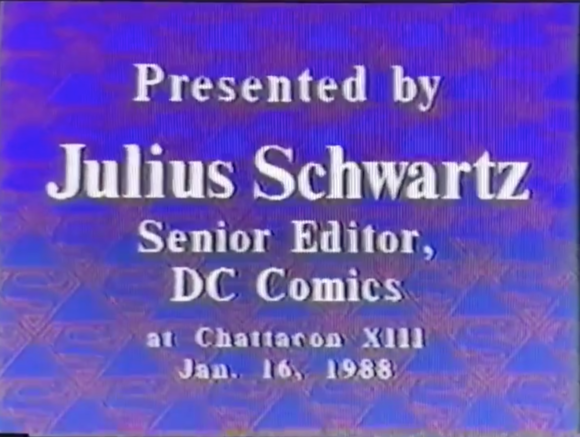 In response to a text Scott recalled, “A friend, Richard Lynch, knew Julie somehow, and said that Julie was looking to have the slideshow recorded and asked if I would be interested. Naturally I said yes. … The slideshow was recorded on two home-use VHS cameras, hence the poor audio quality. I took them to my work and transferred them to Betacam tapes for editing. Working on it on my own time, I created the graphics and put it together.”

The finished VHS videotape of his presentation ended up in Julie’s office, along with the three slide-loaded projector carousels, and sat there for several years, which was when I came into the story. Having written for Julie on all the Superman titles and other projects during the first half of the 1980s, I had become close with the legendary editor, architect of so many of my favorite childhood comics, and I made it a point to visit him in his Editor Emeritus office on his weekly visits to DC after his retirement, at which point I was on staff as an editor. 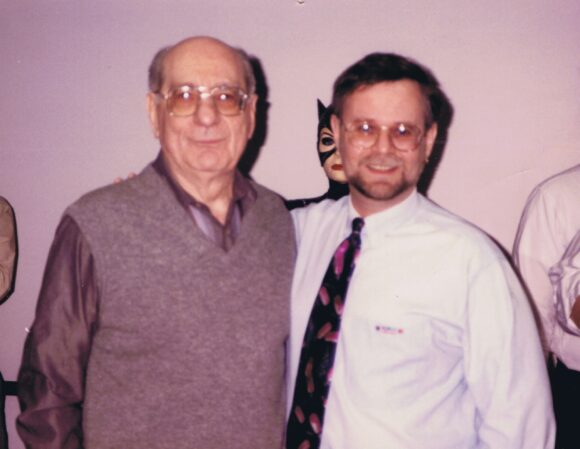 My visits to his office would often coincide with a bout of office clearing when he would be sorting through and dumping many of the artifacts of his 40-plus year career at the company. A lot of it was trash, but much was treasure that I, and others like me, found ourselves rescuing from oblivion, Julie having no idea of the historic value of what he was tossing. Many of the items I retrieved I turned over to DC’s library, but I kept a few, including that videotape. 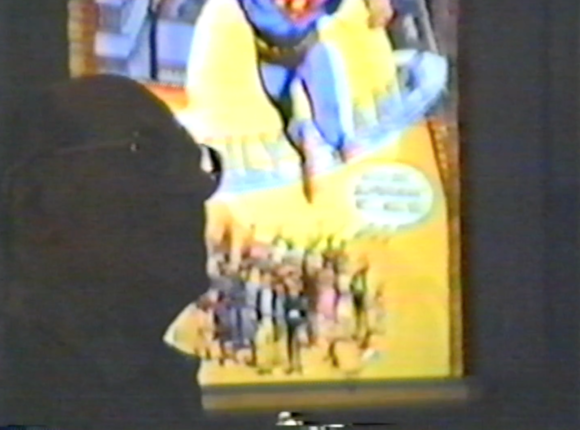 (Julie also saved those three slide carousels, which were sold through Heritage Auctions, which described the item as: “Julius Schwartz – Photograph, Slide, and Note Collection (1940-2001). Julius Schwartz’s legacy as the ‘Man of Two Worlds’ is documented in this incredible lot featuring slides, photographic prints, and hand-written note cards that detail Julie’s life in the worlds of SF fandom, comic books, and his work on the Superman character. Three slide carousels of approximately 300 slides capture Julie cavorting with such literary icons as Harlan Ellison, Ray Bradbury, Edmond Hamilton, Jack Williamson, Max Gaines, Jerry Siegel, Sheldon Mayer, and on and on it goes.” The lot sold for $920.) 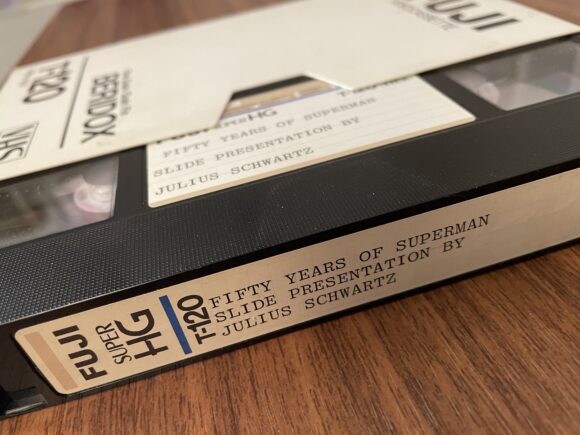 I filed the tape away and lost track of it until 2019, when it resurfaced and, lacking a functioning VCR (since about 2003), I put out a call on Facebook for a volunteer who could transfer the 30-year-old VHS tape to a digital file. That call was answered by writer and videographer Bob Singleton.

“Considering that it started with a 32-year-old VHS, it doesn’t look too bad,” Bob said of the results. “The color is better than on the tape, plus I high-rezzed up his final slide, and I added much clearer opening and closing music tracks. And our credits don’t look too shabby either.” Bob also crafted new end credits in the style of the Superman: The Movie titles. 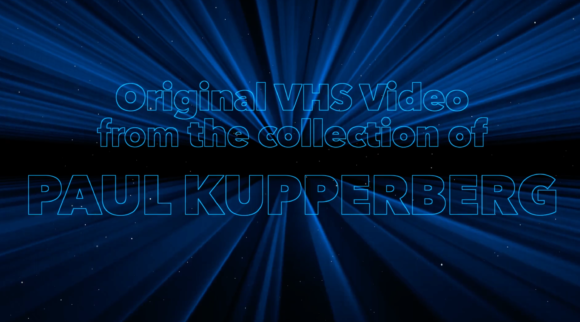 Beyond Julie’s original live presentations and a screening to a small audience of the new digitized version at 2021’s Terrificon in Connecticut, this is the first ever “wide release” of 50 Years of Superman. After the showing, the video will be posted to YouTube and available for future fans and scholars.

Word Balloon Live’s John Siuntres said, “This is a great glimpse into DC and sci-fi’s early years. So many people had a hand in the creation of Superman that don’t get their just credit. Julie was there from before the beginning and knew the whole story. I’m so pleased Paul chose my podcast to share it with the masses.”