INSIDE LOOK: Lou Scheimer, Ron Dante and the Birth of THE ARCHIES

Home » COMICS HISTORY » INSIDE LOOK: Lou Scheimer, Ron Dante and the Birth of THE ARCHIES 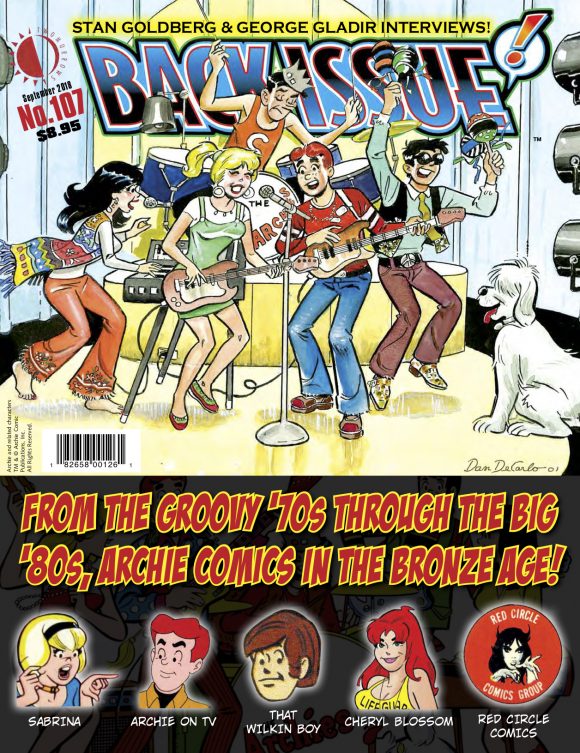 If ever there were a ’60s bubblegum-pop earworm, it’s Sugar, Sugar by the Archies, the prefab musical group concocted by Archie Comics, Filmation and rock producer Don Kirshner.

Well, the Archies take center stage in TwoMorrows’ Back Issue #107, which is dedicated to Archie in the Bronze Age (with some Silver Age thrown in). 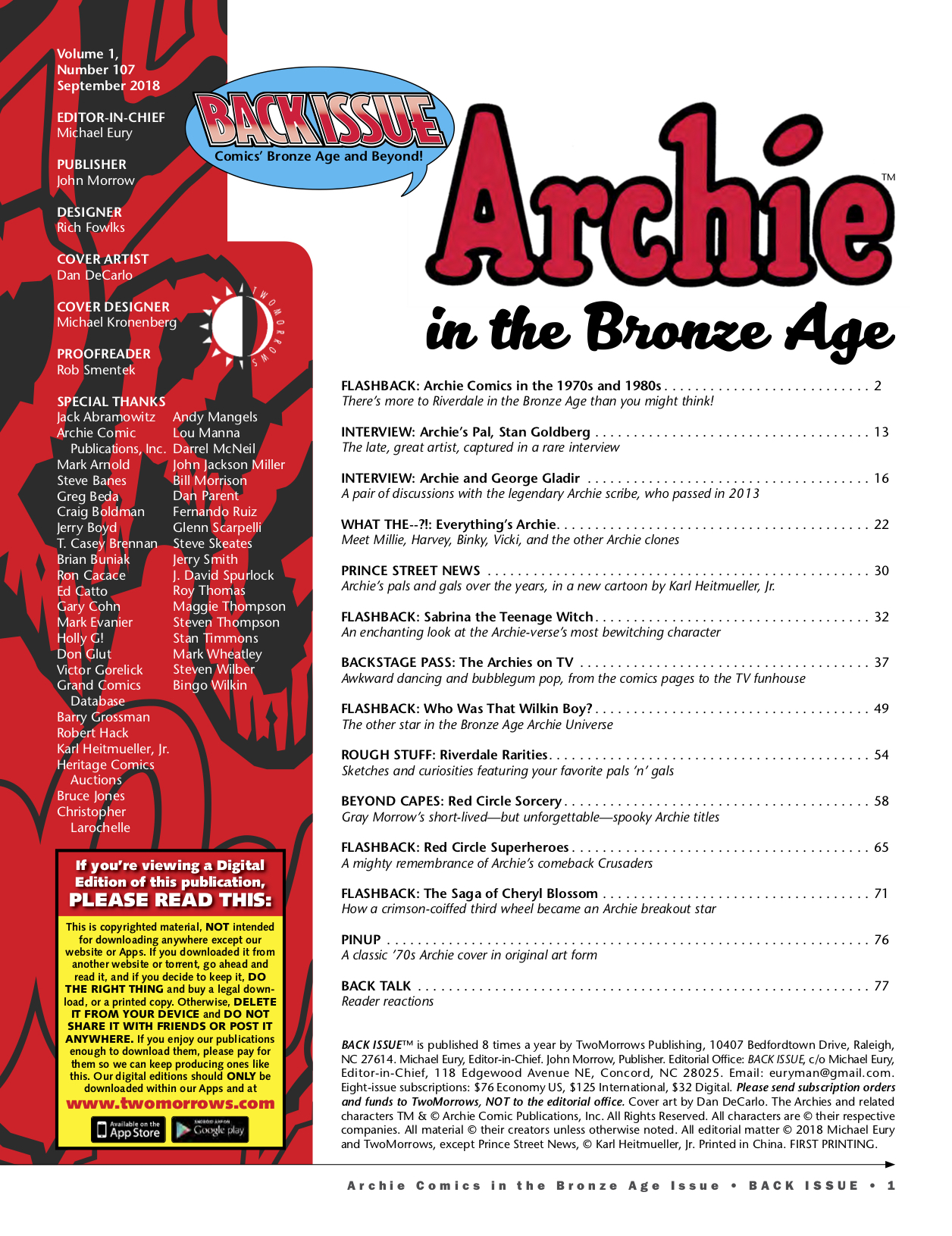 … and dig this EXCLUSIVE excerpt from Andy Mangels’ look at the launch of the Archies’ TV show and “band.” (By the way, Ron Dante turned 73 this week (8/22)! Far out!)

In 1965, Filmation had bluffed their way into getting the job to animate and produce The New Adventures of Superman for National Periodical Publications—now known as DC Comics—for a CBS Saturday morning series. When Superman was a massive success, Filmation began to expand into other animated fare for the new Saturday morning market.

Scheimer understood the value of “known” properties, and he and (co-founder Norm) Prescott approached movie studios looking for properties that could be turned into new cartoon shows. A second National/DC series, Aquaman, expanded and was paired with the Kryptonian hero for The Superman/Aquaman Hour of Adventure in 1967, and Journey to the Center of the Earth debuted as well. Then, another comic-book inspiration struck.

“The concept was brought to us by Irv Wilson, who was our agent at the time,” said Scheimer in my interviews with him for the 2012 TwoMorrows book, Lou Scheimer: Creating The Filmation Generation. “Irv had approached John Goldwater, who was one of the guys running Archie Comics, about licensing his books out for a TV show. Irv called me and said, ‘Do you want the rights to Archie?’ And I said, ‘What the hell is Archie? Is it something kids know?’ I had never seen the comic book, even though it had been around since 1942. I didn’t read comic books that kids were reading then, which was a mistake, and I didn’t know how successful a book it really was. He said, ‘Oh, God, Lou, every kid in the country knows what it is.’” 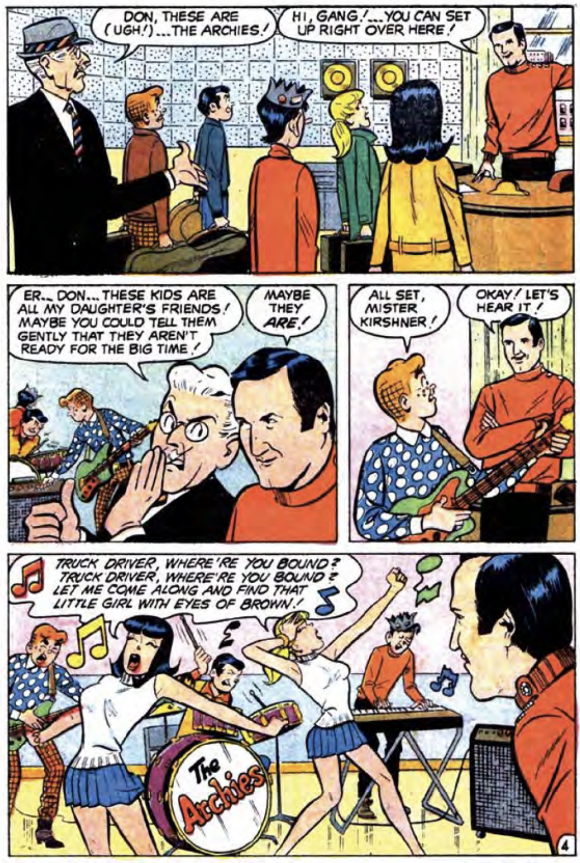 Thanks to Mr. Lodge, the Archies audition for record producer Don Kirschner in Archie #189 (Mar. 1969). Story by Frank Doyle, art by Harry Lucey.

(They ultimately presented the idea to CBS exec Freddie Silverman, who gave the green light.)

The Saturday morning scene, as Scheimer recalled, was “polluted with adventure shows, and there was nothing like Archie on the air. And then we got the idea to make music an integral part of the show. That was not being done for children’s shows; it became the first time that a children’s show had a group created for them! The Beatles had been adapted, but it wasn’t something new; it was just taking their already existing music and using it.”

At about the same time in spring 1967 that the Archies were introduced as a singing group in the comics—about six months before Filmation was offered the franchise to develop—music producer Don Kirshner was breaking up with the recording group he had been instrumental in turning into a hit: the Monkees. Filmation’s Norm Prescott saw an opportunity, and called Kirshner. If he wanted to create the musical success of the Monkees again, he could do it, free of them, Columbia Records… or even real people!

The new CBS series was titled The Archie Show. The series was developed to have two eight-minute stories, a three-minute musical segment, and other “how to dance” or short joke segments. The musical segment would feature the Archies as a band, singing a pop song. Because that music wasn’t specific to any of the plots, Kirshner and his team could work on their own, independent of the animation or storytelling process. And they wouldn’t have to deal with visibly recognizable singers whose success might go to their heads. 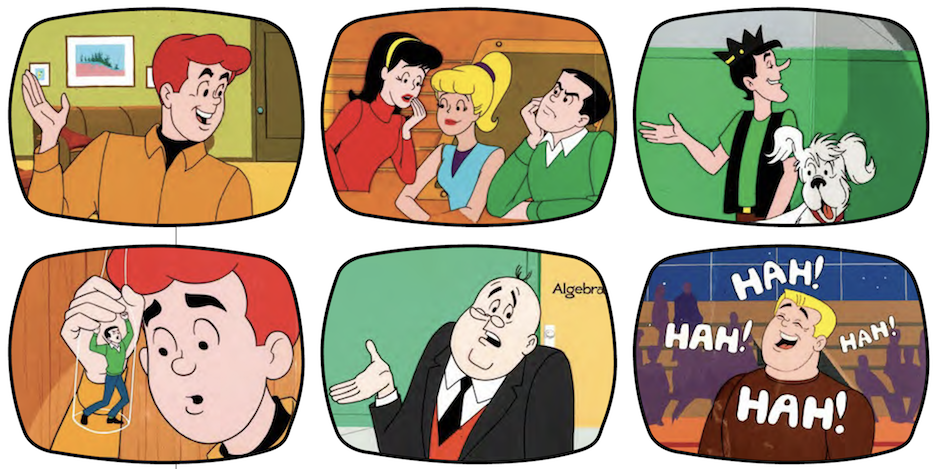 Unlike the National/DC shows, Filmation didn’t use any of the writers who actually worked on the Archie comics. Scheimer instead hired comedy writers for the series, many of whom had worked for radio or television comedy or variety shows.

“For the most part, we took everything directly from the comics,” recalled Scheimer. “The characters were warm, soft, and friendly, and kids could relate to them. We had Archie Andrews, his buddy Jughead Jones, his rival Reggie Mantle, and the two lovely girls that Archie and Reggie were after, Betty Cooper and Veronica Lodge. And then there were their various parents and teachers at Riverdale High.”

For the series’ voice cast, Filmation tried to find the radio voices from the series, but was unable to find them; for some reason, even Bob Hastings, who had worked with Filmation, was unavailable. Scheimer and Prescott instead cast character actors from television.

Archie and Hot Dog were played by Dallas McKennon, a scruffy, wild-bearded 49-year-old who had previously been the voice of Gumby. Hanna-Barbera regular Howard “Howie” Morris was Jughead, whom Scheimer considered to be the real star of the show.

“Archie was always the good soul, doing things right, keeping people happy, and falling in love with two girls at the same time. But Jughead provided all the fun. He did everything wrong, and somehow he came out right all the time.”

Filmation veteran Jane Webb handled both Betty and Veronica. Having started in radio as a teenager, Webb had done voices for the radio show Tom Mix, which Scheimer had listened to growing up! John Erwin, who would later voice Filmation’s biggest hit character He-Man, took his first job for the company with Reggie. Scheimer noted that Erwin was “very, very bashful. John was extraordinary, and he created a character for Reggie Mantle that you couldn’t create just by drawing.” 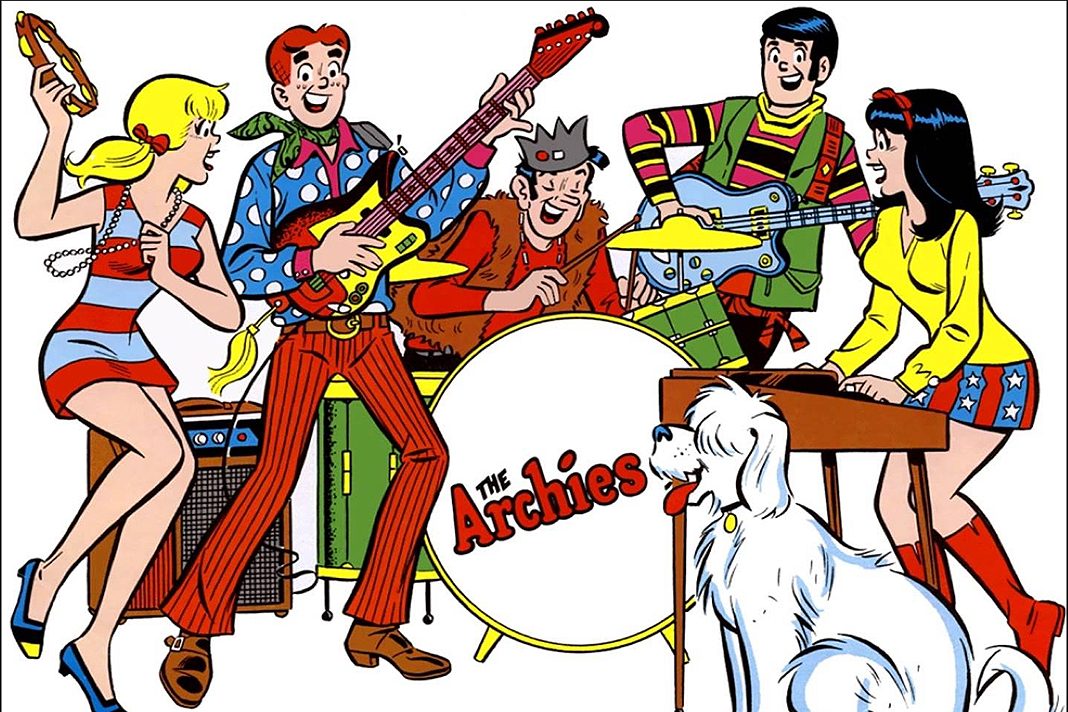 While Scheimer worried about producing the animation, Norm Prescott worked with Don Kirshner on the songs.

“When it came to the songs, we’d tell Kirshner what we wanted to do, what the attitude should be, and what kind of stories we were doing, and then he would produce the songs and deliver them to us whole,” Scheimer said. As noted, the show needed three-minute catchy pop songs, as well as brief segments that would teach kids to dance. Scheimer recalled that the music scenes were “kind of like early music videos. We’d show the Archies playing their guitars and drums and singing, and there would be groovy effects behind them. We also taught a ‘Dance of the Week’ which were some very weird dances put together by a bunch of animators who were not teenagers… and probably not dancers either.”

Kirshner worked with several songwriters—some of whom had worked with the Monkees—including Jeff Barry, Richie Adams, and Mark Barkan. Prescott then hired a group of singers and musicians to “be” the Archies. The lead male voice was mostly done by singer Ron Dante, and the lead female voices were initially sung by Toni Wine. Producer Jeff Barry did the singing voice of Jughead for some songs. Other background voices included songwriter Andy Kim, as well as Ellie Greenwich, Susan Morse, Joey Levine, Maeretha Stewart, Bobby Bloom, Lesley Miller, and Jimmy Rooney. 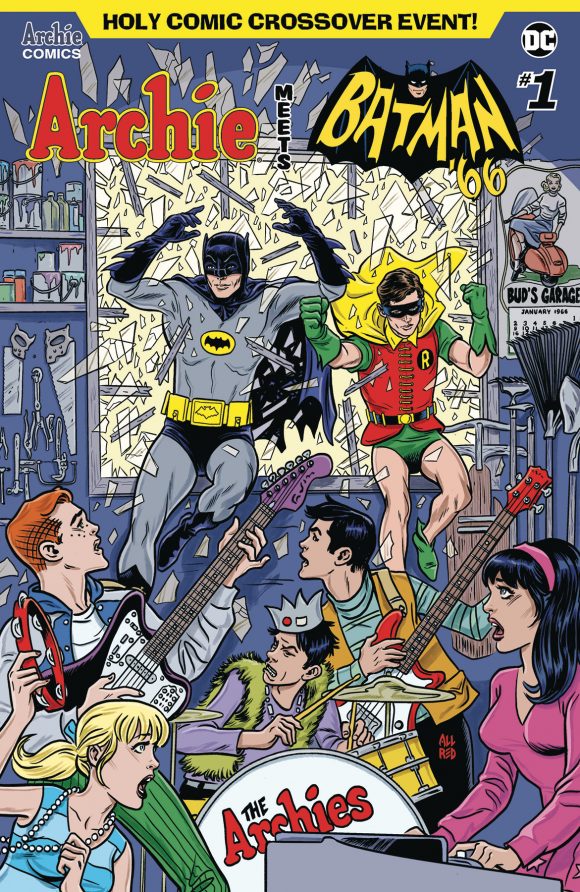 Match made in Kitsch Heaven: Archie Meets Batman ’66 #1, which came out earlier this summer.

“When I was asked to be an Archie by Don Kirshner in 1968,” Ron Dante told me in a 2007 interview, “I had a feeling the Archies would be a big hit. He was a wonderful producer and entrepreneur. He took in a lot of great writers and singers and when I recorded for the Archies as the lead singer, I was very happy to know that someday it might be a hit years later. And it has been for the last 39, 40 years; it’s been a big hit!”

Dante had read Archie comics growing up, and was primarily a commercial jingle singer in the 1960s. “I remember my audition for the Archies was a phone call from Jeff Barry, the producer. He said, ‘Come up to the RCA studio in New York, and, I want you to sing a few songs. This is for a TV show.’ So I rushed up, and I remember the first audition that Don Kirshner was there, Jeff Barry, and they asked me to sing different types of songs. And especially one song that Jeff had written called Truck Driver. And I used a soft voice, I used a heavy voice, I sang like Elvis, I sang like the Beach Boys. Finally, they settled in a Donovan type of voice that was very popular at the time, so, that was the first audition. I remember after about an hour I got the job and I was thrilled.”

As for how he crafted the Archie vocal sound, Dante says that “putting the voice of Archie together was very easy. I had seen the comic, I knew exactly what he looked like, I knew the kind of feel the songs were coming up with, so when I put the voice together, I knew it would be for a preteen or young teen audience. So I wanted it to be innocent and very accessible to that crowd. And that’s the kind of voice I used. I never met the guy who did the actual speaking voice in Los Angeles. All the music was done in New York City, and we did it before they even drew the cartoons. They would do the songs, send them out to Los Angeles, then they would do the animation to our song. So, it was a wonderful process because every Saturday morning I got to see what they had done with my song and my voice the previous week.”

The Archie Show debuted on September 14, 1968, at 10:00 a.m. on CBS. It was a huge hit, eventually getting a massive 47 rating regularly in the 2–11 age bracket, and eventually sold to a whopping 71 foreign countries to air! The Archies album was also a monster hit.

“I remember that the radio deejays were very resistant to playing the Archies,” said Scheimer. “But we kept getting radio play, despite… there being no live-action ‘face’ for Archie.”

Back Issue #107 is on sale now at your comics shop or directly through TwoMorrows. (Click here.) Oh, and do yourself a favor and check out Wilson Pickett’s cover version of Sugar, Sugar.