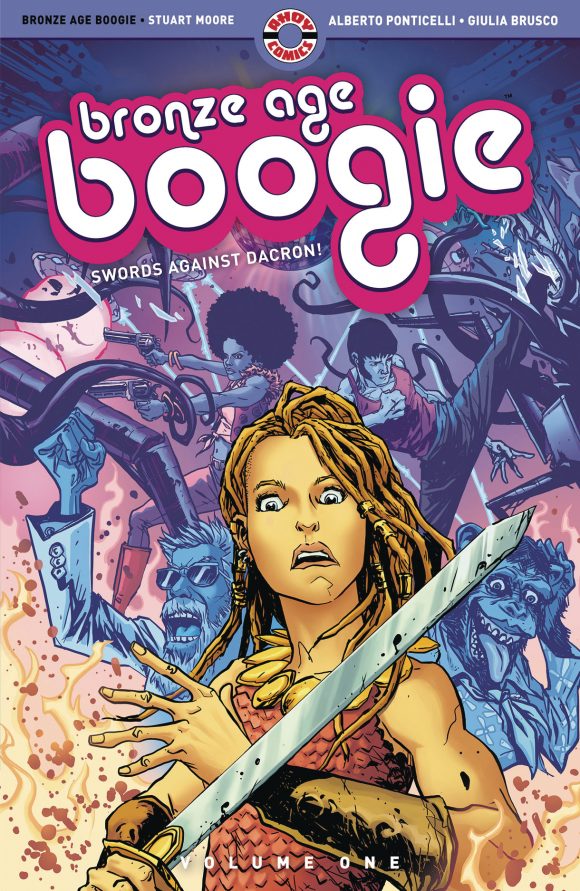 When the folks at AHOY Comics say you can “Expect More,” they mean it.

In my mind, there’s no better small publisher in comics today than the folks who bring you titles such as The Wrong Earth, Edgar Allan Poe’s Snifter of Terror, Planet of the Nerds (soon to be a major motion picture!) and the ’70s-soaked adventure satire Bronze Age Boogie.

The first trade for Bronze Age Boogie — Swords Against Dacron! — by writer Stuart Moore and artist Roberto Ponticelli, is out now and I urge you to pick it up because it brings you the kind of entertainment you deserve. The kind you can “expect more” from – because it delivers.

So, in that spirit, we bring you this EXCLUSIVE COMMENTARY on several pages from the opening chapter by the book’s creative team — including layouts and pencils.

By STUART MOORE and ALBERTO PONTICELLI

Stuart: Welcome to Bronze Age Boogie! This book is inspired by a lot of 1970s pop culture, ranging from barbarian comics to exploitation movies to kung fu action. At heart, though, it’s the story of Brita Constantina, a teenage barbarian girl who swings a mean sword but longs to visit the future — 1975, to be exact. Which brings us to the first page… 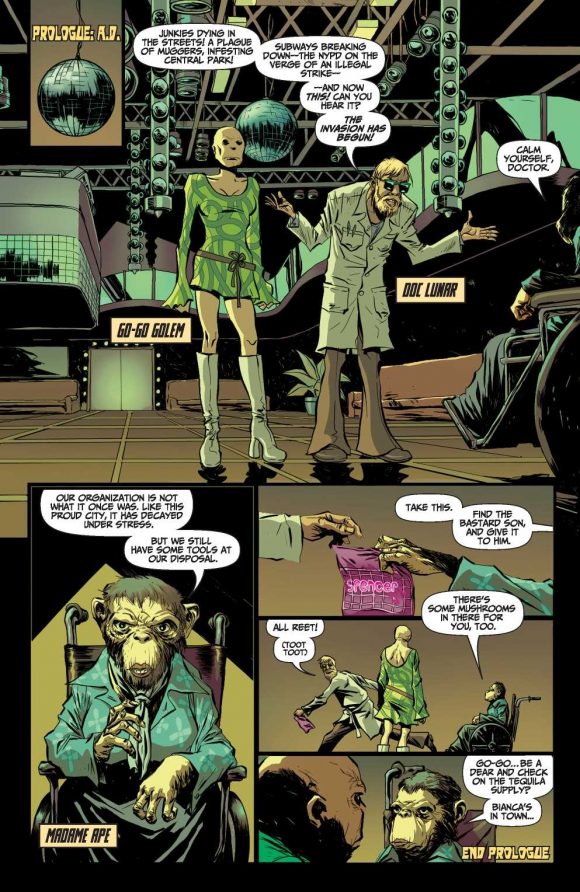 Stuart: This was a fun page for me—I hope it worked for everyone else. Originally the first chapter was going to take place in 1975, but we wound up restructuring the story and reducing that sequence to a prologue and an epilogue. So I needed Doc Lunar’s dialogue here to paint the picture that we wouldn’t really see until the end of Chapter 1: a city in crisis, plagued by urban decay and teetering on the edge of bankruptcy. 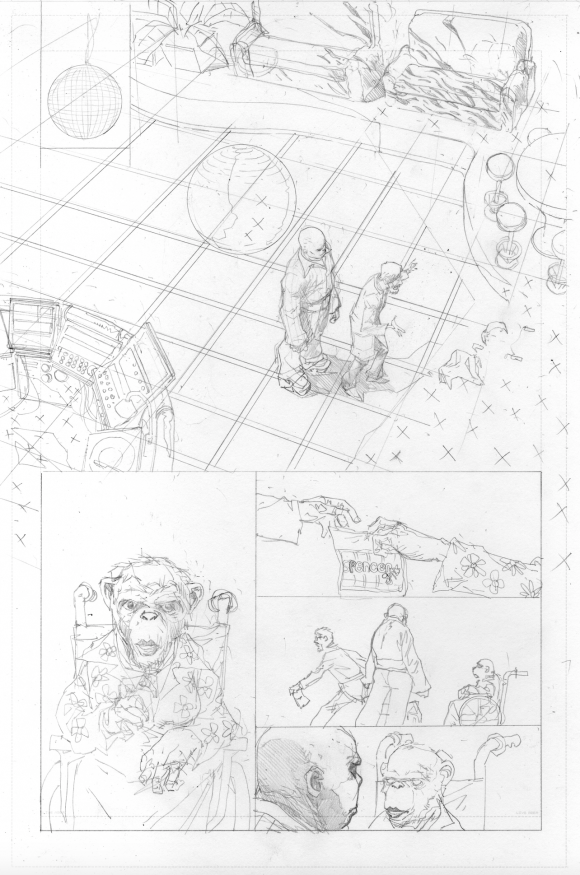 Alberto: The story starts in a typical discotheque from the ’70s, so I immediately thought about Studio 54. It was so famous those years; a lot of famous and eccentric people used to go there and have fun.

So I started looking for references in order to feel the mood of that place. I started drawing a bird’s eye view, as I wanted to recreate the right atmosphere. Stuart liked it, but we thought we didn’t give the right room for the characters, so we changed the first panel in what you see in the trade paperback. 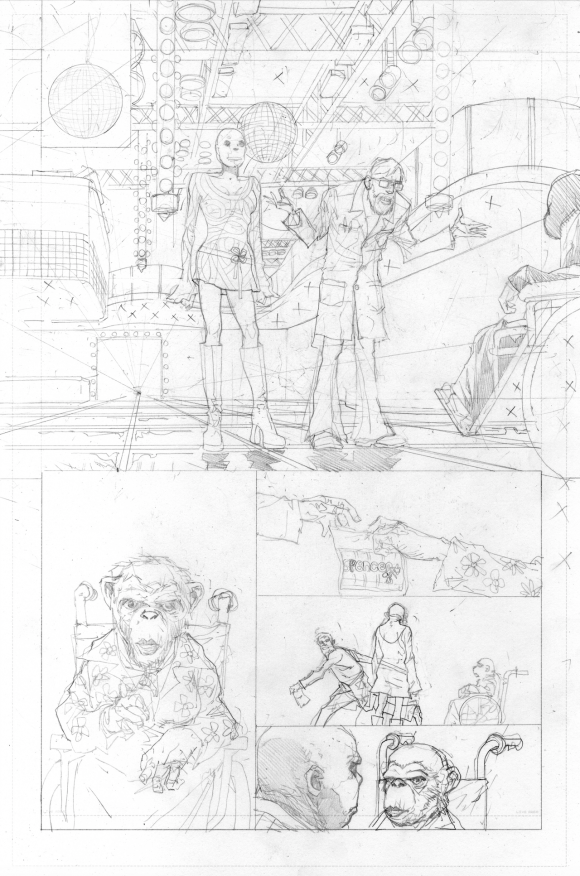 Stuart: Madame Ape was originally called Seeker Ape. She was going to be more of a stoner, a sort of alien gone native on Earth. I like the Mrs.-Madrigal-ish mother figure she evolved into.

Incidentally, the working title of the series was 1975 B.C. So the caption at the top originally just read PROLOGUE: A.D., because 1975 would have been splashed all over the cover. I think that was the last correction we made before publication. (See the color page above.) 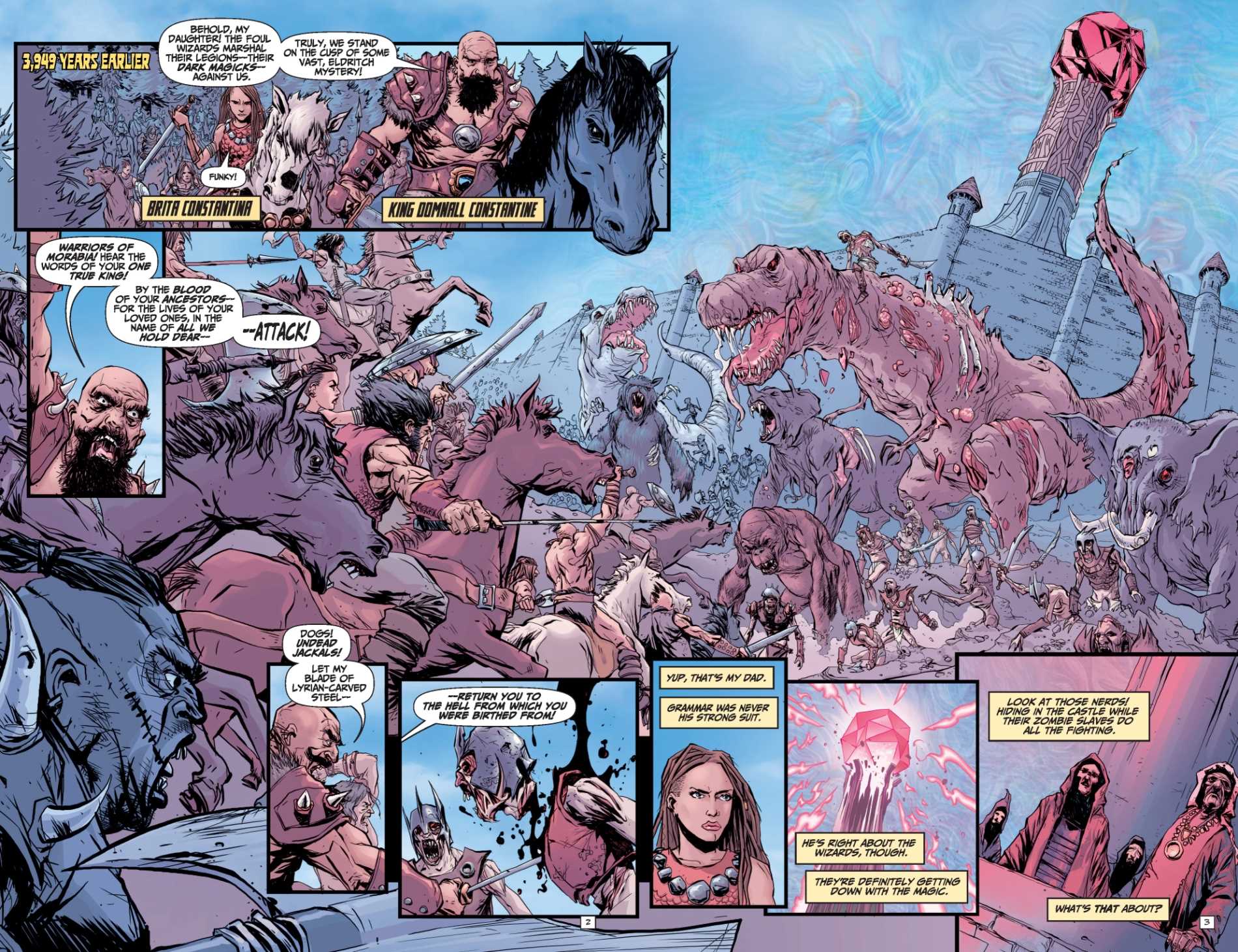 Stuart: Now we jump into the thick of it, a battle between barbarians and zombie dinosaurs under the command of some powerful but clueless wizards. In other words: comics!

When I first planned the story, Brita’s role was much smaller. She just sort of took over. Who doesn’t love a smartass teenage barbarian who can hold her own with her dad’s finest legions?

Incidentally, some reviewers thought “3,949 YEARS EARLIER” meant that this sequence took place in 1974 B.C. Nope — it’s 1975. Do YOU know why? Answer at the bottom of this article.* 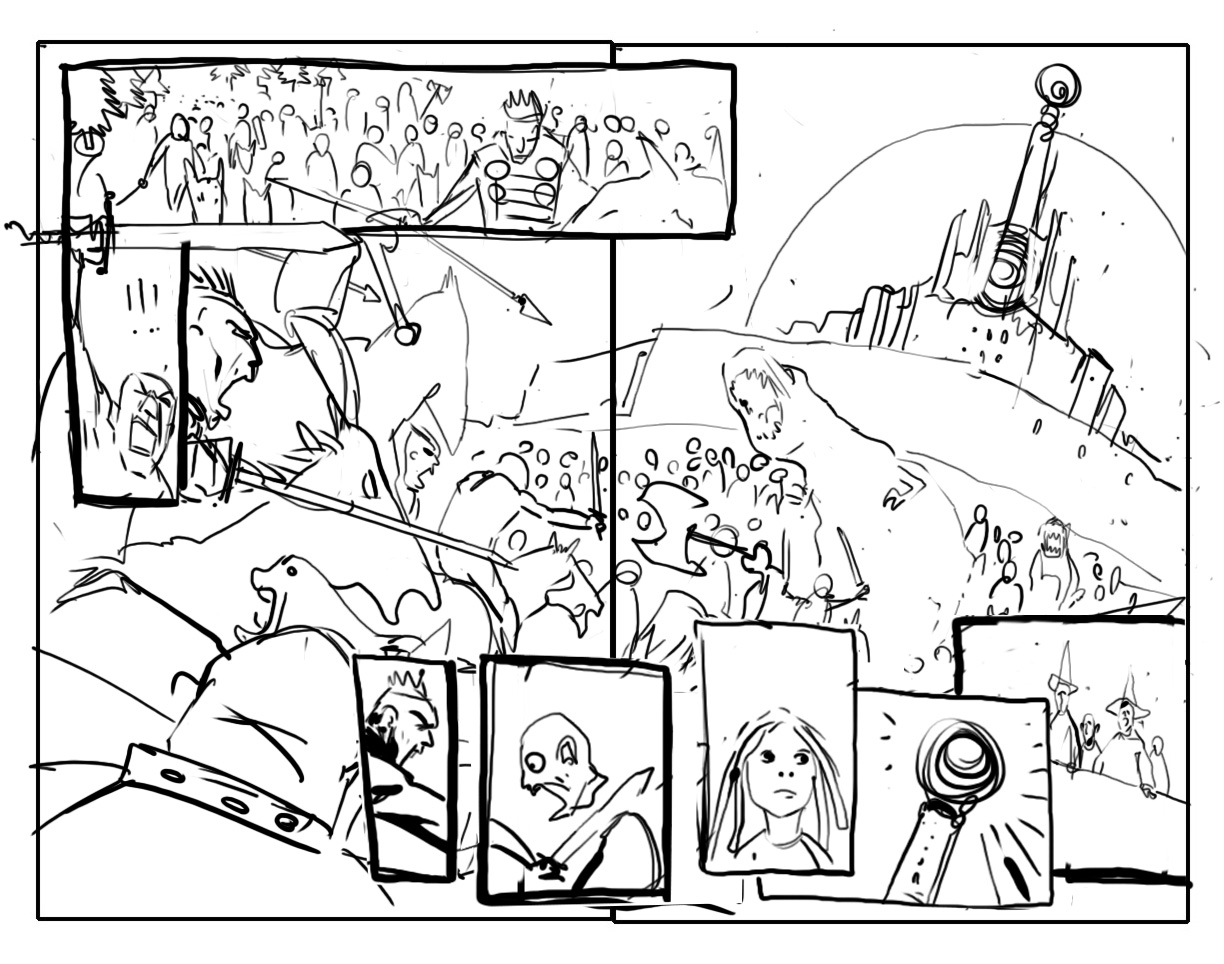 Alberto: This was double tricky: I had to introduce many characters for the first time, as well as the castle at the same time. Plus, I had to recreate the mood of a savage battle.

Actually, it was a ton of fun! I tried to imagine myself, the reader, in the middle. The first thing to show was the mood of the entropy, so I tried to have a slight fisheye in order to have a three-dimensional overall point of view. I let every character do something different, taking care of the barbarians’ point of view, like they—we—are going into war against… well, monsters, zombies, rotten animals, wizards, everything! I can’t believe Stuart had such a sick idea — I think he’s crazy, I love him! 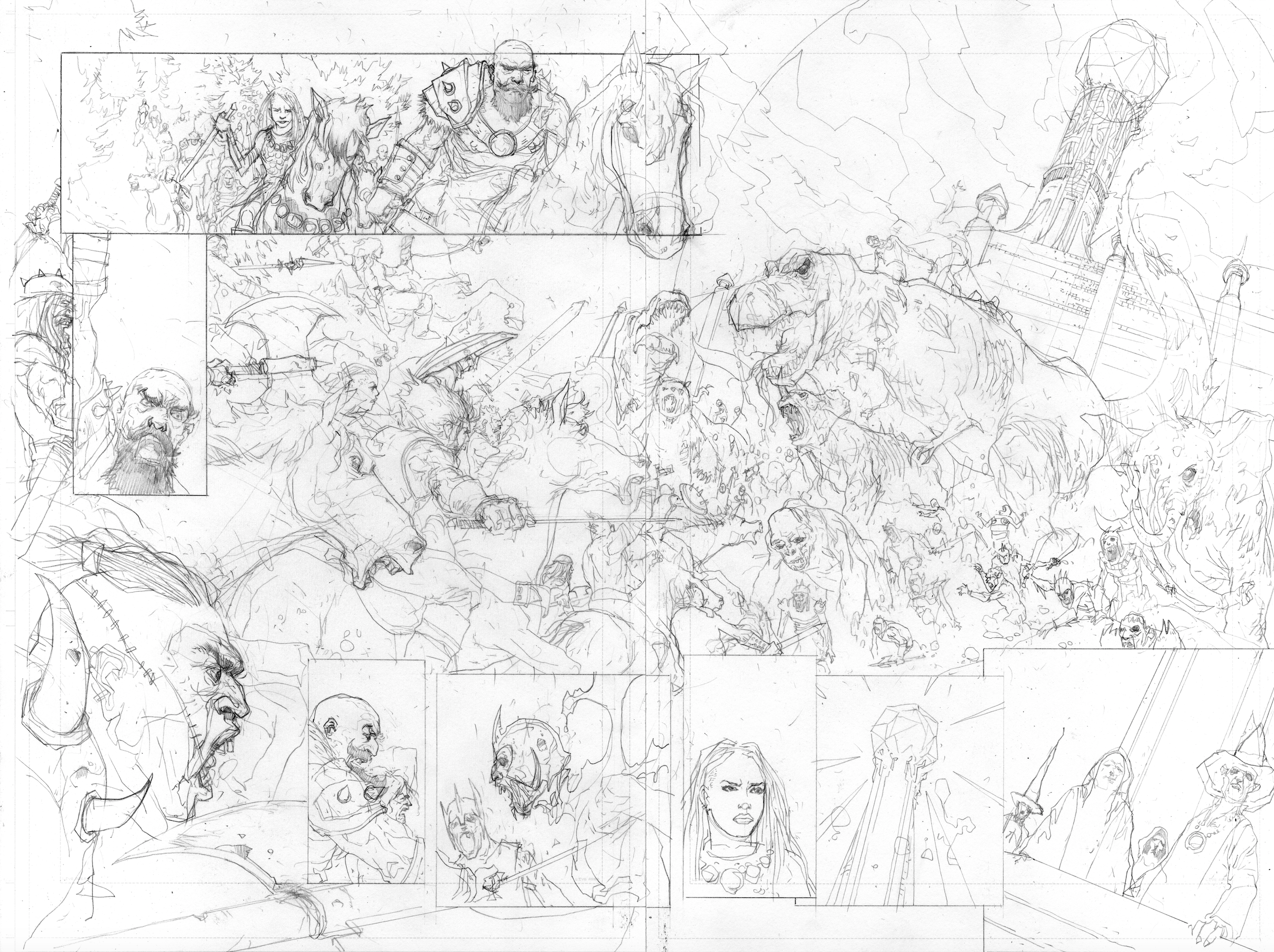 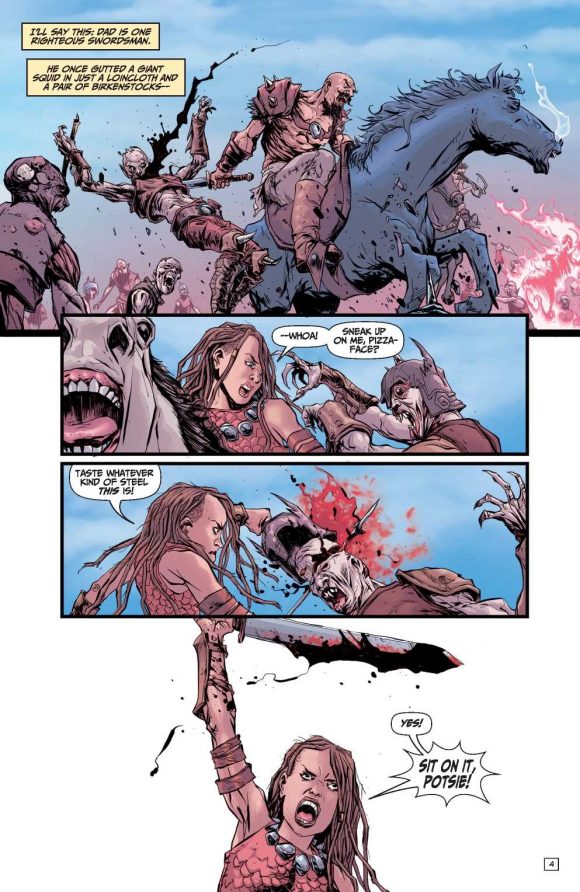 Alberto: I remember I read about Barry Windsor Smith’s dynamic art. He recreates the dynamism using only the movement of the bodies and the composition. If they are right, you can feel the action without using kinetic lines.

I was always fascinated by that—I also love combat sports, which I’ve been practicing for decades, so I tried to show the action using the bodies and their body language. In order to do that, you have to think about the body: it moves to serve the power of the arms while they shoot.

Here’s another way to think of it: when you box, you don’t throw your arm against the target; you use your body and only at the end do you finish the shot with the arm in order to have more power. So the bodies here are always de-placed, like they are falling against the shots, if that makes sense. 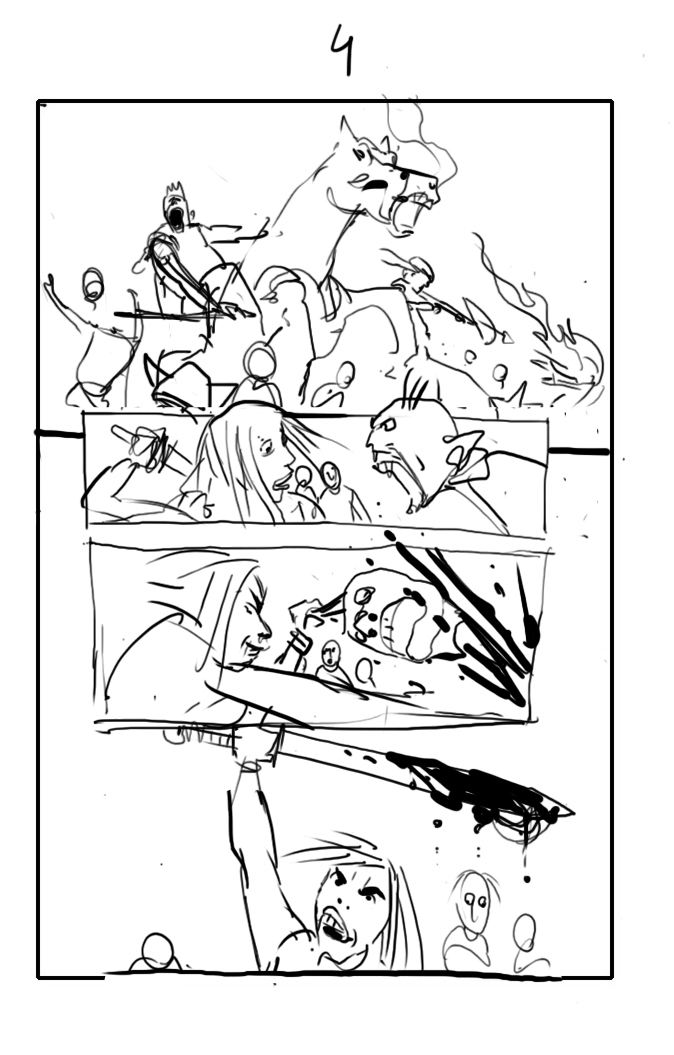 On a story level, this is where we really get the point that, barbarian or not, Brita has some strange knowledge of times beyond her own. 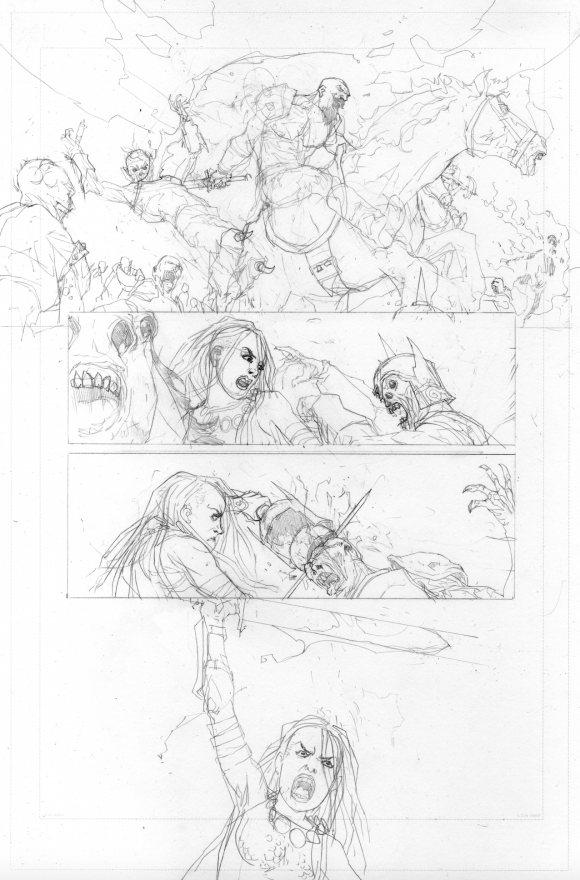 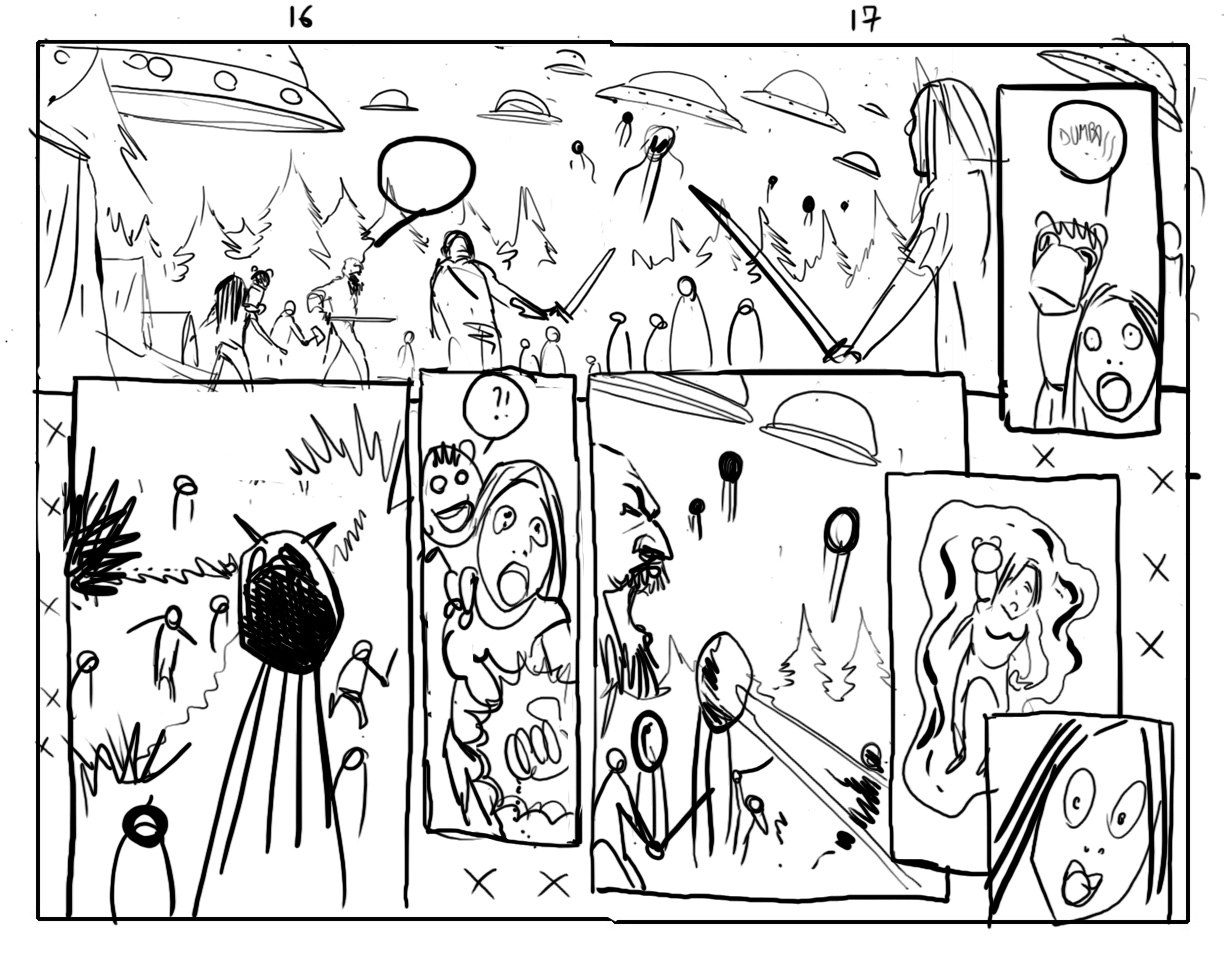 Stuart: Jumping forward a little: This is our first look at the Martians. Alberto fit a hell of a lot of story into this spread… I really like the way it flows. Giulia Brusco absolutely killed it on the color, too. You can almost feel that chill night air.

Alberto: Another party here! I tried to change the point of view in every panel, and all the panels are attached to each other, just to give the feeling that everything is happening at the same time—and entropy, again, is having fun! This is because, well, Martians are attacking the barbarians (pretty weird, huh?).

Stuart: As for where Brita winds up — well,  you can probably guess. But if you want to find out her fate and that of the others (including her monkey pal Sniffer), you’ll have to buy the book. 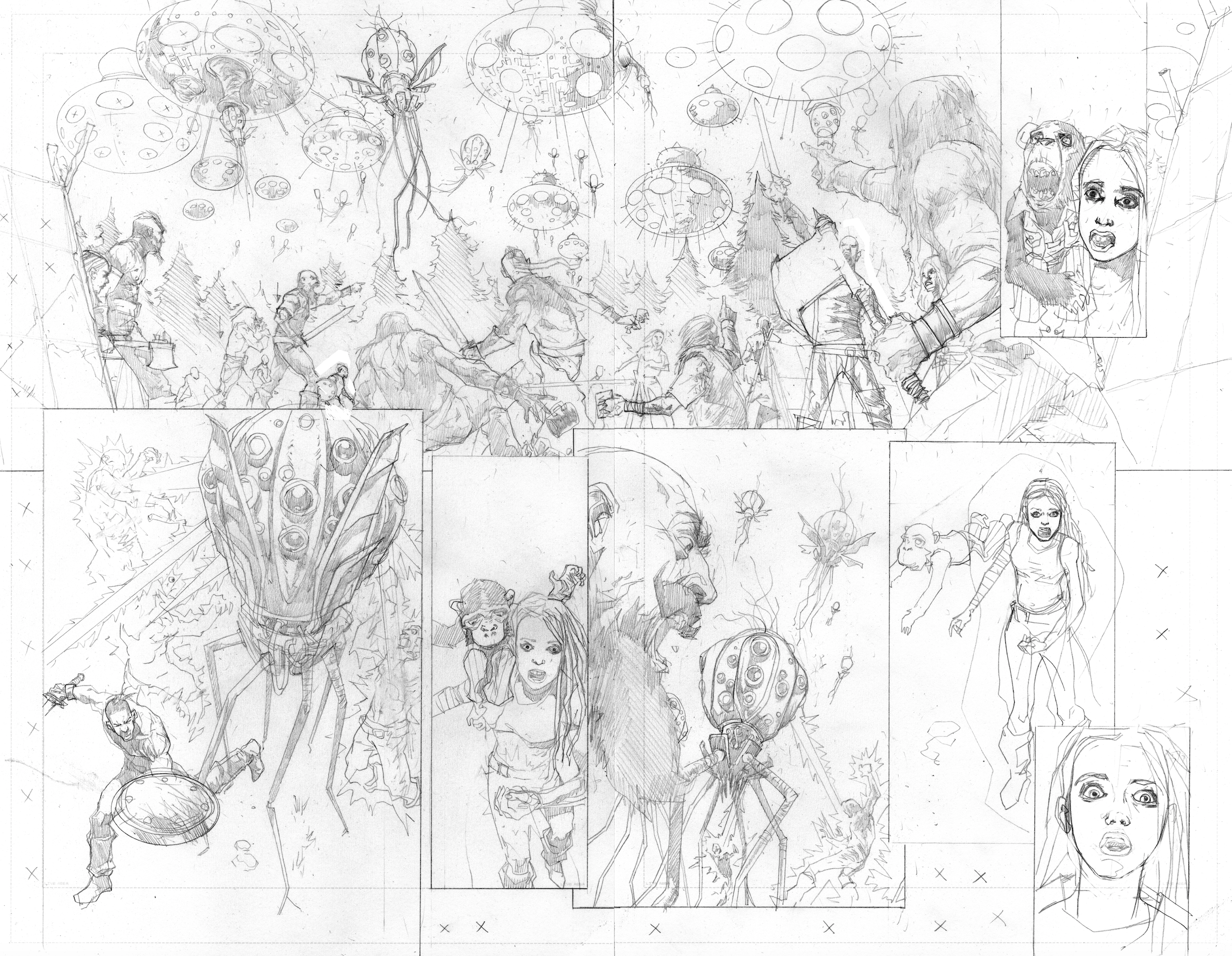 ** If you think THAT’S confusing, wait till you see the math I had to do at the beginning of Chapter 4, when we flash back to… oh, just read it.

Bronze Age Boogie is out now from AHOY Comics. It lists for $17.99 and you can get it at your local comics shop or fave bookseller.