In Its End Is Its Beginning – Sandman: Overture Changes Comics For Us This Week

Home » In Its End Is Its Beginning – Sandman: Overture Changes Comics For Us This Week

I’m sitting in a classroom on an autumn day. The leaves are golden outside and it’s a little bit rainy. My friend is sitting across the table. He brushes aside his mane of long red hair and his death metal T-shirt looks like it might have been washed, leaving new holes in it. He’s looking at me pleadingly as he extends both arms across the table holding out a book in large format with a glossy cover. I’ve never seen a book in a format like that before. “It’s a graphic novel,” he explains. I’ve never heard the term and it seems like he means something violent is contained in the pages. “Please”, he says earnestly, “you have to read this. I just know you’ll like it. People get their fingers cut off. It’s awesome.” If he didn’t look so serious, I would laugh. I try to take him seriously, but at the moment I’m very worried about being taken seriously. I’m an American in England preparing for my university exams to be an English major. I look at the book, and his hands. Then the teacher comes in with books of poetry and that seals the deal. No way. Sorry, friend. I will not be reading Sandman. It was his third and last attempt to sway me. 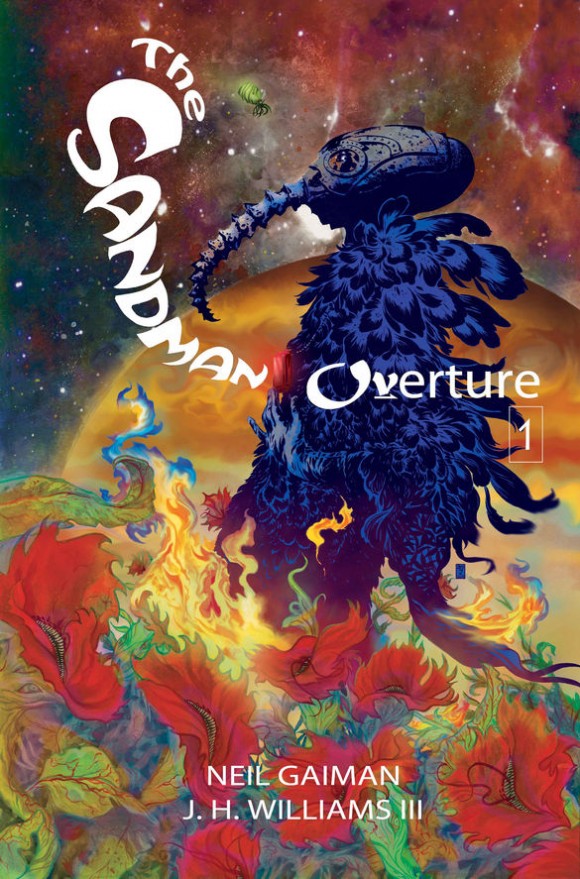 That moment will haunt me forever because it could have changed my life. I was on a decades-long hiatus from comics that would take me well into adulthood. When it comes to Sandman, I’ve lived my life backwards and I’ve become even more aware of that in the lead-up to the release of Sandman: Overture, drawn by the great J.H. Williams III with covers by both him and Dave McKean. At San Diego Comic-Con this past summer, I sat in a crowded room typing furiously to capture the tiniest shreds and hints of what the new mini-series would contain, and was inundated with visually overwhelming and magnetic preview art by Williams, and the fact that Overture is a prequel to Neil Gaiman’s Sandman series, which originally ran from 1989-1996, set off strange, resonant alarm bells in my mind. For me, a prequel is just what I need, since that takes me back to before the beginning of the series and helps explain my return to comics, a return that’s changed the course of my life.

I’m standing in an airport bookstore in Florida waiting for a return flight home, and I’m aware that something major has happened to me, which is a little terrifying. Three days beforehand, also in an airport bookstore, I had picked up a thick graphic novel called Watchmen, the first time I had purchased comics in 15 years. I spent the down times at my conference reading it in my hotel room and developing a terrible crick in my neck from reading the pages too closely. Conversations about Watchmen over drinks with colleagues had given me an eerie feeling that I would start writing about comics. Now, in the bookstore, I spot a single book by Neil Gaiman. It’s Sandman: The Dream Hunters, illustrated by Yoshitaka Amano and it has a scintillating gilded cover. I start to put it back on the shelf because my luggage is already really heavy. I see the word “Sandman” on the cover and remember my friend in the classroom in England. I buy the book. It is the final tale in the Sandman universe so far, a follow-up and an untold story of protagonist Dream interlaced with Japanese folklore. I read it on the plane and by the time I arrive home from my trip, my life has taken a two-pronged TKO and it’s time to start reading — really reading — comics and taking them seriously. 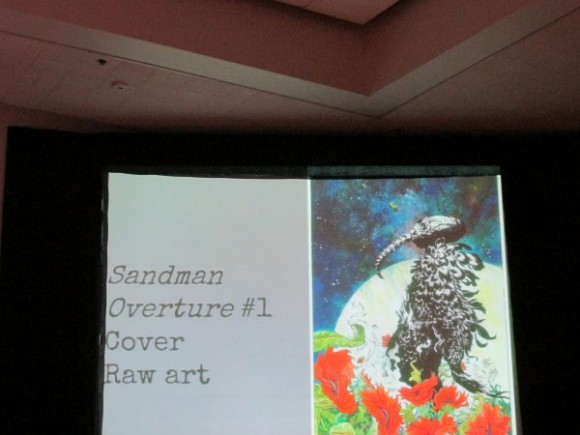 To say that I was a latecomer to Sandman is an extreme understatement, especially given that I’m of the prime generation to have followed its trajectory and even benefitted from the one-stop-shopping of collected trade editions right away. But I’m well aware that it’s my own fault and I’m just glad that I didn’t miss that boat and that it became a big enough cultural phenomenon to finally catch my attention. Aware that I had started reading Sandman at the end, I proceeded to read the trades in reverse order, maybe as a kind of exacting penance for my tardiness, but at halfway through them, I switched to the beginning and ended up “finishing” the reading project at the mid-point of the series. Then it all came together and I sat back and considered the monumental series as a whole. Then I bought every single issue in order and put them in a longbox. Then I bought the first-edition trades. Then I wrote several scholarly articles on Neil Gaiman’s work. Then I pitched a book on Neil Gaiman’s early career to Sequart Research & Literacy Organization, a pitch that was accepted. Then, I figured there was something else more immediate I ought to do about comics given that they had transformed my life, so I became a comics journalist. This all happened in about the space of a year, experiencing Sandman from its last pages to its year zero pages. 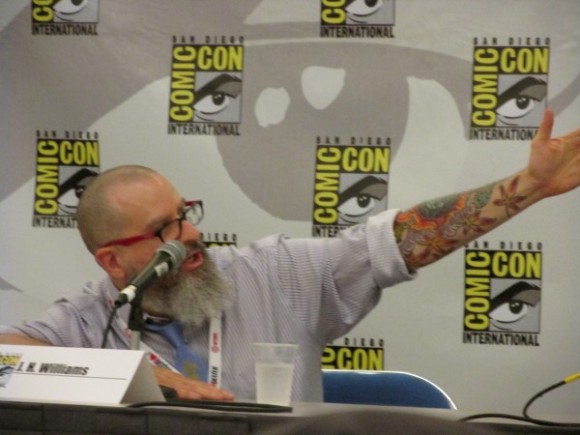 Less than a year afterwards, I was sitting in a crowded San Diego convention hall looking at previews of the Overture art and hearing J.H. Williams III’s gravelly, heart-warming voice. He explained the delightful madness behind his ideas and just where Overture was headed, which was far, far, into the unknown of the Dreaming, the elastic subconscious realm of Dream and the zone in which human beings mostly encounter him. Williams said that Overture will contain many science-fiction elements that echo the influence of pulp novels, and that Dream will frequently appear wearing his insectoid “helm,” which may give him a fairly alien appearance for readers, challenging their expectations. The science fiction feel to the book will be challenging as well, since though there have been plenty of sci-fi elements in Sandman before, particularly when it comes to the creation of worlds and the cosmos, this seems to be the first time that sci-fi implications will take the drivers’ seat on the comic. That seems even more appropriate when you consider the context of a Sandman prequel that handles a time before time in many ways. The series will have an overtly epic scale and often present Dream moving in large, exotic landscapes, Williams said, even more than in previous Sandman work. From what I saw, Dave Stewart’s colors on the book are also going to be simply overwhelming, contrasting, and mentally invasive in a profound way.

Hearing Williams’ ideas, and seeing some of the cover and interior artwork for Overture was a little terrifying. It was as terrifying as opening the first pages of The Dream Hunters and realizing that the book was going to push the limits of my imagination, shake things up, and make me think not just of comics, but of life, differently. You can’t “unsee” things that operate on such a high level of thought and art. 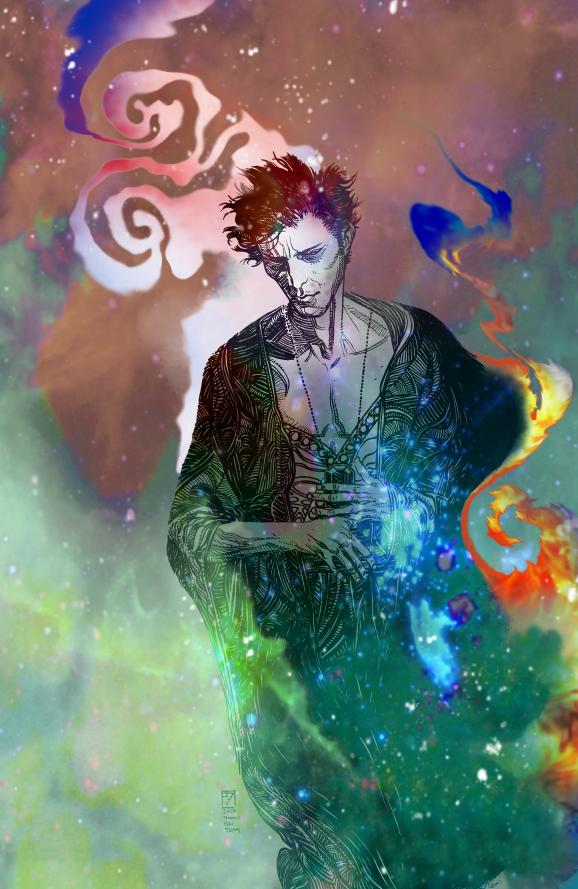 My anticipation building toward Overture’s release on Wednesday is intense, but to say the least, I am not alone. Like my red-haired, death-metal intellectual friend, many have followed the series from its first issue and it’s become a touchstone in their lives. They may have dreamed that the series would return someday, but I doubt even their wildest fantasies would’ve have cast the psychedelic and deep-minded Williams as the artist. I have no doubt that Williams and Gaiman realized that this combination would be a dream come true for fans, not to mention having original Sandman cover artist Dave McKean back on the project.

J.H. Williams is known for many stellar works of comic art, but there’s a substantial crossover between fans of Gaiman’s work and fans of Alan Moore’s work, so many readers who are picking up Overture will know Williams from his collaboration with Moore on the magic-driven hero series Promethea, which also pushed the boundaries of expression in comics and dealt with the vast playground of the unconscious as a place of personal transformation. Though Promethea, and the coming Overture no doubt, take us far into the unknown territories of our own minds, they also tell fascinating stories with central characters so memorable that they become archetypal to us. Good storytelling is at the heart of Williams’, and also Gaiman’s work at every turn, and so it’s not a gamble to presume that Overture will rock our world as comics fans. 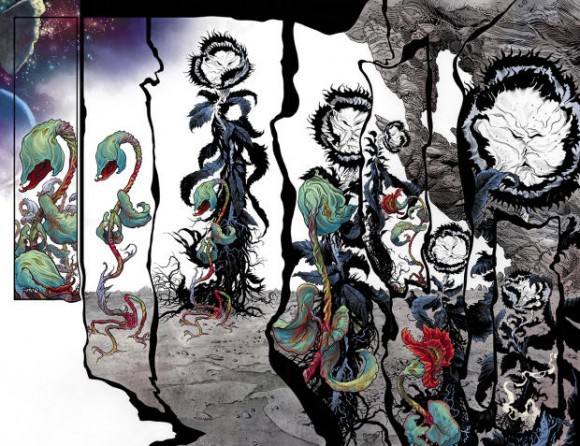 Knowing what I know now about comics, I’m looking ahead for once and trying to glimpse the future impact of the series. I’m seeing those moments that will happen all over the world where in a classroom a friend pushes a collected edition of Overture across a table and pleads with a snobby English major to give it a try. I’m seeing airport bookstores where professors see the cover of the trade and remember something buried in their past for just long enough to do something about it. For me, that’s miraculous. How could Sandman go back to its beginning again and do it all over with even more feeling? How is that even possible?

When that circle completes itself, the series will become even more timeless. So, Overture should be just as anticipated for its single-issue content as for the unusual place it has in the history of Sandman. For readers, we get to go back to the beginning, like watching the Big Bang of the universe’s inception from front-row seats, but for me, especially, when I pick up the comics issue by issue, it’s about going back and doing what I should have done to begin with. When I do, I’m going to be quite sure that somewhere my wise school friend is doing exactly the same thing. And that is a very nice feeling.