IAN McGINTY Welcomes You to WELCOME TO SHOWSIDE

Home » IAN McGINTY Welcomes You to WELCOME TO SHOWSIDE 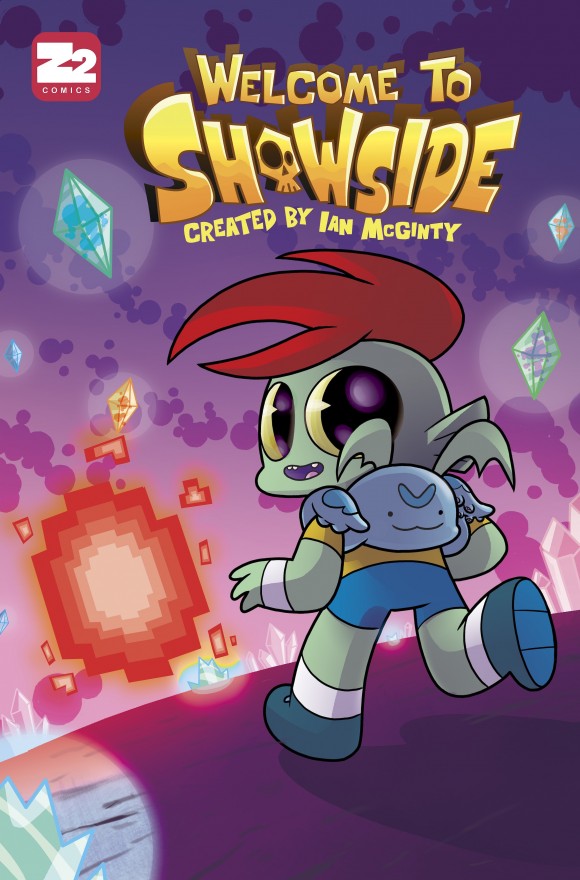 Ian McGinty is a funny guy who understands the whimsical. As a comic pro, he started making a name for himself working on Boom! Studios’ Bravest Warriors books.

Now, he’s jumping feet first into the realm of the creator-owned with a new all-ages book and animated pilot he’s producing and voicing — co-starring Rollins (!) — called Welcome to Showside.

What’s it about? Officially, it “takes readers on the adventures of Kit, a lovable kid with a monstrous secret: His dad is the Great Shadow King and he wants Kit to take over the family business of destroying the world.”

But Kit‘s not all that interested. He’d rather hang with his friends Belle and Moon. What happens next … well you’ll have to pick up the book when it comes out this October from Z2 Comics — part of the indie label’s new line. 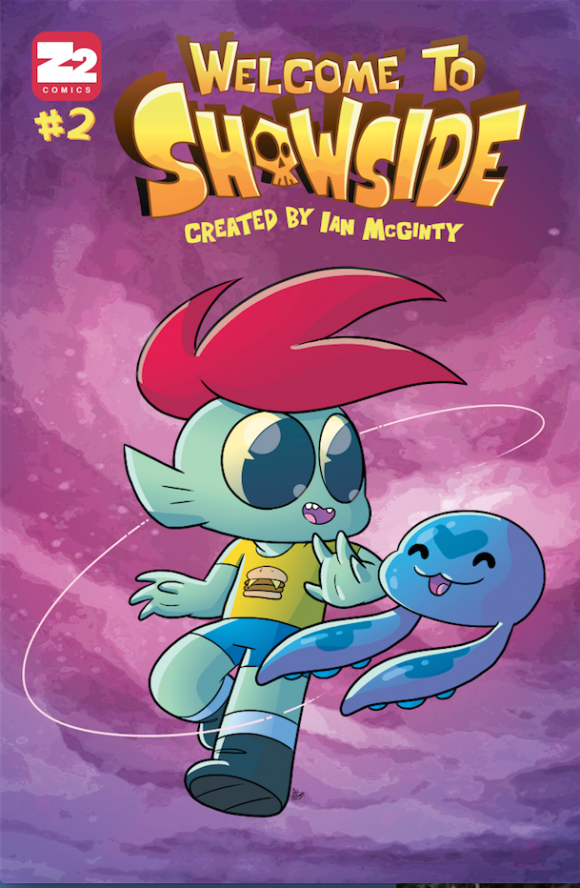 Ian McGinty: It was chunked and formed from various end pieces into a salty, decadent delight, much like Hormel’s Spam product or the Avengers. Throw in a little Hellboy, a little Steven Universe, some Adventure Time and even some manga inspiration and you’ve got Welcome to Showside, the comic series and animation. Cool stuff!

Rollins, huh? That’s pretty rad. How did that come about?

My producers managed to get a script into Henry Rollins’ hand and he loved the character I wanted him to voice. He also loved the script, a big relief for me. He was the kindest, most generous person I’ve met, and someone I’ve always wanted to work with so it all “came up Milhouse,” so to speak. We had a great time and Henry told me some cool stories about the Beastie Boys, my favorite band, and overall it was a dream come true. Someone I admired for a long time is now part of something I created, how cool is that?

Was the voice work done from a distance?

He was awesome enough to want to stop by the studio, meet everyone involved, and he stuck around long past the scheduled time. I mean, he nailed his parts in two takes but stayed and hung out with everyone and was just absolutely amazing to everybody. I was very impressed, considering I had no idea what to expect, and I’m flattered he not only respected my work but actively liked it.

I didn’t get along with my Dad. I think I need a hug. Will this book be like a big hug?

Yes and no, but that’s life. Kit’s relationship with his father will definitely be something we’ll explore as the series progresses, not mention Moon’s relationship with her grandmother and Belle’s place in her own family. A larger theme of Welcome to Showside is this issue of legacy, what your parents and friends expect of you and what you really want to do with your life. Thankfully, we’ll see friendship often win out in the face of monsters and demons, but in the face of family? Let’s see what happens. 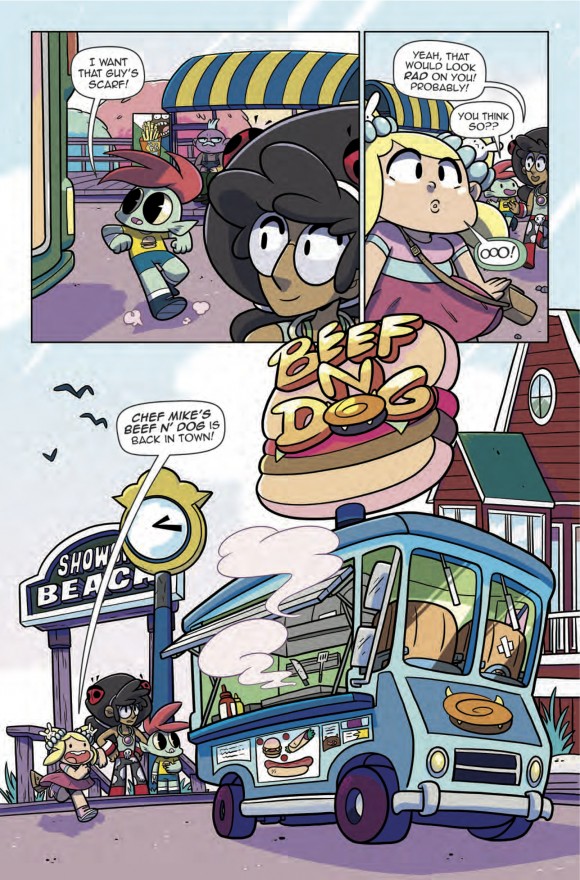 I’ve asked you before about sublimating your own style to fit a house style. Talk about how liberating this is for you.

Extremely. I’m lucky in that I enjoy working on-model to licensed characters, and I’m solid at it. At this point, I rarely need style guides as it comes naturally and, for me, it’s actually a fun challenge. That said, finally being in a position to work in my own way and get my original stuff out there is the best thing ever and I’m treating it almost like a vacation, which I think translates to the pages. I love what I do, and I love the characters and world, and they are from my head. That’s something new to me and very special. 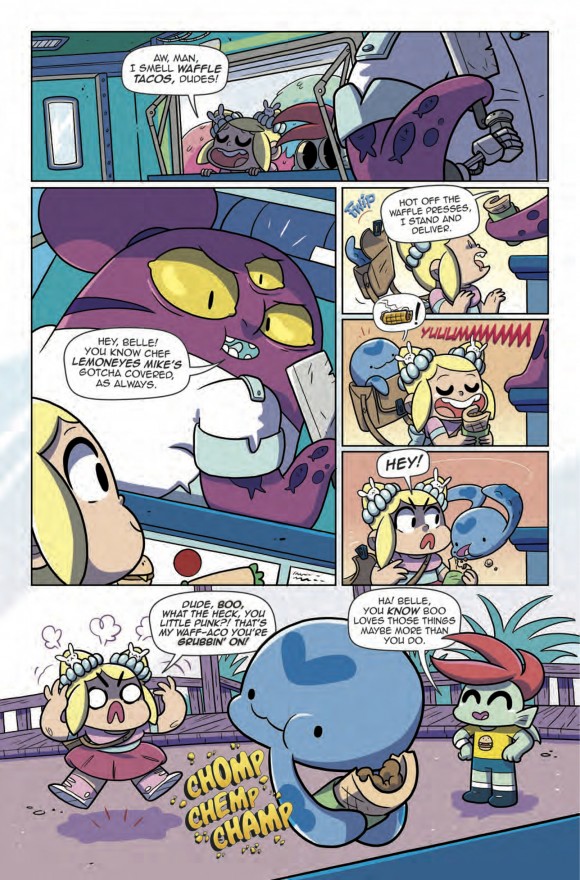 I didn’t realize that you were from Annapolis originally. I used to have a girlfriend there, years ago. Nice place. I don’t have a question about it. Just thought I’d share.

I have several ex-girlfriends there, which is why I don’t visit much. 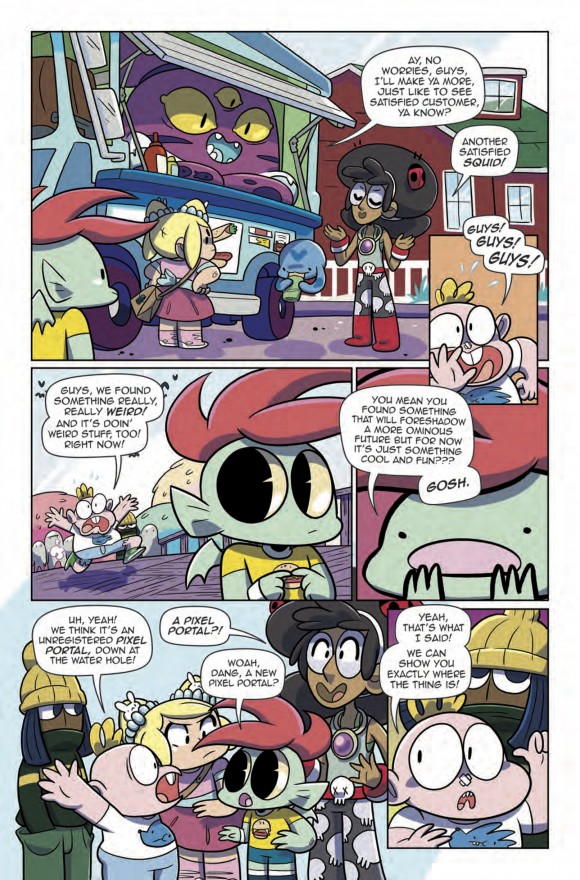 Tell us about all the awesome covers by your awesome friends and colleagues.

I’ve always tried to be supportive of my colleagues working in comics, and whenever I can I like to farm out work or inform editors of good people who are passionate and talented, in hopes they can move up in their career, too. This doesn’t happen enough in the industry, in my opinion. Jobs are scarce so the people with them try to hoard, which I understand, but it’s killing us as a community.

Suddenly put into a position where I was able to hand-pick artists and see their amazing interpretations of Welcome to Showside, I was able to ask tons of people from all kinds of avenues if they’d like to do stuff for the series and hopefully get a new notch on the ol’ comic belt. It’s been really fun and I’ve worked really hard to showcase people whom I not only respect as artists, but love being around.

Carey Pietsch, Carolyn Nowak, Rian Sygh, Fred Stresing, Kate Leth, Jen Vaughn, Katy Farina, Kizzy Whitfield, Rocco Miraglia, Sam Ellis and Margaux Saltel are just a few artists adding to the world of Welcome to Showside in the first issue, and there are many more for the next ones. They are all amazing people and artists, but more importantly, they are my friends and I’m so excited to be working with them again.

Issue 1 is due in shops 10/28. And in case you want to order the first two issues, the codes are: