Batman Eternal #52, DC Comics. I mentioned last year about this time how I was excited for another DC Comics weekly book. 52 captured my attention every week for a year and then they attempted it again with Countdown. Not a huge fan of Countdown, so I wasn’t sure what to expect with Eternal. Now that we are one issue away from the end, I can say that it is has been an exciting ride.

The whole series did a great job of keeping you on your toes in this whodunit. I thought I had it figured it out, but the reveal of who was actually behind the whole thing was a surprise that I didn’t see coming at all. Now that it was revealed, I went back and it all kind of did make sense.

Scott Synder, James Tynion and co. should be commended for crafting a year-long story that kept you guessing all that time. Now, let’s talk about the last page of #51! Actually, let’s not, because it’s a fun surprise and all it will do is make me want to read the last issue even more. 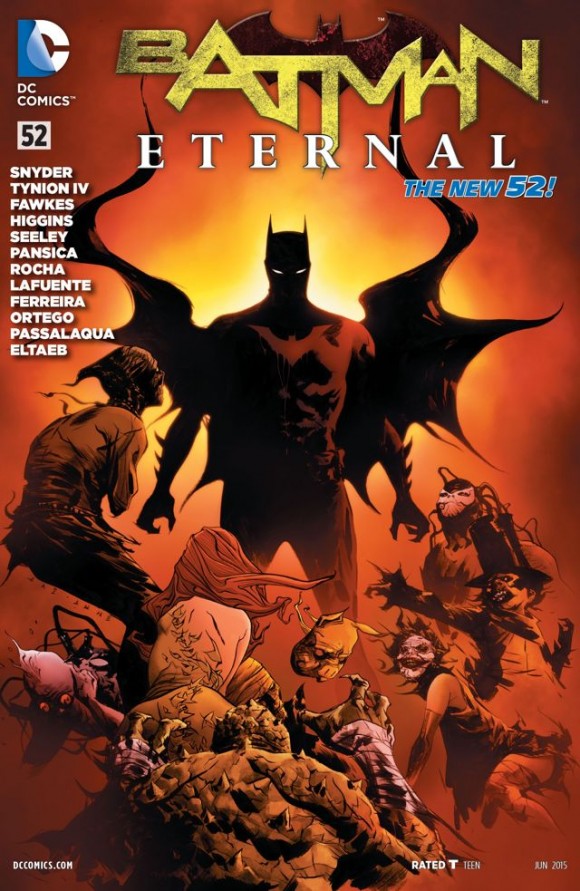 Convergence #0, DC Comics. Not a super fan of the concept, but it should be an exciting read. Just to see some old favorites like Kingdom Come and Red Son Superman again.

Star Trek Gold Key Archives, Vol. 3, IDW Publishing. My love for the goofy 1970s Gold Key Trek comics is well established, but it still needs to be noted that as the series went on, it only improved in both writing and art. By this point in the run, you’re getting some solid Star Trek tales.

Batman: The Animated Series Man-Bat action figure, DC Collectibles. I don’t much focus on action figures, but come on. Just look at this thing. Unreal. 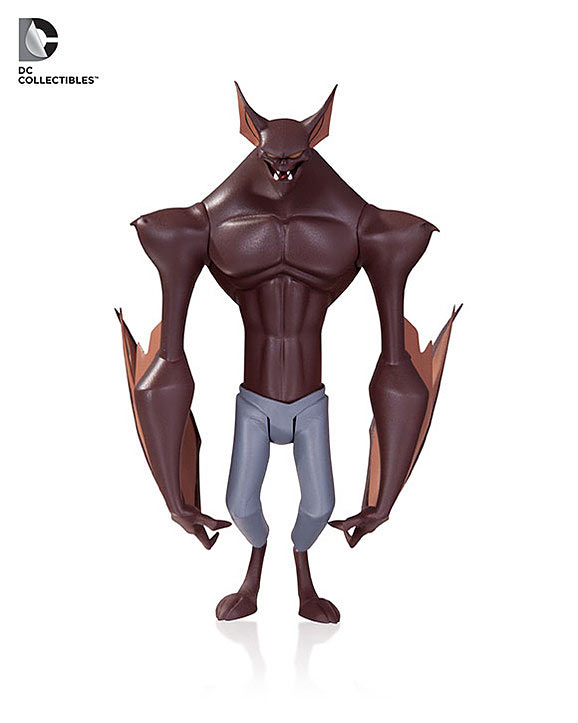 Convergence #0, DC Comics. What is it? Well, none of us really know yet. But it all starts here – I think? Maybe? Honestly, your guess is as good as mine. 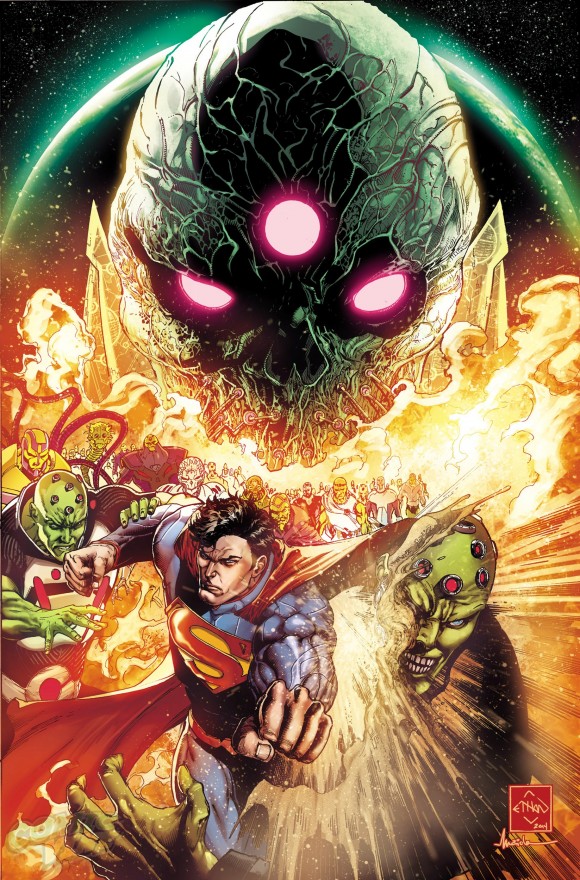 The Flash: A Celebration of 75 Years, DC Comics. With the Flash more popular than ever these days thanks to the CW, this is the perfect book to have around to give to customers who are interested in Flash‘s history. With stories from Gardner Fox, John Broome, Carmine Infantino, Curt Swan, Cary Bates, Marv Wolfman, Mike Baron, William Messner-Loebs and more, it’s a pretty strong package. My only quibble: Only one Mark Waid story? Seriously? For shame, DC. Still, well worth picking up.

Last of the Sandwalkers GN, First Second. Jay Hosler is a nice guy. He’s also a PhD. He self-published two wonderful science graphic novels, Clan Apis, about the life cycle of bees, and The Sandwalk Adventure, about Charles Darwin. So I’m very excited about this. 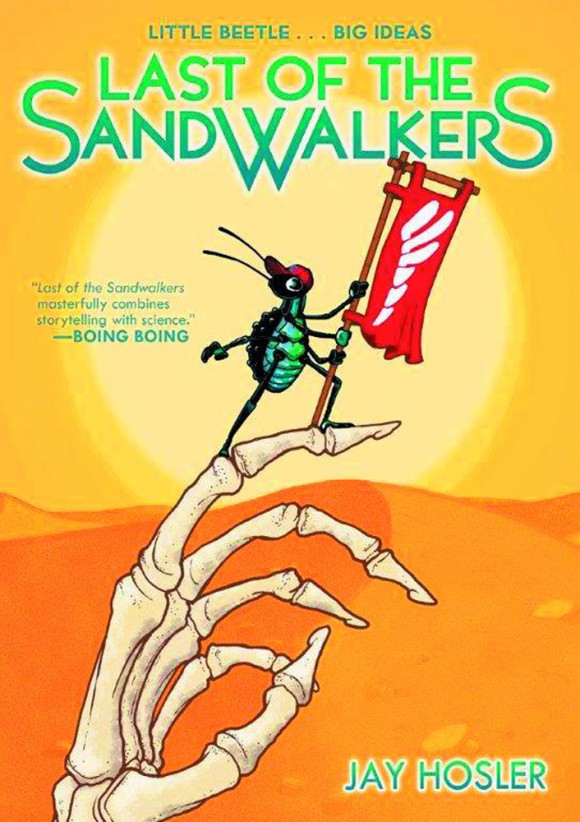 Lumberjanes Vol. 1 TP, Boom! The issues keep selling. I was surprised it took so long for a collection to be solicited. But now that we can’t restock the earliest issues, this is helpful. Girl scouts and ghosts at camp. Not the registered, trademarked Girl Scouts.

No Mercy #1, Image Comics. College trip gone wrong. Finder fascinates me, so I’m up for anything Carla Speed McNeil does. 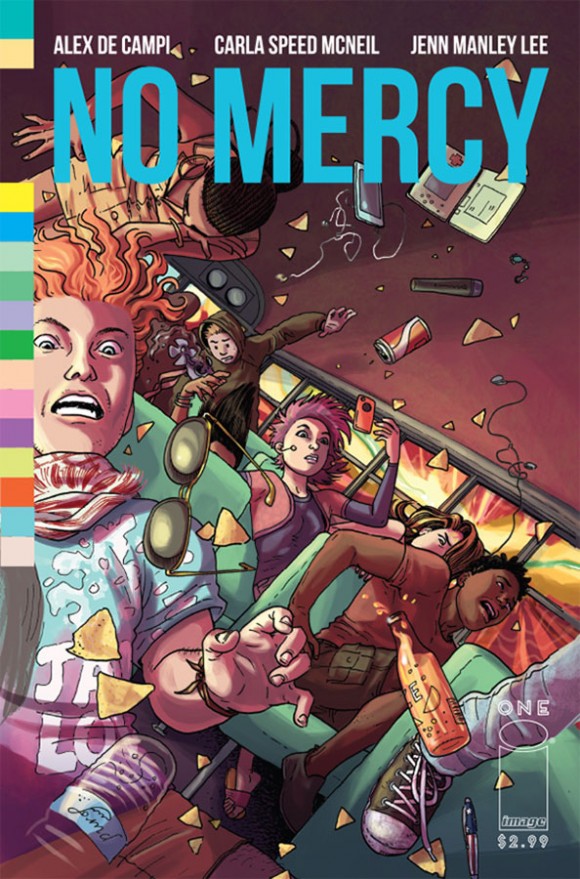 No picks this week.

Dying and the Dead #2, Image. So the Colonel takes the offer and recruits the Fighting Hellfish for one last tour of duty. They really aren’t the Hellfish. That was a Simpsons reference (but it would have been awesome). So yeah, pick up #1 if you haven’t already and lose yourself in the artwork. For real, you will. Especially on those two-page spreads. Mmmm…. two-page spreads……

Lumberjanes Vol. 1 TP, Boom! Noelle Stevenson, Grace Ellis and Shannon Watters turn it OUT in Lumberjanes! LCS Valkyrie Stamp of Approval all over this comic, every page, every panel! I kind of can’t say enough about this book. And I’ll admit, that like everyone else, I slept on this book and can’t get Issue #2.  Thank the Holy Kitten for the trade! Who is the Holy Kitten? Get the trade! At Miss Quinzella Thiskwin Penniquiqul Thistle Crumpet’s Camp for Hardcore Lady Types (say that five times fast), five tough chicks earn their honor badges while dealing with monsters and paranormal activity in the surrounding woods. If you dig Adventure Time, HowToons, Battling Boy and even Ms. Marvel or the new Thor, pick up a copy of this trade. And then the single issues to catch up. Bonus on the single issues for including a set list to listen to while you’re reading! I literally pre-sold this book to a guy for his wife for Mother’s Day, so y’know *nudgewink* on that gift idea. Heh, “can’t say enough”… 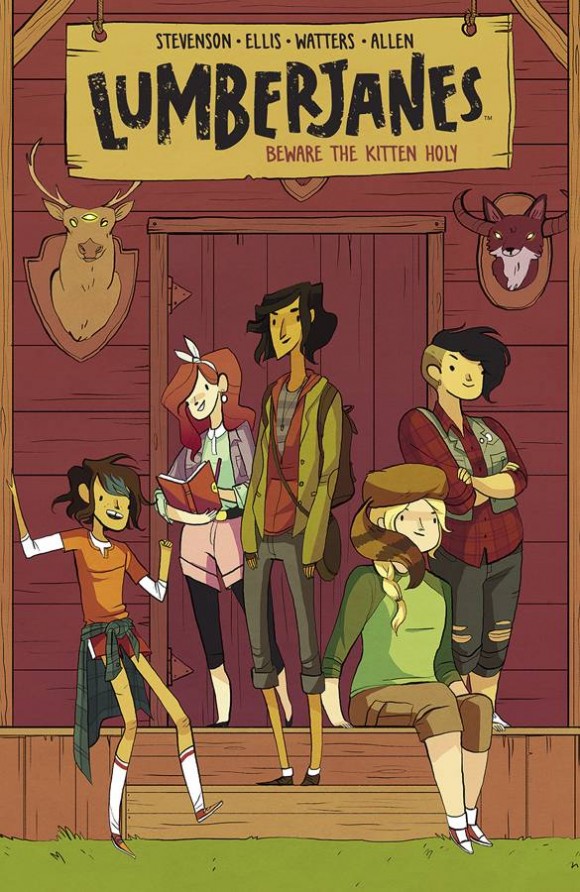 Avengers: Ultron Forever #1, Marvel. *In Dr. Zoidberg voice* “Oh no! It’s the future and the robe-its have taken over!” Well, one robot in particular: Ultron! That mechanical scamp took 500 years, but he got what he wanted in eliminating those pesky humans. Almost. There’s like a handful left in slavery and greasing the cogs of Ultron‘s mechano-toilet. Since the humans kinda wanna avoid that, Dr. Doom sends seven Avengers through time to kick some mechanical butt. First of three parts, check it out. Bonus points if you can spot Ultron‘s mechano-toilet. Of course he uses the toilet. Listen, if you have to change the oil on your car, he has to do stuff like that too. I bet his talks, like one of those cool bidets I keep hearing about… 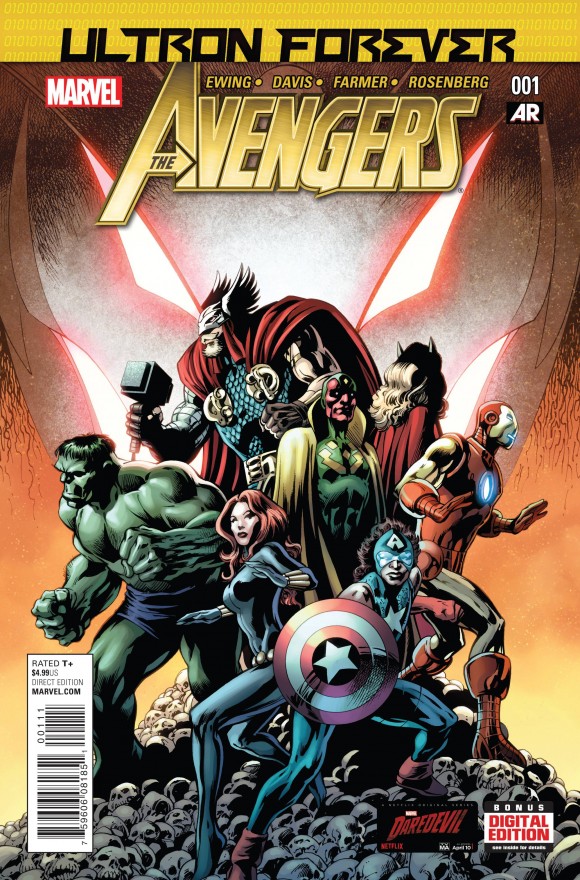