Star Wars #1, Marvel Comics. Even though I had a chance to read this early, I’m still going to be picking it up this week. Sure there are many covers out there for the collectors but the story is what is going to make me buy it. Jason Aaron captures the same spirit of the characters from the movie. Between the story and John Cassaday’s art, it truly feels like a mini-sequel after A New Hope. If this is any indication of how Marvel will be treating these characters, then we are in for a good year. Aaron and Cassaday will be signing at my store this Friday from 6 to 8.  Stop by for that and a high five from me! 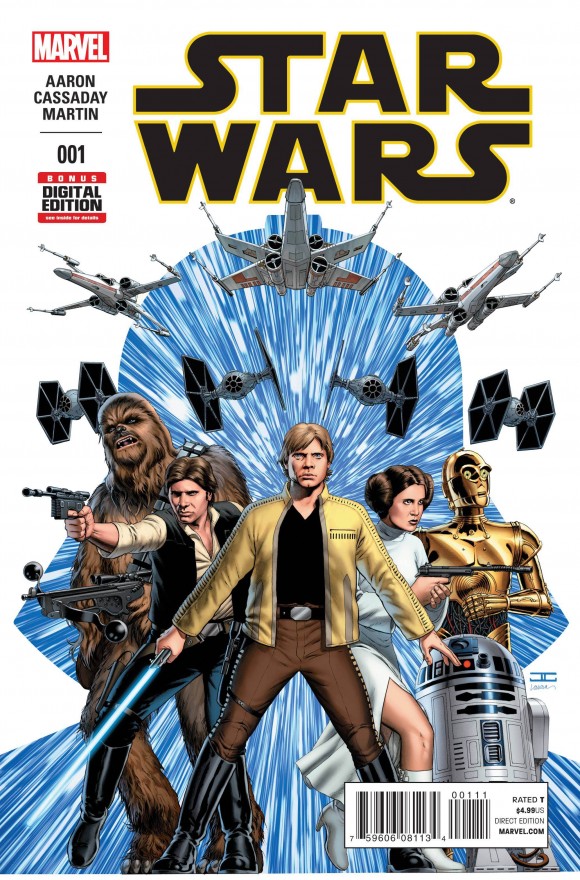 Michael Jordan Bull On Parade HC, Fantagraphics. Creator of one of my favorite biography comics, 21: The Story of Roberto Clemente, Wilfred Santiago releases his follow-up book about another iconic sports star. When I was younger, my friends and I used to look up to Michael Jordan the same way we did super-heroes. The things he did were more than the average human could do and we spent hours trying to emulate him. The same way we would tie towels around our neck and pretend to fly.

Walking Dead #136, Image. Is it me or is the story moving away from Rick as the main character and transitioning to Carl as the focus? Wouldn’t be a bad thing, but we are seeing Carl grow up more in the last three issues than the whole series. Anyway, it looks like another group has found their little paradise. I’m guessing the Whisperers are going to try their best to get their own back after being captured last issue. Let’s see how Carl deals with that.

Star Wars #1, Marvel. What else could it be? After so many years of faithful stewardship by Dark Horse, Star Wars being in anyone else’s hands was bound to be big news. With Marvel putting top talent on these books, it’s going to be a fun ride.

Conan/Red Sonja #1, Dark Horse. As a kid, I always loved the Marvel Conan comics when Red Sonja would show up. So it’s great to see them together again, and with Gail Simone, Jim Zub and Dan Panosian at the wheel, I’ve got high hopes.

Astro City #19, Vertigo. Kurt Busiek and Brent Anderson quietly deliver one outstanding issue after another of this most remarkable series. And the great thing is, practically every issue is a good jumping-on point. 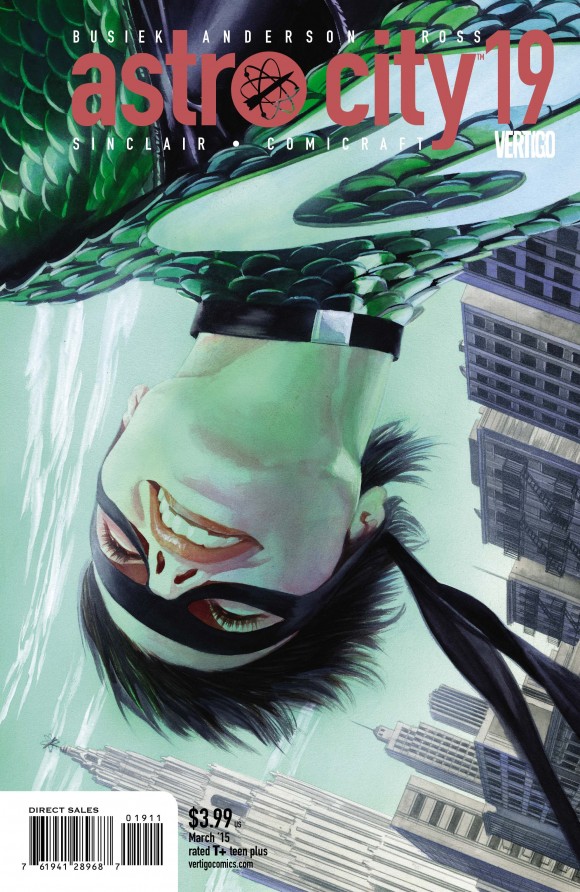 Rat Queens Braga Special #1, Image Comics. If you’re not reading Rat Queens, do yourself a favor and pick up the first trade. This issue puts the spotlight on Braga, the prince-turned-badass-Orc-babe member of the Peaches gang. (Can orcs be babes? Conundrum.) 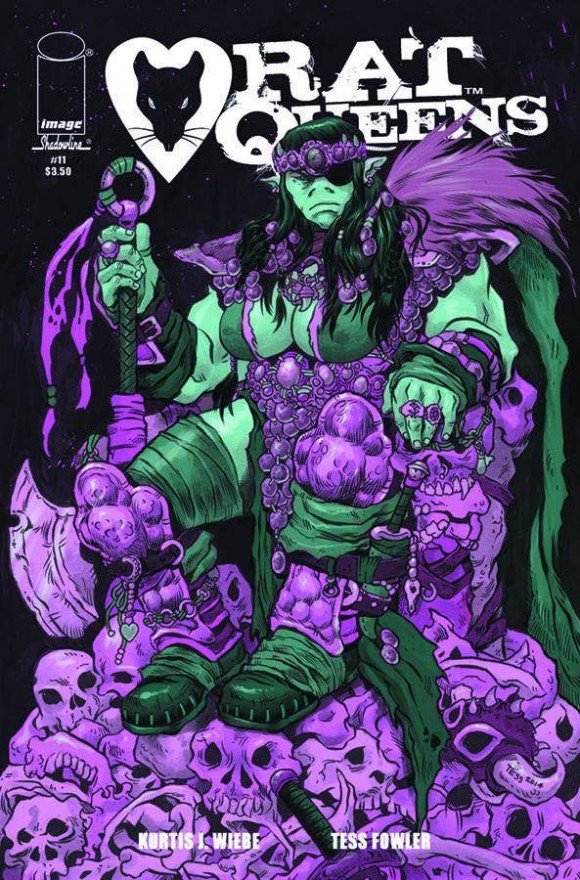 Fables: The Wolf Among Us #1, Vertigo. Lamenting the end of the Fables series?  Dig the video game?  Just can’t get enough Bigby?  Well this little comic is the answer to your prayers!  This new title (currently a web series) is a prequel to the Fables comic series focusing on Bigby’s days as sheriff of Fabletown.  And boy, does he have his paws full!

Another amazing week for comics! We’ve got Meredith Gran returning to Adventure Time with Marceline Gone Adrift #1, Jim Zub and Gail Simone combining their two barbarian champions in Conan/Red Sonja #1, The latest Rachel Rising TPB by Terry Moore and the return of Rat Queens with the Braga Special (formerly solicited as issue #11). But, even more exciting:

Boom Box Mixtape, Boom Studios. A wonderful little anthology title featuring some of Boom’s hottest properties and original comics. A new Lumberjanes story should be enough to entice you, but there’s also the first look at the new Munchkin comic (based on the card game, not the wonderful Dunkin’ Donuts confection.)

Henshin, Image Comics. Ken Niimura, the artist on the wonderful I Kill Giants has a new collection. Well, new to English readers, anyway. The anthology title gives us a unique view of Tokyo from the perspective of a plethora of different characters. Humor, pathos and the fantastic are all equally represented in this wonderful cartoonist’s work, so check it out!

Sam Zabel and the Magic Pen, Fantagraphic Books. Dylan Horrocks is a master. The journey Sam Zabel takes through a magical comic book land is full of references and tropes we all recognize but it also features a moral component that is so thoughtfully laid down that the reader finds themself thinking about the implications for a long time after finishing. Most of these pages have been online and I’ve loved every one I’ve seen. Do yourself a favor and pick this book up now, instead of a month from now when it’s the graphic novel everyone is talking about. 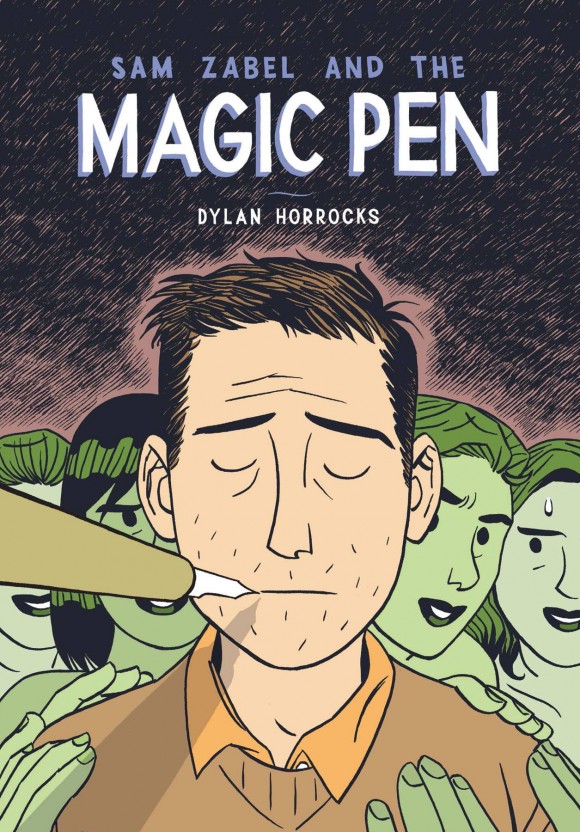 Sam Zabel and the Magic Pen, Fantagraphics. From the guy who wrote and drew Hicksville.

Henshin, Image Comics. From the guy who drew I Kill Giants.

Star Wars #1, Marvel Comics. Dark Horse made a good effort with the license, but sometimes publishers spend so much money on a license that they don’t have much left over to pay top talent, so they hire new talent. Or drawing a licensed book with its reference and layers of approval is such a chore that only new talent will take on the job. I don’t know what went on behind the scenes at DH for its 25 years of Star Wars comics, but most of them struck me as kinda blah. Jason Aaron and John Cassaday are the opposite of blah.

Silver Surfer #8, Marvel Comics. The greatest space opera of all returns to Marvel! Norrin Radd, the Silver Surfer, is back in more light-hearted, highly enjoyable adventures with his new human companion, Dawn Greenwood, in tow. Watch as he deals with powerful despots, wields an inexplicable cosmic force, and handles his emotions like a cosmic Buddha, all through the pencil work of Mike Allred, and the dialogue and plotting of Dan Slott. What? What did you think I was referring to? Which one is that? Isn’t that the one where the one dude kisses his sister? Eeeeww! 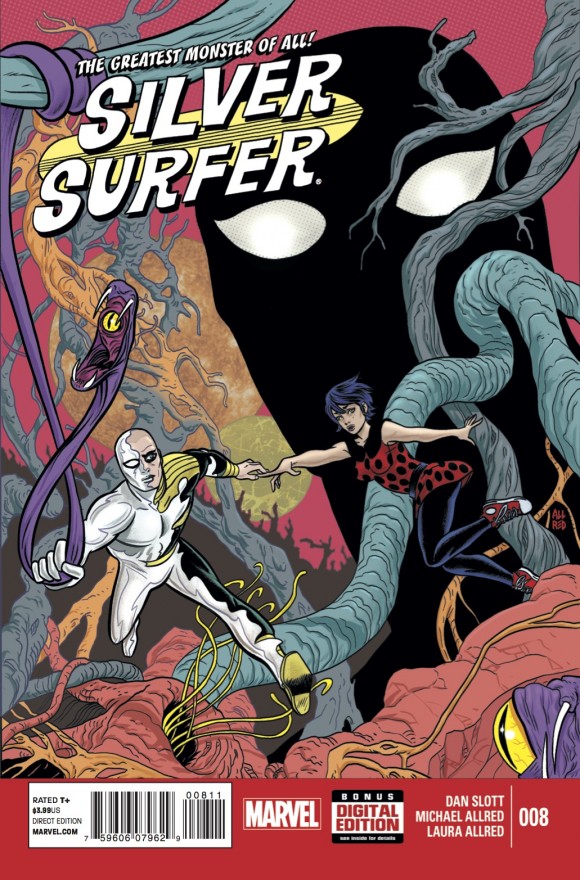