We welcome a new member to our recurring cast of Hot Picks experts — Christy Blanch, who’s one of Mark Waid’s partners at Alter Ego Comics. Let’s see what she — and the rest of our august group — picks!

Superman/Wonder Woman #2, DC. I wasn’t looking forward to Superman/Wonder Woman at all. I carried on how Lois is for Clark and Diana belongs with Steve Trevor. However, I was so proven wrong by the first issue. I loved their camaraderie, I really dug the whole flower scene, and the art was spectacular. While I’m still not sold 100 percent on the pair-up, this series has me believing it more and more and I am very much looking forward to the second issue of this book.

Thor: God of Thunder #15, Marvel. This series is quickly becoming one of my favorites. I really enjoy the way that Aaron writes banter in any book, but it really shines in this one. It probably doesn’t hurt that Malekith the Accursed, created by the amazing Walt Simonson, is the villain they are searching for and “Thor: The Dark World” featured him. All I know is that I am anxious to see where this story arc goes. 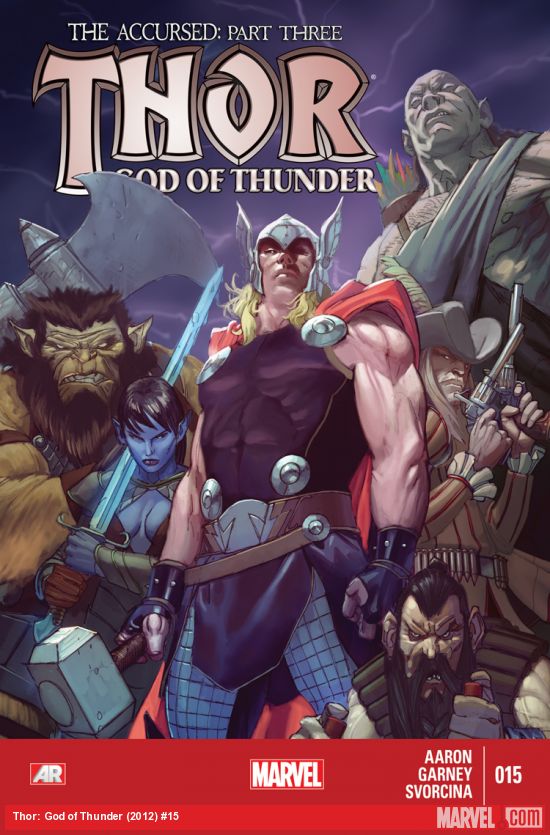 Coffin Hill #2, Vertigo. What first drew me to this book was the title and the art. What kept my attention was the storytelling and the art. In the first book Kittredge explained the past, the present, and gave us a glimpse into the future. Now the horrors from her past are coming back. The reader feels a connection with Eve as she just wants to get on with her life and get past the stigma of her family. We all have to face our demons, past and present but in this case, we all get to ride along with her and forget our issues for a while. I think this book has serious potential!

Christy is a longtime comics fan and is the writer of Thrillbent‘s The Damnation of Charlie Wormwood. She teaches higher education using comics, taught the Gender Through Comic Books SuperMOOC and is getting her doctorate in higher education. She presents at conventions and conferences about comics, and is co-owner of Alter Ego Comics. Oh, and she has two kids, four cats, a dog, and a rabbit. Four cats!

Protocol: Orphans #1, Boom! Sure looks interesting. Espionage comics are getting more and more popular and this one by Michael Alan Nelson and  ariano Navarro sure looks like it has plenty of intrigue and action. A government agency that trains orphans to be sleeper agents and then puts them out in the world under foster care? FUN!

Umbral #1, Image. A mythological, regicidal fantasy epic tale by the creators of Wasteland. Johntson and Mitten are a great team and this is one of those eagerly awaited books out this week — it’s already sold out on the distributor level, so make sure you pick up a copy!

Wraith: Welcome to Christmasland #1, IDW. Joe Hill and CP Wilson tackle one of the creepiest fantasy creations of the year! Straight out of Hill’s Best-Selling NOS4A2, the miniseries offers an additional creepy view on Charles Manx, his evil car and the magical fantasy land they bring their “rescued” children to. If you’ve read the novel, you know how ridiculously scary this book is going to be. If you haven’t read the novel the odds are good that after picking up this piece of horror magic your next stop will be the bookstore or library. 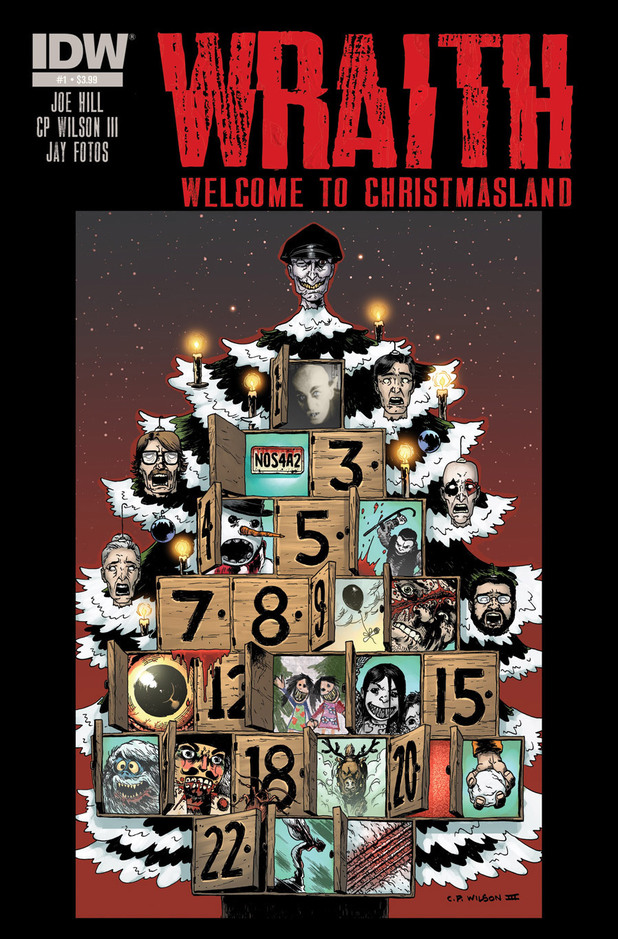 Wraith: Welcome to Christmasland #1, IDW.  I read NOS4A2 earlier this year and it is one of the most scary things I ever read. Now I get to relive those nightmares in the pages of this new series written by Joe Hill himself. This is the tale of Charlie Manx. Manx drives around in an old Rolls Royce Wraith, where he picks up children to take to Christmasland. NOS4A2 concentrated more on Manx picking up the children and never really showed us Christmasland until the very end. I can’t wait to read about what exactly happens in Christmasland and then not get any sleep at night.

X-Men Gold #1, Marvel. Marvel celebrates 50 years of X-Men with a new tale by Chris Claremont. You know, the guy who created half of the X-Men characters you read today? He’s joined by Bob McLeod in an untold story from his old X-Men days. It’s going to be like opening a time capsule from the past. And as a cheap plug, Claremont will be signing copies at my store on Thursday the 14th. Come say hello to both of us!

Walking Dead #116, Image. Walking Dead starts its biweekly run with this one. I hope that we are finally going to see the war that has been hyped all summer. I can only handle so much build-up!

Lone Wolf and Cub Omnibus Vol. 3, Dark Horse. $19.99 for 720 pages of Goseki Kojima’s rendering of Kazuo Koike’s ronin and son in feudal Japan is a ridiculous bargain. If you haven’t tried this series yet, now’s the perfect time. Dark Horse is reprinting these classics in omnibus edition every three months. Bonus: Covers are by Frank Miller! 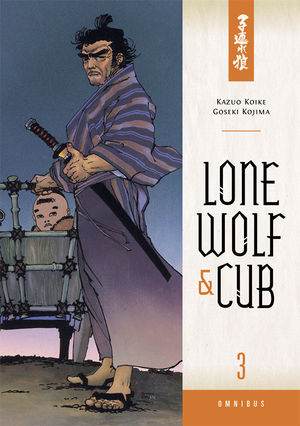 Scott Pilgrim Color Hardcover Vol. 4, Oni Press. We all said the same thing when we saw Scott Pilgrim was being printed in larger format in color: “Damnit! Now I have to own this in color!” And we do, because we love Bryan Lee O’Malley that much. The color work on these editions is so awesome it’s worth the $24.99 cover price. 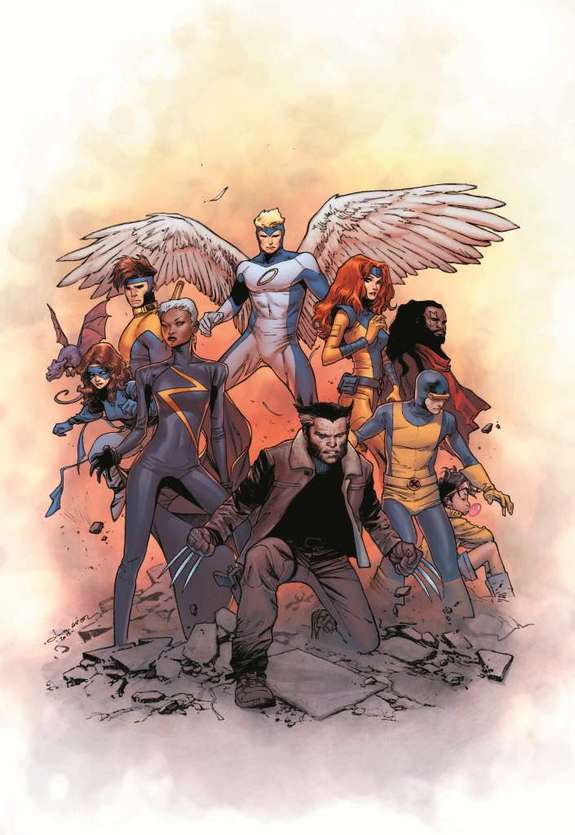 X-Men Gold #1, Marvel. I will always pick up an X-Men book by Chris Claremont. Even if you have been disappointed with some of his work in the past, what he has done for the X-Men is immeasurable. Every well-known story and character has come about due to him. I love the way he plots out stories; playing out certain storylines more dominantly, while always acknowledging the others. I tell you, they don’t make comics like that anymore. X-Men Gold appears to be a collection of short stories, with some classic creators including Claremont, Stan Lee and Walt Simonson. I’m obviously excited for it, and for the signing on Thursday at Midtown Downtown. Hey Ted! Hold a copy for me!