Aimee (and Dan) are amped up for Multiversity … but there’s a LOT of anticipation for Little Nemo! PLUS! We welcome a new member to the crew!

Say hello to Scott Tipton, folks. Yep, he writes comics but he sells them too!

He gets the lead-off spot this week:

Little Nemo: Return to Slumberland #1, IDW. Winsor McCay’s comic-strip classic is in the best of hands with writer Eric Shanower and artist Gabriel Rodriguez. Some of the most beautiful art of Rodriguez’s career. And I can stock it in both my kids’ section and my new-release section! 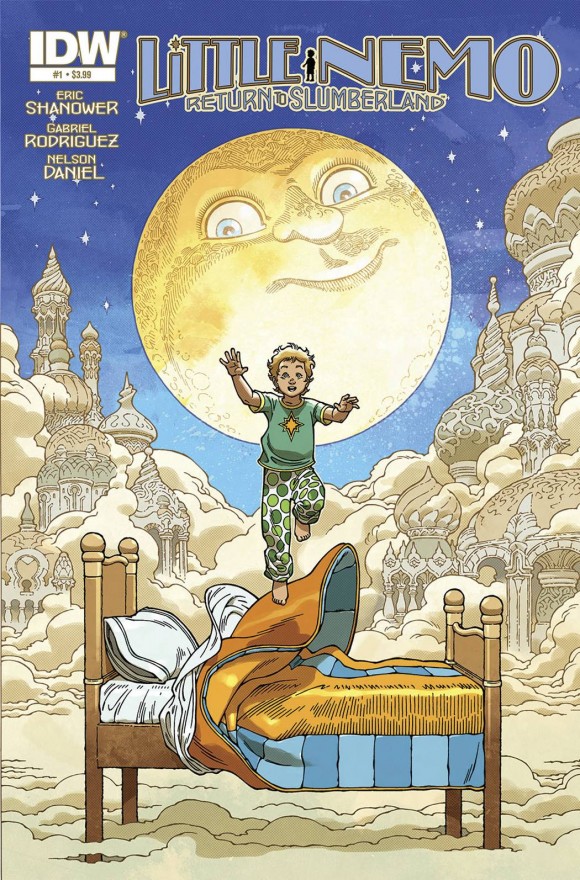 Multiversity #1, DC. Multiple-earth DC madness from the man who does it best, Grant Morrison! Besides, it’s got Captain Carrot in it! Sold!

Ms. Marvel #7, Marvel. I can’t remember the last time I enjoyed a new Marvel character this much. A female-led book that’s compelling, emotionally rich and consistently fun? What’s not to like?

Multiversity #1, DC Comics. Grant Morrison takes us on a ride through the Multiverse (or as we call it, the 52-niverse), with six stories on alternate earths. Vampires, Nazis, Dino-Cop, you name it, Grant’s gonna take it three steps further. The best part?  Captain Carrot! 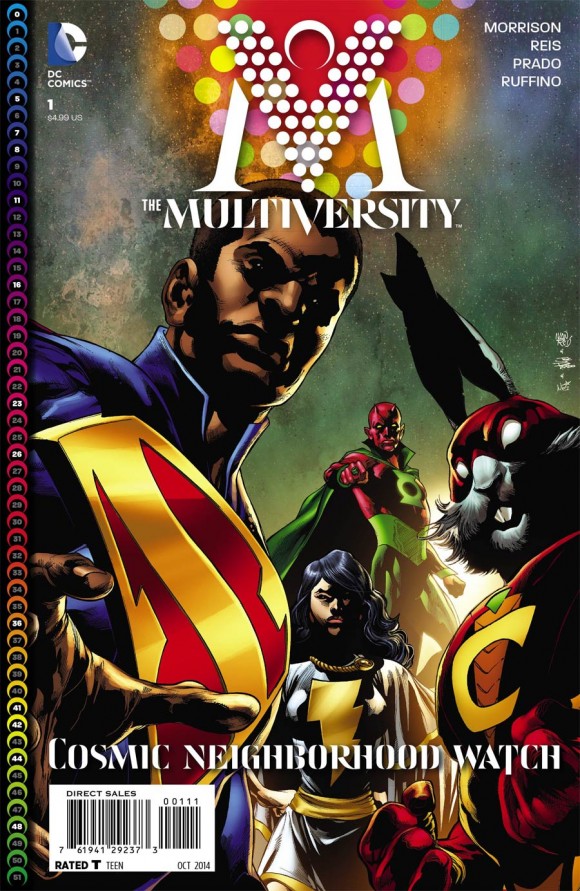 Batman Black & White Statue by Jae Lee, DC Collectibles. You didn’t think they’d be able to do a sculpt for Jae Lee, didja? They did, and they knocked it out of the park. This statue is dripping with gorgeous, just like Jae’s artwork. Taken from the Batman/Superman cover, this statue is an instant classic. 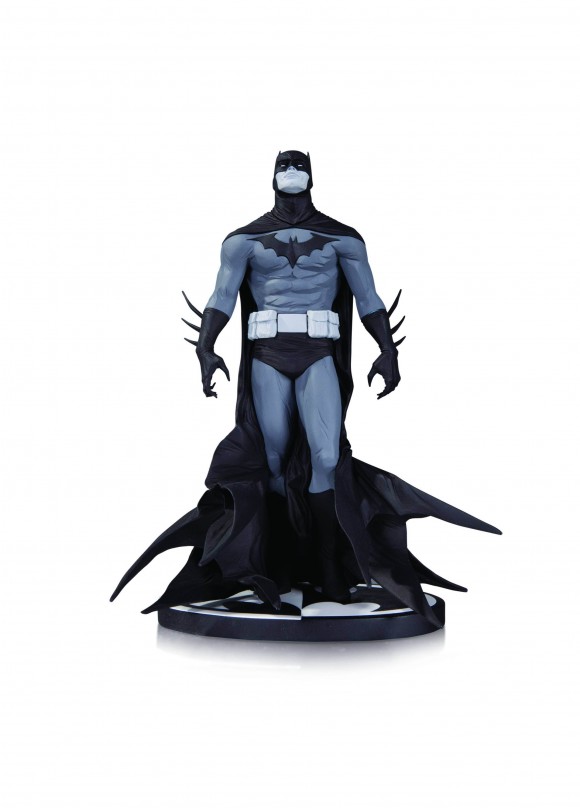 I know everyone is excited for Multiversity this week, but there are so many other great books coming out! I really believe this is the best time to be a comic-book fan, ever!

Empty Man #3, Boom! This book is creepy. Really, really creepy. And excellent! Our customers LOVE this book and I am right there with them. The only problem with this book is that it only comes out once a month. I want more!!!

Daredevil #7, Marvel. No, Mark doesn’t pay me to pick this book. I simply love it — the writing and the art by Chris Samnee, who is one of my favorite artists and storytellers! This is the conclusion to the Original Sin storyline, the one that had people ranting. I have faith in the storytellers and personally can’t wait to see how this all turns out!!

The Life After #2, Oni Press. I have to admit that I am a big fan of Josh Fialkov both as a writer and a person. That said, regardless of how I feel about Josh, this book is amazing and touching and I am so happy that #2 is coming out! And oh my gosh — the art is amazing!! Do yourself a favor and pick up this book and the first issue. You can thank me later. 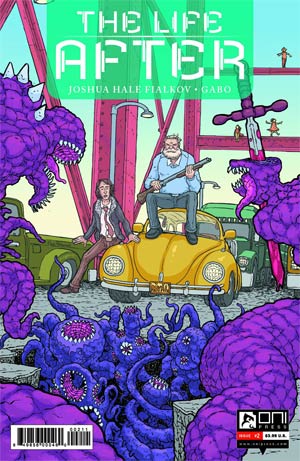 The Fade Out #1, Image. I sound like a broken record, but the team of Ed Brubaker and Sean Phillips has never let me down. The just-wrapped Fatale proves just that. Now they have teamed up again to bring us a story from 1948 Hollywood. Their stories are a great example of great storytelling and characterization. Everyone looking to get into comics should use these as a guide to getting into comics.

Another amazing week, and I really hope that some of my fellow retailers pick other stuff because I am positively ECSTATIC for these books, so I can’t highlight less-hyped books as I usually do.

Dark Horse Presents #1, Dark Horse. The best monthly anthology out there is back! I have been a huge fan of the older, larger $7.99 and I wasn’t the only one, considering all the Eisners it won. And now it’s back! And cheaper!

The Fade Out #1, Image Comics. Brubaker and Phillips are also back! Alright, they weren’t gone long but that’s totally beside the point. The first book under their new “do whatever you want” contract at Image, this book about Post WWII Hollywood not only looks sumptuous, decadent, and brilliant but represents a huge success for creators in the industry, so pick it up for your principles and stay for the awesomeness that is one of the best teams (Betty Breitweiser on colors — YUM!) in comics! 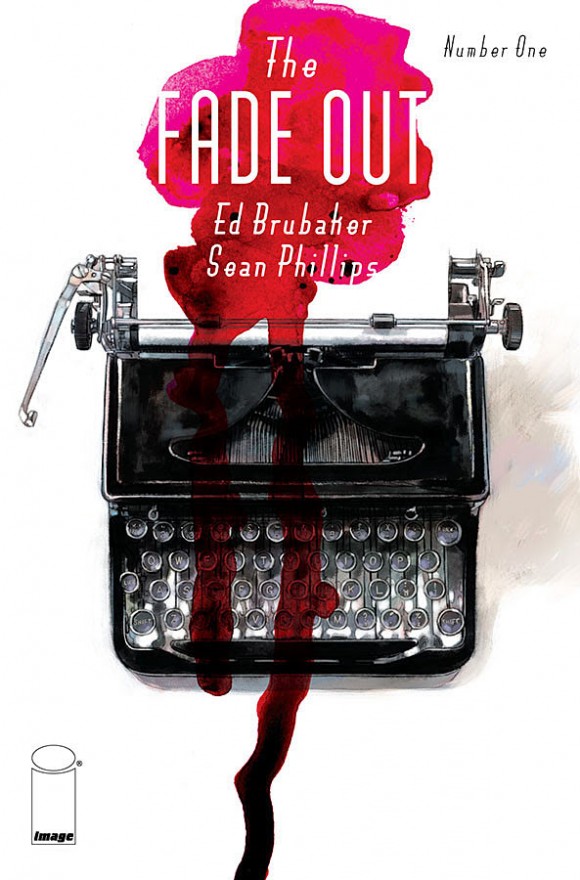 Little Nemo: Return to Slumberland #1, IDW. I’ll be honest: I HATE comics like this. Taking a comic strip character and putting them into a long form comic is a travesty, in my mind. And to do it with Winsor McCay’s Nemo?! A strip that was a perfect execution in SINGLE PAGE serial comics? Argh! But then you get Eric Shanower, whose knowledge and work on the Oz books is legendary (not to mention his own Age of Bronze, the greatest EPIC comic of all time), and you pair him with Gabe Rodriguez, whose draftsmanship and use of space is up there with Gerhard’s and McCay himself and you’ve got me tempted. Throw in the IDW team who are masters at respecting the properties they put out while creating something new with them and you’ve got me! I went from being disgusted by the idea of this to eagerly anticipating the book and I think you’re all gonna love it.

The Fade Out #1, Image Comics. We talk about Saga and Bone as untoppable bestsellers at Hub Comics, but the Brubaker/Philips oeuvre is its own treasure trove that never fails to satisfy readers or fill store coffers. I visited a LCS that didn’t have “Criminal/Incognito/Fatale” in stock and I was shocked and embarrassed. This here is the next big thing and the next sure thing.

Little Nemo: Return to Slumberland #1, IDW Publishing.  I don’t think you can go back to something like this, Winsor McCay’s sublime, tabloid fancy that so enraptured William Randolph Hearst. The Sunday comics page has never seen a talent as white-hot stellar, and never will again. But — BUT — if you want to try anyway, and I’m not convinced this will work — this is a lovely team to give it a go: Eric Shanower, the only guy allowed to write new Oz stories (Right? Did I hear that somewhere?), and Gabriel Rodriguez, with his precise combination of technical, cartooning, and illustrator abilities. And if any publisher is positioned right now in the art zeitgeist to try, it’s IDW, so let’s take a read and see.

Savage Wolverine #22, Marvel Comics. John Arcudi, who Mark Chiarello called a great comics humanist, wraps up his two-part WWI yarn, with Joe Quinones — how did it take this long for him to draw Logan? — and Maris Wicks, one of the few people to color Joe Quinones like Joe Quinones would. And a Kevin Nowlan cover!