Before we get to the real meat of my column, I will point out that LOTS of customers are wondering what Marvel books are “important” for Secret Wars or the relaunch in October. So far, the answer is: No one knows… except for the fact that Silver Surfer #13 (previewed here) says THIS in its solicits:

— THE LAST DAYS – “The Death of Everything That Ever Was or Will Be”
—  Time ran out and the Marvel Universe died. From the edge of Battleworld to the outskirts of all infinity, every planet, moon, and star has been expunged. Every life force has been extinguished. There are NO survivors…
— …except the Surfer, Dawn, and Toomie. How did they pull this off? And, more importantly, can they figure out a way to bring everything BACK?
—  If you care about the fate and future of the Cosmic corners of the Marvel Universe, you cannot miss this comic!

Seems to me, that would make this an important book, and based on the released solicits for the future issues, I’m willing to say I’m right. So, yeah, if Secret Wars is your new favorite thing, you should probably pick up this book. I mean, you should be buying this wonderful comic ANYWAY, but, yeah… 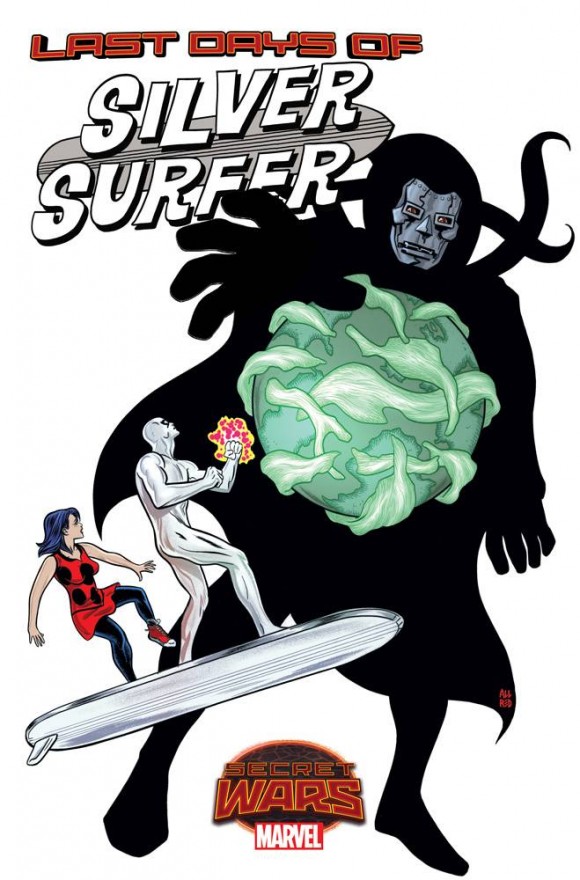 Now, on to the heavier stuff:

Who cares that award-winning (and just plain talented) Emma Rios and Brandon Graham are running the book?

Why would anyone care that it has work from not just Graham and Rios, but also Kelly Sue DeConnick, Ludroe and Marian Churchland?

Let’s first get our American perspective out of the way. In countries all over the world, this is how comics are read: in anthology collections, each containing chapters of ongoing stories. Usually, those get collected into the manga volumes you are used to, or “graphic novels” with added content and maybe some changes.

Here in the US, this has become slightly more common, with trade paperbacks coming out between single issues at many companies, but there are still very, very few anthology magazines/comics out.

I mean, everyone is hyped about Grant Morrison taking over as EiC for Heavy Metal, but that’s not out until February. Of course, the wonderful Dark Horse Presents (also out this week!) won the last four years of Eisners but even they had to trim down and lower their price-point to keep the book worth their while. So, before we even discuss the content of this book, let’s just acknowledge that this is an awesome format that needs a wider audience in the US. 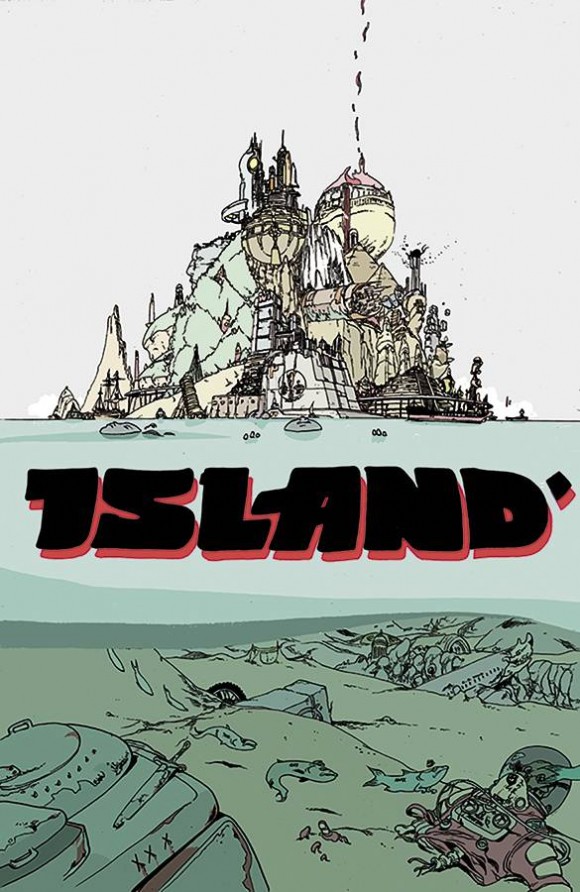 In fact, it’s really this sort of format you’re buying when you pick up 3 or 4 comics from a major publisher: you’re buying single chapters of an overall story and odds are you’re going to read them mostly together, so the only difference with Island is it’s in one book and instead of paying between $9-$12, you’re paying $7.99. (It’s an Image book, by the way.)

Now to the content: We’ve got one story by Emma Rios, one by Brandon Graham and one by Ludroe, with shorter pieces by Churchland and DeConnick between them. Now, unless you’ve been living under a rock for the last few years, you know who most of those people are and how arresting and powerful their work is. Ludroe’s work I only know from Prophet but those few pages I’ve seen are truly sick!

From the opening of Rios’ story, you can tell this is the sort of visual story-telling so many comics are missing nowadays. 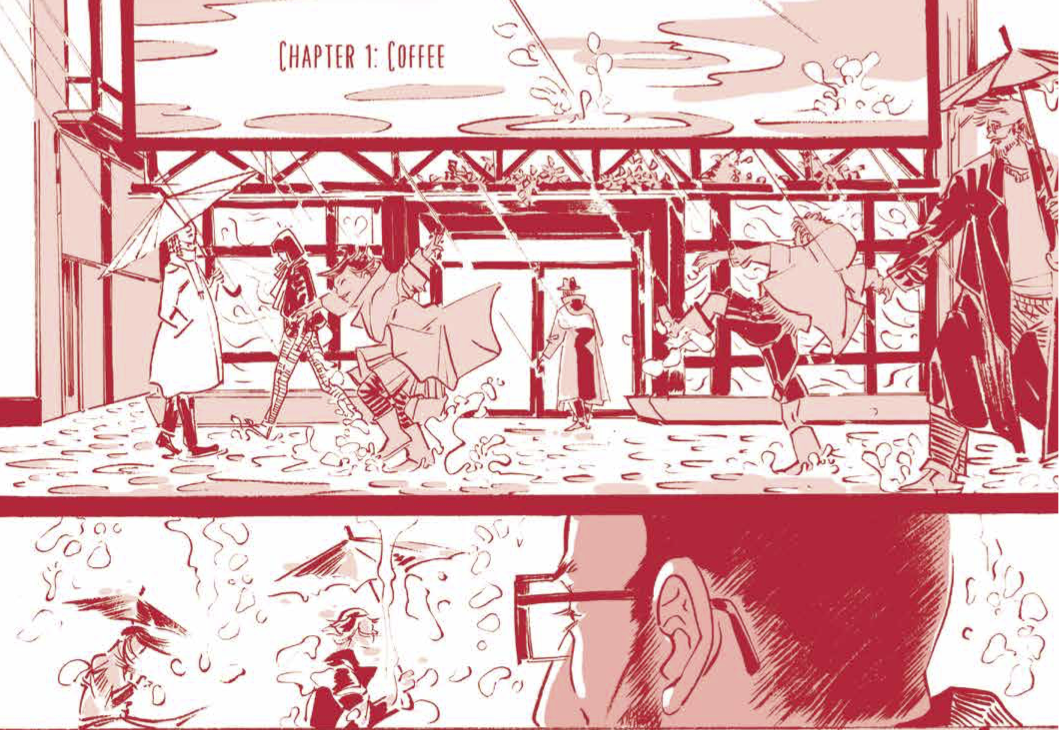 But beyond being visually moving, the story itself is a powerful one that touches on many issues that affect so many of us in this modern world.

I won’t give too much away, but this story could easily luridly declare its themes and discussions as “RIPPED FROM THE HEADLINES.” Of course, that doesn’t convey the subtle art and panel work that makes Rios’ work much more than just sensationalism.

The Graham piece features the return of everyone’s favorite couple from Multiple Warheads in all of their wolf-penis-having-vacationing-from-smuggling glory.

Graham is in top form here. The puns, surreal environment and simplified faces are the perfect backdrop for the slow-paced bizarre adventures we’ve all come to know and love.

Lundoe’s story is exactly the sort of thing this book exists for: A story that defies easy categorization. One that makes a publisher wonder if there’s a market for it.

Skaters, talking cats, fight scenes, intense retrospection, longing and loss. There’s always a market for that, in my mind. 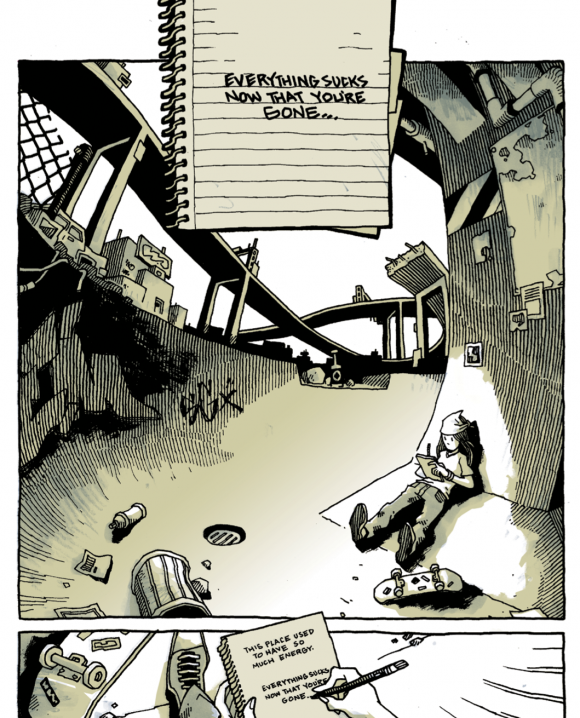 But now, bundled with the “hotter” Graham and Rios, the story will reach a much wider range of people, as it deserves to.

Listen, here’s the point: You’re getting three comics from three amazing talents for about $2.50 each, plus extras — and you’re supporting the kind of medium for comics that can only help make the industry stronger.

Why would you pass this up?!