Once upon a time, an up-and-coming artistic master took on the star of this weekend’s megahit-in-the-making GUARDIANS of the GALAXY!

I’ve loved Rocket Raccoon for almost 30 years. You thought he was new? Let’s get started.

As a wee, weird child of 8, I picked up a copy of Rocket Raccoon #4 at the candy store as a treat for a good report card. The Rocket Raccoon miniseries was created by Bill Mantlo and Keith Giffen.

Little did I know that Mike Mignola would facilitate my love of Giffen characters.

As a weird teen, I’d pick up Lobo and fall in love with another hairy, gun-toting intergalactic swashbuckler. 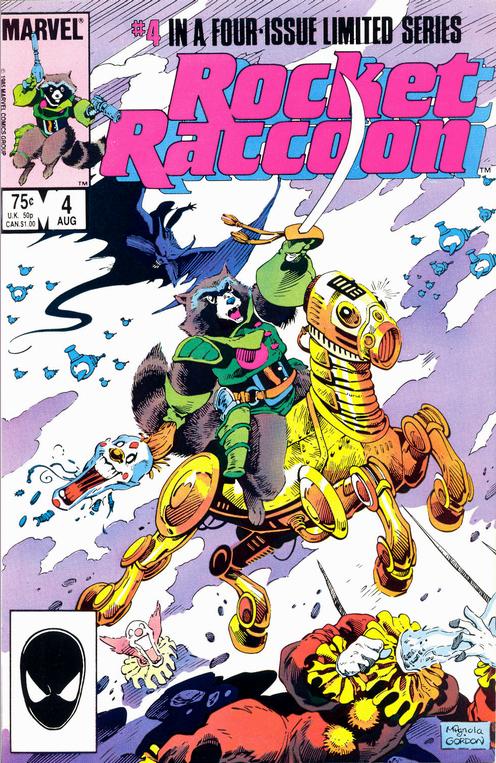 Now, I only bought issue #4 of a four-issue series, so that’s confusing enough. Factor in the epic mythology and imagery of this story — clearly an allegory, but to what I couldn’t tell you.

Two warring toy companies, to my 8-year-old mind, was either about Hasbro and Mattel. Or something bigger, since the toys were entertainment for asylum patients. Was it really about the Cold War? The Cola Wars? The Battle of the Network Stars? I didn’t know. All I knew was that I fell in love with Rocket Raccoon and his bastard bunny friend Blackjack O’Hare.

And the artwork blew my mind. There was something familiar but obviously different in Mignola’s art style. That it would morph and flourish into the iconic, Spartan, block style that is synonymous with Hellboy — who could have known?

It opens with a Punch and Judy puppet show, which captured my imagination, already intrigued by fringe elements such as Renaissance fairs, Mummenschanz, and Frog Thor. The bad guys were clowns with maniacal, toothy grins that they could punch out of their heads and send messages with. Their spaceship was a monolithic Academy Award statue!

Clearly, Rocket Raccoon was the shit. 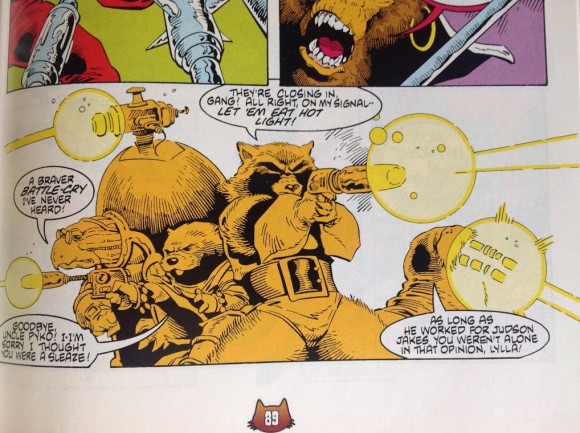 This panel stills gives me chills over the line work. 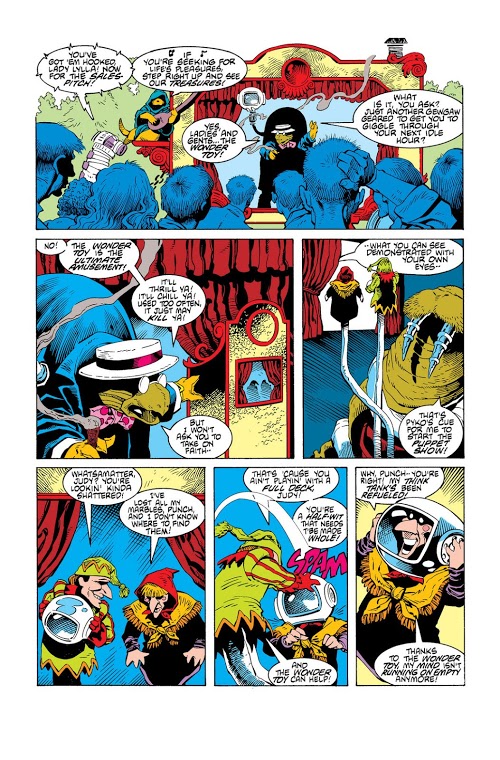 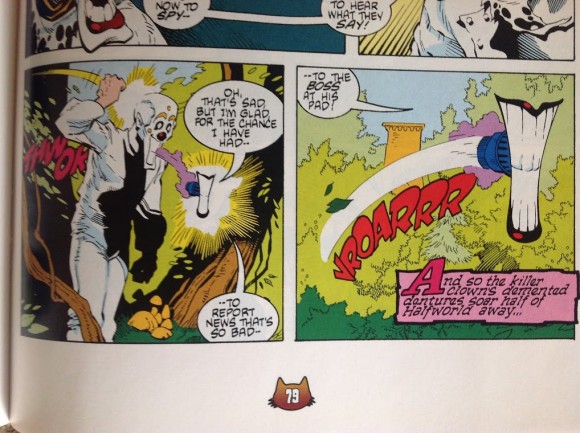 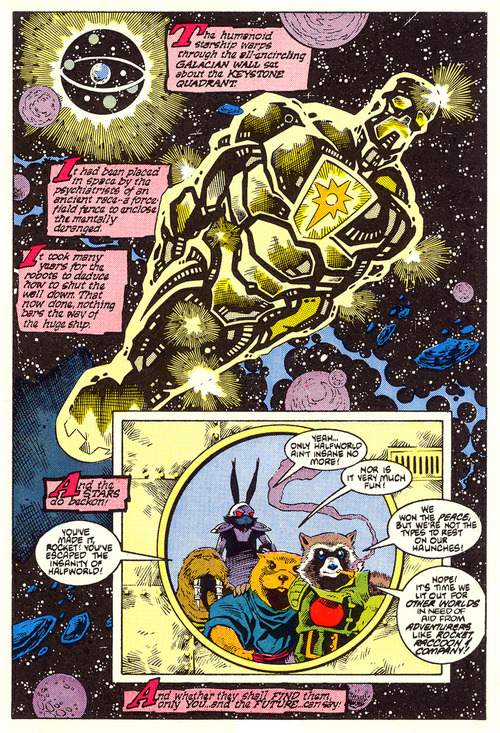 It wasn’t until I picked up a copy of Annihilation 20-something years later, saw that four-fingered rapscallion and a million memories came flooding back.

I ordered the entire four-issue series (and every issue of Marvel’s Elfquest and Peter Porker), and read the story I never finished as a kid. I was even more confused.

What. The f##k? I just re-read it again for this article and still don’t know what the allegory is referencing. Or maybe there isn’t. Maybe it’s just a weird little off-shoot Hulk story that my kid self and I read too much into.

I’m not going to turn this into critical analysis or a comparative study about how the helmets were used to soothe the asylum patients much like television is a mind-numbing escape from reality and blah blah blah. However I will point out a correlation (intentional or not, but it still rings with me) with another exemplary, interplanetary comic – Saga.

Prince Robot IV and his ilk very much resemble the human characters in the Rocket Raccon mini. 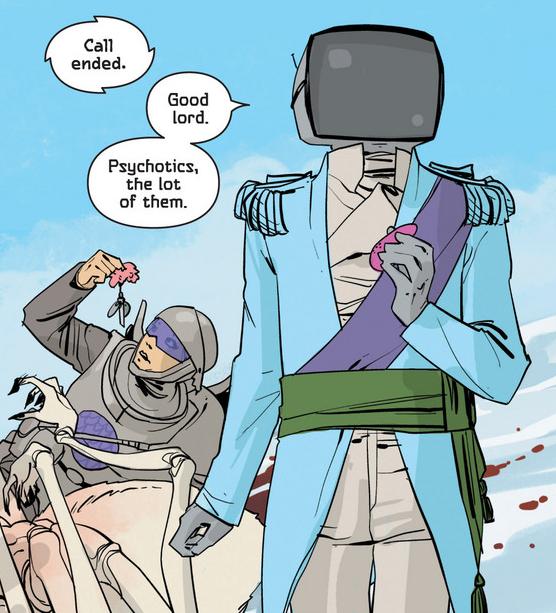 If this ain’t the definition of irony, I don’t know what is.

I’ll leave you with one last insane asylum offshoot, because you’d have to be out of your mind to wear this. Their helmets were for enlightenment, enjoyment, and soothing therapy. This is a beanbag. For your head. 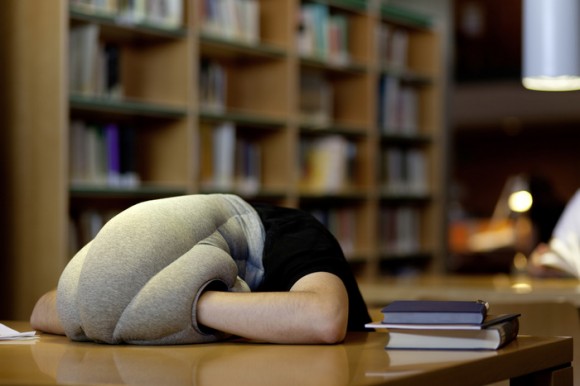 Also protects from falling tomes off of high shelves! 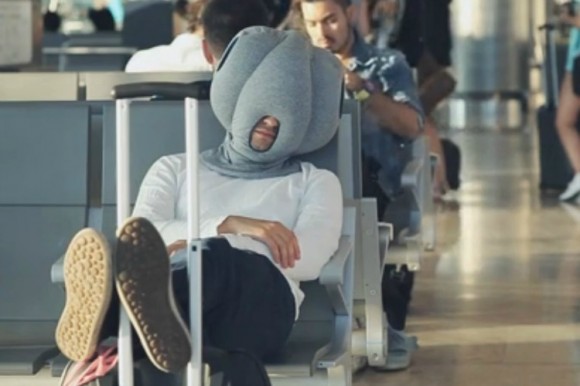 I see this guy at an airport, I’m punching him in the breathe-hole and stealing his wallet.