Rob Kelly is a kindred spirit. He’s a writer and illustrator but he’s also a big, big comics fan with several blogs of his own. Last month, he published “Hey Kids, Comics!: True-Life Tales From The Spinner Rack,” a collection of essays from comics legends, TV and film writers, authors, and others telling their “comic book secret origins” and how comics were influential in their lives. (I’m telling you now, I better be in the sequel, Rob.) Anyway, Rob’s serializing the book here at 13th Dimension, starting today. Look for a new installment every other Friday! We kick things off with IDW’s Chris Ryall:

I was never much of a journal-keeper. I just never felt the need to record daily events in that way. When I was a kid, I mostly used my old Marvel calendars to enjoy the artwork and little factoids that spread out over the months, but not to keep track of time or days.

Instead, like any other lifelong comic-collector, I marked time weekly, as in the one day a week when new comic books were released. When I was a kid, that day was every Friday. Along the way, it moved to Thursday, and now it’s Wednesday. Whatever the day, it was through those new comics that I marked real time, not through any calendars, journals, or watches.

The first time I made note of this way of time-keeping happened after an event in my fourth year. A minor, yet monumental, thing. That was when I ventured down to a neighbor’s house to play, and saw this four-color comic lying on the floor. It was Fantastic Four 130 (January 1973). And that comic’s cover art, illustrated by Jim Steranko and inked by longtime FF inker Joe Sinnott, is singlehandedly responsible for fueling my lifelong love of comics.

In the foreground of the cover is a big rocky guy, and he’s blocking a punch from another man with a giant, sandy fist. There’s also someone stretching his body around a piece of machinery that is being hefted by what is obviously a superstrong woman, who is in turn flanked by another costumed female with an amazing head of red hair. Finally, there’s a dome-helmeted character flying around and shooting a blast of energy from his fist. Soon enough, I would come to learn that this was the Fantastic Four fighting the Frightful Four, but at the time, all I saw were these fantastically colorful characters doing some amazing things, unheard of things in my world. I would soon realize how commonplace the fantastic was in the comics world, and once you’ve experienced the fantastic to that degree, the mundane just won’t suffice any longer.

As if to prove that point, I went back to the neighbors’ again and again, not to play but to read and re-read that issue. I don’t recall if they even had others, but it didn’t matter. Who could need more than this issue, which seemingly offered it all on just its cover alone. In fact, in addition to fostering a love of comics, this issue could have kick-started a life of crime, too – see, I evidently tired of having to walk down the block to my neighbors to read this issue whenever I wanted, so at one point, I, uh, took it. That’s right, I tucked it up under my shirt and brought it home. At age 5, that comic became my entire raison d’être, so I had to have it. My neighbors never seemed to miss it, my parents never questioned where it came from, and since they were already feeding my older brother’s comic habit, one more “comix magazine” thrown into our messy room was never going to catch anyone’s attention other than mine.

The good news out of all of this is that I stuck with comics but abandoned my life as a thief after getting away with this issue. In fact, I can’t tell you much of anything else about that year — not what I got for my birthday or Christmas, not where or if we took a vacation, but I can tell you everything you need to know about Fantastic Four 130.

The first comic timeline in my life was cemented then. But not the last — they continued on.

There were many such moments in between that first exposure and age 12, but it was then, at the cusp of teenhood, that another stands out. At 12, I was sticking closely to what I knew—Fantastic Four, Iron Man, Spider-Man, Hulk, Avengers, and that was about it. But the day my comic retailer handed me a copy of a shiny new series called Marvel Fanfare, time stopped again, and the world opened up wider. Fanfare deserved its title—it was glossier than your normal newsprint book, it was expensive (a buck and a half!), and the back cover, he said, featured a pin-up by this guy who was gonna be the next big thing in comics.

—
Rob Kelly is a writer, illustrator, and comics historian. He is the creator and EIC of the world-famous (no, really!) Aquaman Shrine blog, which just celebrated its 7th anniversary. Some of his other online work includes TreasuryComics.com., JLASatellite.blogspot.com, and HeyKidsComix.Blogspot.com. In the print world, he has written articles for BACK ISSUE! and COMIC BOOK CREATOR.

Kevin Lauderdale of Author Magazine said this about “Hey Kids”: “This book is so incredibly charming. People say ‘must-read’ in relation to a lot of things, but if you ever studied the layout of the Wayne Foundation building or wondered, ‘Who Would Win…?’ this is for you.” 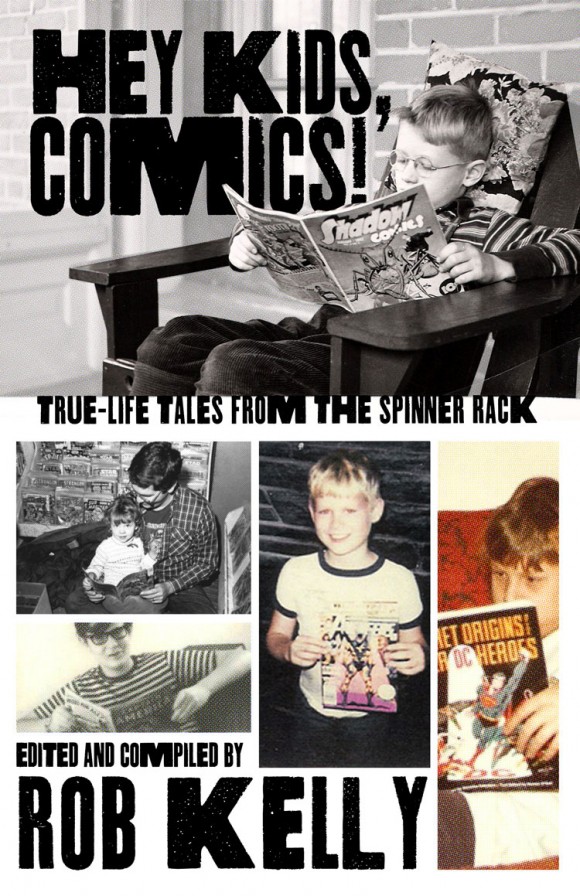