HEROES AND VAUDEVILLIANS: HE DREW ‘EM ALL PT. 2 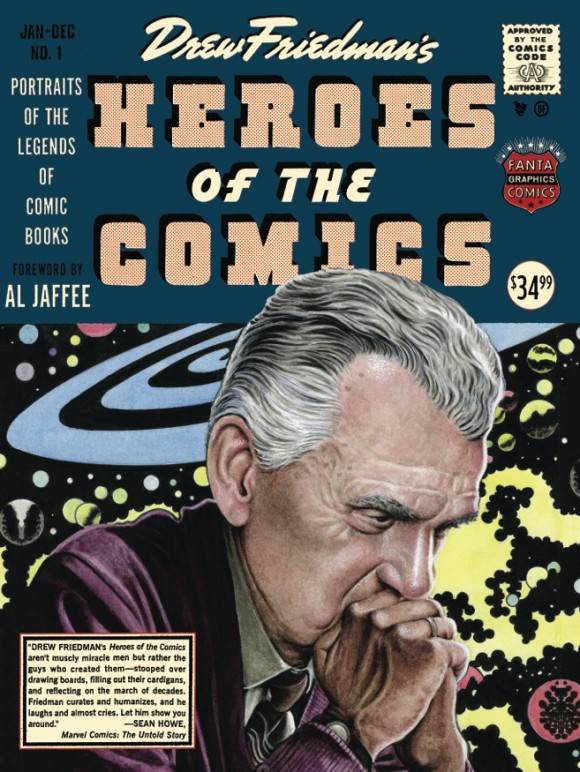 The Living Planet himself, Jack Kirby, graces the cover of Drew Friedman’s upcoming portrait parade HEROES OF THE COMICS.

In Part One of our chat with Drew Friedman, the man who famously said “Liver spots are my NINAs” talked about his love for the weathered and leathered faces of the Old Jewish Comedians that populate his new solo exhibit, on display at Manhattan’s Society of Illustrators gallery from March 5 to May 3.

The son of novelist and playwright Bruce Jay Friedman has another pipelined project to promote, centering around comics of a different discipline — Heroes of the Comics (Fantagraphics), a celebration of the early years of the comic book that bypasses the masked mystery men in favor of the dedicated creators who made their adventures pop. Siegel and Shuster, Finger and Kane, Ditko and Kirby, Kurtzman and Wally Wood — to say nothing of Fawcett artist Ma Raboy and cover kingpin L.B. Cole — are all among the 80-plus portraits included in the volume that further features a foreword by Gang of Idiots godfather (and Friend of the Asbury Park ComiCon) Al Jaffee. Like the Comedians series and the single-volume Sideshow Freaks, it’s a genuine labor of love that confers instant Hall of Fame status upon its subjects.

13th Dimension rang up the passionate portraitist at the rural Pennsylvania home he shares with his wife and occasional collaborator Kathy Bidus, plus beagles. We imagined him having to climb the telephone pole a la Oliver in Green Acres… 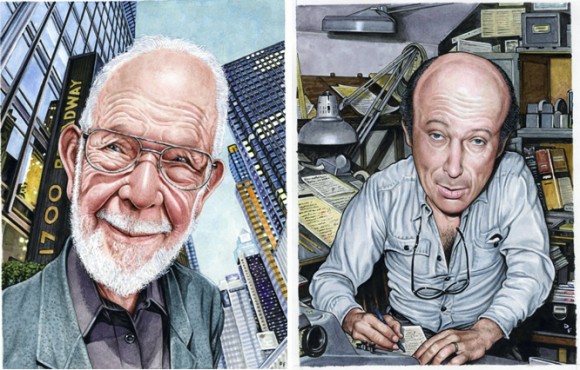 Card-carrying MADmen Al Jaffee and Harvey Kurtzman — pictured in fine art prints by Drew Friedman — are just two of more than 80 pioneers of the pulpy page, paid tribute in the forthcoming volume HEROES OF THE COMICS.

13th Dimension: Here in Asbury Park, a place that you’re quite familiar with, we’ve got a couple of upstanding comics retailers now in our little 1.5 square mile burg…and of course, a very fine ComiCon of our own…

I have noticed that the guest list gets better each year…they get a lot of people I like there; Al Jaffee, Jay Lynch…I dig what they’re doing, and I support it. It looks like a good, manageable kind of event…normally I don’t like doing them; I went to the New York show two years ago and it was just a mad crush of people; all Marvel and DC, and all these people in costumes. I had kind of sworn off any more shows, but now that I have this book coming out that’s really targeted for those kind of events, I’d love to make it happen for next year’s.

The stuff I’ve seen from the forthcoming HEROES OF THE COMICS looks great, of course…but I have to say that this has got to be even more of a labor of love than all your previous projects. It’s such a tight little niche; zeroing in on the relatively few people who know the names of all the people you drew, let alone have any notion of what they looked like…

I didn’t plan it out that way. It sort of evolved, when I was hired by the son in law of Will Elder, after Elder died, to draw him as a gift to his wife and daughter. They really liked it, and I liked the way it came out, so I said maybe I’ll do a companion piece, and I did Harvey Kurtzman, who as you might know was one of my instructors over at SVA. I wrote an essay about Harvey also, and I said I think I’m on to something, let me do all of the early MAD artists.

And from there I expanded it to all of the EC artists: Johnny Craig, Jack Davis. And from there I started adding in the Golden Age artists, editors and publishers…Jack Kirby, Siegel and Shuster, Bob Kane, Bill Finger, funny animal guys. Eighty-two portraits, only of pioneers from like the first 20 years of comics, before the Comics Code came along and watered everything down. Steve Ditko also…a lot of the Silver Age guys got their start in the Golden Age. But I drew the line at Neal Adams, Steranko, guys who came along in the late 60s.

I never had a desire to draw superheroes…this book is as close as I’ll ever get to it, with little touches like the Batman logo just to place the guy in the historical context. Actually, I showed model sheets of Captain Marvel Jr. on the wall behind Mac Raboy, who presented a real challenge. I found no photos of him, just one very hazy image from the 40s, but I worked with that and I was pleased with how it came out.

And Ogden Whitney — you know, the creator of Herbie — I have never seen a photo of him anywhere, and I don’t like to pester families for their old private pictures. People sometimes get nervous when they hear that ‘the guy who draws liver spots’ wants to do a portrait! But I really wanted Whitney to be included, and all I had to work from was an old self-portrait that he did.

You seemed to have a knack, whether through a combination of luck or sheer hard work, to arrive in the right place at the right time…you were there at RAW Magazine, and at Spy, and at Topps Gum Company when it experienced a real modern renaissance…where would you say the action’s at these days, for an artist that wants to really catch the leading edge of what they’re gonna be talking about in the months to come?

I have no advice to offer, really. I’m kind of a thing unto myself, not to brag about it, but it’s difficult to apply whatever lessons I’ve learned to anyone else’s situation.

People still come up to me and ask about stipple, though…and I tell them that I don’t recommend it. It was slowing me down, I was getting bored with it, and just like R. Crumb warned me, it was starting to affect my eyes. Plus I felt that after all that time I was kind of hiding behind it; using it as kind of a smokescreen for drawings that I wasn’t always happy with.

With your dad working for Magazine Management back in the mid 1960s, you were getting Marvel comics by the bushel-load, right at the time that they were really finding their groove, when everything was new and the possibilities seemed limitless. My own take, as a little kid who was just struggling to learn to read around 1965, was that I was getting in on the ground floor of something really exciting, especially compared to something like SUPERMAN, which still looked like some stodgy public-service comic from the 50s. The rules were changing month by month, issue by issue as the 60s progressed, and I felt like I had a ringside seat…

I didn’t have much of an opinion on it back then as a kid…I write about this in the introduction to my new book…but there was the sense that the early Marvel stuff was a little more sophisticated than the other stuff on the racks; they were the upstart, the ones who were shaking things up. Plus I loved the smell of them! I was getting stacks of them…and I was never a collector…but I picked up on Kirby and Ditko and what they were doing. Then as I grew a little older I did an about-face and discovered Jimmy Olsen! I just loved that here was this guy, this eternal cub reporter, who every month was turning into a werewolf, or a big lizard, or a rock singer, or Nazi officer or whatever…I guess I loved DC then because it was maybe cheesier.

Then I discovered Robert Crumb, and picked up on the undergrounds immediately. After that I started picking up on the old EC stuff, and grabbed as much of that stuff as I could find. I sold off all of my comics years ago…it was a big part of my life, but I don’t think you need to be moving them around with you all the time, to appreciate them.

I hate to do this to you, but…Jack Kirby or Stan Lee?

I admire them both…Jack was a true artist; I put him on the cover of the book, contemplating the universe that he created. And Stan, I get off on watching him in action; still plugging away.

I love drawing Stan, and I’ve drawn him at different stages of his life. There’s old Stan, with the hair transplants and the big phony grin, posing with people he doesn’t even know. And there’s the pre-toupee Stan from the mid-60s, who was every bit as charming, and who I got to meet a few times…and who told me ‘kid, you’re gonna work for Marvel someday!’ I was drawn to the Bullpen, got to see first-hand how they got everything together, met people like Marie Severin. And then a little later on I did work there in the office for one week, so Stan was right…and now I feel like I can comment on all of that, because I was there, for one week!

Take it here to pre-order Heroes of the Comics, out this summer from Fantagraphics Books…and check out Part One of our interview with Drew Friedman, right here at the 13th Dimension!