I didn’t get a chance to go out to Brooklyn from the wilds of the Jersey Shore this past Saturday for the Grand Comics Fest.

So here’s the next best thing; an interview with the promoter of the show, comic creator Pat Dorian: 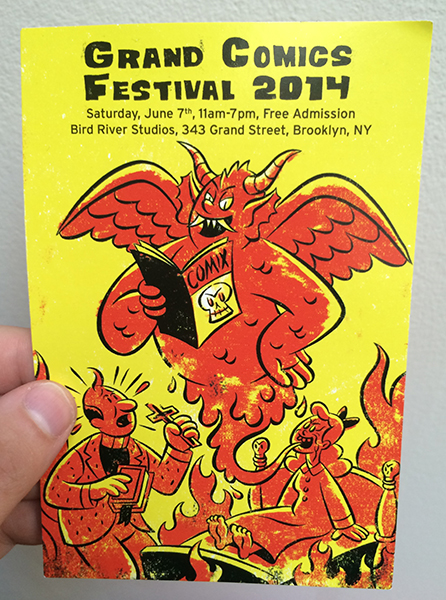 This was the second year for Grand Comics Festival. Last year was my first time organizing anything on this scale – and I learned a lot. This year I knew more what to expect and I didn’t have to work quite so hard to get the word out about the show this year. I think it ran much smoother. Last year I was a total newcomer as an organizer and I had to push it to get the show noticed. This year Alden Viguilla, one of my exhibitors, told me that when he handed out postcards for Grand Comics Festival while he was at MOCCA people were like, “Oh, I’ve heard about this!” and “I heard great things about this last year” which is encouraging. This year I was overwhelmed by the number of applicants – more than I could accommodate – but that was pretty exciting too. 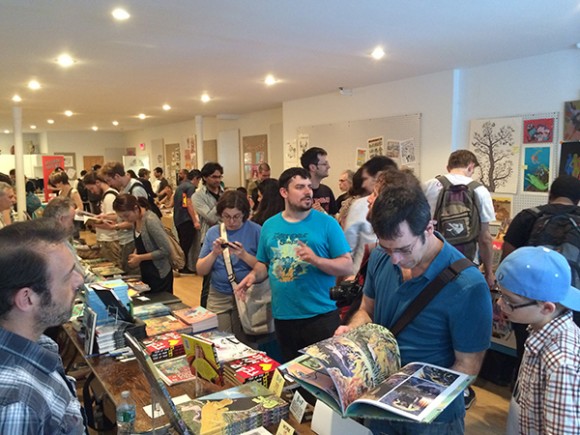 Who were some of your exhibitors? 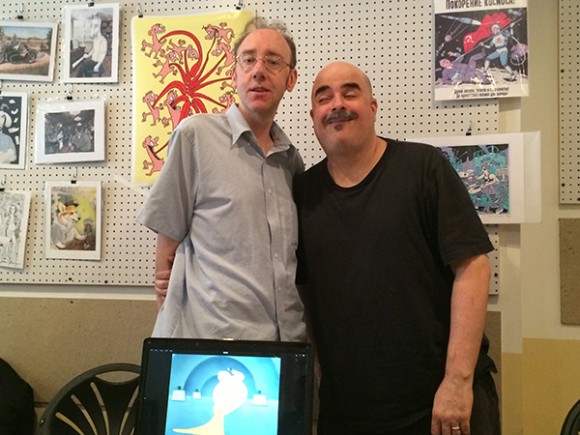 What was the vibe of the show? Were exhibitors happy? How were sales?

I started Grand Comics Festival to provide an alternative to the bigger comics shows in New York. I want the show to feel comfortable for the exhibitors and the visitors, and to create a space where cartoonists could have real conversations  with people interested in their work. The vibe I’m trying to create is laid back and casual with an emphasis on the work of the exhibitors, which is often original and handmade. Small is part of the point of Grand Comics Festival. It’s not a fancy show – it’s in a community space beside the BQE, we had music playing, we ran around the corner for sandwiches and burritos, box fans kept us cool. Jess Ruliffson, an exhibitor this year, told me, “The intimate scale of the festival allows for more in-depth exchanges with veteran and cartoonists interested in my work.” The price of tables also contributes to the vibe – at $50 a half table exhibitors don’t have to worry quite so much about breaking even and can relax and enjoy themselves. Most exhibitors reported good sales this year. Dave Kelly of So What? Press said, “Our sales were definitely up from last year, but honestly, we’d be there one way or the other. Selling comics is crucial to our existence but so is having a good time with a great group of creators and attendees.” Matt Moses of Hic + Hoc said, “The second Grand Comics Festival was a great day with constant traffic, solid sales, and just the right level of weirdos to keep things interesting.” For me, comics are about fun and that’s really the vibe I’m trying to create at Grand Comics Festival. From the feedback I got this year I think we did pretty well – I had a great time! 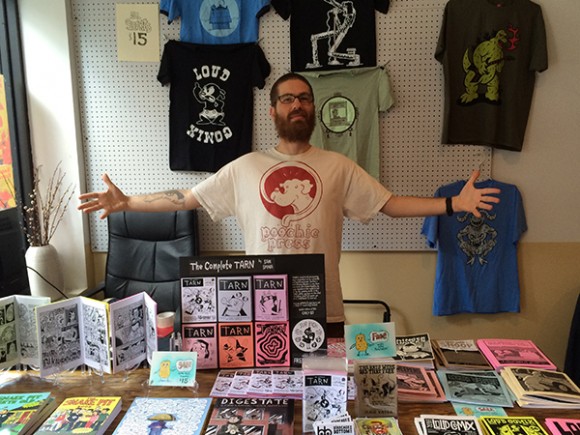 If I wanted to make money I wouldn’t be in comics! But honestly, I don’t really have a business model. Last year, it was a trial by fire and I learned a lot. This year, I had a much clearer idea of what my budget was and where I wanted to spend the small earnings from table sales. At this point this is a side project for me, I have a day job that thankfully pays my rent, so for me it’s more important to have this affordable and affable space for indie artists to show their work.

Do you plan to expand the Grand Comics Festival? What are the plans for the future?

My priorities are keeping admission free, table costs low, and the atmosphere intimate. This means that Grand Comics isn’t moving to the Javitz Center any time soon. However, I was thinking of going back to a two-day festival but having different exhibitors on each day. We’ll see what kind of interest there is and how much my wife lets me out of the house.

What happened at the end – everyone go to the bar or just go home and read comics?

The group was divided: Mexican vs. Chinese. Some of us didn’t make it to either.

I sold a lot of comics but my wife bought a lot, so I figure it evens out.

How’s your own projects going?

Thanks Pat! Best of luck with all your endeavors!