Three and a half years with one of comics’ greatest characters.

Dick Grayson is one of my all-time favorites. He’s always been a great foil for Batman but in the hands of the right writers, he’s singularly compelling.

Tim Seeley’s been with the one-time Boy Wonder for about three-and-a-half years, between Grayson and Nightwing, and his final issue — Nightwing #34 — is out 12/6. (He recently took over Green Lanterns from Sam Humphries — who’ll be taking over Nightwing’s adventures next issue. He also has a new Vertigo book, Imaginary Fiends.)

I sat down with Tim at New York Comic Con and he had a lot to say about his time in Bludhaven — and traveling the world — with the erstwhile Agent 37:

Dan Greenfield: A couple years ago, I talked to you and Tom King about Grayson and the thing that I took away — that I was really looking forward to — was that you guys had this long plan for 50 issues, this whole big idea. Obviously, that didn’t happen. But, you got to see it through with Nightwing. Did you get to accomplish everything with the character that you wanted to accomplish?

Tim Seeley: Yeah, I mean — it was a little harder than I expected to transition it back to Nightwing, I think, because, the way I thought of it, he was a guy away from his family. … So we modified a lot of the plans to be Nightwing stories and that means he’s a guy who has a home base, who has a family surrounding him. And that was hard. But I think we made it work, eventually.

Y’know, I had to find a way back into Bludhaven and make it something I was interested in. I had to find a way back into Blockbuster, cause those were things I felt like I’d already seen done. I’d seen them done well and I didn’t necessarily know what I could add to them. Especially because Rebirth, part of it is rebooting and remixing, in a lot of ways, the things that people love the most. And so certainly Bludhaven and Blockbuster are two of those things.

But we kept the elements that I think the fans like the most. The things we added that were new — I got to do some of the globe-hopping, travelling guy thing that we started in Grayson in Nightwing. We still made it so that this is a kid who grew up travelling with the circus, he doesn’t necessarily have need for a home base, so that meant we could send him on stories across the globe and have him fight Doctor Hurt, and go all over the place and still make it work. 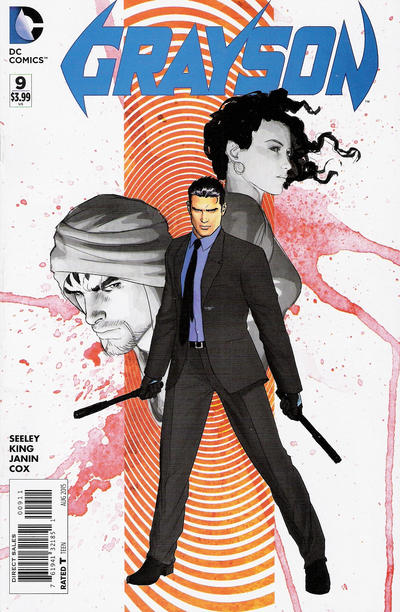 Dan: Now, over 30-some-odd issues, you introduced new characters. You introduced Raptor, you brought him back to Bludhaven. You gave him a new/old girlfriend. The pregnancy scare. Doctor Hurt … Agent 1. Of all of those issues or all of those arcs, what was your Nightwing? The one that you really thought hit it and spoke most to what it was you were trying to get across with the character?

Tim: I would say the first four issues, and then when we came back and finished up the Raptor arc. I think those are the best. I think it’s the most pure Dick Grayson story, but it’s also a different Nightwing story. It wasn’t in Bludhaven, it wasn’t about cops, it wasn’t about any of that sort of stuff. So I feel like that was the — that’s the biggest contribution probably that we kinda came up with that’s new, but also feels classic and feels like the character.

And then I think a lot of elements of the Nightwing Must Die! storyline, where he was teamed up with Damian — it didn’t come out exactly the way we wanted because of the way we had to time things with Metal and stuff. We had to change some things. But I still really liked the relationship between Dick and Damian in that story. I really liked the relationship between Dick and Shawn/the Defacer in that story. I think that stuff really works. And then, I think, all of it comes together in this last arc. … I think Issue #32, which is basically Dick and Raptor playing poker for a whole issue, is probably my favorite issue of the run. I think it’s probably the best one. 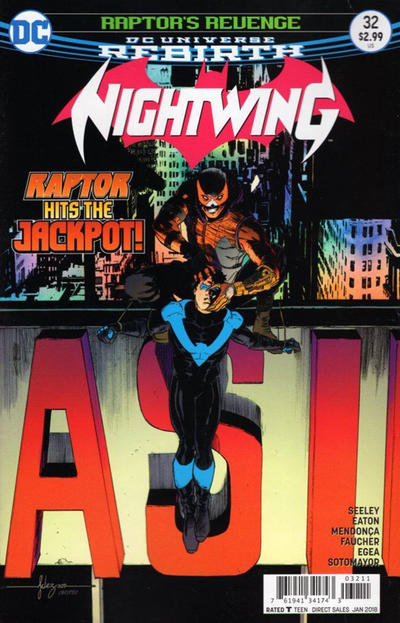 Dan: Writing Dick and Damian, given how much people seem to love that pairing with what we originally saw from Grand Morrison and what we’ve seen from other writers — was that at all intimidating to take on? Personally, I thought you hit it. But as a writer, when you’re going into something like that, do you think about what other writers have brought to it — does that weigh on you when you sit down to type?

Tim: Yeah, it makes it funny, but it also makes it heartfelt, ’cause Damian’s still a kid. Y’know, like, part of the thing is he has to be — he’s got basically the personality of Wolverine, except he’s also 13, right? Like, all the things he does that are despicable and horrible or badass can be also be the things he does because he’s going through puberty. Y’know? It has to be both those things at the same time. 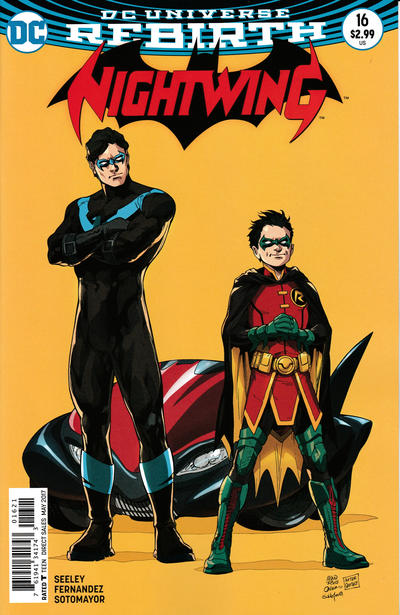 Dan: Which of the two characters, since they’re present and former Robins, do you prefer?

Tim: I like them both. I mean, Dick is one of my favorite characters. You can’t work on him for three and a half years without him becoming that, y’know? I think Damian is actually a — I don’t know it’s weird. I think Dick is a perfect Robin because the idea was that he lightened Batman. I don’t know if Damian works as well as a Robin for Batman — Bruce Wayne Batman — because he’s his kid and it sort of makes you ask a lot of questions about endangering his kid or that kind of relationship.

But when you put it with Dick, it totally makes sense. Dick was there to brighten up Batman, and then if the relationship is switched with (him being) Batman, then his job is to keep Damian from becoming a villain. Which is great. I mean, it’s a perfect creation. Grant deserves all the credit in the world for coming up with it. 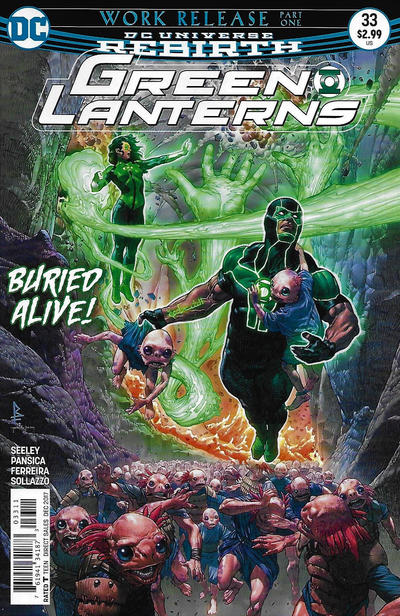 Dan: Now, moving onto Green Lanterns. That’s a different kind of book than what you were doing with Nightwing. As a writer, obviously, you have different gears that you can shift into, but what made you want to jump from this character to those characters? Nightwing comes with a lot of baggage, going back, if you want to count the Robin years, almost 80 years. Everybody’s got an idea. But these two particular Green Lanterns are still, relatively speaking, blank slates. What made you want to get into it — and did that have anything to do with it?

Tim: Well, I mean that’s absolutely it. As much as I love Nightwing, the fans are tough. After a while, there’s a certain sort of thing that you have deal with, with really passionate fans, which is great in some ways, but not so great in other ways, that it just kinda tires you out, y’know? And at a certain point, I’m just fighting their expectations, which gets hard.

Green Lanterns represented infinite possibilities because one, I don’t have to set it on Earth, and two, like you said, they’re relatively new, and their relationship is pretty fresh. I mean, I think what Sam (Humphries) set up is they’re two people who couldn’t be more different, but they’re best friends and they need each other. It’s perfect; that’s a really interesting dynamic and I wanna keep doing that. I also wanna be able to tell weird stories about, like, y’know, crazy aliens and just have a good time. 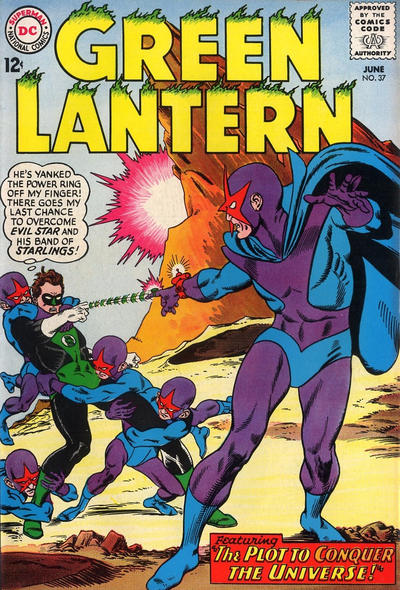 Dan: Can you bring Evil Star into it?

Tim: I actually was thinking about it.

Dan: I’ll know I’ve done my job if I can somehow sit here and convince you to bring in Evil Star.

Tim: I would use him, I love that stuff. The weirder the stuff in Green Lantern, the better it works. I mean, I saw a cover, I haven’t read the issue, I picked it up — it was Evil Star by Gil Kane — it was Hal Jordan and he’s surrounded by all these, uh, basically, like little people —

Tim: Little Evil Stars. It’s so weird and it’s awesome. I love that stuff. Y’know, there’s no rules for space dudes, right? So, lets get crazy with it, like it doesn’t have to be grounded. As long as it’s emotionally grounded, about the core of these characters and what they deal with in their lives — we can go crazy as hell with the villains.

This interview has been condensed and edited for clarity.