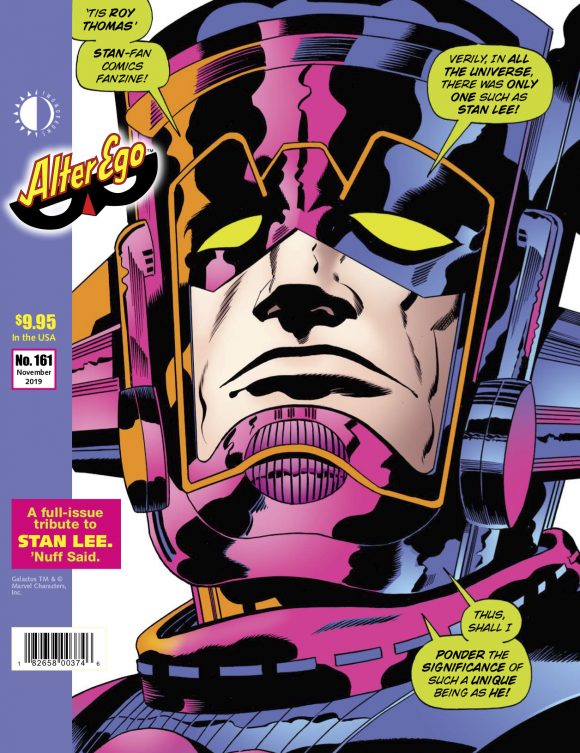 Roy Thomas’ Alter Ego #161 is out this week – Oct. 16 – from TwoMorrows and it’s chiefly dedicated to his mentor Stan Lee, who died nearly a year ago. 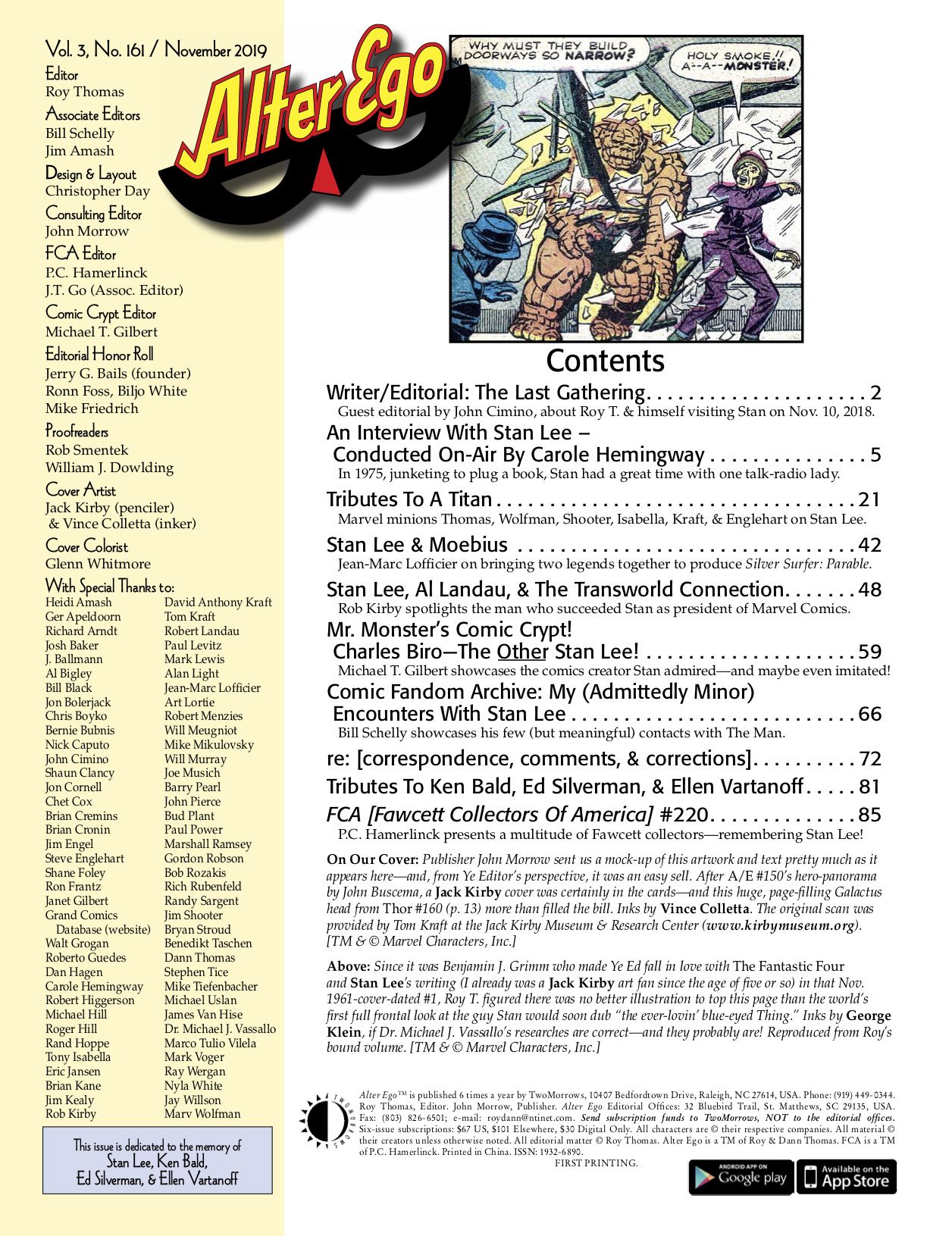 As you see above, the issue is jammed with Lee features and remembrances but for me, there was no question that our regular EXCLUSIVE EXCERPT would be Thomas’ account of his final meeting with Stan the Man, just two days before he died.

It’s a moving story, told by someone whose own storied career was guided by a visionary who changed popular culture forever. — Dan 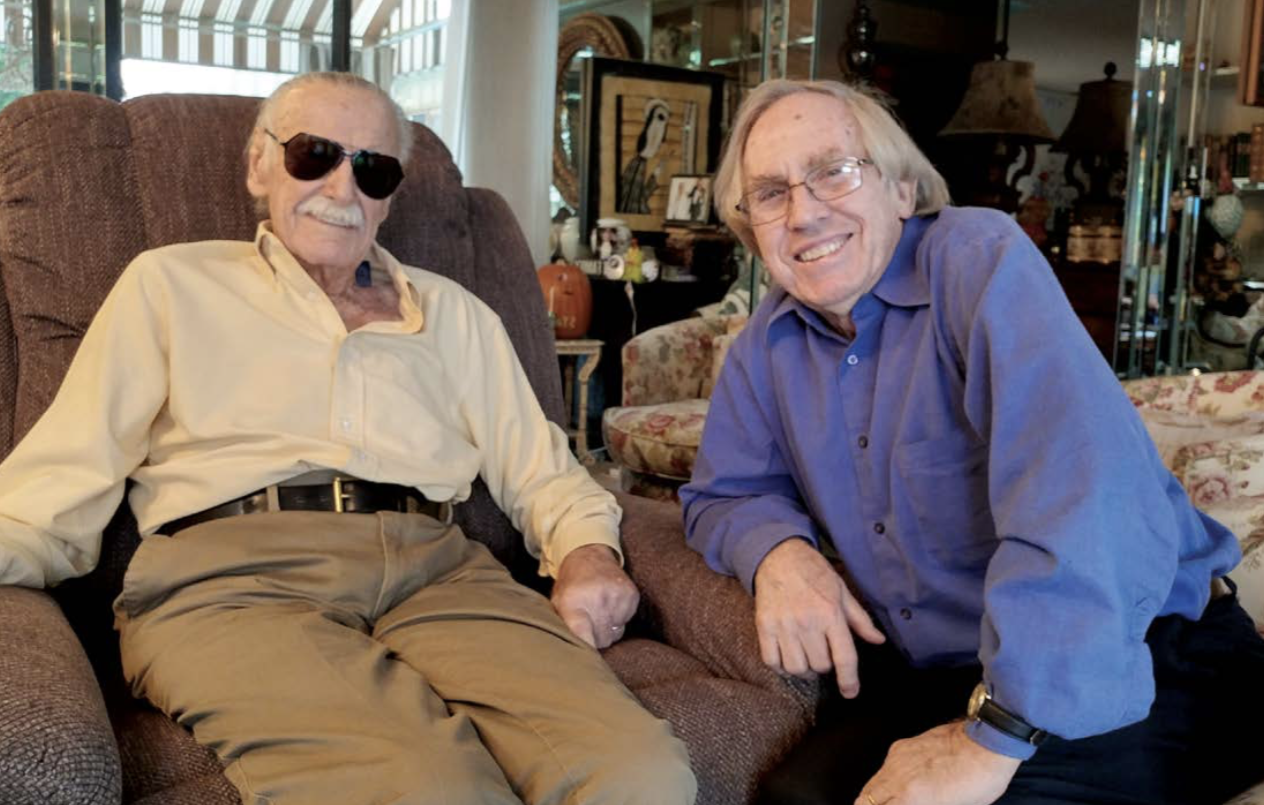 At around 3:00 p.m., John and I were greeted at Stan’s gate by (Stan’s assistant) Jon Bolerjack and a fit-looking young man who I assumed was there to help with any heavy lifting that was needed. With John hanging back, Jon B. escorted me in to see Stan, who was sitting dressed casually (but nattily) in a big stuffed chair, his trademark sunglasses firmly in place. He sat facing a gigantic picture window, with a swimming pool and patio directly outside.

After a slightly weaker than usual but still jaunty “Hiya Roy,” he went on: “You know, this trying to live to be 100 isn’t turning out to be nearly as much fun as I’d hoped it would be.” I figured he might’ve greeted one or two others with that joke, but I appreciated it just the same.

I told him he was looking fine—and, given what I knew of the fragile state of his health recently, that wasn’t too far off the mark. I gave him greetings from Dann. He asked how she was, and how our “farm” and all the animals on it were. I told him everything was going fine.

I mentioned how amusing I found it that I’d be sitting in a tiny audience in Columbia, South Carolina, watching a Marvel movie (I usually go to matinees to avoid crowds) when suddenly that film’s “Stan Lee cameo” would come on, and there would almost always be someone even in that tiny audience who would laugh and/or start applauding. He said he wouldn’t mind doing more of them, if they could find a way for him to do them without his having to sit in a chair for hours having makeup applied.

After a minute or two, somehow the subject of Martin Goodman came up. Stan got a bit agitated, talking about how his publisher/uncle hadn’t liked the idea of Spider-Man, saying that people didn’t like spiders… how Goodman had thought that only adults, not teenagers, could be heroes… and how opposed Goodman had been to the idea of super-heroes having personal problems, which he didn’t think would interest people. I expressed the thought that perhaps the last big creative decision Martin Goodman ever made was commissioning Stan to make up a new super-hero group in 1961, and then getting out of the way. Stan kind of liked that.

He abruptly spoke of how he couldn’t understand why the hell the original Spider-Man movie people hadn’t ever had Mary Jane say the phrase “Face it, tiger… you just hit the jackpot!” He was quite forceful about his feelings on that one. I concurred, because I’d had the same thoughts when watching the first film—although we agreed it was pretty good otherwise. 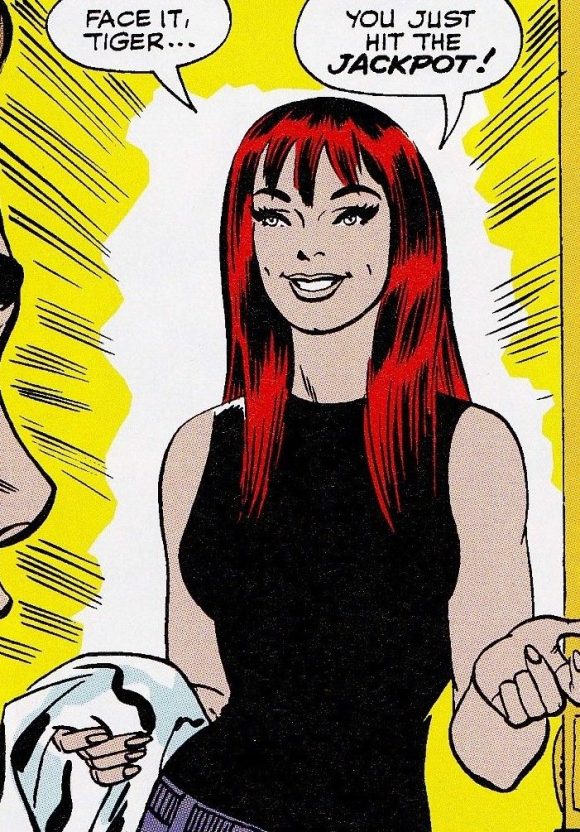 He asked me how the Spider-Man strip was coming along, and I said fine. I mentioned that recently I had had Aunt May and the Mole Man almost get married, but that didn’t seem to particularly register with him. So I didn’t explain further; it didn’t matter.

At this point, apparently by a prearrangement I knew nothing about, POW! Entertainment exec Bob Sabouni (from Stan’s company) dropped by, carrying what was the first true hot-off-the-presses copy of Taschen’s The Stan Lee Story, which I had written after Stan himself had recommended me for the job (back in 2013!).

Because the huge book weighed 15 pounds or more, Jon B. put a pillow on Stan’s lap so its edges wouldn’t bite into his legs, and Bob gave us a brief guided tour of it… even though we
both knew that Stan’s macular degeneration didn’t allow him to see much of it that clearly.

The book fell open to a double-page spread from the World War II years of Stan’s character the Destroyer battling a bunch of German soldiers. Stan related to us that Taschen publisher Benedikt Taschen had come to see him a week earlier with a slightly smaller mockup of the book and had pointed out that very spread, saying it was from a time “when our two countries were fighting each other.” Stan says he’d immediately responded, “Yeah, and we beat your asses, too!” But it had been a good-natured exchange. That war was almost a lifetime away for Stan, and Benedikt Taschen had been born some years after it ended. 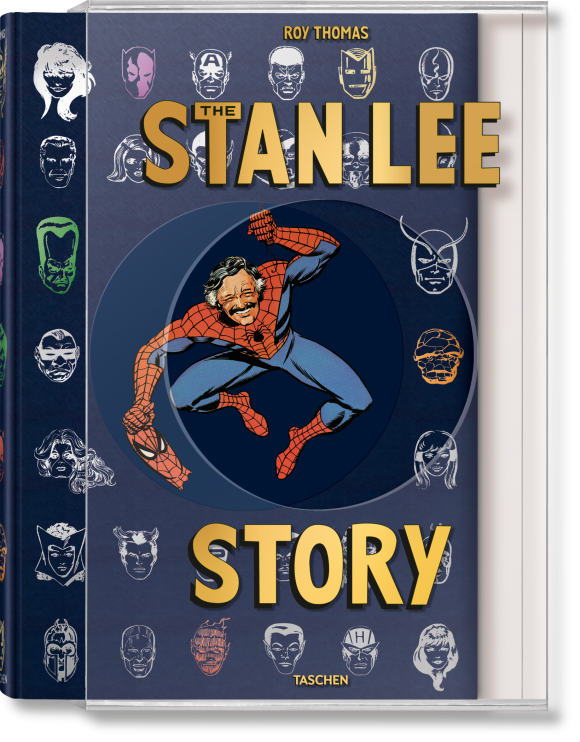 I told him I appreciated the fact that the only change he asked for in the book’s text was for us to treat “comicbook” as one word—something I’d always been inclined to do, too. He repeated his preference for seeing it spelled that way.

When Stan was told that the price for that 1000-for-sale copies of this special edition would be $1,500* per, I could almost see his eyes widen behind those dark glasses. “Who the hell’s gonna buy it?” he asked with a shock that might have been partly feigned, or wholly real.

At about this point, I realized he was beginning to get tired. Jon B. ushered Bob Sabouni off first, so Stan and I could say a few more words. Then Jon brought in John Cimino, whom I introduced as my manager and friend. Stan grasped John’s hand earnestly and said, with all seriousness, “Take care of my boy Roy.” John and I both choked up at that, having no idea of what to say in response.

With Stan’s and Jon’s permission, John took a couple of photos of Stan and me—then Jon B. snapped one of the three of us. After which John and I said our goodbyes and departed.

Stan’s final words to us were, “God bless.” 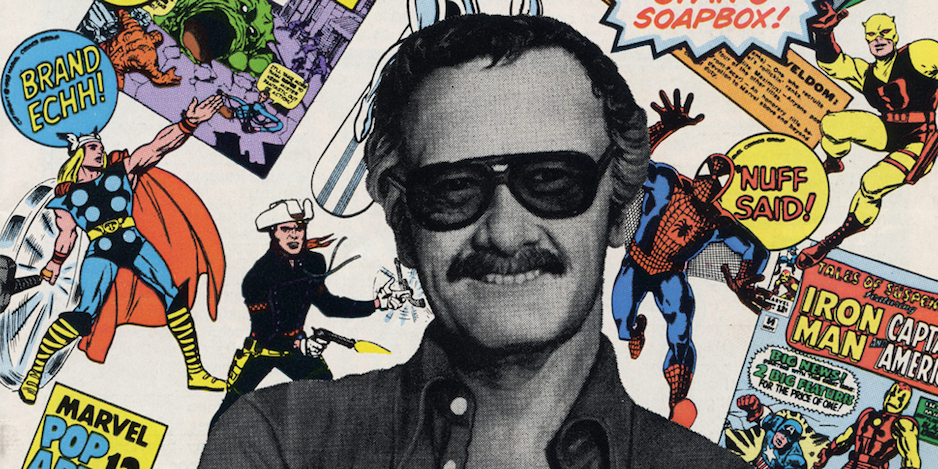 From the cover of Marvel Age #41

Alter Ego #161 is due out Oct. 16. You can find it at your local comics shop or get it directly through TwoMorrows. (Click here.)