GO APE and BUY THIS BOOK!

The Sacred Scrolls: Comics on the Planet of the Apes is a must for Apes and comics fans! With an essay by yours truly! All you Apes fans out there are gonna want to get your stinkin’ paws all over this one from Sequart. It’s edited by Apemavens Rich Handley and Joseph F. Berenato, and includes a wide array of writers.

Check out the Table of Contents here (from an Amazon screen grab): 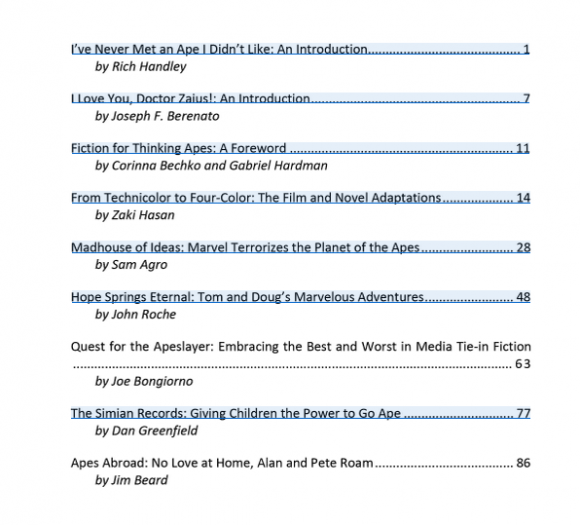 Basically, we all wrote about a different aspect of comics and the Apes, such as Marvel’s ’70s output and Boom! Studios‘ excellent line.

Me, I wrote about the awesomely kitschy Power Records books — and coloring books! — from childhood. Anyway, I’ve been a professional writer and editor for more than 25 years and this is the first time I’ve been included in a book, so, y’know, FANCY!

I do want to thank Rich — who’s written about POTA and comics here — and Joe for including me. But more importantly, you should go and get this because there’s a lot of great stuff here from a lot of cool people.

You can get it at Amazon right now!

Now, excuse me, I have to get back to studying the Sacred Scrolls …