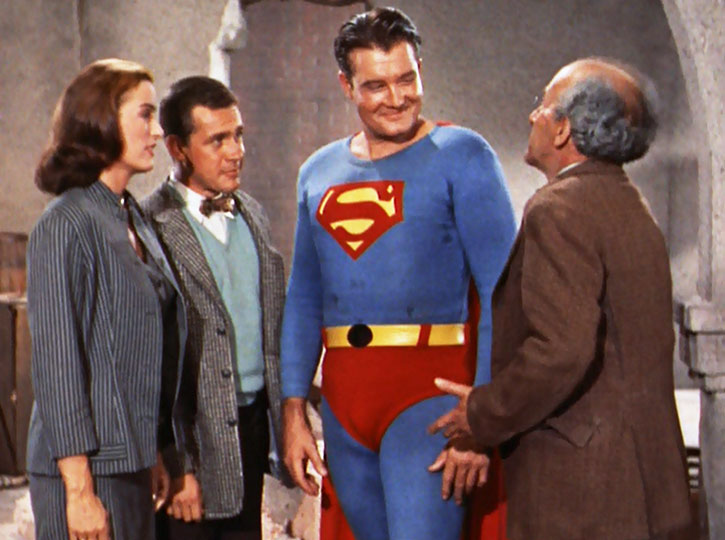 “Faster than a speeding bullet…”

Whenever I’d hear those words, no matter where I was in my parents’ apartment, I would sprint toward the television because it was time for the Adventures of Superman!

“Yes, Superman — strange visitor from another planet who came to Earth with powers and abilities far beyond those of mortal men!”

As a child in the early 1960s, I wasn’t aware of who played the dual role of Clark Kent and Superman — all I knew was that he was a nice guy and someone who would protect you and that you could feel safe around — whether he was a “mild-mannered reporter for a great metropolitan newspaper” or the Man of Steel.

And later, I would learn that Superman’s benevolent charm came down to the acting ability and natural charisma of the late George Reeves, who was born 109 years ago on Jan. 5, 1914. Even when he was playing Clark Kent, Reeves couldn’t bury it. Sure, he was supposed to be mild-mannered but that aspect was played down — except when he had to slip away to change into Superman! Reeves’ Kent was nearly as popular to me as his Superman.

Because the Adventures of Superman episodes had to follow a strict format to get through a lot of plot in a scant 26 minutes, there were certain things that kids could count on in each of those episodes: Boys and girls marveled as Clark Kent ducked into a storeroom to change into Superman. And it seemed mandatory for him to leap out of a window to take flight — often to save cub reporter and photographer, Jimmy Olsen, or ace reporter, Lois Lane.

But those stock flying scenes were no match for Superman crashing through walls — office walls, cave walls, cabin walls, home walls — you name it, Superman crashed through them!

And who was the stuntman who demolished all of these partitions? Why it was George Reeves himself. Often covered with soot, dust, or the residue from crumbling plaster of Paris in the aftermath, Reeves took it all in stride — sometimes breathing in clouds of fine particles! 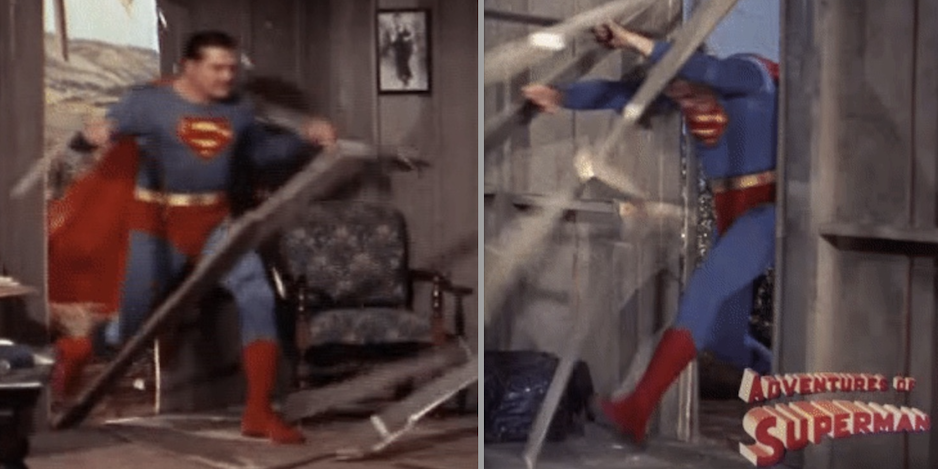 Watching those episodes now, it’s a hoot when there is a door literally next to the hole Superman just made in the wall. But as a kid, that didn’t matter. You didn’t have to wonder who would fix the property damage caused by the Man of Steel or the cost. Imagine the insurance claims! Actually don’t, just suspend your disbelief and be a kid again!

Adventures of Superman – S5E4 – The Tomb of Zaharan

Adventures of Superman – S6E13 – All That Glitters

And here’s a 13th Dimension lagniappé: In “All that Glitters,” Jimmy Olsen gains superpowers and crashes out of Professor Pepperwinkle’s cabin a la Superman! Later, Superman (as seen in #13) crashes through the same spot after Pepperwinkle presumably fixed the wall!

Adventures of Superman – S6E13 – All That Glitters – BONUS