Beginning the THE GEOF DARROW INTERVIEWS with a salute to a master. 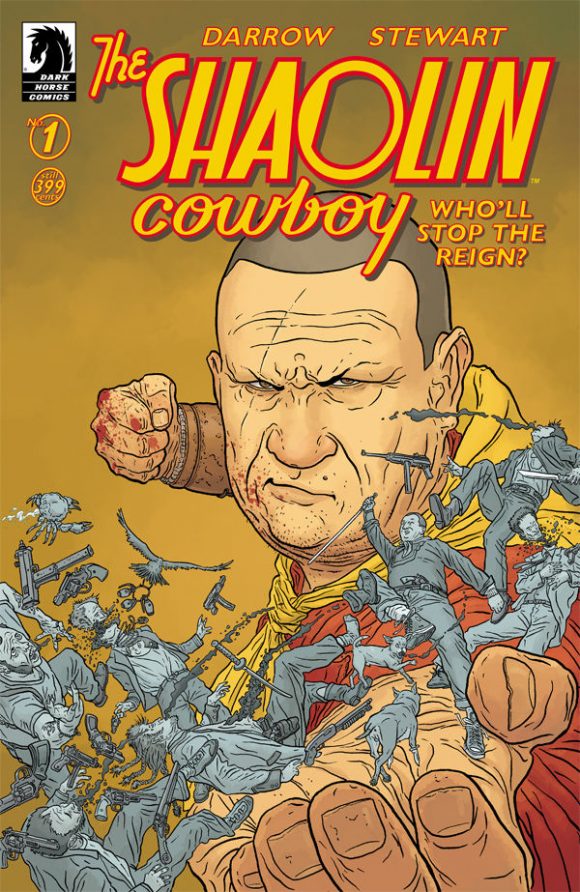 G.D. Kennedy recently spoke with Shaolin Cowboy artist Geof Darrow about his new Dark Horse series, his upcoming retrospective book, Lead Poisoning, his work on The Matrix and much more. The lengthy conversation will be broken into a series of recurring posts over the next few months.

We’re starting with a bit of a prologue: Darrow, one of comics’ most accomplished artists — he’s got three Eisners to his name — was a protege of the great Jean Giraud (aka Moebius) and the influence is palpable.

As G.D. put it: “Darrow is an adherent of ligne claire, having studied under the incomparable Moebius, whose influence is readily apparent. But where Moebius exulted in flighty openness and existential crises, Darrow descends into the muck and the grime, laughing at humanity’s absurdities at every turn.”

G.D. Kennedy: You went to France to work with Jean Giraud, aka Moebius, right?

Geof Darrow: Yeah. I wanted to move to another country because I grew up in Iowa and I thought, “How can I get something other than the American view of how the world is?” And so I went over there, and [Jean Giraud] had already mentioned that we were going to do a comic strip together. He was writing, I was going to draw it. And it is classic — I get over there and he decides to move to Tahiti, so it’s kind of like, there were two weeks when we were together, and then he was gone and I was there. He would come back from time to time, but when I was first over there, he was in Tahiti. 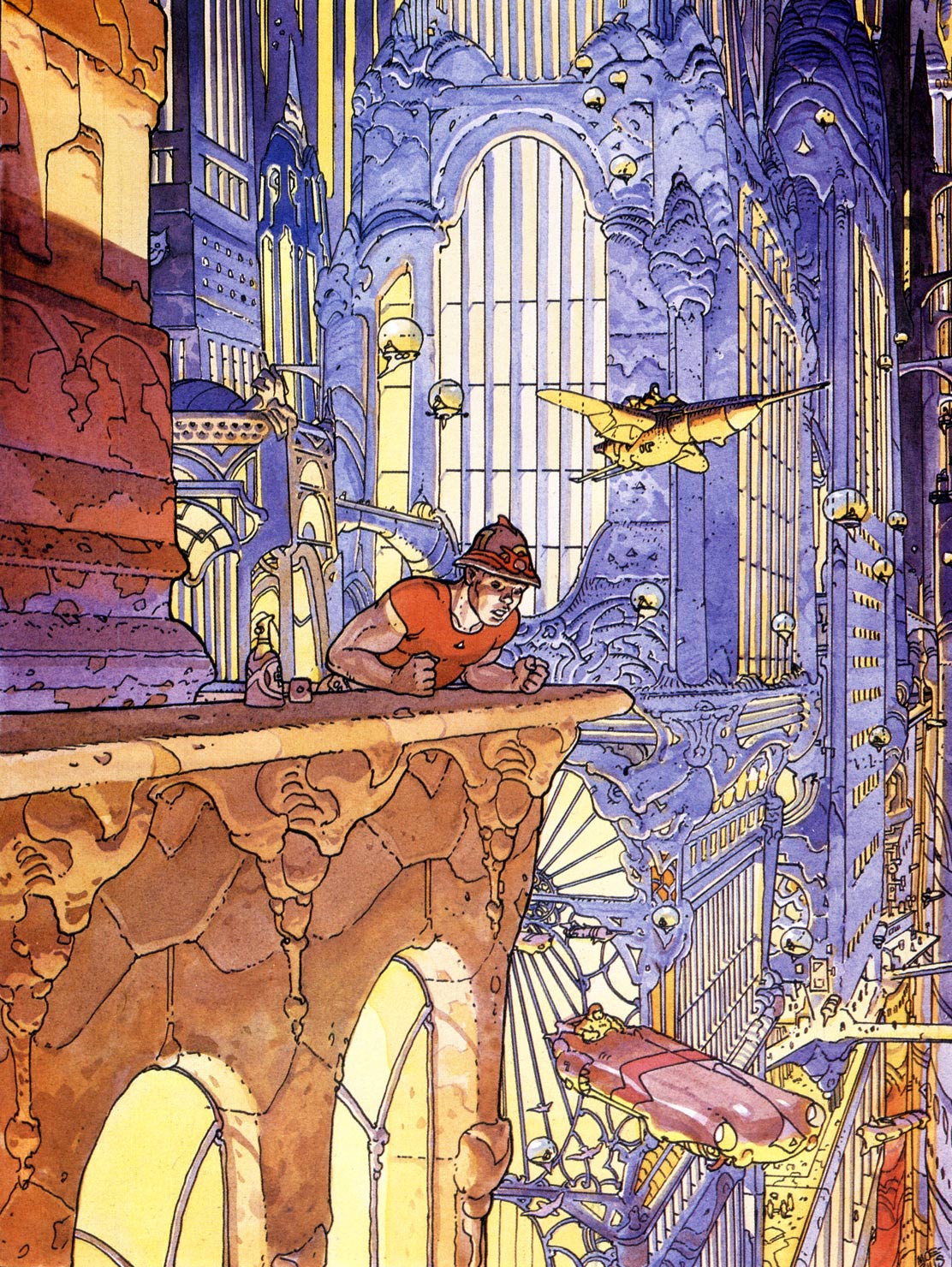 The rest of the images are by Moebius.

He was a guy that I admired. I was, and still am, a big Jack Kirby fan, and Vaughn Bode and Jack Davis and Richard Corben, and then I discovered Moebius — or not Moebius so much, but Jean Giraud, before he was Moebius. In France, everybody knew who Jean Giraud was — he did this really famous Western called Lt. Blueberry, and that was the first of his books that I ever bought, some French book in 1972. Bud Plant used to import French comics, and he was the only guy doing it.

I bought one on a whim because I’d seen a couple drawings from it that I thought were fantastic in a book … by Maurice Horn, which was a really great book that introduced me to comic artists from all over the world, from America to Japan. And he had a couple of panels in there from Blueberry, and I ordered that book and another book by Jean-Claude Mézières, called Valerian (which they’re making a movie out of), and a guy named Hermann who did a thing called Bernard Prince. They became my three guys.

G.D.: That style comes through in the open spaces and the whimsy that Jean Giraud always put into his work.

Geof: Yeah. Except he was always very poetic. I’m about as poetic as a sledgehammer. He was always so light and beautiful. He was a really sweet, sweet man. God, he just loved to draw. He drew right up until the day he died. I saw the last drawing he ever did. It was really touching. 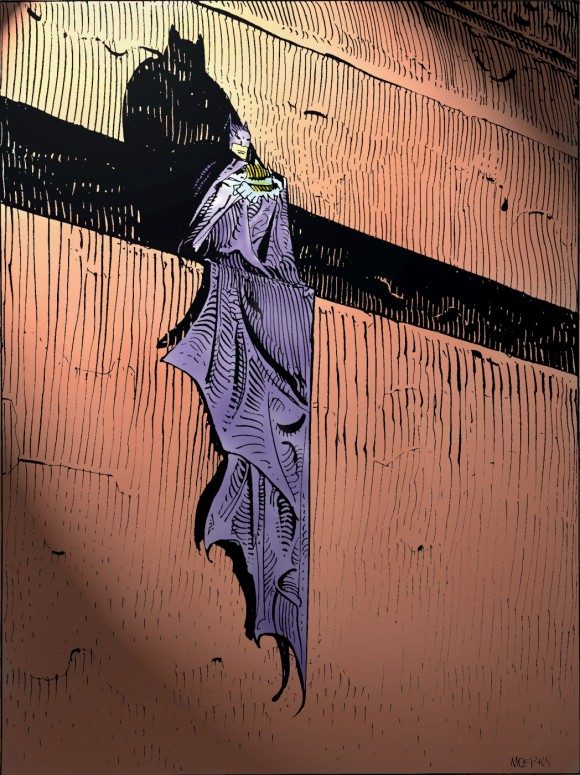 G.D.: I think your word “light” is a great description of his work.

Geof: He could do everything. He could do the style that I work in, which comes from Herge, which is ligne claire, or “line clear,” but he could also do all blacks and the spotting blacks. I remember one guy would say, “He’s a monster,” because he could do anything. It just flowed out of him. He never stopped. His sense of composition and his storytelling. Here’s a guy that if he wanted to, he would have made a great film director. They never asked him; it’s funny. 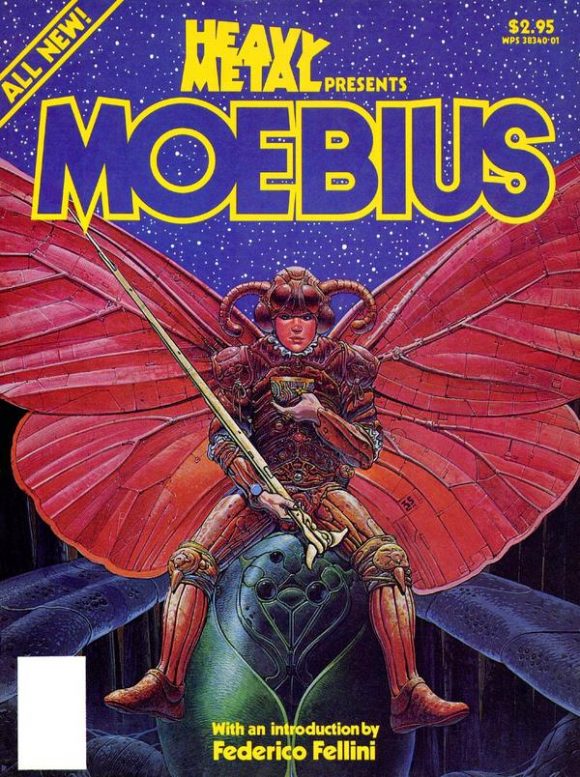 Later in the conversation, Darrow noted:

Geof: When I met Moebius, I was really concerned, what if he’s an asshole? If he’s self-centered? You read about these guys in this business that can’t wipe their ass. But he was always so nice and self-deprecating. He was aware of how good he was, but there would be times when he would be talking to me and he would be depressed because he didn’t think he was any good. I would be like, “Wow. Wow.” 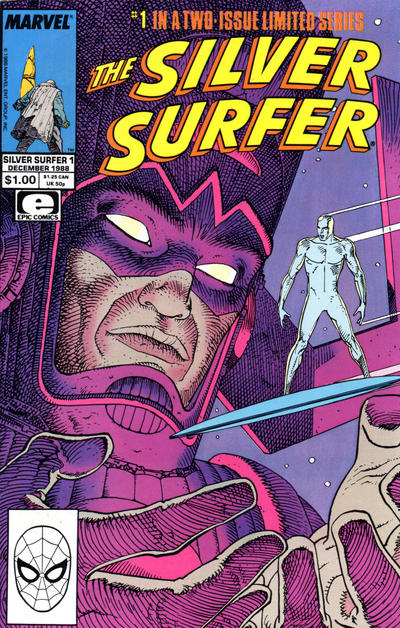 G.D.: It is reassuring to know that the best of the best still can feel that way.

Geof: Yeah. Yeah. Just to watch him draw, to watch that stuff flow out of his pen… And he liked it. He liked it. I know guys who complain about doing this stuff, but he just really loved doing it. He loved comics, he liked to read them. 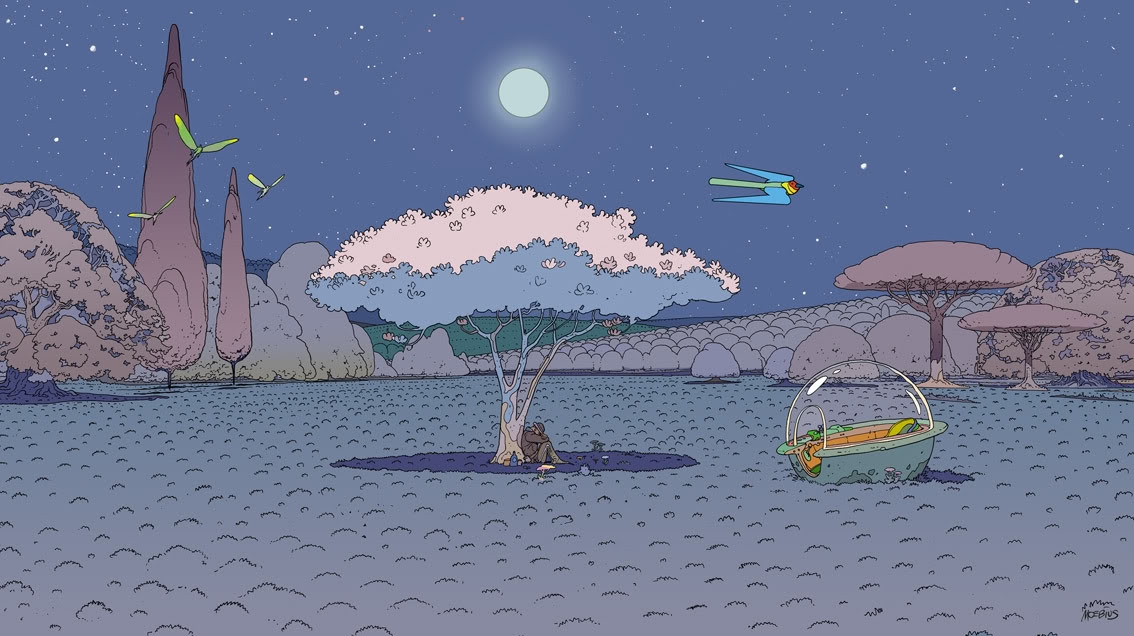