When Batman gave way to an obscure superhero.

The third and final hardcover volume of the Silver Age Batman Dailies and Sundays from IDW and the Library of American Comics is out — and tucked inside is one of the strangest chapters in the Caped Crusader’s history: The saga of GALEXO!

In a nutshell, a battle between DC and The Ledger Syndicate resulted in Ledger producing unauthorized strips in early 1972. The uncredited Syndicate creative team soon introduced a new hero, Galexo. The US run ended in April — but continued in The Straits Times, an English-language newspaper in Singapore. It ran as a Sunday strip slapped together from what were designed to be dailies.

Batman and Robin, however, were basically supporting characters in their own strip — and out-of-left-field crimebuster Galexo eventually took over entirely. Those Singapore Bat-strips are included in Volume 3, courtesy of Steven Thompson, comics historian and man about the internet. 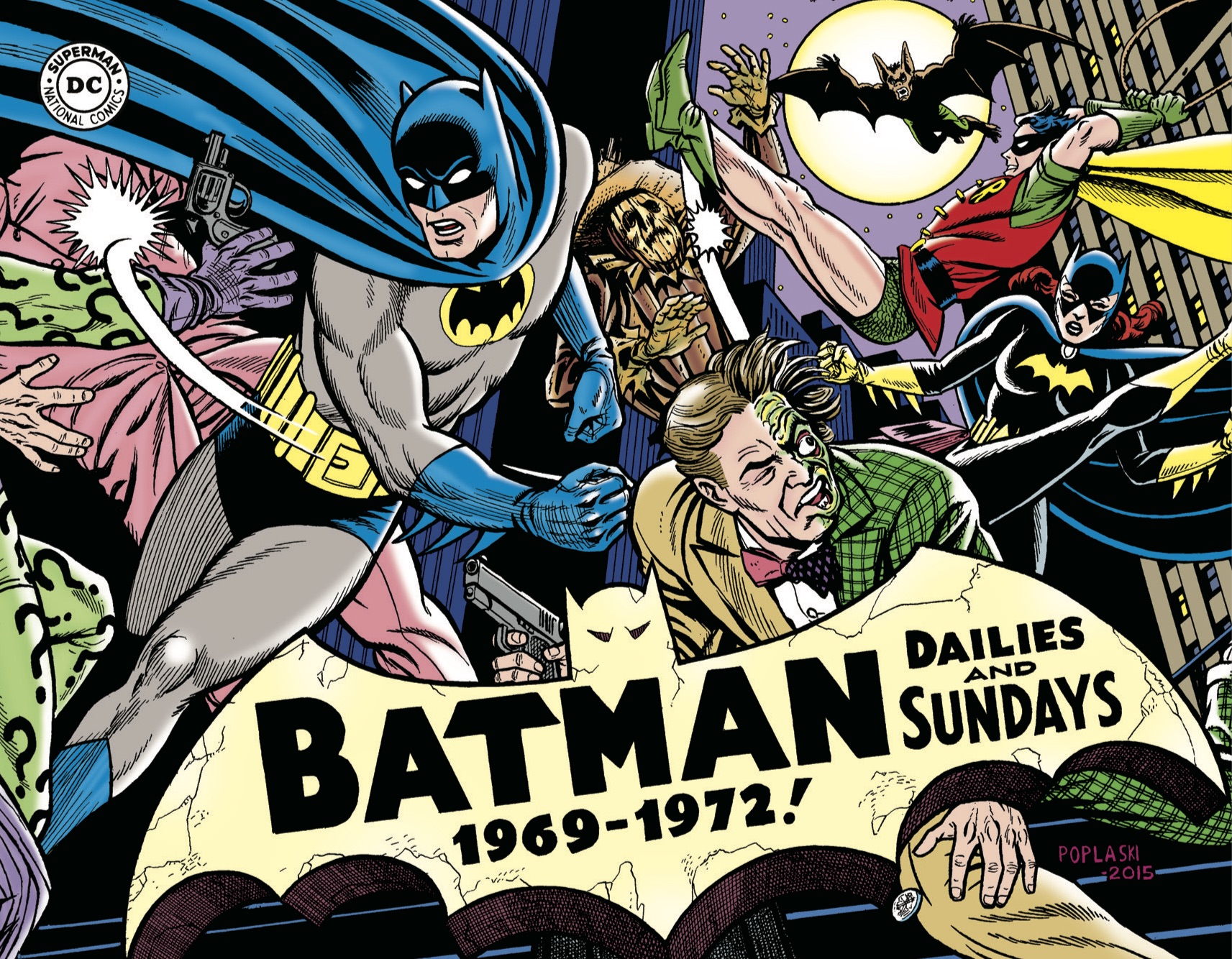 Though much about Galexo is still a mystery all these decades later, Steven provides some notes that explain some of this the bizarre bit of Bat-history — and he includes a selection of the original strips from his own collection.

For a broader look at Volume 3, click here. — Dan

OK, here’s some Galexo goofiness. No idea on the artist. Traditional thinking says it’s Fran Matera but Matera was a much better artist than this. The error comes from the fact that Matera was the credited artist on the solo Galexo strip that followed.

Toward the end of the Batman run, the art style improves and the name Materazzo appears. This was not Fran Matera’s real name as near as I can tell. I’ve spoken with his kids. They remember him drawing Galexo but never Batman. He sold off all his art before he died a couple years ago. I have never been able to find as much as a single Galexo strip on the collector’s market, though. There is an Italian artist named Gianni Materazzo but he wasn’t working in comics until a decade and a half later. 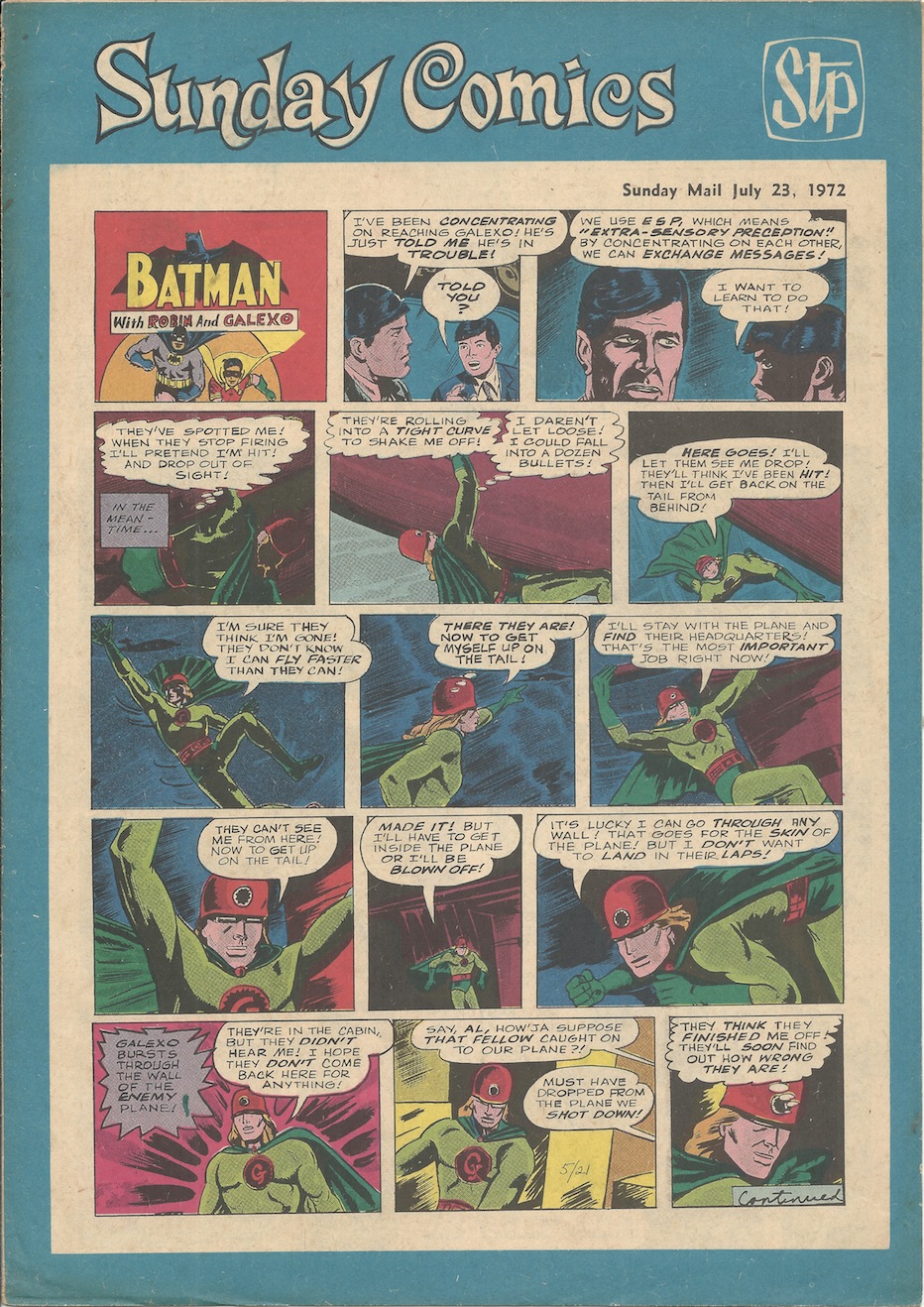 It has long been believed that once Galexo showed up, Batman and Robin appeared only as Bruce and Dick. This is now proven not true. 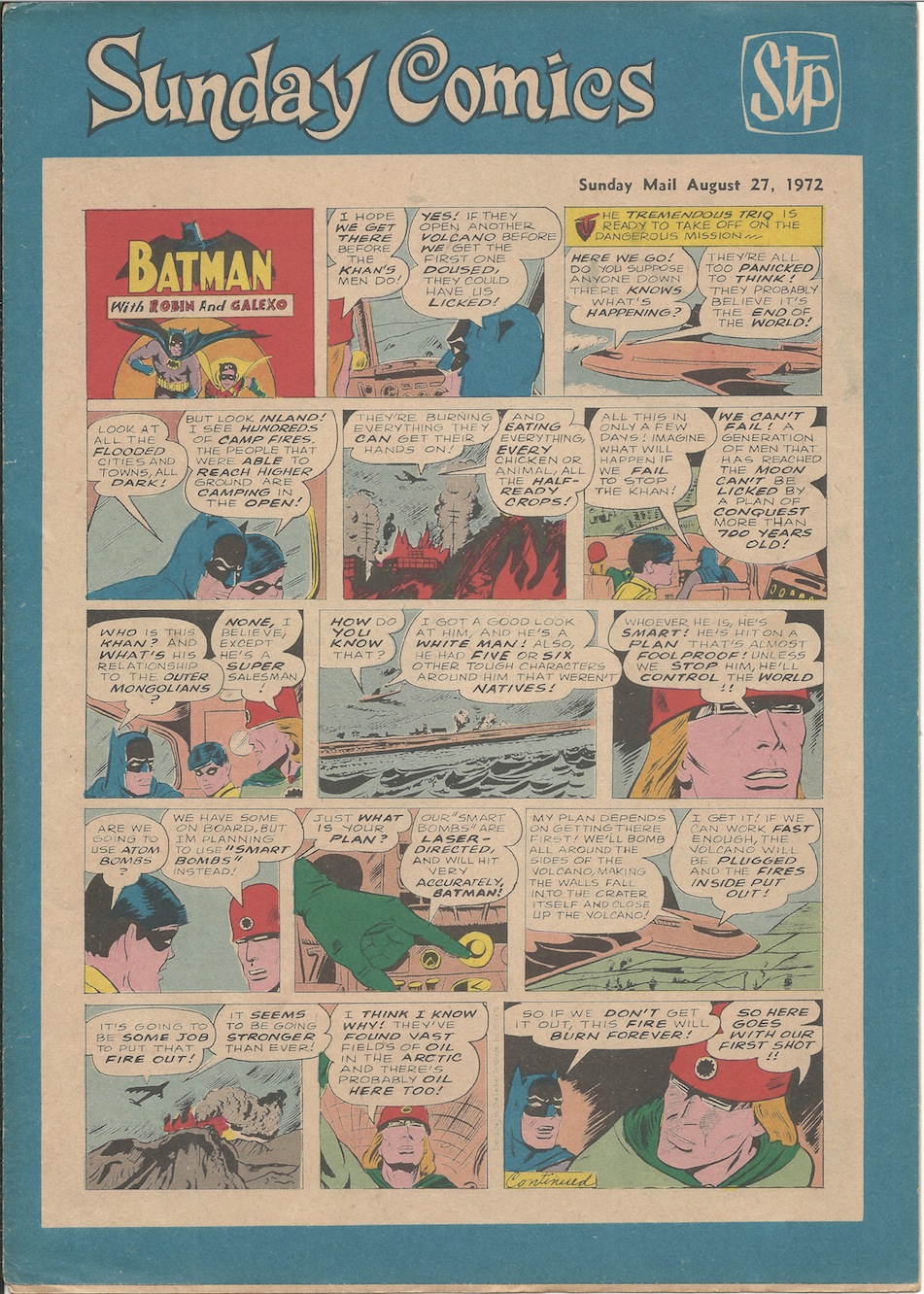 The color was added in Singapore so it does not necessarily reflect what Galexo’s colors were meant to be. 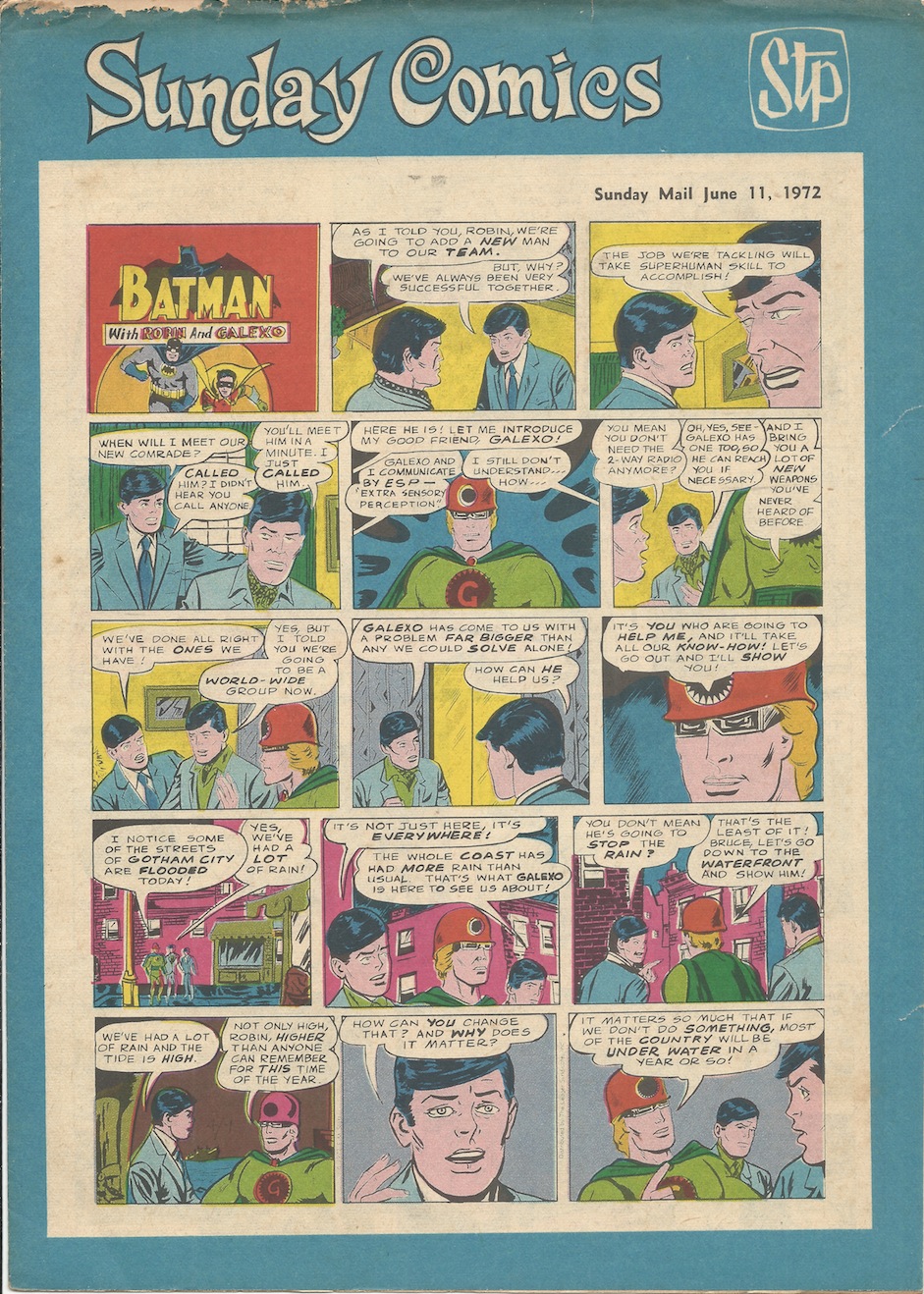 Some more strips for your entertainment: 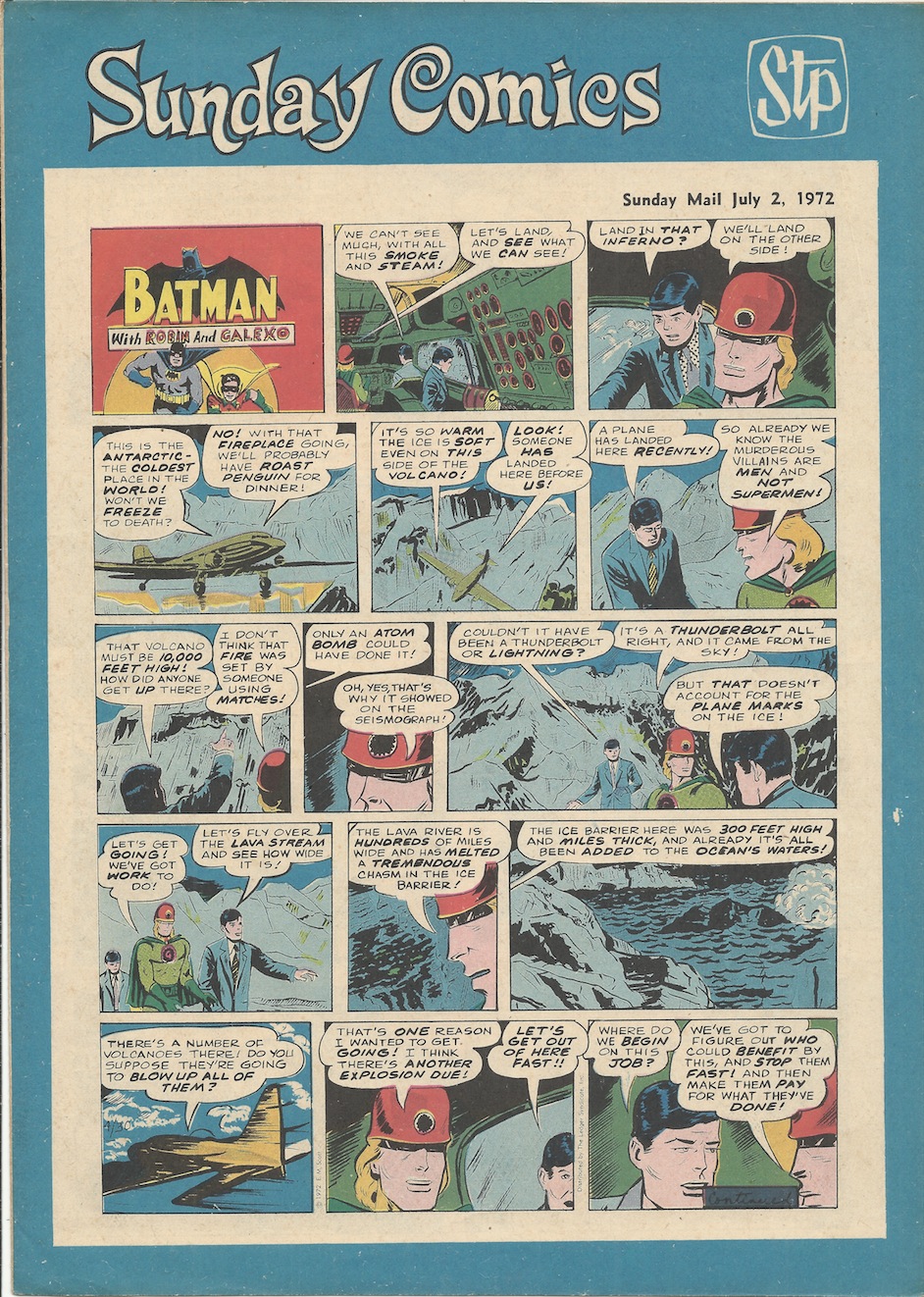 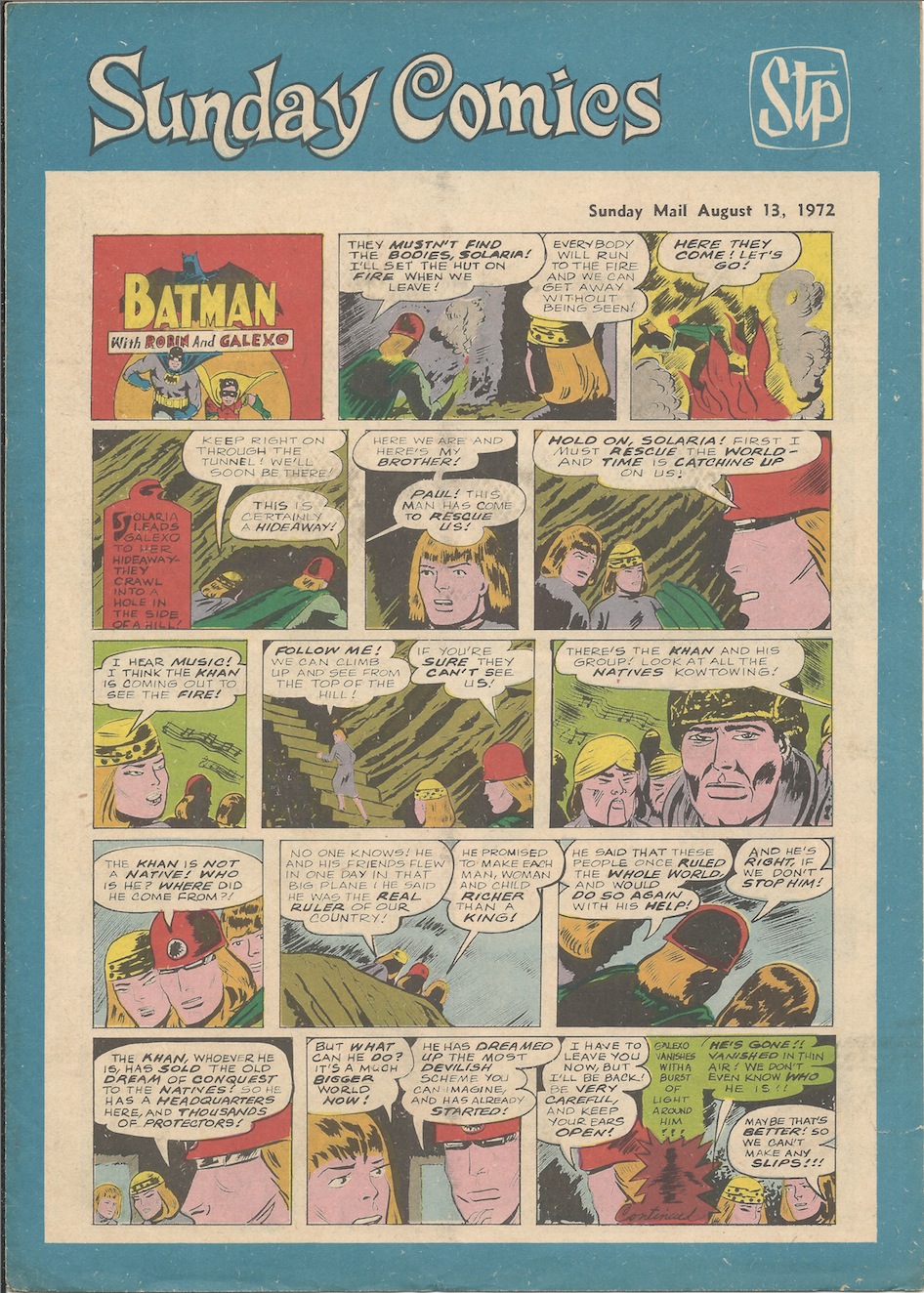 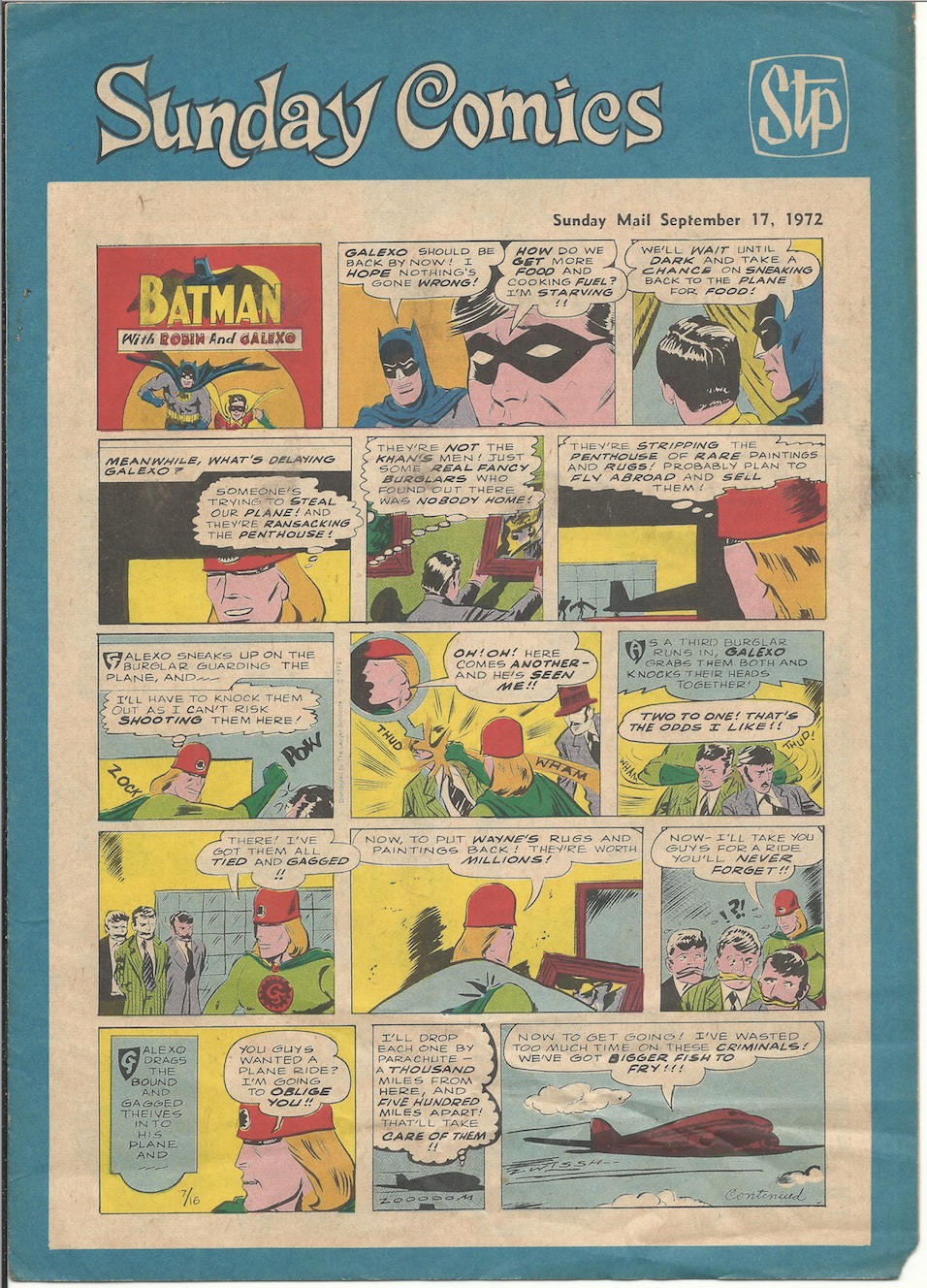 Again, for a broader look at Volume 3, click here.