One of the more notable never-was releases is out from Figures Toy Company. PIX APLENTY! 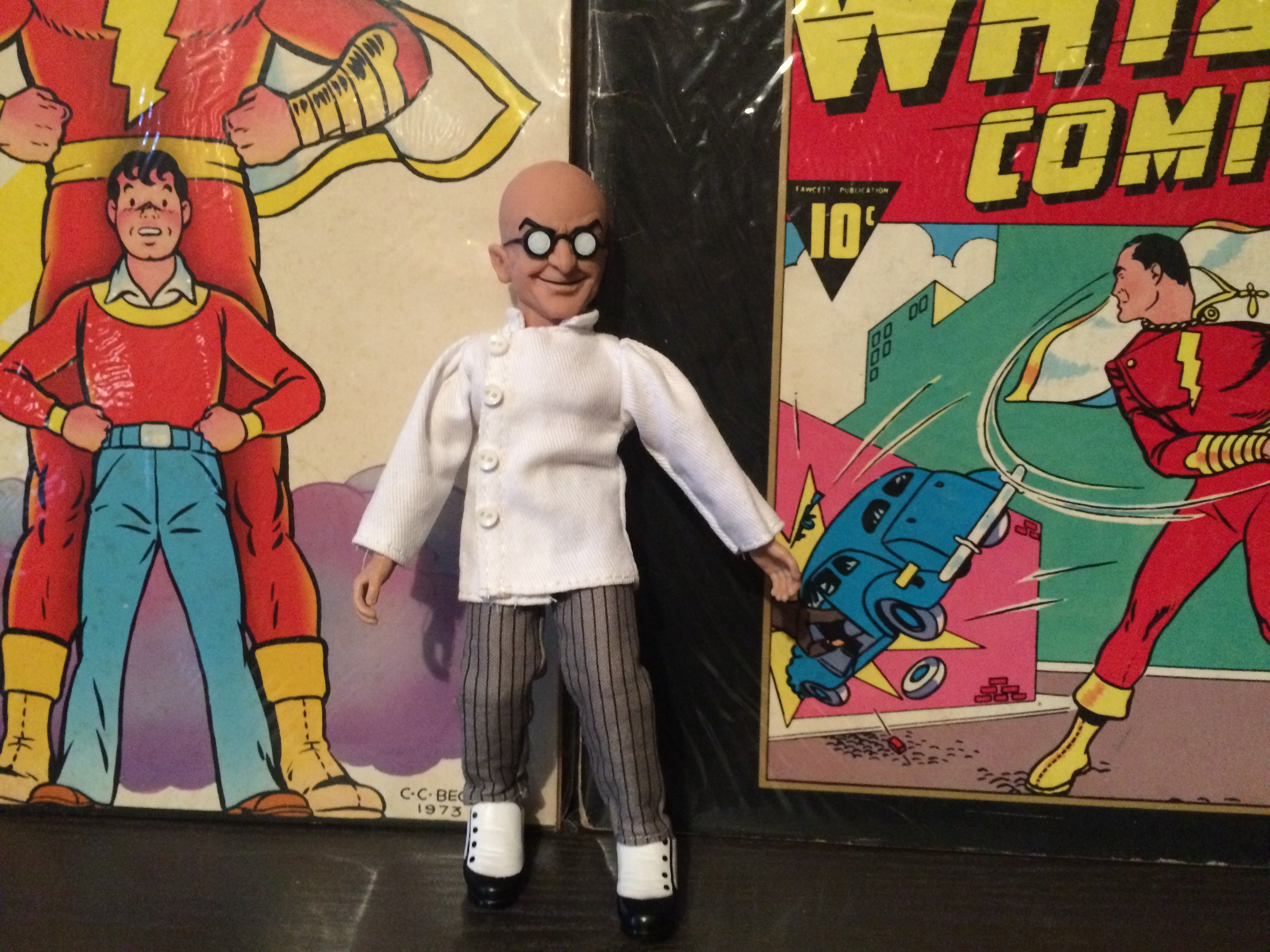 Great as Black Adam and Mr. Mind are, Dr. Sivana will always be Captain Marvel‘s greatest adversary, as far as I’m concerned.

Maybe it’s because he always seemed like a Lex Luthor analogue. Maybe it’s that he was ingrained in my head because Cap was my dad’s favorite, and as a kid he would mention him to me. Maybe he just is. Clearly Grant Morrison agrees, having featured the mad scientist so prominently in the recent Multiversity epic. 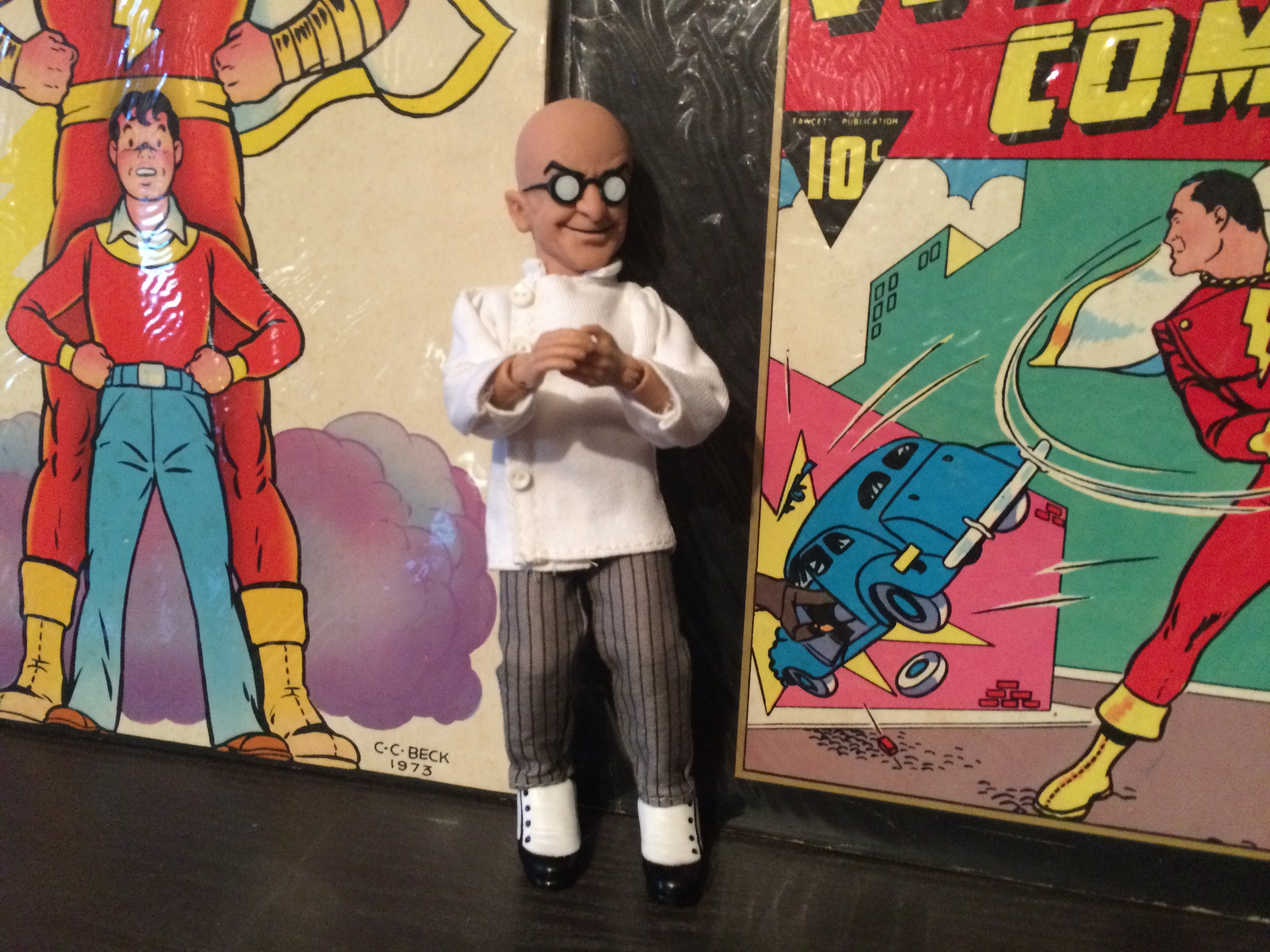 Whatever the reason, Figures Toy Company‘s latest release feels like one of those significant Mego-history course corrections. Every hero needs his villain, and so Mego Captain Marvel needs Mego Dr. Sivana. 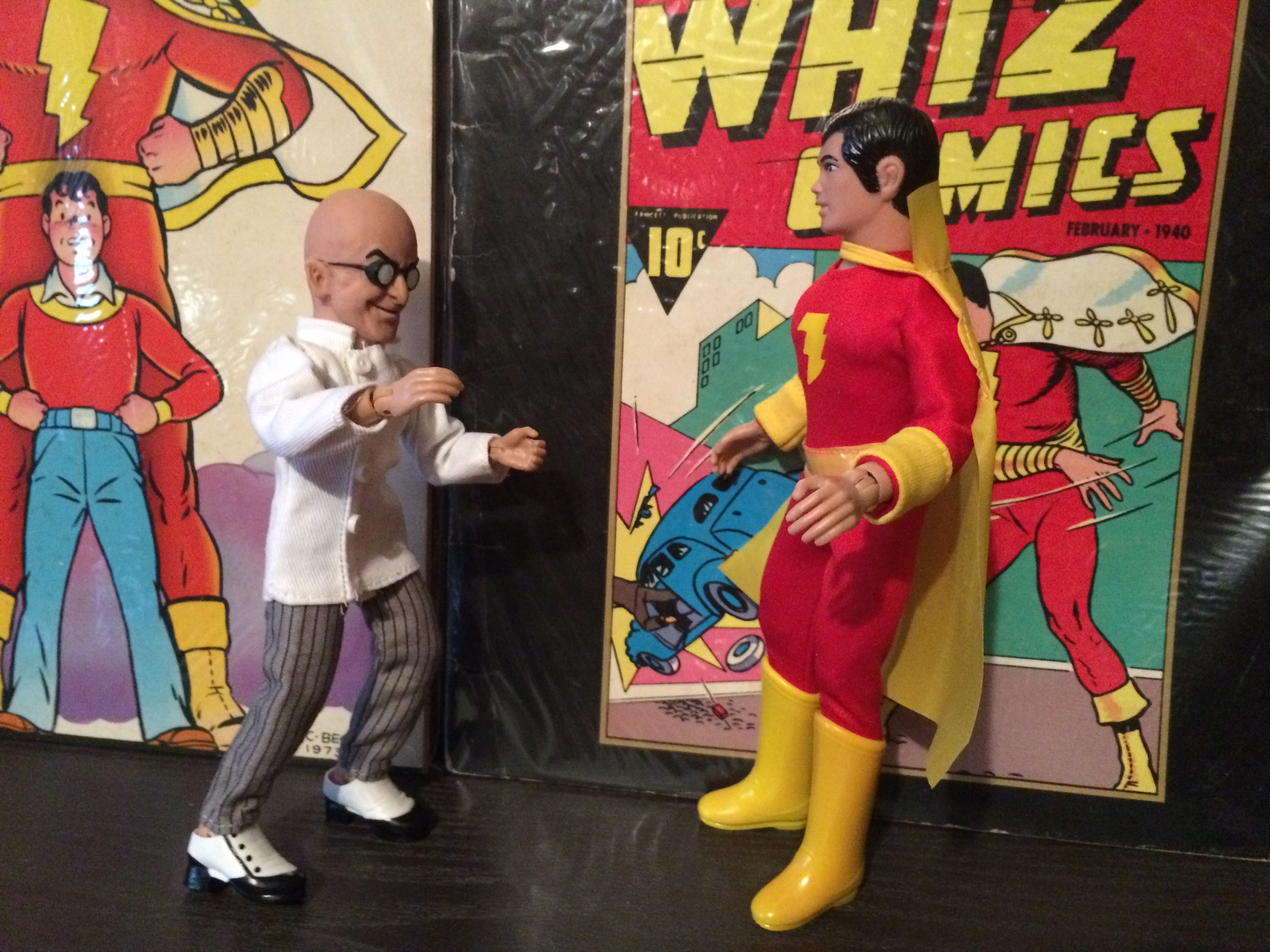 And FTC gets it right, giving us a suitably smaller-sized supervillain in his gray, pinstriped slacks and white lab coat. If FTC gave us a full, 8-inch Sivana, nobody would complain. But it’s that attention to detail that’s become a hallmark of the toymaker.

I love the face sculpt, which is appropriately venal. I tend to prefer figures with molded-on glasses to those whose glasses are separate accessories. In the case of Thaddeus Bodog Sivana, it’s an easy choice, given that he was frequently drawn so you couldn’t see his pupils. 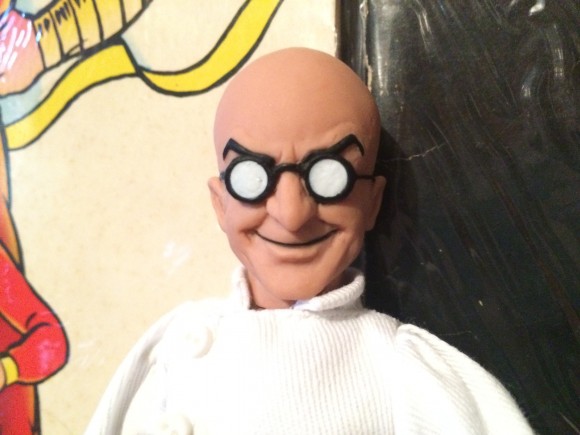 The packaging is sleek and colorful. Sivana is part of the first two waves of FTC‘s Kresge line, mimicking the look of the blister packs that were geared toward that now-defunct retailer. All the FTC Kresges are numbered on the front. 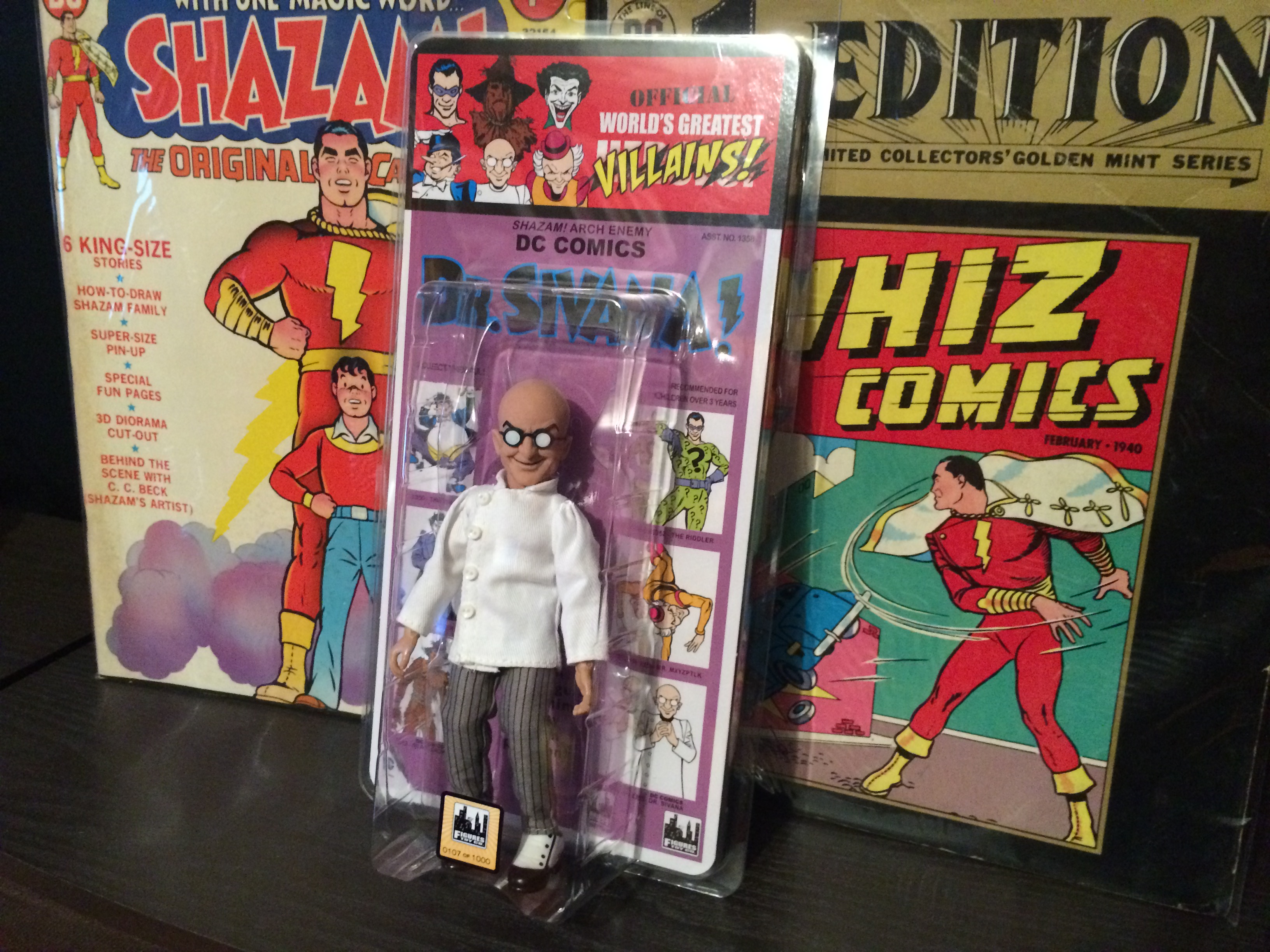 Kresge cards are popular among Mego collectors who were exposed to them in their youth but I don’t recall seeing them until adulthood, so they don’t have that same pull for me. Nevertheless they are really attractive — and for whatever reason, the color combo for Sivana‘s card seems right. (And, hey, check out the original Mego/Infantino Joker art in the headshots!) 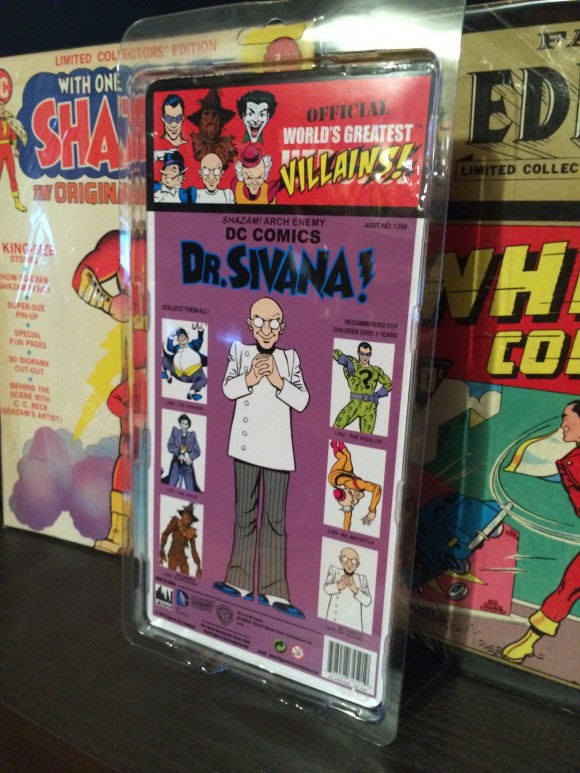 These two lines feature previously released FTC figures, except this is the first time you can get the likes of Cap (Shazam!), Aquaman and Green Arrow in their classic-color packages and without the fist-fighting feature. They run about $27 each, and you can get them from FTC or other online retailers.

I only have one question: What kind of name is Bodog? 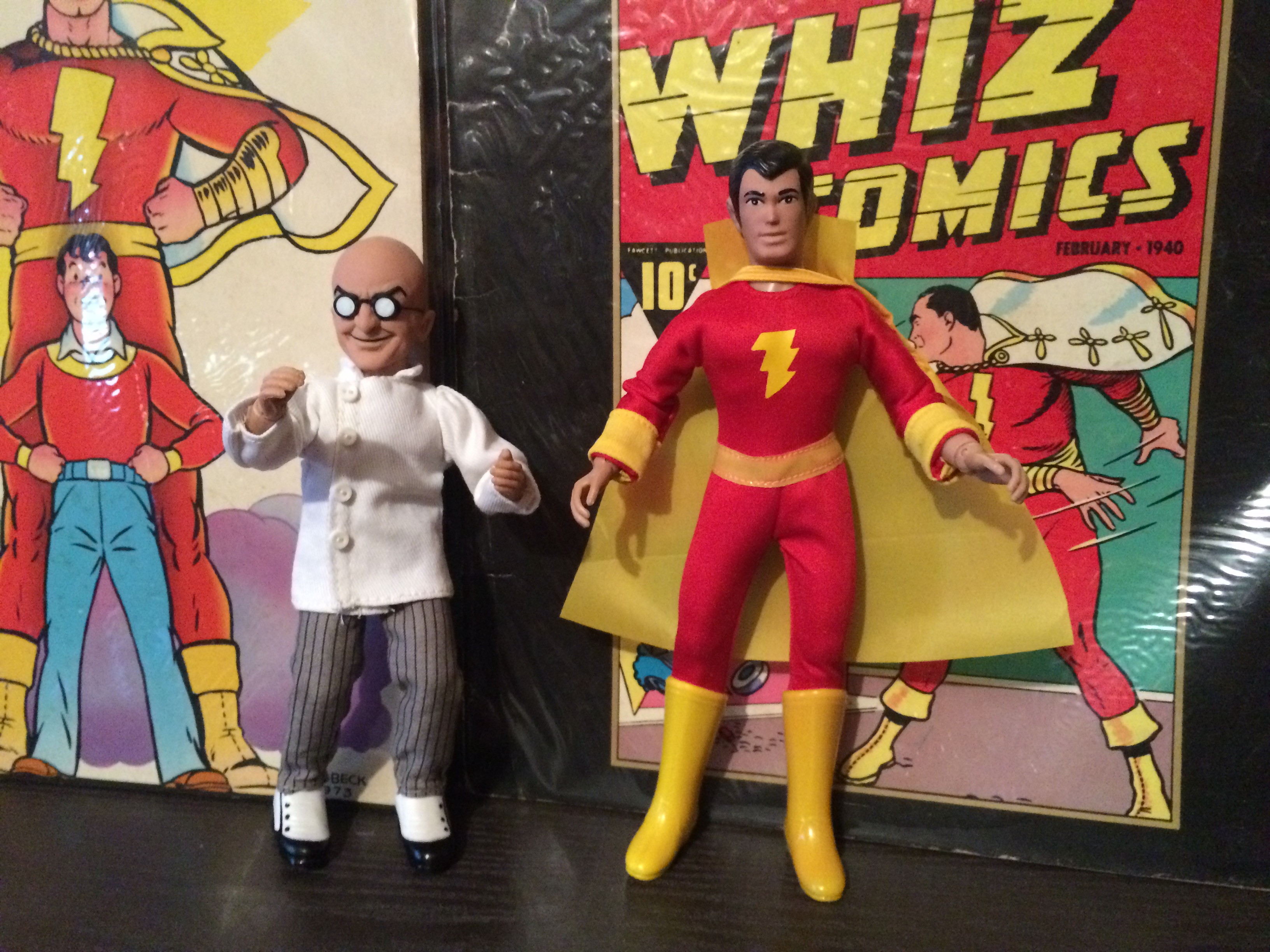 Together again for the first time!