Greg Capullo’s Batman and Talon make the leap from page to plastic, in this special edition of GOTHAM TRIBUNE. 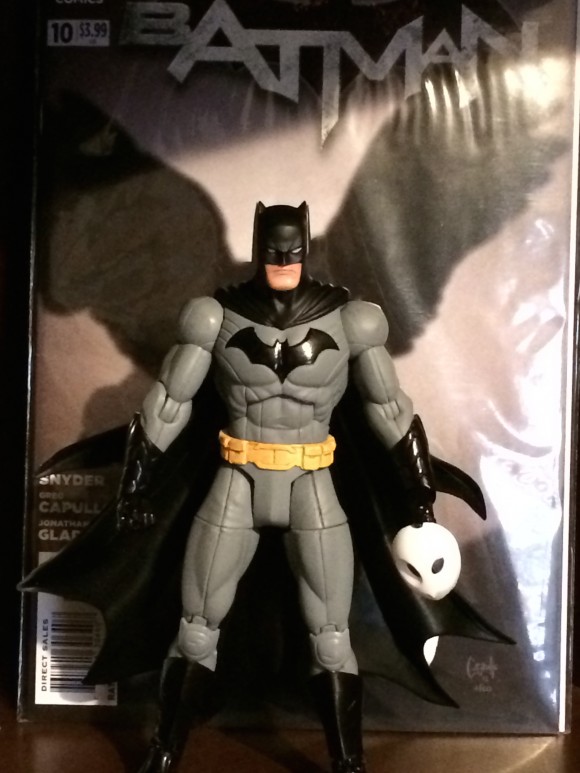 Since the New 52, DC Collectibles’ primary, 6-to-7-inch comic-book action figure line has generally centered on a broad range of characters with a generic sensibility.

The figures, such as those in the Justice League or the Crime Syndicate have been based on the art or designs of, say Jim Lee or David Finch (or even in the case of the Joker, Greg Capullo), but they’ve been cultivated and marketed in a very broad way.

It’s been more about This Is the Modern Superman Action Figure. And that makes all the sense in the world. DC has worked feverishly over the last three years to redefine who their characters are and what they look like in general terms. The auteur theory has taken a back seat to the company line. (Statues, on the other hand, have continued to celebrate a broad range of artistic interpretations.)

Now, DC Collectibles, which by year’s end will have produced figures for just about every major character, is taking a page from the erstwhile DC Direct’s playbook and going back to producing action figures with a specific artist’s eye in mind. Hence, the DC Comics Designer Series. 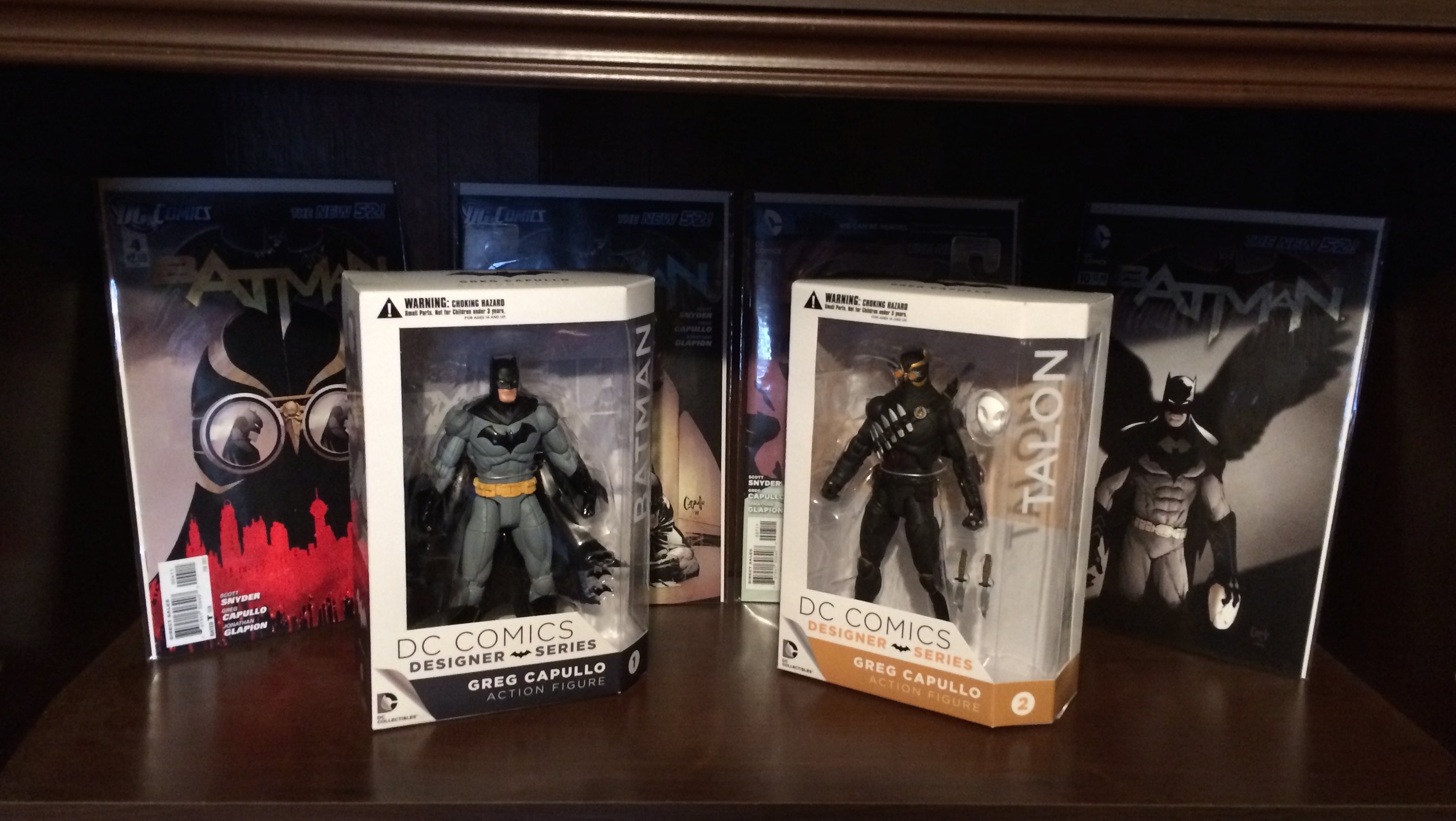 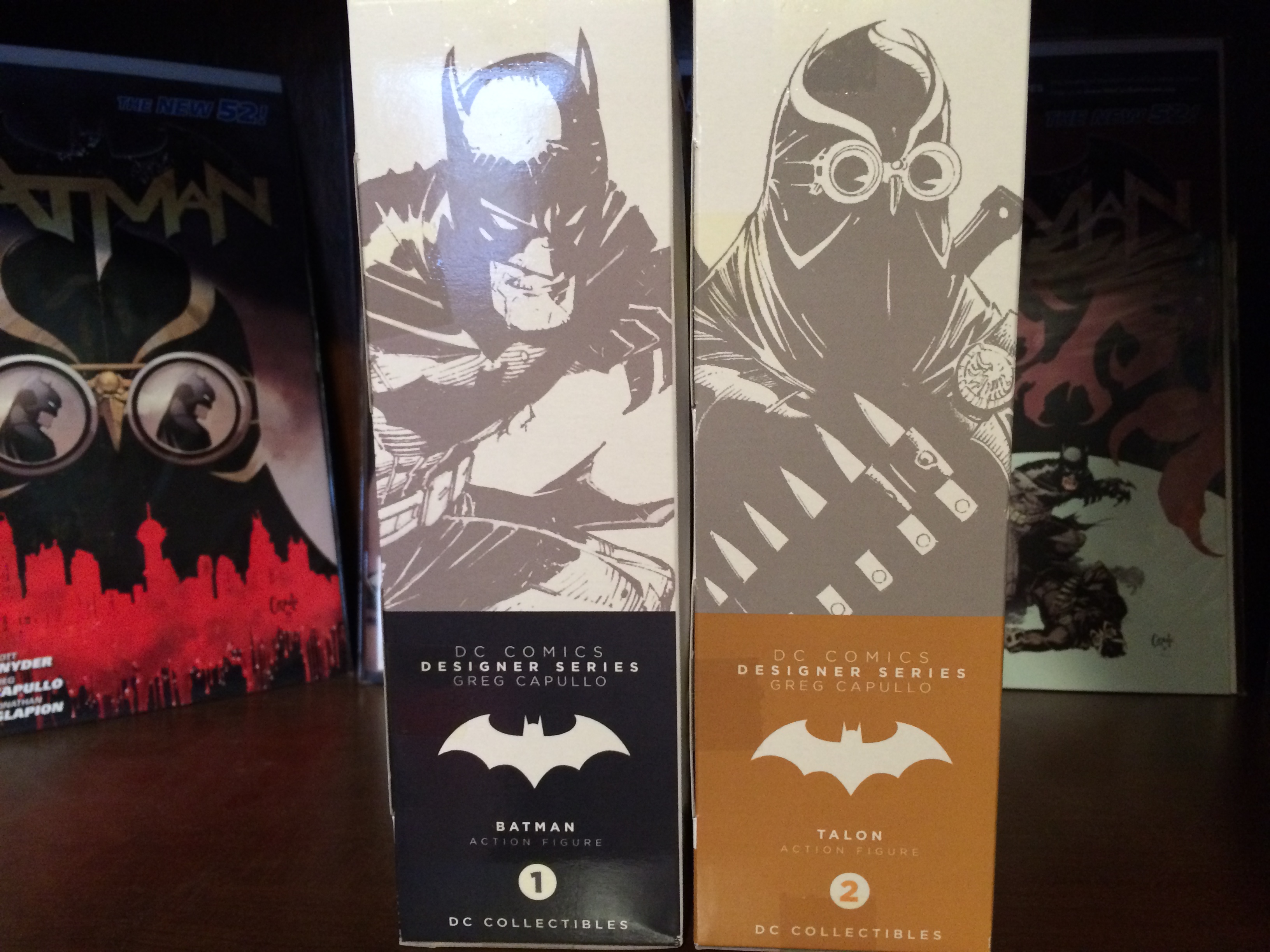 And where better to start than with Capullo, who’s been the biggest art star at DC since the companywide relaunch in 2011.

Some artists’ styles translate better to three-dimensional, poseable plastic than others. Capullo is a master in both forms.

The Batman figure is a perfect rendering of Capullo’s Dark Knight. There’s the chin, the cowl that seems to be both featureless and stirring at the same time, and the combination of sharp lines and rounded edges of Batman’s anatomy. The paint job is a smart combo of matte and gloss, capturing the textures in the artist’s printed style. He poses exceptionally well, and looks very much like a Capullo drawing from all angles. Included are three small Batarangs. 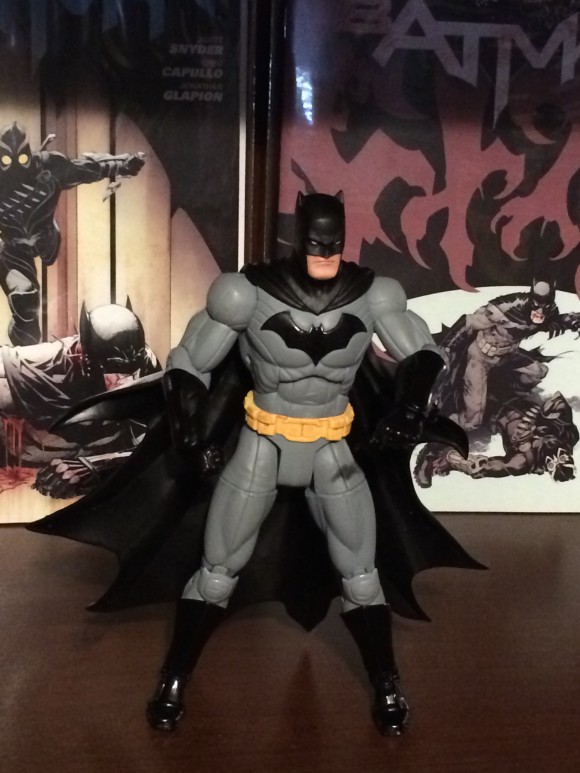 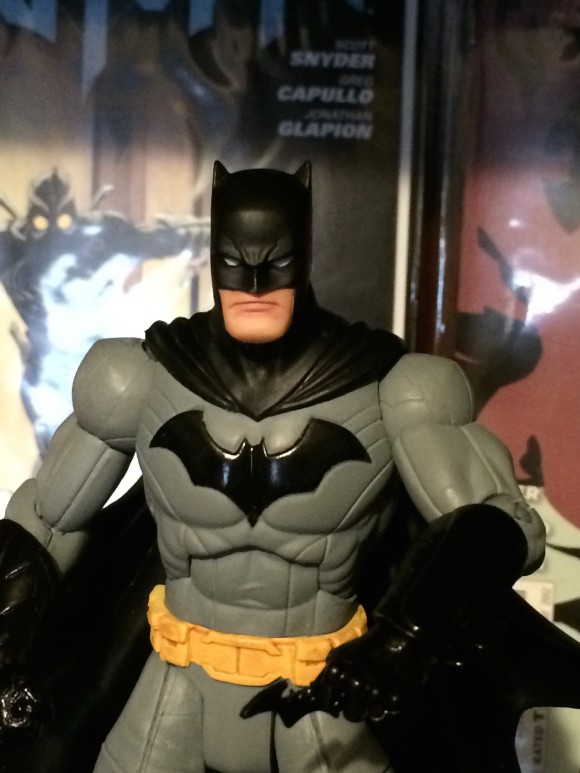 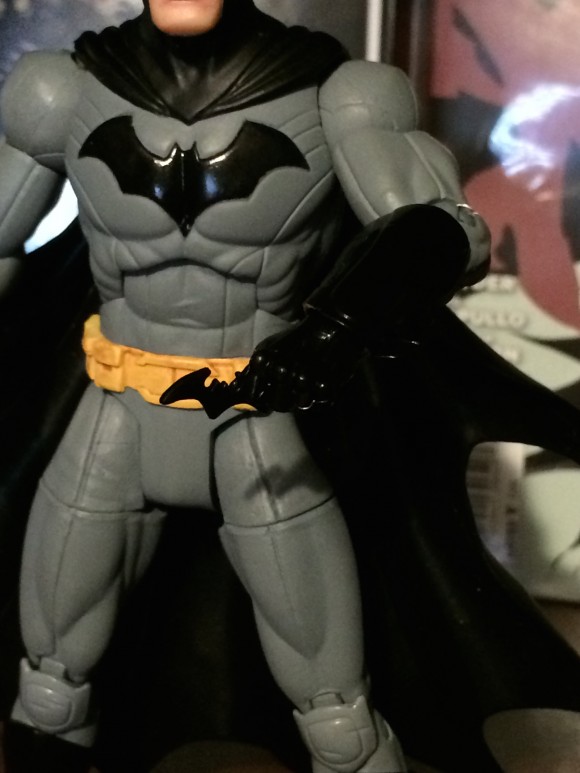 The first-ever Talon figure — straight out of Capullo and writer Scott Snyder’s Court of Owls saga — is nearly as good. On a computer screen it looks fine. But up close, it’s a particularly striking figure, from golden (brass-colored?) beak to bladed bandolier. Plus, it comes with a scale version of a Court of Owls mask, which is a dynamite touch, removable swords and two knives. (Careful getting those knives out of the plastic packaging, though: One of mine snapped in two right away and I’m a pretty careful guy.) 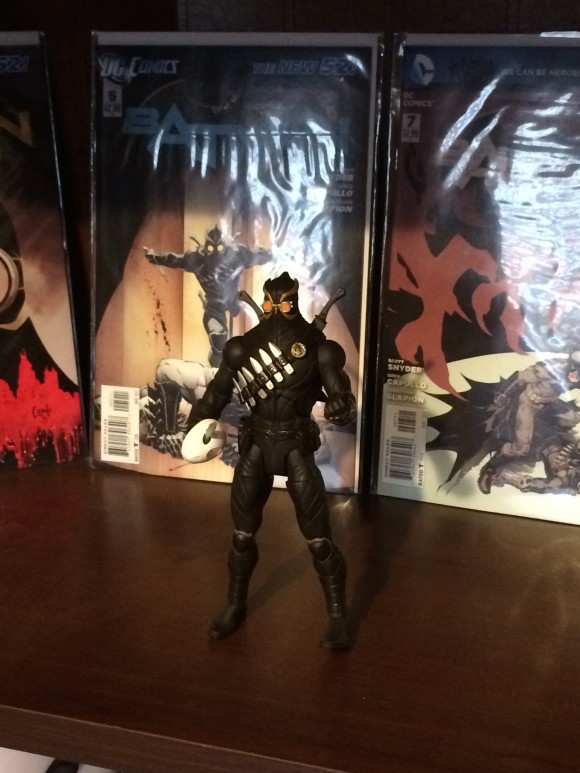 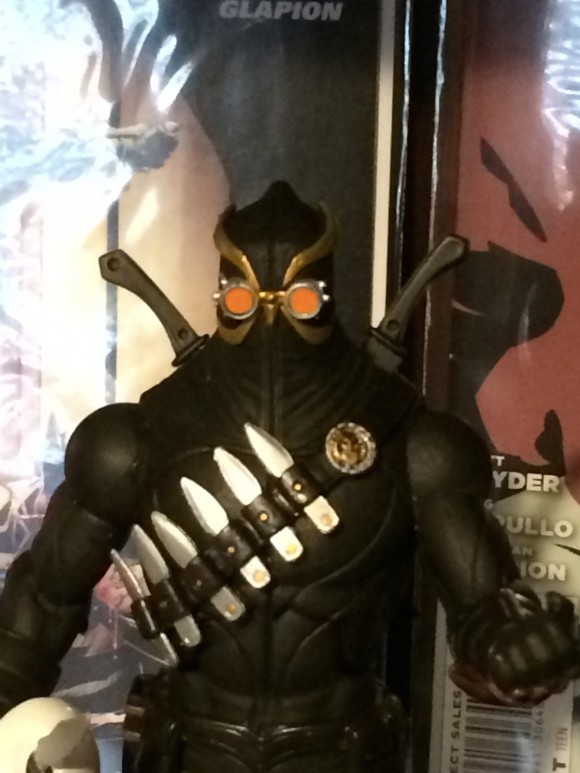 DC is also trotting out its new package style, which we’ve already seen on the “Arrow” Oliver Queen/Deathstroke 2-pack. The box design is even sharper on the singles. The characters are displayed cleanly with slick labeling on the plastic. Plus Capullo’s connection to the line is very much front and center. 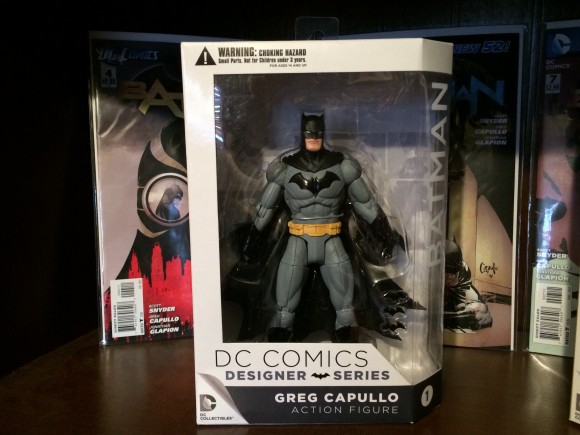 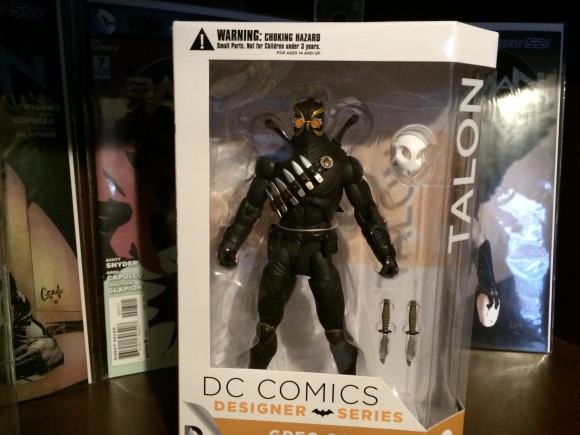 A note about articulation: DC’s begun producing figures with more articulation than the original New 52 line. I didn’t think it worked quite well enough with the recent Crime Syndicate release. Those characters seem awkward and knock-kneed. Whether it’s a design improvement or whether the added articulation is better suited to Capullo’s style, these figures are a marked improvement: Batman can even look up at a pretty high angle, for example.

These will be in stores within a couple weeks. I can’t wait to see the second half of this first wave in May — the first comic-book Nightwing and Riddler figures produced by DC Collectibles since the New 52. Because Batman and Talon are just about as good as they get. 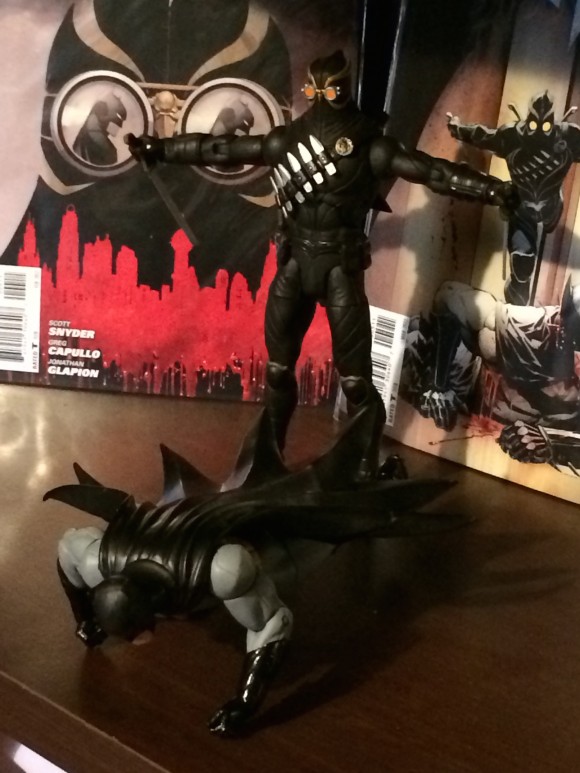