Should I trot out “Holy Rodin!” again? Nah…

I’m gonna tell you something: I really, really dig talking to the people who are as into Batman ’66 as I am. But there’s an added dimension (pun intended) when those people also make the Batman ’66 swag that’s so darn groovy.

Barry Bradfield and Jean St. Jean are two of those people. These guys have been at the forefront of Diamond Select Toys’ run of busts, statues and banks since the start and I’ve communicated with them many times already about how they’ve created various items in the line. (Click here.)

Now, it’s time for Robin, the Boy Statue. We gave you the EXCLUSIVE FIRST LOOK the other day (click here) and now designer Barry and sculptor Jean are here to give you the straight dope on how they created him — including some fantastic concept and in-progress pix. (Robin’s up for pre-order soon and will be available later this year. He’ll run you about $150.) 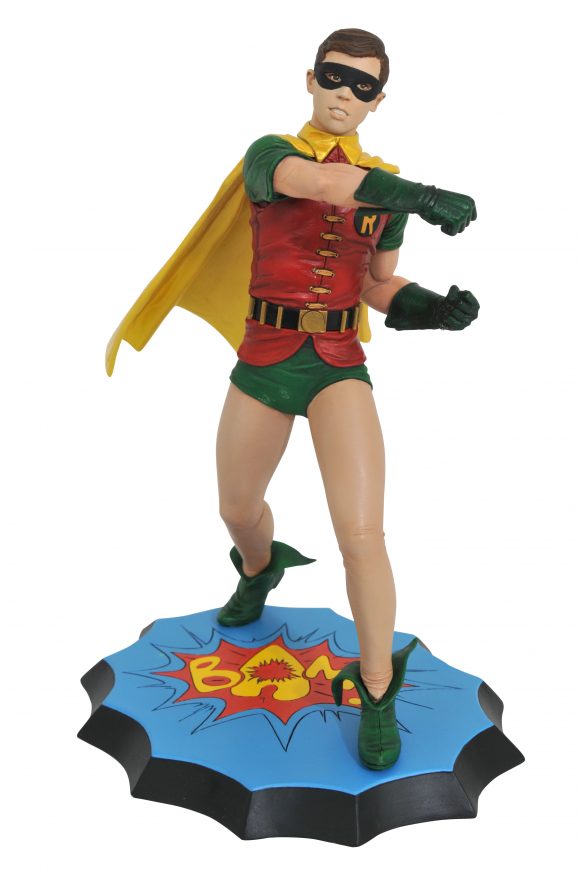 Dan Greenfield: The Robin statue is obviously a tandem piece to the Batman statue. Who came up with the idea to set them up this way?

Jean St. Jean: This was Barry’s concept, and it really captures the essence of the Dynamic Duo, especially the Silver Age feel of the show. The fights were so choreographed with a fun feel as opposed to any viciousness, and the tandem teamwork of Batman and Robin was fun to watch. 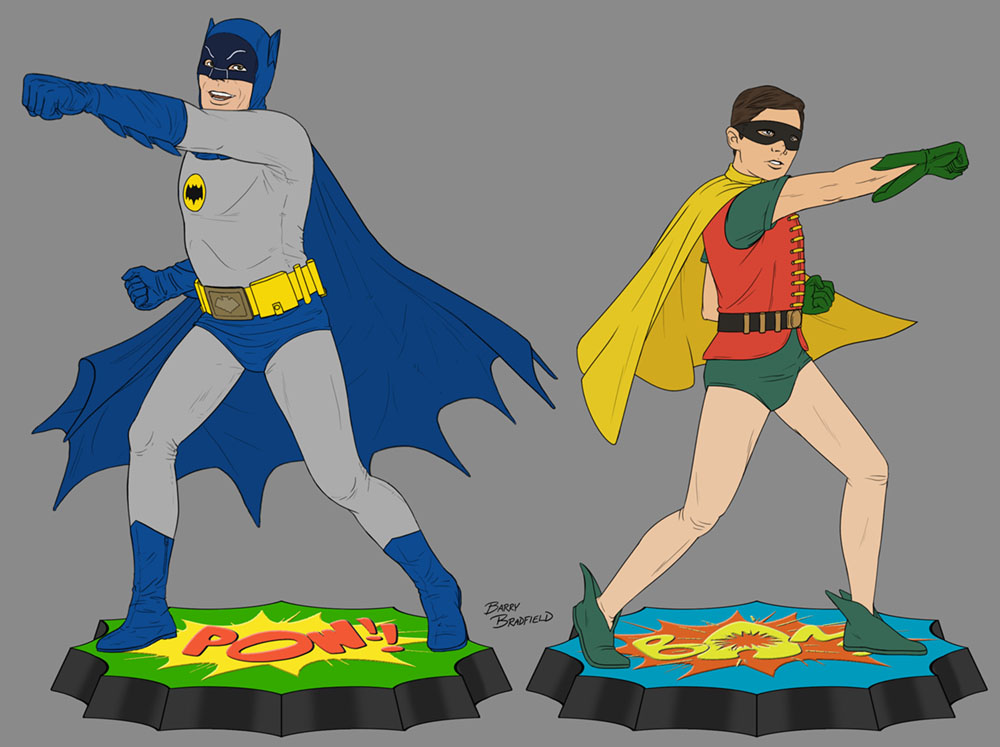 Barry Bradfield: One of the original bust-design ideas I had was to have Batman and Robin punching in opposite directions. We went in favor of the busts that are out today instead because without a lower body, the punch pose just didn’t work as well as it should have. When the opportunity to design the Batman statue came up, I went back to that old idea with the hopes that we would be able to mirror the pose in Robin at a later date. I feel that these work a lot better as statues because you get the added sound effect as the base. I don’t think the sound effect would work as well as the base of a bust. 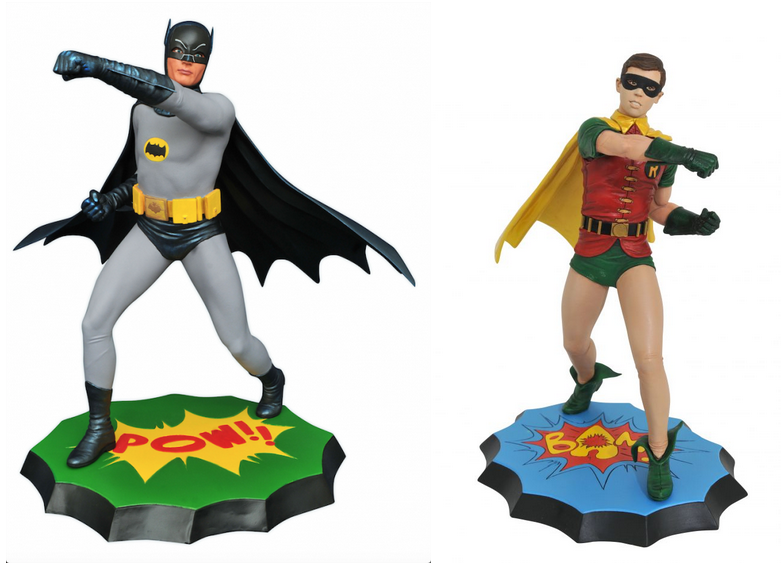 Dan: Robin has a relatively ornate costume, even more so than Batman. What were the particular challenges in getting the design and the sculpt just so?

Barry: I’ve become familiar with the finer details of the Robin costume after designing the bust and the bank, so this time around it was not as difficult. It’s the little things that really make this particular Robin costume, like the eyelets for his stitching or the capsules on his belt.

Jean: This is my third swing at the Boy Wonder, and I’ve done quite a bit of research online tracking down behind-the-scenes photos and pics of the actual costumes on display to discern the finer points of their fabrication. I like to represent everything as realistically as possible, down to all the grommets and stitch lines, so continuously updating my reference on the outfits is critical to how I work. 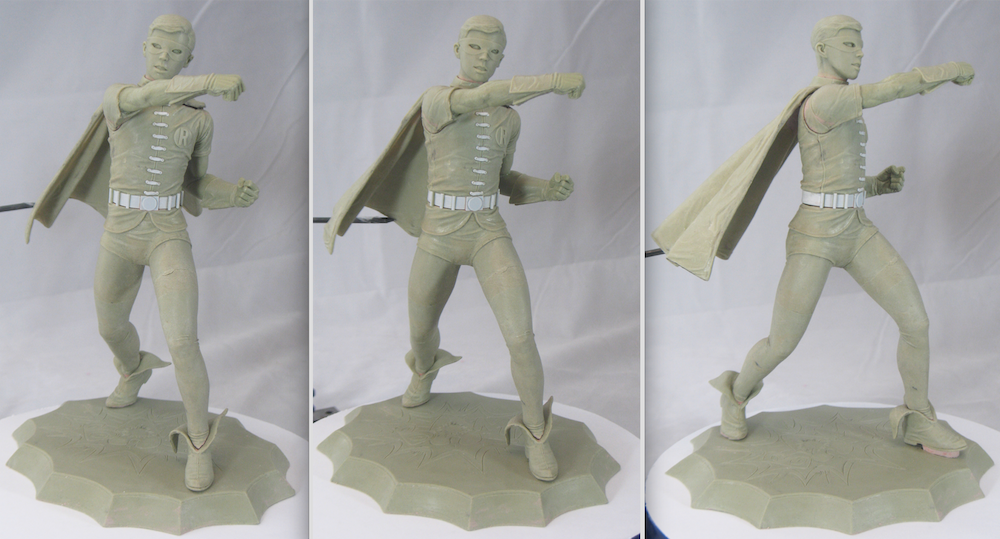 Dan: What was the best part about putting this statue together?

Jean: The best part was getting the opportunity to make another contribution to the statue line! I never get tired of the ’66 stuff. Robin will be my 20th sculpture for this license, including the busts, banks and the Joker and Robin statues.

Barry: The best part for me was to finally come through with that original concept for the busts. That was almost four years ago now! 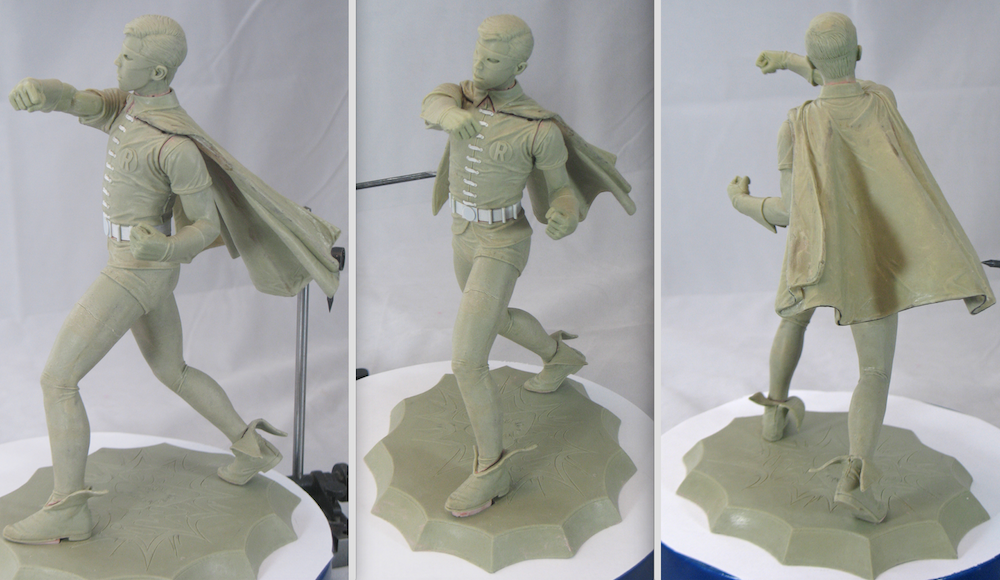 Jean: The worst part is making sure I do justice to each character’s representation and the actor’s likeness.

Barry: I don’t think there really was a worst part. If I had to come up with something, it would be hoping that I chose the right sound effect for his base. POW!! and BAM! seemed to work best since they’re some of the most common. BIFF was a close second for Robin. CLUNK-ETH was never on the table.

Dan: We now have Batman, Batgirl and Catwoman, with Joker and Robin on the way. What statue would you like to see next?

Barry: This will never happen, so don’t get your hopes up, but I’ll go way out there and say Nora Clavicle’s gang members with their evening gowns, masquerade masks, revolvers and loot bags. The image of them robbing the bank in those outfits is the embodiment of crime that can only happen in Gotham City. Jean: I think Mr. Freeze would make a great statue, with the full backpack and freeze rifle. Maybe the George Sanders incarnation with the helmet since we’ve done Otto Preminger in the line of busts. (NOTE from Dan: Sanders’ likeness is not part of the overall merch license, but you can barely see his face in the helmet, so who knows…) Dan: I wrote here that Burt Ward’s Robin is the platonic ideal for the character. I truly believe that. Where do you rank this Robin among all the others?

Jean: I think in terms of live action, he was the best. The earlier serials portrayed him as a Golden Age-style sidekick but Burt Ward really captured the comic feel and the colorful costume was just pulled right out of the comics. He really does portray the early, light-hearted Dick Grayson Robin well. The later Chris O’Donnell Robin wasn’t terrible as a grown-up Boy Wonder, maybe more in the Jason Todd vein, but the movie was pretty terrible. As Robins go, Grayson will always be my favorite and in the Flying Graysons-derived suit, as implausible as it may be as a crime-fighting uniform. Barry: He’s definitely up there. I think much of who the character is today still comes from Burt Ward’s performance, despite the modern shift in tone. While he may be darker and more willing to push back at Batman, the enthusiasm that ’66 Robin had still comes through. Fifty-some years later, that’s a pretty impressive mark to be made on a pop-culture icon. Dan: Last time we talked Robin, I asked you to name you favorite “Holy! —” expression. This time, pick your favorite Robin moment.

Barry: One of my favorite episode(s) is The Joker Goes to School/He Meets His Match, the Grisly Ghoul. Dick and Batman laying it on thick that they don’t know each other just makes me smile. Tough-guy Dick Grayson from the same episodes is a close second! For the EXCLUSIVE FIRST LOOK at the ROBIN statue, click here.