It’s ROBIN WEEK, so we just had to check in with our Tweeterhead friends — Chad Colebank, Trevor Grove and Chuck Williams — on how well the Boy Wonder is coming along.

Julie Newmar Catwoman and Adam West Batman are on their way soon. We’ve written a Batcave-full on each. Now it’s Robin‘s turn!

The Burt Ward version of Batman‘s trusty ally is being refined now and we’ve got an EXCLUSIVE INSIDE LOOK, along with a triple-MIGHTY Q&A with Tweeterhead head Chad Colebank, sculptor Trevor Grove and consultant par excellence Chuck Williams, who’s making sure the details are just so.

One thing I’ve noticed in looking at the pics is the detail of Robin‘s mask, the rivets on his tunic — and even the diamond pattern of his trunks!.

Oh, and how about this tidbit: The company is gonna be taking a slight Bat-turn to 1992 and Batman Returns before jumping on Frank Gorshin’s Riddler! More on that soon. 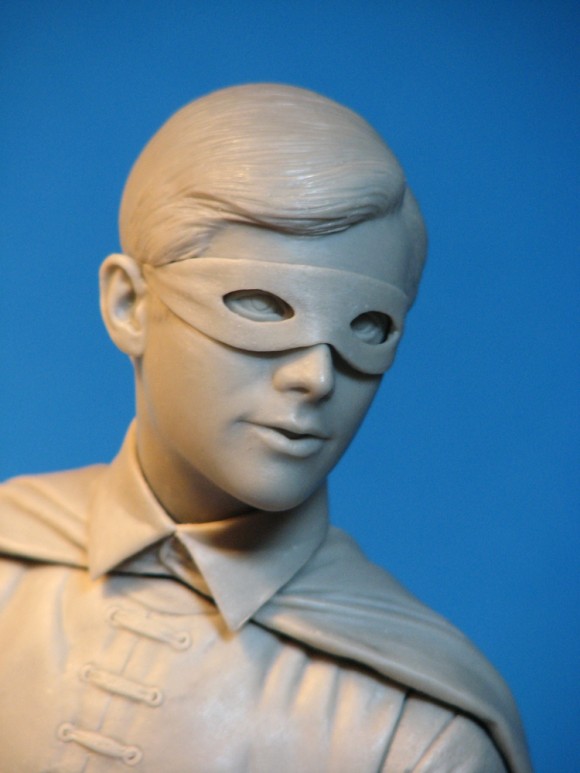 Dan Greenfield: So Robin is cooking along, looking even better than what people saw at Comikaze earlier this fall. What did Burt Ward have to say about it?

Chad Colebank: Burt has seen it via the approval system at Warner Brothers and approved it. We did take it to show him at Comikaze and got some great feedback and some fun stories. We adjusted a few things on him and I think we all agree it looks much better. I plan on taking the paint master to him personally in the next month, so we will see what he thinks.

Explain how he’ll fit with the Batman maquette. I understand there will be multiple pieces in play.

Basically his base mirrors Batman‘s. They will connect together if you choose or you can display them separately. Batman will come with half of the Batcomputer and Robin the other half. They will be able to connect to form a screen-accurate Batcomputer.

We made the cave base separate from the individual maquettes so you can display it however you like. If you choose, you can connect then all together or on their own. This is a big display when it’s all assembled!! 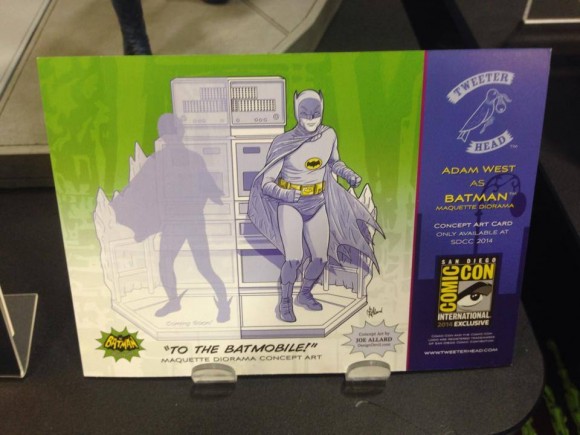 What’s the ETA on this and what’s the price going to be?

He will ship second-quarter 2015 and his price point should be very similar to the price of the Batman maquette. (About $300 — DG) 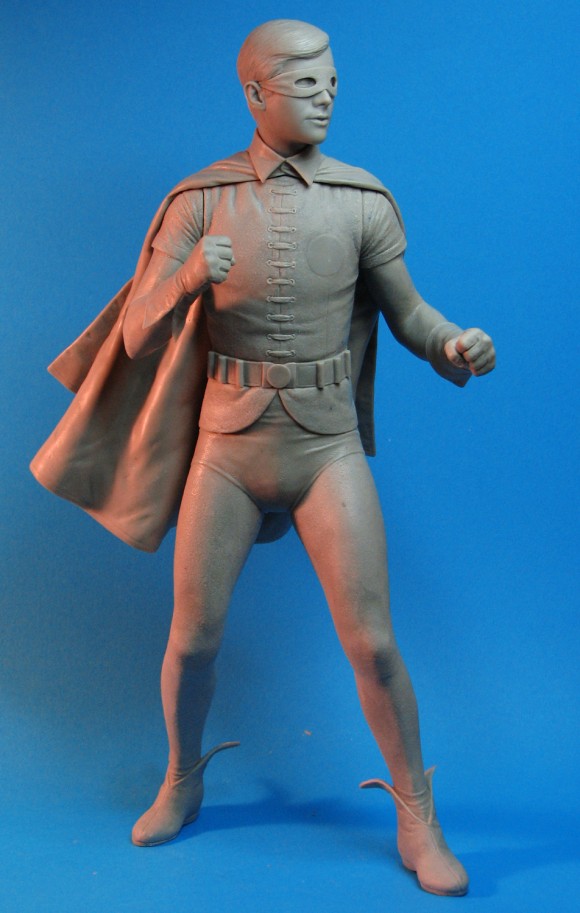 Dan Greenfield: In a number of ways, Robin’s outfit is more ornate than Batman’s. What was the most challenging aspect of getting it just so?

Trevor Grove: That’s a good point! The Batman ’66 outfits are all so great, one really hopes to be able to represent them faithfully. Chuck Williams has been so helpful in that regard, sharing his knowledge of the costumes to help us in making something that honors the character well.

I found the shoes on Robin to be particularly difficult. Photos can be a bit deceptive when you’re trying to interpret what things would look like in 3D, and the shoes were a prime example of that. In general I would say I was just as challenged in Robin’s costume as I was in Batman’s, though. The capes were both quite different, but each one gave me a lot of trouble in trying to get a gentle gesture that didn’t feel too stylized. The lacing on Robin’s vest was a distinct challenge, compared to Batman. Sometimes one or two of the laces is hidden beneath the belt, so you find corroborating between different photo stills can be deceptive! 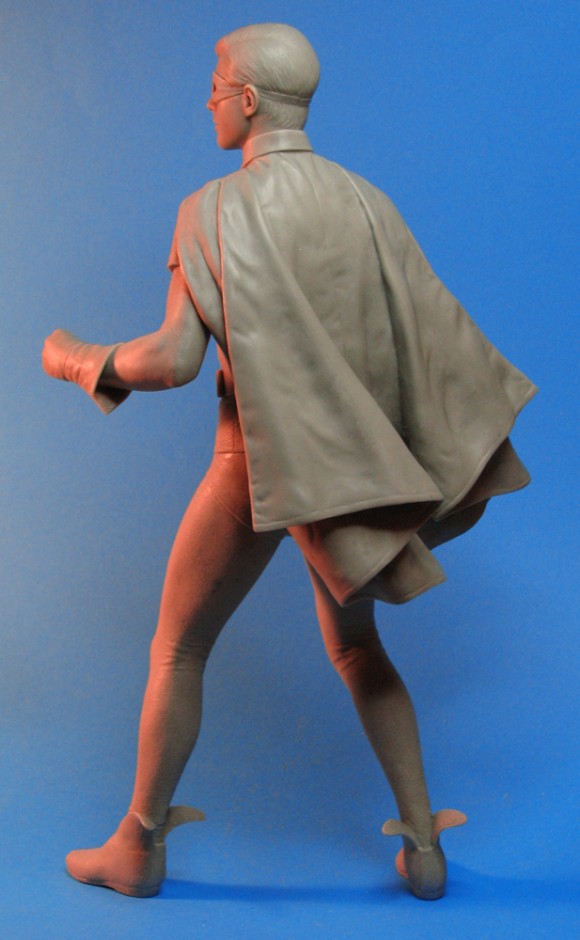 How did you come up with the pose? Or was that a collaboration with you and Chad?

Chad works with artist Joe Allard on getting poses and bases designed on paper before we ever start sculpting. It’s always good to have a heading before you set sail, so to speak, so I really just try to capture what Joe has drawn, only making deviations when things need to look good from multiple angles.

Chad and I work together then to adjust things just so, to get something we’re both happy with. Oftentimes, with how I work, the pose can be altered quite a lot at any stage, but I think we landed on Robin fairly quickly. He had to complement Batman, so their poses have a somewhat mirrored effect. Not in a symmetrical way, but hopefully in a balanced one. 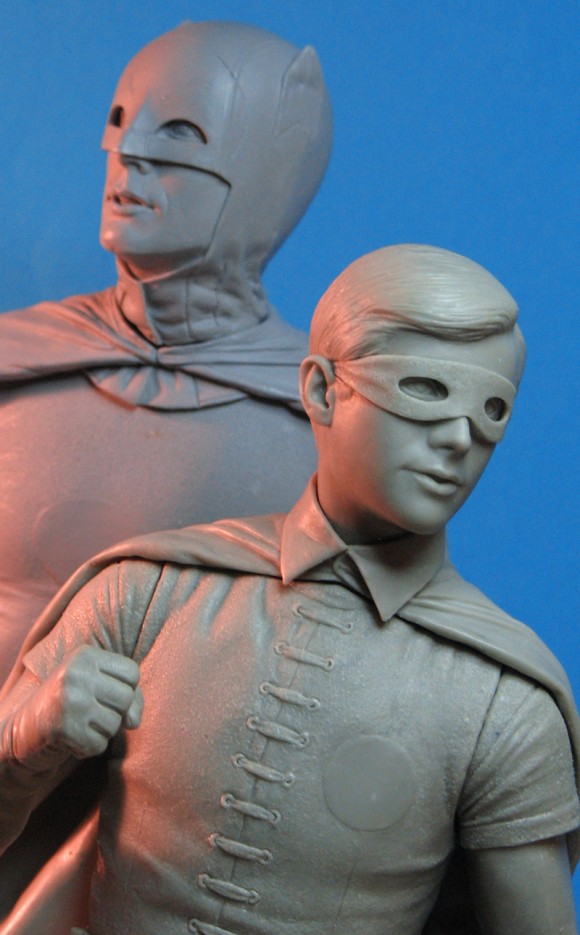 Which character would you love to do soon?

Great question! I’m really excited to work on the Frank Gorshin Riddler, with a close second being Penguin…. Oh! But now I just thought about Egghead and I want to sculpt him. You know, I think an Alfred piece would be cool too… I could keep going…

Dan Greenfield: What were some of the obscure aspects of Robin’s outfit that you wanted to make sure were handled accurately? 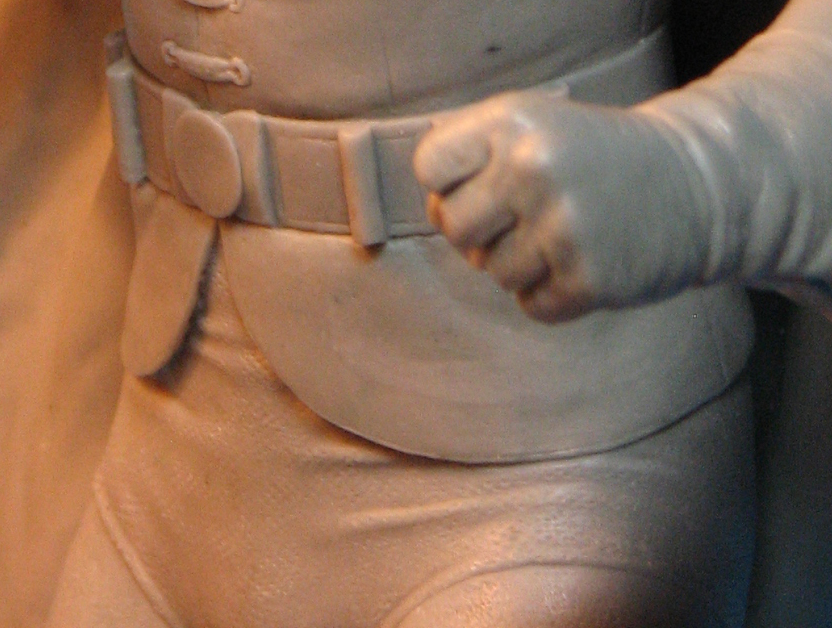 I’m looking forward to seeing the color of Robin’s costume more faithfully rendered by David Fisher and the Tweeterhead team.

How much back and forth was there between you and the Tweeterhead guys? Tell me how your collaboration with them works.

I send Trevor photos of the costume details and after he blocks out the pose and has pretty much nailed the likeness, Chad sends me photos to check the details and to add things that hardcore fans would be looking for, like snaps on the capes, utility belt details and such.

I also provide Pantone color numbers that I matched to a set of screen-used costumes to Chad so the colors are just as accurate as the forms. 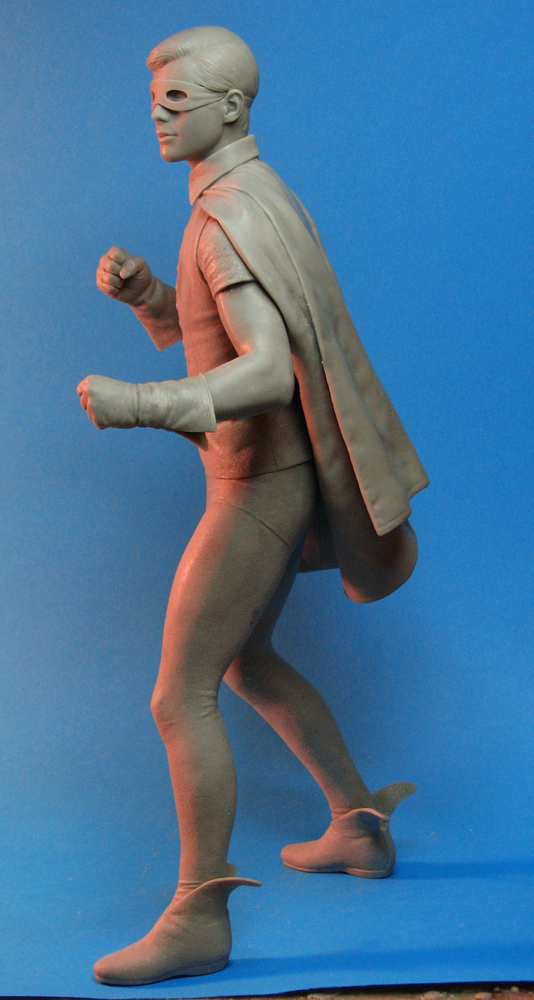 Well, after seeing what Trevor has done so far, I simply can’t wait to see what he does with the Batgirl maquette. 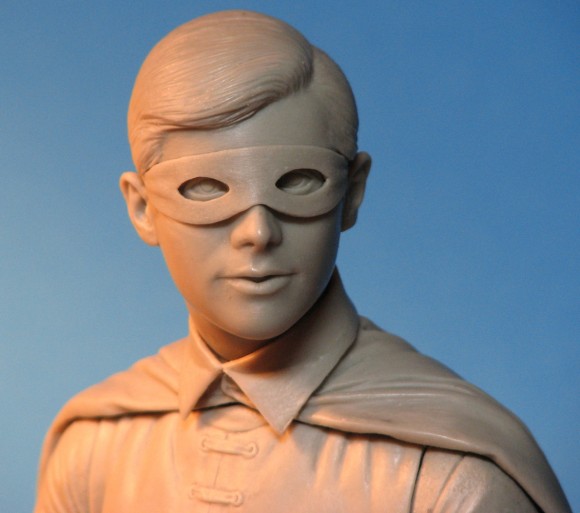