To the Batcave! The 2017 release looks to make its mark as of the great BATMAN ’66 collectibles …

For 13 NEW PHOTOS of the Factory BATCAVE Model: Click here.

Some eagle-eyed fans at San Diego Comic-Con saw it, but here for the first time anywhere, we give you a full, detailed look at Factory Entertainment’s 1966 TV Batcave, a high-end collectible primed for release next year.

Actually, there’s so much to show you, you’ll be getting this special, behind-the-scenes look in two parts: First, here’s an interview with Barry Eldridge, Factory’s creative director. He’s got all the Bat-skinny on what’s going to be one of the biggest of all Batman ’66 releases. Then, later this week, we’ll bring you a special 13 PICTURES gallery that will take you even deeper into the Batcave.

This is one of those items that really gets me on a gut level. When I was Little Dan, I remember making a ’66 Batcave from a shoebox. And of course when I was Not Quite As Little Dan, I got my Mego Batcave, my all-time favorite toy.

But this is something else entirely. Observe, citizens … 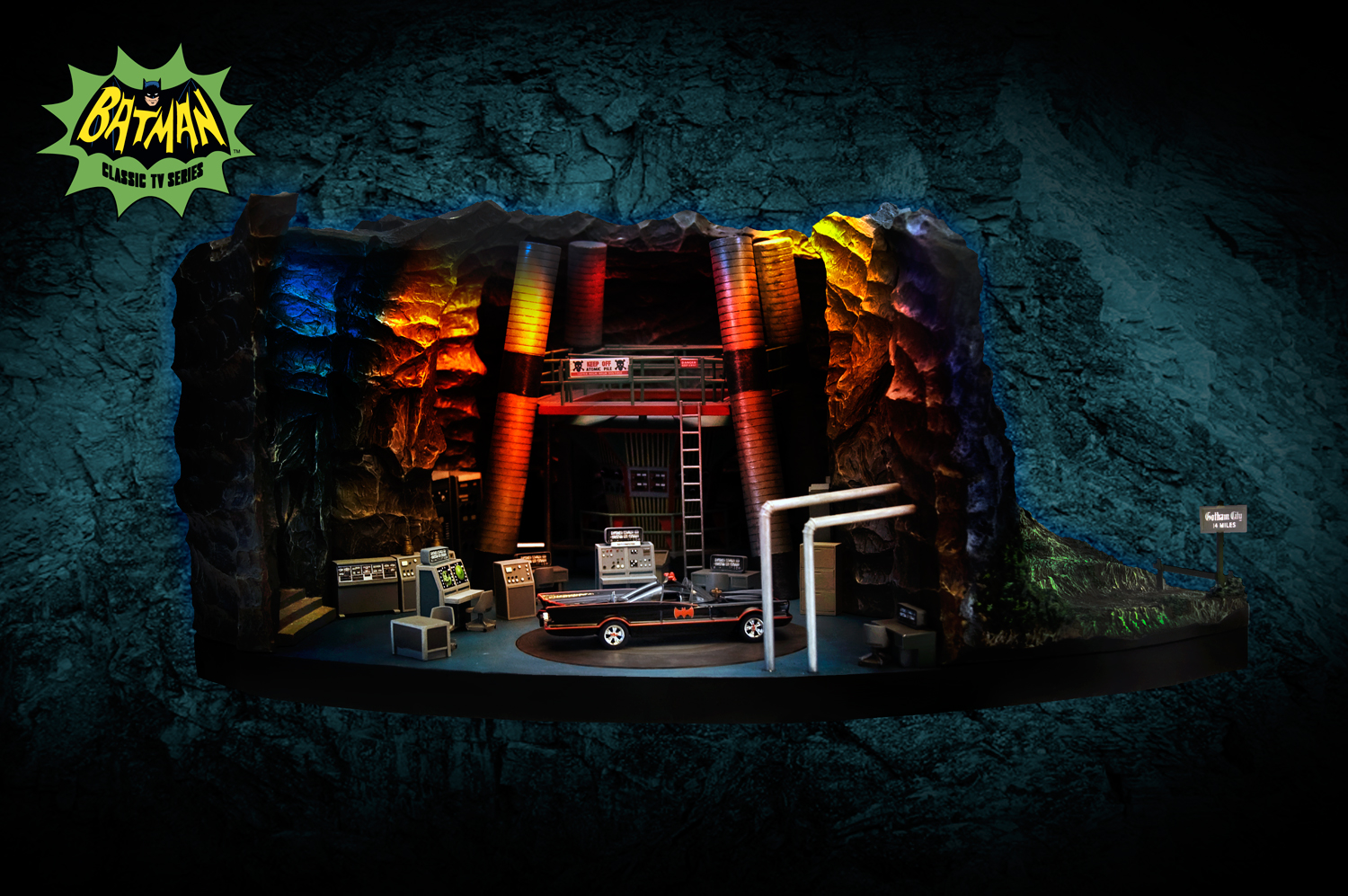 The Batcave with prototype lighting.

Dan Greenfield: How did this whole project come about?

Barry Eldridge: We have already produced several popular pieces that concentrate on architectural exteriors, but we wanted to try and produce an interior piece, a replica set in miniature if you like.

And truth be told, let’s be honest: We all had playsets as children and enjoyed them; there was nothing quite like hunkering down with a cool and immersive playset, was there? Our intention here is to take that to the next level and power up and reimagine the humble playset as a detailed, mature collectible that can be a centerpiece of any collection.

So we drew up a wish list of iconic interiors that might be suited to this execution, we also looked at the most popular playsets of all time and noticed that the Batcave enjoys the honor of being one of the most popular subjects. Whether you were a kid of the ’60s, ’70s, ’80s, ’90s or even the ’00s there has always been a Batcave playset of some kind available, right?

But let’s be honest, they have all been, well, pretty lacking in some way and never lived up to our expectations did they? So we felt that fans needed an actual heirloom quality Batcave that they can really be proud of owning. Where better to start than with the ’66 TV series version? 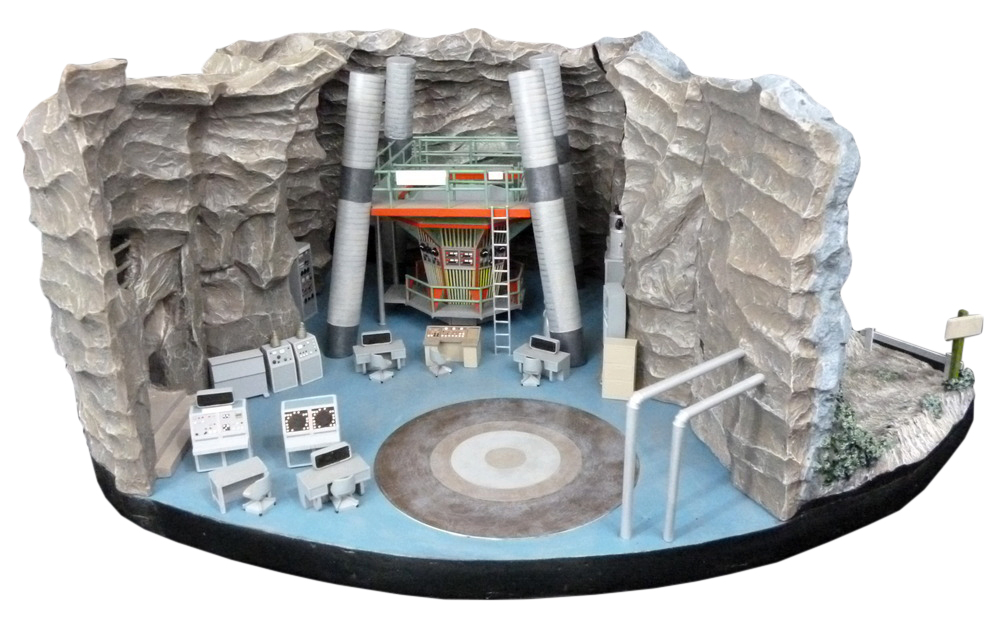 Dan: What materials are you working with? It looks like it will be pretty heavy.

Barry: The piece is mixed media, a combination of resin, plastic and metal parts. The majority of the cave and base are heavyweight polystone — it’s a weighty piece! Around 12 pounds. Every piece will be hand-made and hand-painted and will ship in a presentation and storage box with a detailed booklet explaining the piece.

Dan: If you look at the Batcave on TV, the rock walls reflect different colors, like purple, because of the materials and lighting. It really adds something to the set design. How will you replicate that look?

Barry: Great question, we felt it equally important. Of all the Batman TV series’ unique properties, its look was key and that was achieved through a pretty interesting lighting scheme. So, just like the real set we will be lighting it, but instead of PAR cans and stage lights we will have mini LEDs. They will be multi-colored to create the color-wash effects seen on screen. We are also including some color change lights to recreate the changing color schemes. The piece will incorporate over a dozen individual ‘stage’ lights, hidden in similar locations to the actual stage lights.

We can definitely confirm it will have battery power; we are still investigating whether it can also include an outlet option. We will keep you posted. 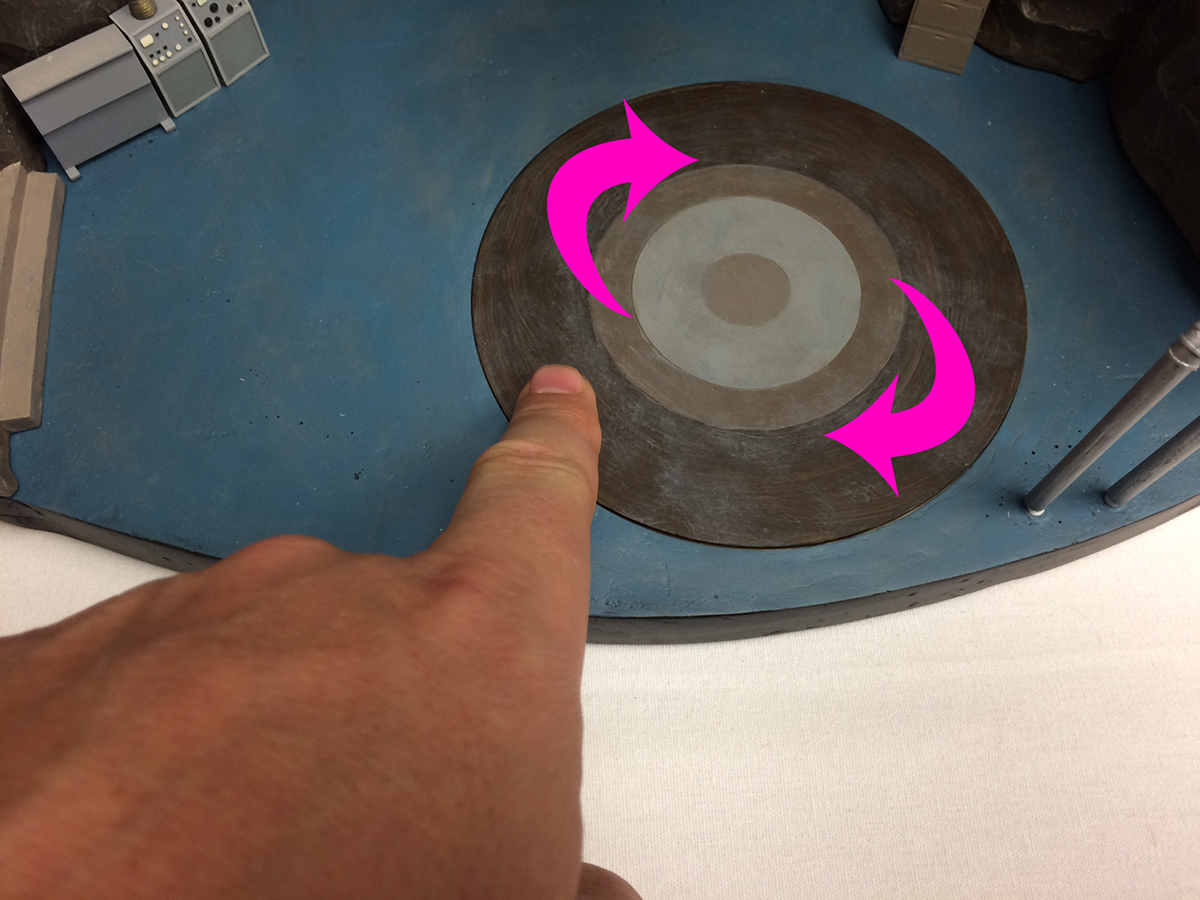 Dan: Will the Batcomputer or other machinery light up? Will the Batmobile platform turn? Explain some of the features …

Barry: The turntable can be moved, manually, so you can position a Batmobile model ‘just so’; there is also a door that can be removed to open or close the cave entrance and you can remove the crash barrier at the exit if you need to make a quick getaway.

Almost all the furniture is an individual and movable part so you can position each piece within the set exactly as you like. Just like the original show you will be able to move the set dressing around to replicate different scenes and shots. Because the pieces are loose and most of them are incredibly small there is no practical way to light up the individual consoles and machinery. It would be great, we concede, but we are bound by the limitations of affordable technology and scale on that front. The LED lights that we will be incorporating will help create a little bit of on-screen magic. 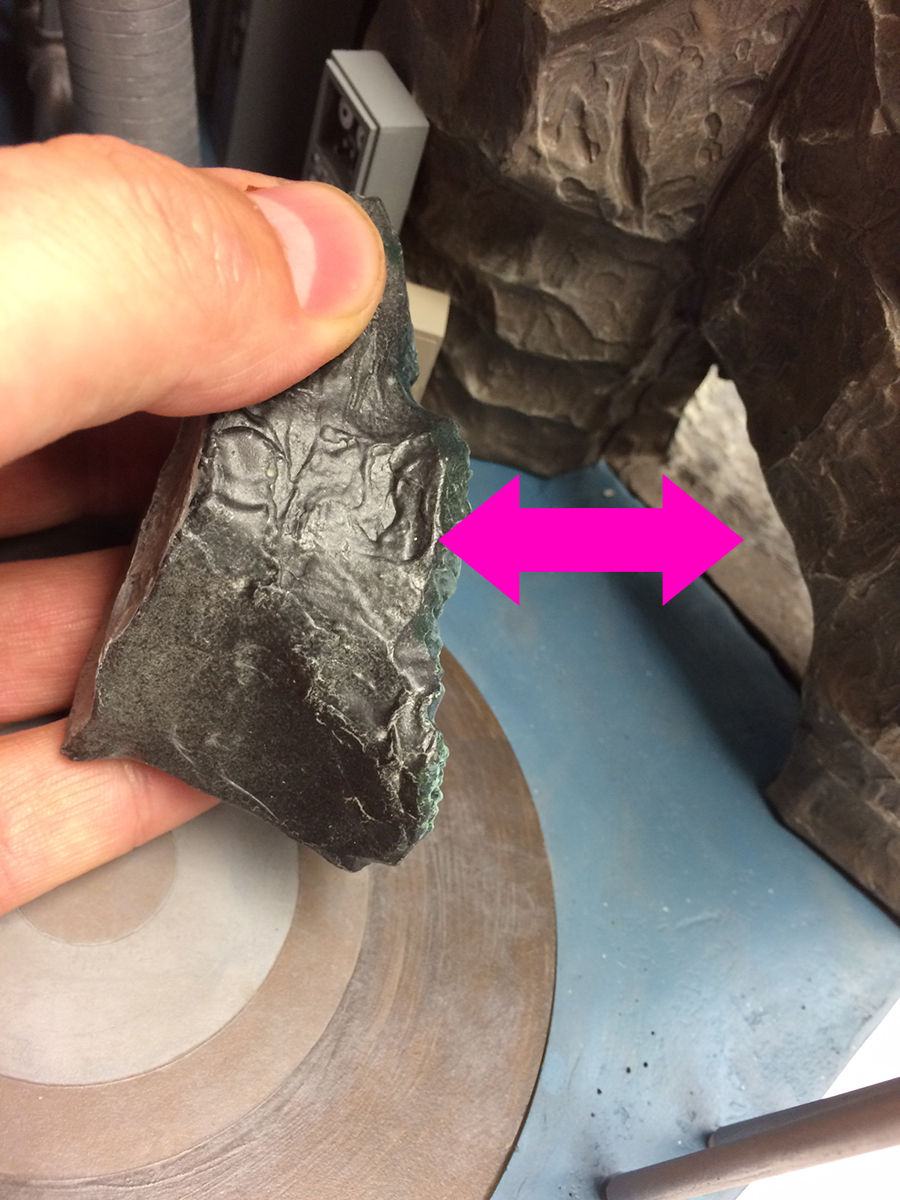 Dan: Will it come with a Batmobile and figures? If not, what scale is this?

Barry: It will not include a Batmobile, but it has been carefully sized to 1:50th scale to ensure that it fits a certain well-known and much loved die-cast model (which of course is sold separately). No figures are included at this time, but we hope this will be the first in a line of desktop interior replicas and that we can offer additional parts and accessories in the future, if fans want them.

Dan: Can you give me an estimate on price and when this will be available?

Barry: The product will launch in 2017, likely toward the latter half. We are still in pre-production and licensor approvals at this time so it’s too early to give an exact date, but the product will be made available for pre-order at least 6 months prior to its arrival and as with all of our pre-orders, no deposits or payments of any kind are due until the product is physically in our warehouse. It will be a numbered, limited edition; the final edition size is TBD but it will be no more than 500 pieces. Price is also not confirmed at this time but it will be in the region of $400 to $500. 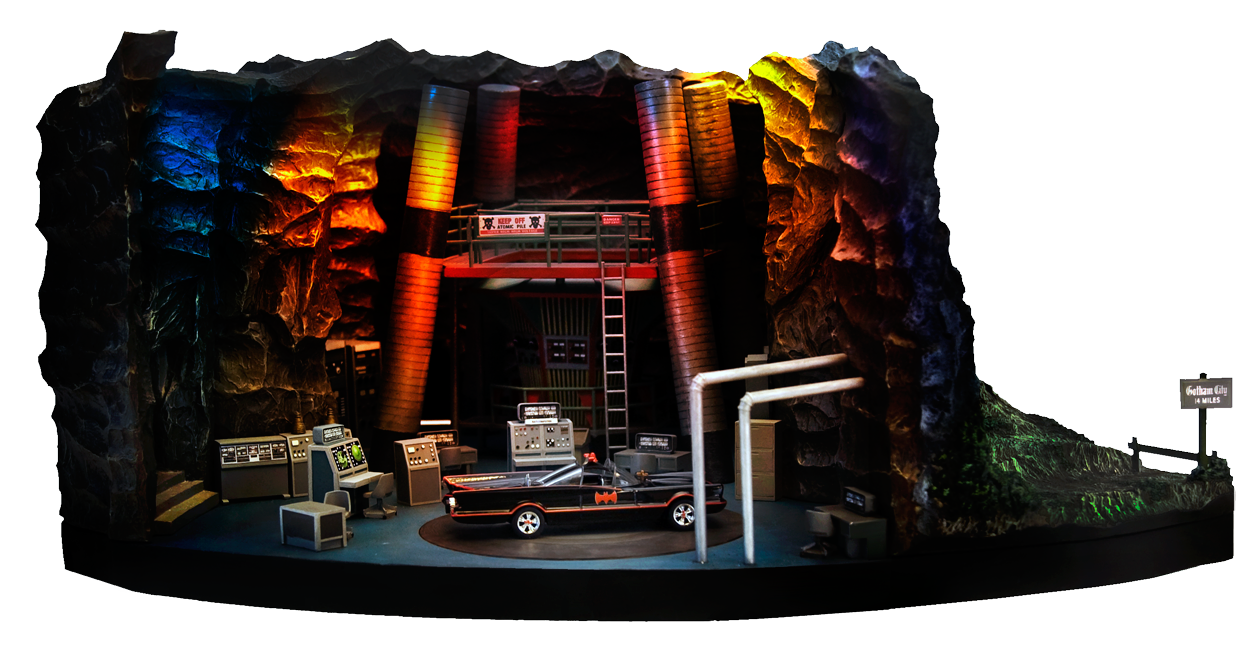 The Batcave with prototype lighting.