Boom! Studios has been having a field day with its Adventure Time comics — and coming in January is a doozy. We talk to the creative team behind the odd couple of Princess Bubblegum and Marceline, the Vampire Queen.

Writer Meredith Gran, who gave you Marceline and the Scream Queens, is back with a six-issue miniseries, Adventure Time: Marceline Gone Adrift, and she’s got newcomer artist Carey Pietsch along for the voyage. The gist? Marceline is on the rampage, gets accidentally flung across the universe by Princess Bubblegum, who feels bad about it and takes off to rescue her.

Got it? Good. Here’s a double MIGHTY Q&A with Gran and Pietsch, as well as some awesome EXCLUSIVE art from Issue #1 — on sale Jan. 14 — sketches and two of the covers, by Reimena Yee and Britt Wilson. 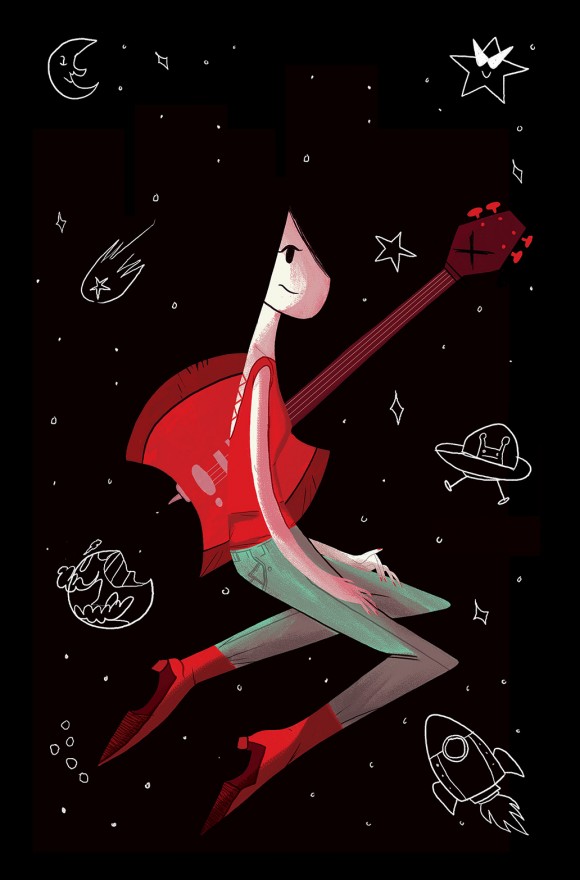 Dan Greenfield: This is kind of your first big gig, isn’t it? How did it come about?

Carey Pietsch: It is, and I couldn’t have asked for a more exciting longer-form project to start out with! I’m totally over the moon about it, and I think that fills my quota of terrible space jokes for the rest of the year.

I started working with Boom! a little after SPX last year; I think Shannon Watters picked up a minicomic I had there and passed it along to Whitney Leopard. Since then, I’ve been lucky to work with the two of them, Cameron Chittock and Dafna Pleban (who have all been thoughtful, enthusiastic editors!) on a whole host of smaller projects — covers, the artwork for backup comics written by excellent cartoonists, and a very few short backups I’ve both written and drawn.

When Whitney asked me if I wanted to work on this project, I said yes in a heartbeat! Marceline and Princess Bubblegum are two of my absolute favorite AT characters, and the pitch really appealed to my little sci-fi/speculative fiction-fan heart. On top of all that, I love Meredith Gran‘s ongoing webcomic, Octopus Pie, and her earlier AT comic, Marceline and the Scream Queens, and I’m so happy to get to work with her. Her scripts have been a real pleasure to work from, and I can’t wait for you to get to read them! 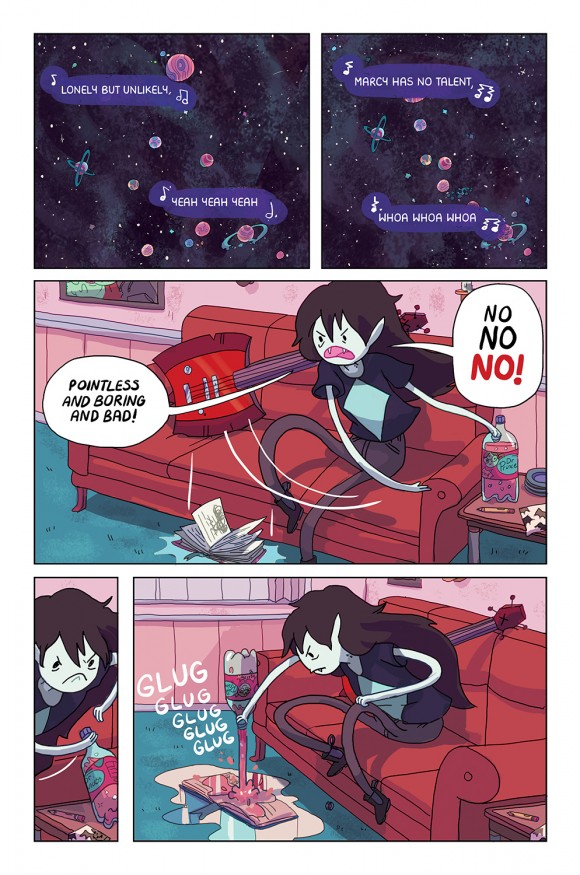 You have your own distinct style. How do you work within the Adventure Time universe while also making the art your own? I’m always curious about that.

All of the backup comics and covers I mentioned above have been really fun projects in their own right, but I think they were also an excellent warmup and a way to start to learn how to balance just that. Most of the personal projects I’d done in the past featured figures that were a little less stylized, but it was honestly freeing to be able to push emotion and expression with these bendier, cartoonier models. That expressiveness has bled back into my other work as well, and I’ve enjoyed experimenting with more physical acting — trying actively to make comics that pay more attention to what animators do incredibly well. 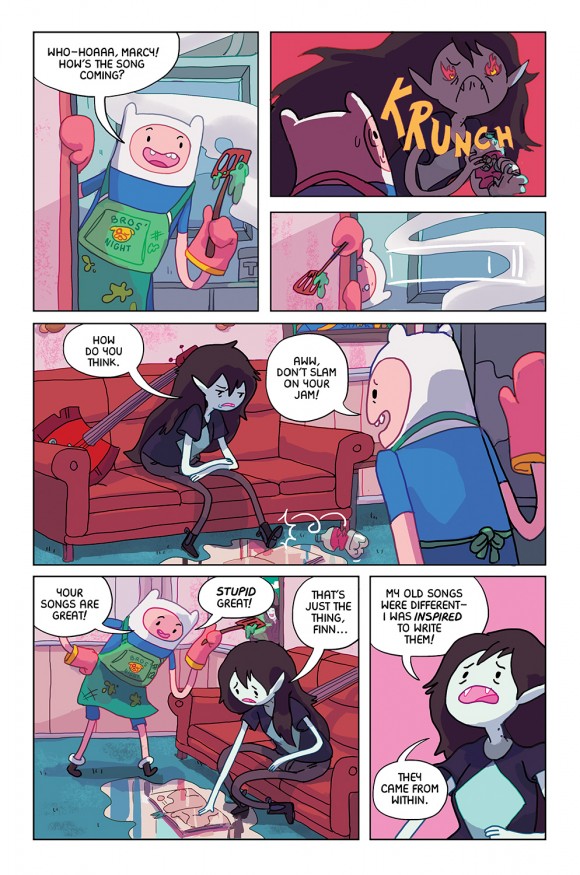 As we get deeper into the story and encounter new characters and situations and devices, I’ve been digging into old AT model sheets and the Art of Ooo book, paying more attention to making designs that could conceivably fit into the world, and trying find a midpoint between my default settings and their Ooo counterparts. But that’s more of a fun challenge than a constraint! Adventure Time takes place in an incredibly vast, expansive universe, and I’m glad to have the chance to play around in it a little bit. 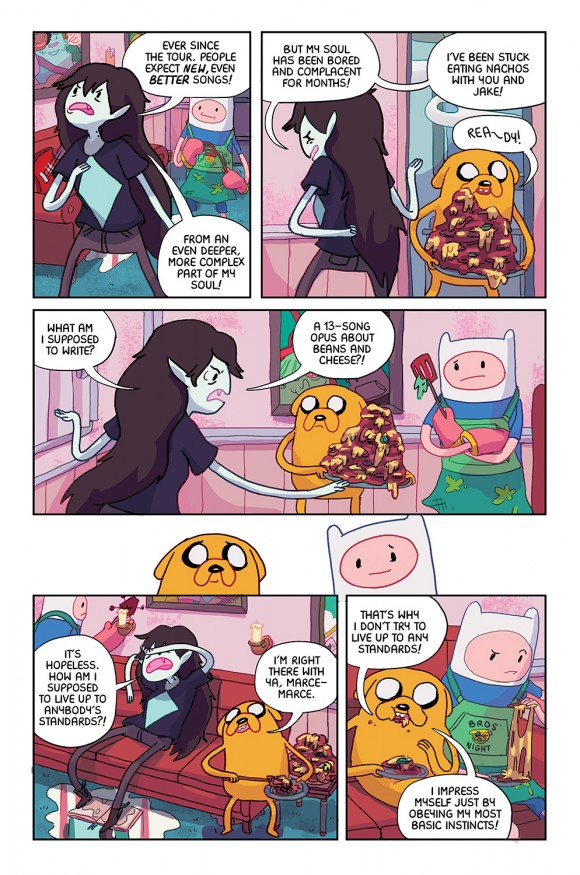 Have you been an Adventure Time fan from the get-go or is this something you’ve had to catch up with?

I’ve been a big fan for a few years now — I think I came in around the fourth season of the show. I didn’t start reading the comics in earnest until early last year, but I love the work that Ryan North, Shelli Paroline and Braden Lamb have done on the main run, and it’s been so exciting to see other writers and artists tackle other aspects of the world in miniseries spin-offs! That’s such a great way to explore stories about characters who don’t get quite as much time in the spotlight as the main duo, and I’m selfishly delighted to get to work on part of Marcy and PBubs‘ story.

Half of the fun of Adventure Time, for me, is chatting about it with friends who watch the show or read the comics. My older younger brother (I have two) actually introduced me to the comics, and for a fresh perspective, I get to watch the show with my younger brother (who’s 12) when I visit home. When last asked, his Top Three favorite characters were BMO, Ice King and Doctor Princess. But he quickly added that Marceline and Bubblegum are definitely in his Top 10. 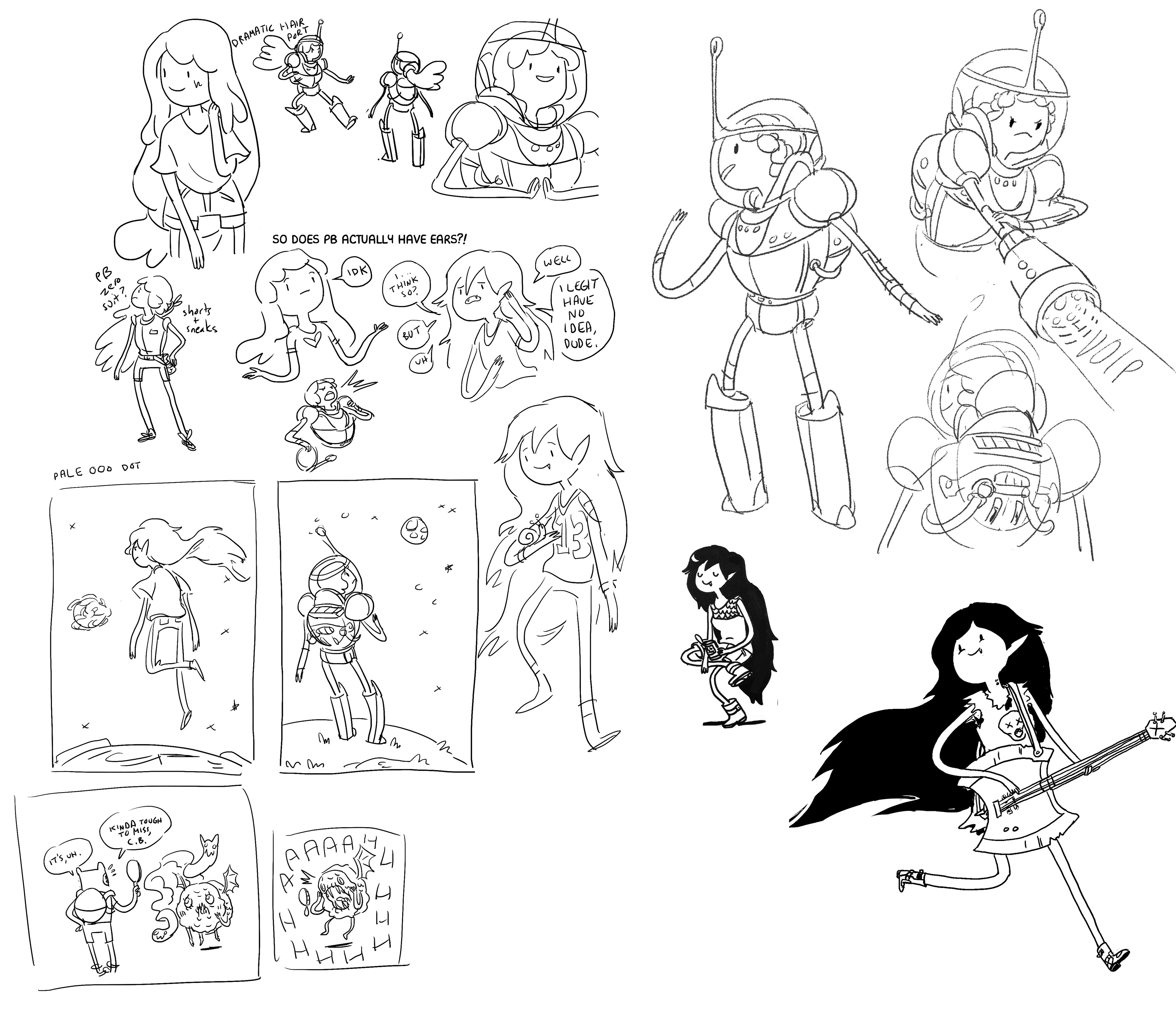 Dan Greenfield: What goes into a good Adventure Time story?

Meredith Gran: It approaches fantasy with sort of a lazy sense of wonder. All these neat supernatural things happen, but the audience is encouraged to have fun and not dwell on the exact reasons. And at the center of the story there’s generally some element of adolescence or young adulthood. 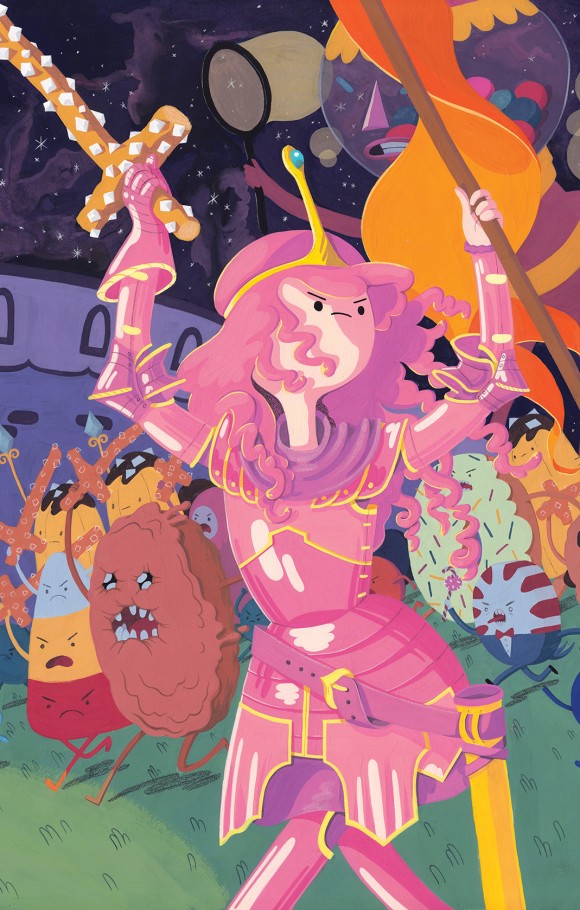 What is that you dig about Marceline and Princess Bubblegum — and the way they play off each other?

Marcy is sort of a sensitive creature, while PB is an intellectual. So this clashes a lot. Marceline has the ability to reflect Bubblegum‘s ugliness back at her, but PB is too mature for that. They both take themselves way too seriously — that’s why they don’t get along. Part of what I’m doing in this series is exploring their younger, past relationship. 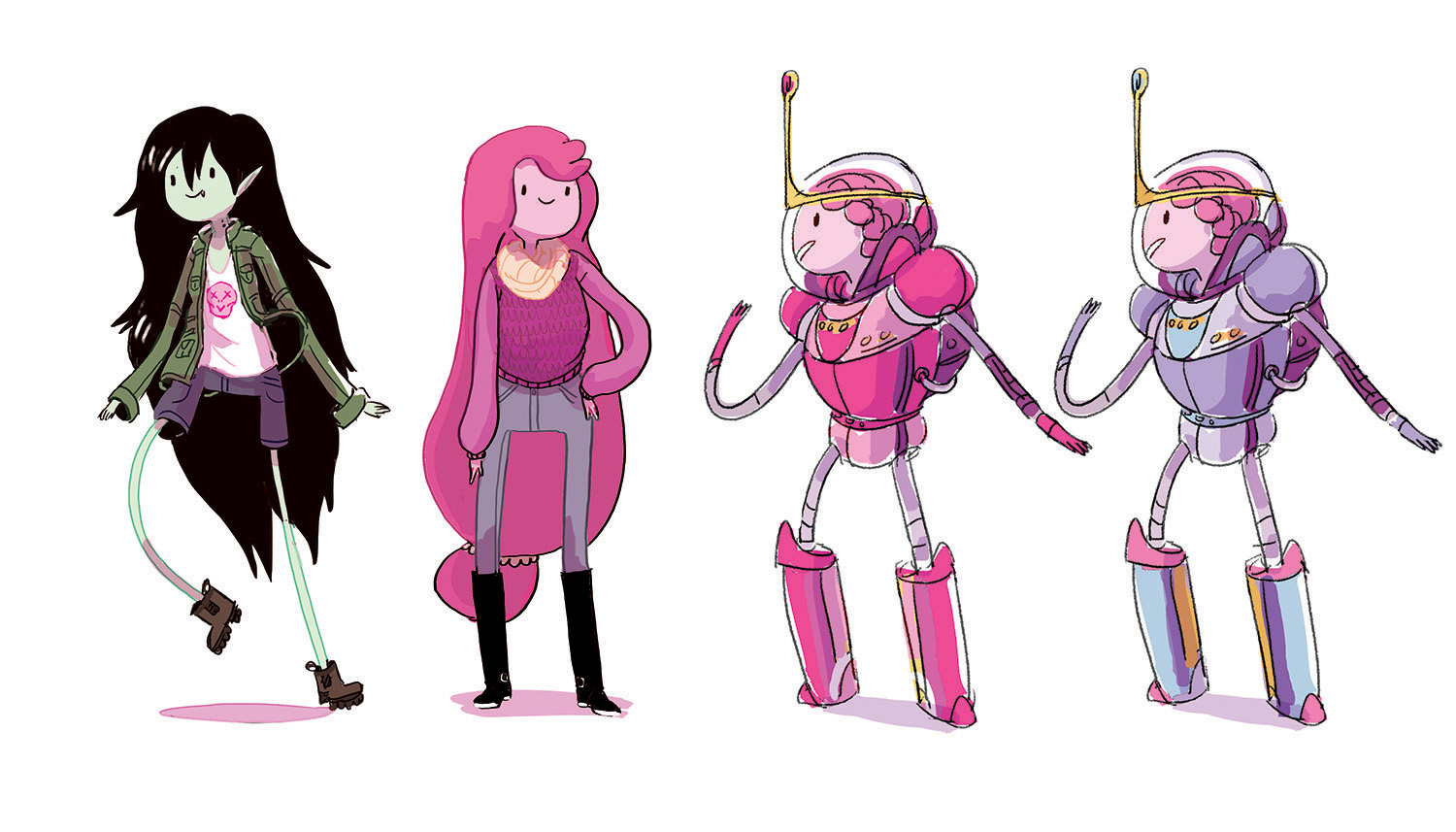 Describe your collaboration with Carey

Carey and I haven’t communicated much. We’re both doing our own thing, which seems fine — though I guess we’ll see how it changes after Issue #1 is finished. I do compulsively check her social media feeds for peeks at the art, though.