The cover artist of The Strain shows you how he helps create the creepy world of Dark Horse’s graphic novels — which are based on the books that form the foundation of FX’s new TV show, premiering July 13.

You can’t look anywhere without seeing that nasty worm thing pop out of an eyeball in the ads for FX’s The Strain. You want to turn away but you keep turning back. That’s the appeal. 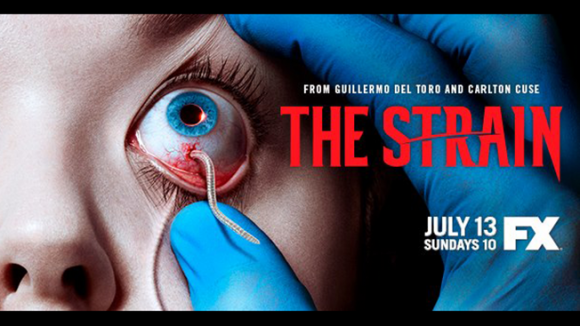 The show is based on the vampire-creepfest novels by Guillermo del Toro and Chuck Hogan, and the graphic novel adaptations by David Lapham and Mike Huddleston.

Dark Horse, which worked closely with del Toro, has collected the first 11 issues of the graphic novels in hardcover, out now.

Here’s Gist on how the covers to the issues were crafted:

Recently we have been starting covers in blocks of six or so. When David Lapham completes the outline we (Sierra Hahn, Jim Gibbons, Guillermo del Toro, and myself) begin a series of emails to discuss ideas that would make the best covers. A final script is not really required, as I was a huge fan of the novels before working on the comic. Once we settle on ideas for the next six covers I just start working.

When we started discussing the first covers of The Night Eternal, something that was discussed was the passage of time, we really wanted something that showed this.  So we decided to focus on Eph, he is the character that is changed the most by the time between books. The other aspect of the story that would show this is a bit of a spoiler so therefore would not make a good cover. Del Toro wanted some “Frazetta-like” action to show the shift in tone of the story.  These thumbnails are what I came up with. Since we had a pretty solid idea on this one, I mainly focused on cropping and camera placement. 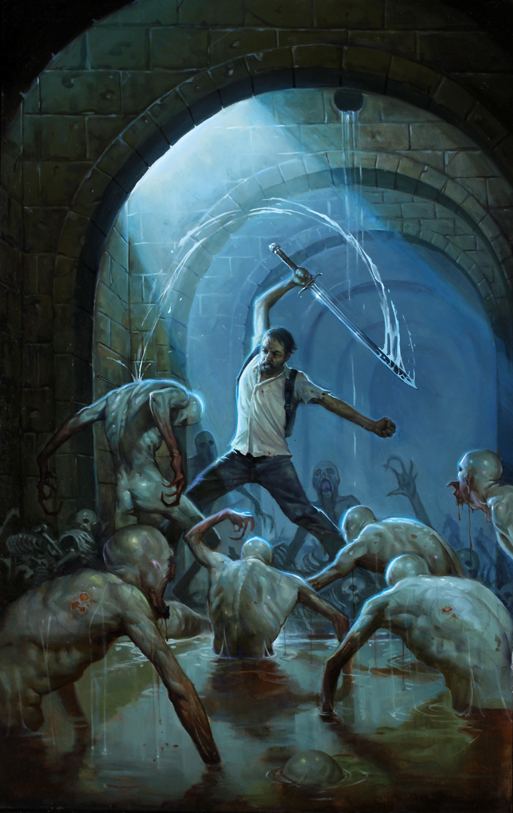 For the final it was important to show the aforementioned “passage of time” so this is a different Eph than we have seen before. He has a beard, disheveled hair, his shirt is torn, and he is quite thin. I also added in a bunch of skeletons and such to show that the strigoi presence is now open and well established.

For the second cover of The Night Eternal we wanted an iconic shot of the other big change in the story (I will not reveal what that is, as it is a spoiler). Let’s just say Gabriel Bolivar’s role in the story becomes much more important. Del Toro had been wanting me to do a nice iconic character study of Bolivar for A LONG TIME. I am a huge fan of the “lost edge” compositions of James Bama and J. C. Leyendecker, and so I pursued this angle and turned in a bunch of poses that emphasized the monstrous “rock star” quality of the character. 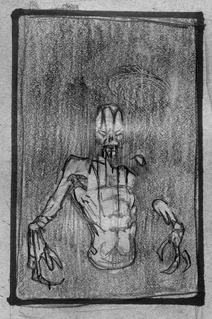 I can’t remember who brought it up, but we all agreed the stinger had been played out at this point so I removed it from the pose we like best and this is the sketch we went with. 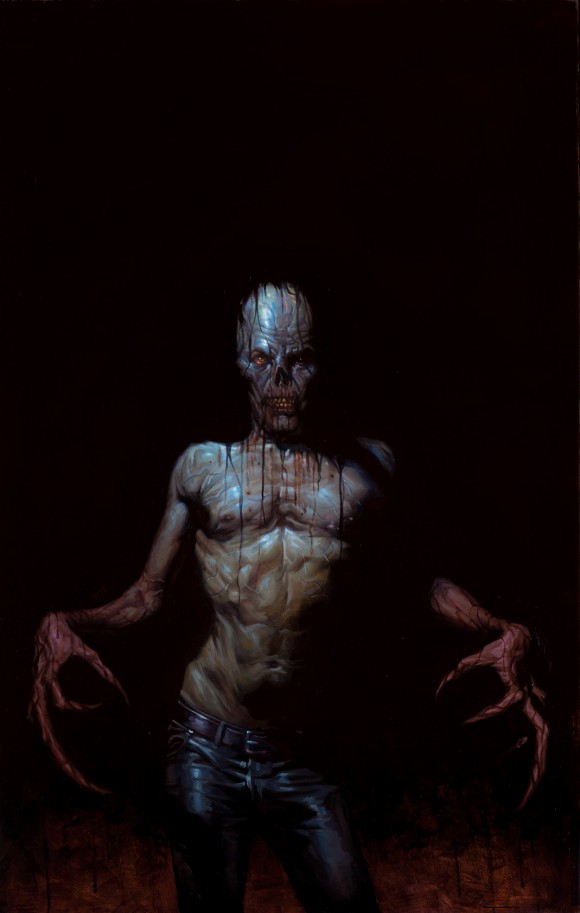 The final for this piece was pretty straightforward. Since it was a simpler piece I was able to really have fun with the texture of the skin, his expression, and the body language. As I said, this was essentially a character study of a man who was pretty slimy before he was a blood-sucking member of the undead. I couldn’t imagine that his personality was improved by his new condition, so I tried to really bring that out.