Haspiel and Waid bring you The Fox

Home » Haspiel and Waid bring you The Fox

The Red Circle characters have been kicking around for decades now with very mixed success, but clearly Archie’s putting their chips now, with a book that’s not their typical all-ages fare. 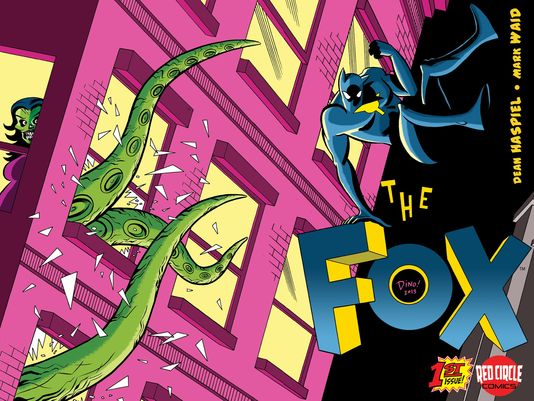 Wraparound cover to The Fox #1

No, this is a straight-up superhero title, with serious talent behind it.

“Believe it or not, the Fox was created 73 years ago and is one of those quirky characters that never made much sense to me until I developed a bizarre story about a superhero with no super powers,” Haspiel said. “At least Batman was rich enough to invent a costume and gadgets that he could fight super-villains with. The Fox just wears black spandex under his work shirt and pants and dons a floppy-eared mask in hopes that martial arts, parkour, and his savvy wit will keep him alive when he stirs up trouble. Luckily, the loose variations of the Fox allows me the latitude to tell the kind of tales I want to, which is about a secret-superhero photo-journalist who is trying to find his way back to normal only to discover that he’s a bona fide freak magnet.” 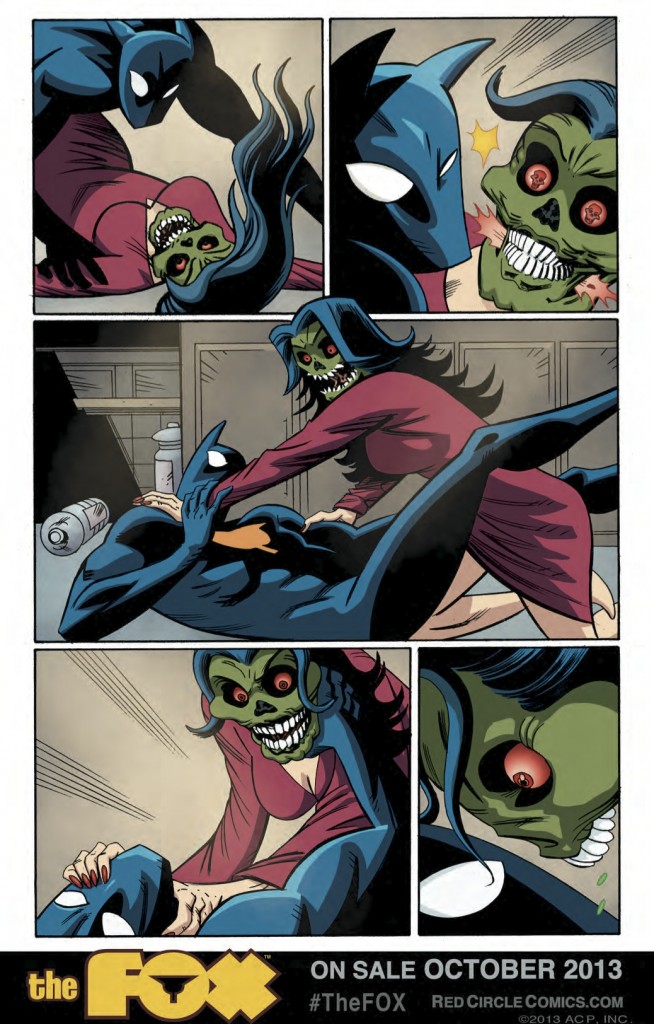 The original Fox debuted in MLJ Comics’ Blue Ribbon Comics #4 in 1940, in a story written by Joe Blair and drawn by Irwin Hasen. Like many Grade Z Golden Age heroes, he faded quickly, and disappeared after only a couple years.

He returned at the height of the Silver Age when MLJ — that’s Archie Comics, folks – tried to capitalize on the success of DC and Marvel, but then, like the rest of the stable, vanished again. Most notably drawn by late cartooning legend Alex Toth, he’s popped up in various incarnations since and was revived a couple years ago one more time when Archie chose to bring their superheroes back for another go-around in a primarily digital-first venture focused on the heroic team the New Crusaders, made up of modern version of old-school characters.

“Dino (Haspiel) had intrigued the Red Circle guys with the idea of him plotting or writing and drawing a Fox series but Dean was looking for someone who had a little more experience with the actual dialogue and actually putting stories together,” Waid said in a phone interview. “And so, he called me and it was the perfect opportunity. … We’d been wanting to work together for a while and I like the collaborative nature of comics. I like batting story ideas back and forth.” 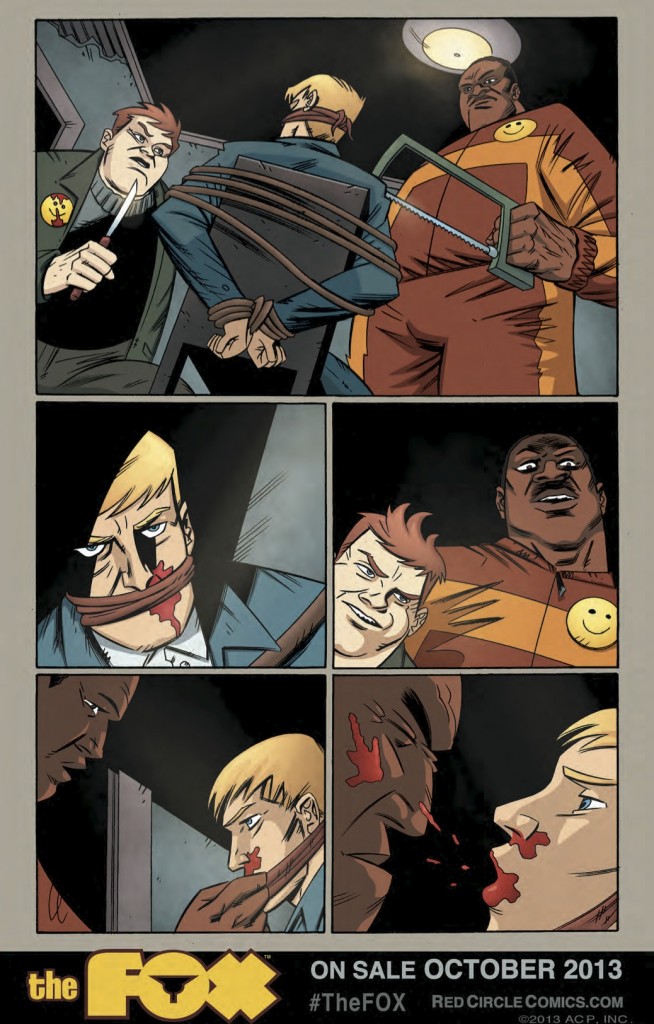 Added Haspiel: “I had a cursory understanding of the Red Circle characters via The Mighty Crusaders, Blue Ribbon Comics, and The Black Hood of the 1980s when I consumed every comic book that graced the newsstands. I remember thinking these ‘new’ characters felt nostalgic and it was confirmed when I discovered that most of them had been created in the 1940s. Current Red Circle Comics editor, Paul Kaminski, has done a stellar job of helping reinvent Archie Comics’ superheroes via the New Crusaders and I’m excited to be a part of it.”

Haspiel explained that it was Toth’s “pulp noir” take on the character that provoked him into taking a shot.

“Like Will Eisner (The Spirit) and C.C. Beck (Captain Marvel/Shazam), Toth was a genius cartoonist who knew how to respectfully satire the tropes of crime fighting while adding something bold to the superhero lexicon,” he said. “With the aid of Mark Waid (and fellow Red Circle creators) Allen Passalaqua, J.M. DeMatteis, Mike Cavallaro, and gang, I aim to achieve a 21st century high-five to the kinds of comic books that recommended the form and took my mind hostage, way before the industry started to compete with video games and Hollywood’s blockbuster iterations.” 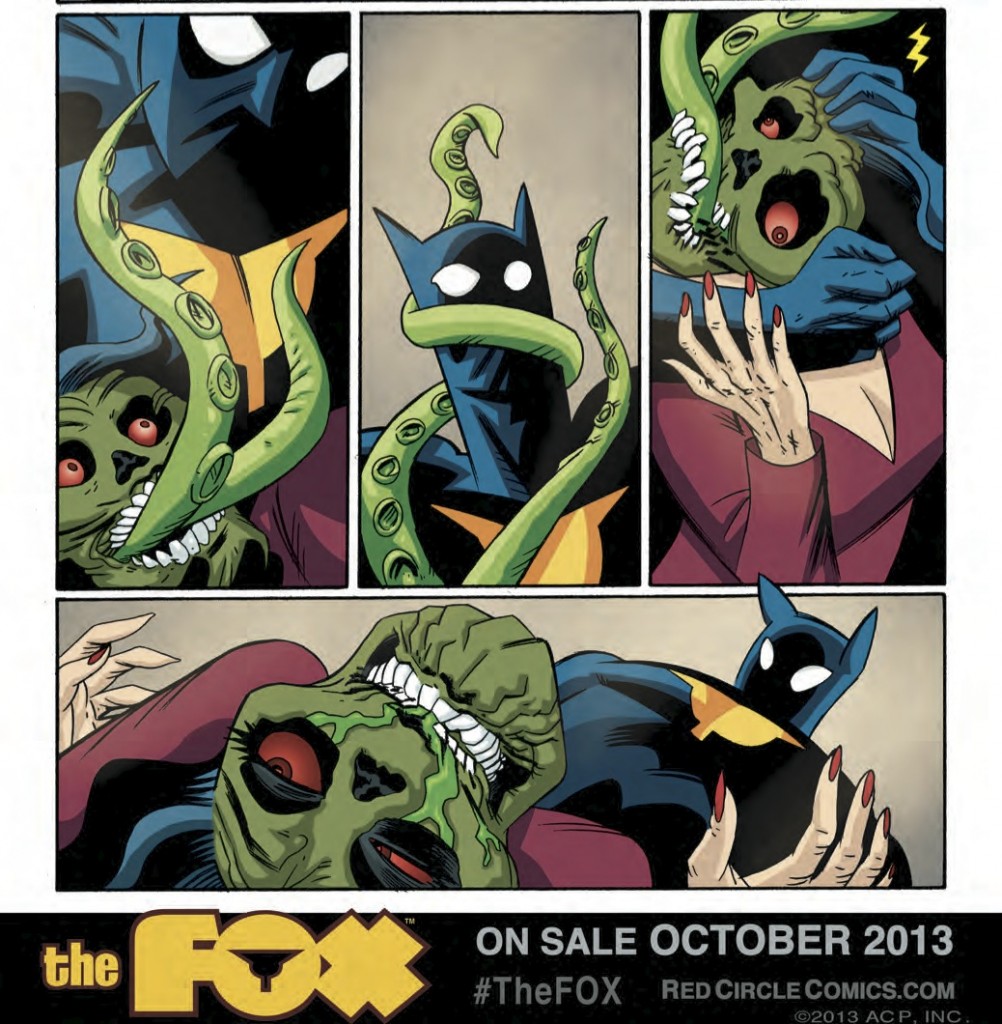 The irony of comics is that they were once considered kids’ stuff. These days, if you attach an “all ages” tag to a book, it can be the death knell. Simply, a lot of readers just want their comics to skew “adult” despite the quality of the work: A really good “all ages” book can wither while a lowest-common-denominator book that has “edgy” pretensions can sell and sell.

For The Fox, the Archie/Red Circle folks are emphasizing that this is straight-up superheroics and not necessarily for the kids. There will be violence. There will be darkness.

But one look at the art – and the creators’ pedigrees — and it’s clear there will be a lot of humor, and youthful accessibility, built in as well.

“There is the marketing term ‘all-ages,’ which tends to speak to kids-only products, and then there’s my understanding of the definition,” Haspiel said. “Like a Pixar movie that can emotionally appeal to children and adults (see ‘Up,’ ‘Toy Story 3,’ etc.), I believe that the best kind of superhero story is the one that can transcend the ages. There’s gotta be something for the kids to latch onto yet something that can resonate with adults. 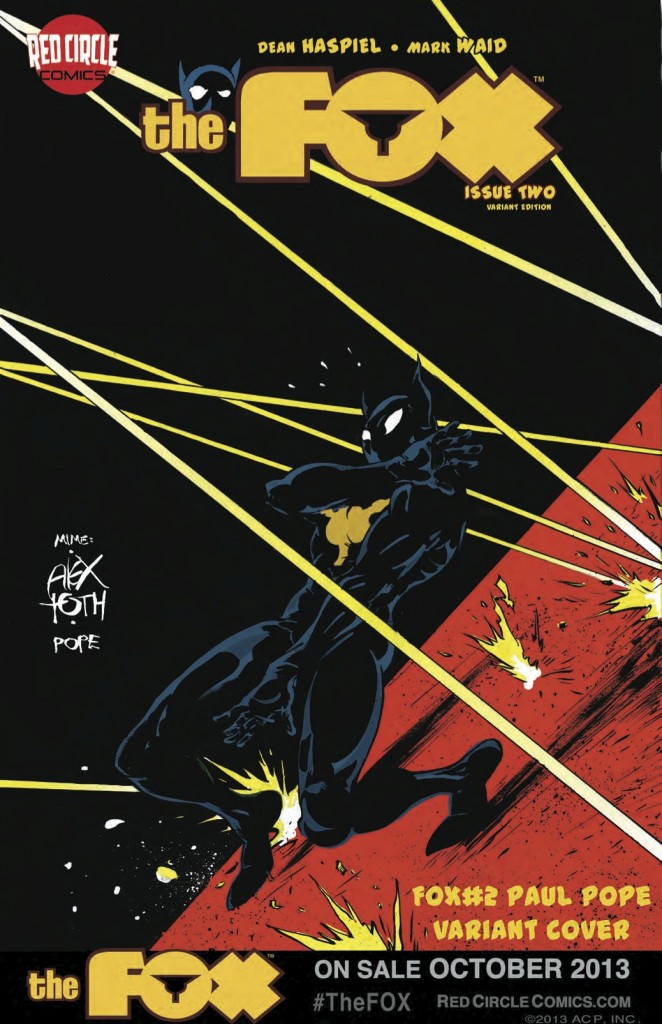 “The Fox is a modern twist on a pulp hero back when costumed characters were amateur detectives with Olympic strength and had a bone to pick with crime. This time around, the Fox is not only contending with common thugs but he’s inadvertently attracting aliens, monsters, mutants, magicians and Satan’s servants.”

The Fox, aka Paul Patton Jr., starts his career with less-than-noble intentions: He’s a news photographer and he figures the best way to make a living is to make his own news. Dress like a crimefighter, take pix, make money. But it’s more than he bargained for so he tries to get out. But as a “freak magnet,” as Haspiel said, all the crazies keep coming at him in Impact City.

The great thing about the Red Circle characters is that even though there’s the hint of a legacy behind them, they are essentially blank slates. Writers and artists can bring their own stamp to them without having to pay fealty to decades of ingrained preconceptions and continuity.

“It’s a very clean entry to modern day,” Waid noted. “There’s nothing about the character that requires any sort of back story or any sort of knowledge of the character. There is some sort of acknowledgement that he is a part of a bigger universe and that there are others like him out there, other Crusaders. (But) nobody has to do any homework in order to read the story. The whole point was to do something that was fresh and new and could be picked up and enjoyed by anybody.”

One of the remarkable aspects of the title is that Waid, 51, and Haspiel, 46, who have more than 50 years of pro comics experience between them, have never worked together before.

Haspiel explained that he and Waid “have been threatening to work with each other ever since he read an unproduced Thor vs. Hulk pitch I wrote for Marvel over a decade ago. And, when Mark’s good friend and great collaborator, Mike Wieringo, unfortunately passed away, we had a sobering conversation at Baltimore Comic-Con in 2007 and vowed to make something together, no matter what.

“Eventually,” he added. “I received the opportunity to write and draw The Fox (thanks to my pal/writer Vito Delsante for recommending me), but I didn’t know what The Fox sounded like and I didn’t want to do it without Mark’s certified mark. Finally, we found our first comic book series to play together with. So, I wrote The Fox pitch and Mark is writing the dialogue after he sees my art and detailed story breakdowns.

“We go over the entire issue so he gets the tone of what I originally intended and then he makes my silly ideas smart while adding buckets of personality. He’s a multiple-award-winning comic book writer for a reason! Basically, we’re working old school “Marvel style” like how Stan Lee worked with Jack Kirby, Steve Ditko, Don Heck, Gene Colan, Dick Ayers, etc. Which is great for me because I get to test some off-the-wall story ideas while Kaminski, Waid, and DeMatteis tether me.”