Comics editor Jim Salicrup has a storied career in the biz — from Spidey at Marvel to WWE at Papercutz! Come meet him this weekend!

Jim is a great guy to talk to. Dry of wit, he’s got many a tale to tell. And he’ll be telling some of them at our MARVEL IN THE ’80s panel on Saturday — with other awesome folks like Ann Nocenti!

He’s among the many guests — like Neal Adams and Fred Hembeck — whom we’re spotlighting ahead of the show.

For the full guest list, click here. Steranko! Arthur Adams! Don McGregor! Herb Trimpe! Larry Hama! And for tickets, click here! East Coast Comicon is at the Meadowlands Exposition Center in N.J. There will be 300 exhibitors, the 1966 Batmobile, cosplay and other contests and so much more!

Jim Salicrup: I don’t think the process of human reproduction employed by my parents to create me is any big secret, but I suspect that’s not really what you’re asking.

In a nutshell, I was a born-in-the-Bronx comics fan who dreamed of one day working at Marvel Comics and living in Manhattan. I hoped to be a comic-book artist, and had read lots of interviews published in fanzines looking for clues on how to break into the business.

I was accepted into the High School of Art and Design, which is where I learned many comic-book artists went, and that was great. And I also sent a post card to Marvel offering to be their “slave.” Well, that was like winning the lottery! My card arrived at a time that Marvel was rapidly expanding and they needed to hire a messenger to bring the comics to the Comics Code Authority.

Then-Editor-in-Chief Roy Thomas, dealing with an expanding line of comics and a relatively small staff, wisely had a policy to try and hire someone who knew something about comics for any position that became available—even for a messenger!

So, I wound up getting hired at Marvel the summer of ’72– before I even started high school! Not that long after, I even moved to Manhattan. As for being a comic-book artist, I decided that editing was really the job for me. But at shows such as the East Coast Comicon, I finally get to fulfill my childhood dream of being a cartoonist—by selling my “Lousy Sketches” for a mere $5 each!

Who says this isn’t the Marvel Age of Dreams Coming True?! 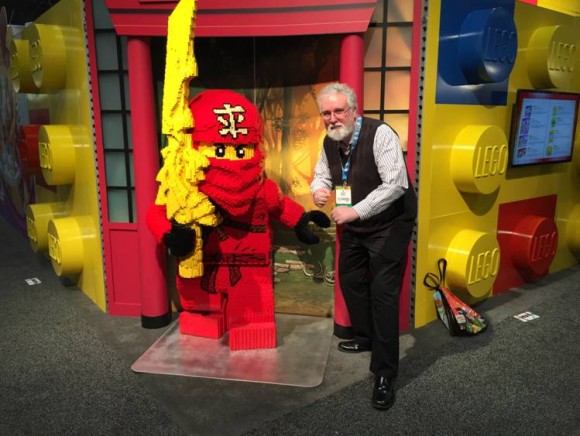 Master of Spinjitzu, Kai, from LEGO NINJAGO and Jim Salicrup, from Papercutz

Dan Greenfield: What are you working on now?

Jim Salicrup: Answering your questions, silly! But again, I suspect that’s not the answer you’re looking for.

I’m currently the Editor-in-Chief of Papercutz, the company I co-founded with Publisher Terry Nantier 10 years ago. We’re dedicated to publishing great graphic novels for all ages.

Jim Salicrup: Gee, there are so many! Most recently it would have to be having three-time WWE World Champion and best-selling author Mick Foley appear at the Papercutz booth to help launch the WWE Superstars series that Mick co-created. Or maybe you know him as Cactus Jack or Dude Love or Mankind?

I’m a huge fan of this amazing man and I’m thrilled that he’s a part of our WWE Superstars graphic novels and comics. We even published a limited-edition comic book of Crazy Christmas, written by Mick’s then-9-year-old son Hugh Foley and illustrated by Jill Thompson, to be given away at New York Comic Con, with all the proceeds going to charity. 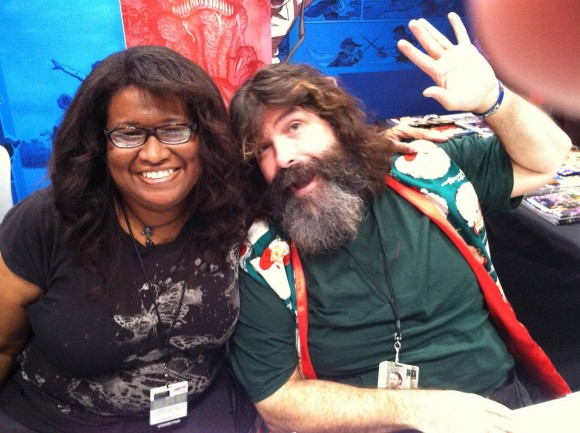 They say you always remember your first, but I sure don’t! Essentially I love all kinds of comics—so it could’ve been anything! My best guess is that it might’ve been a Harvey comic or a Superman comic or a Dell/Gold Key comic or a World Around Us comic.

Anything published by Papercutz and Super Genius, of course! Hey, I don’t spend virtually every waking moment of my life working on these comics and NOT want people to see them! I want everyone to love these comics and graphic novels as much as I do.

But here’s one not mentioned above—Ernest & Rebecca. It’s wonderfully written by Guillaume Bianco and breathtakingly drawn by Antonello Dalena. It’s sort of a female version of Calvin and Hobbes. Rebecca is a lonely 6-and-a-half year-old who is often sick. Ernest is a microbe, a germ, and her magical best friend. But the stories are really about family. Rebecca’s parents are splitting up and her older sister is becoming a teenager and discovering boys. 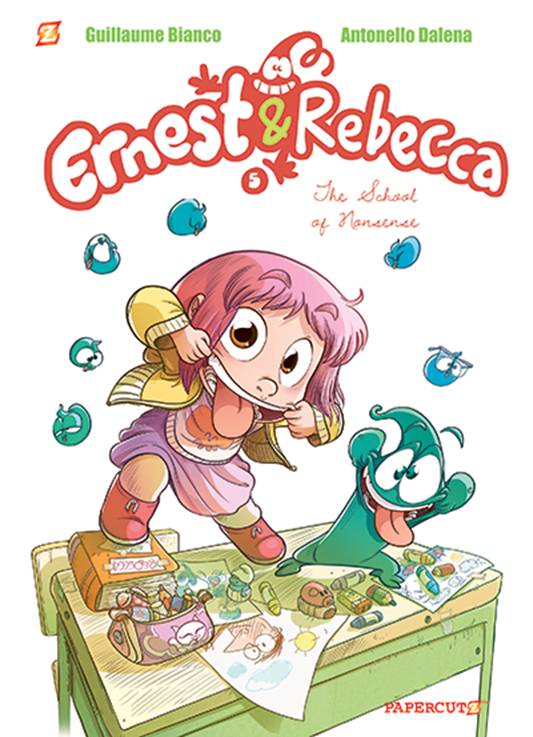 In one of these Ernest & Rebecca graphic novels I both laughed out loud at a sequence and later, at a different sequence, burst into tears. It’s rare that I’m so moved by a comic book like that. Great characters, great stories, great art—what more could anyone ask for?

Jim Salicrup will be at East Coast Comicon at the Meadowlands Expo Center in N.J. Come meet him! Click here for tickets!