Did You Know it’s MONOMYTH Monday?

Monomyth is the new book by writer Siike Donnelly and artist Eric Ninaltowski, from the up-and-coming OSSM Comics. It’s a little tale that only deals with conflict of massive, biblical proportions. Here’s a MIGHTY Q&A with Siike, as well as some EXCLUSIVE interior art by Ninaltowski. The miniseries will debut in July. 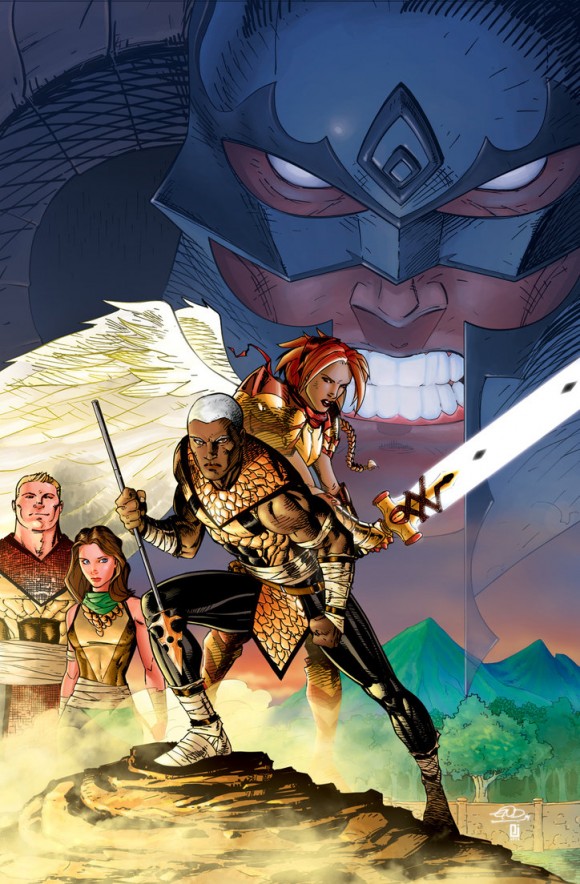 Siike Donnelly: The birth of Monomyth was simply me wanting to write something familiar to most people, but putting a twist on it. The basic plot revolves around the question, “What if Lucifer saved mankind and Michael was the archangel that fell from Heaven?” That’s where this all started, which then leads to Adam and Eve NOT eating the apple. From there, everything changes.

Most people know the stories in the Bible, so I decided to use that knowledge as my “Krypton exploding.” Everyone knows Superman’s planet exploded and that it’s part of his origin. I figured I need that here so that most people would respond to it right away.

Reading “What If?” comics from Marvel as a kid is where this idea’s seed was probably planted, though. It just took 23 years to grow into the final concept. I don’t know why or when, but suddenly I shifted from writing a story about dragons and gargoyles to writing a huge, biblical-scale story, with themes from Zardoz, Gilgamesh and Hercules. I’m gonna blame Dan Harmon and Harmontown for that one. I think Zardoz and Joseph Campbell were mentioned on that podcast around the time I was writing this, so those concepts seeped in. 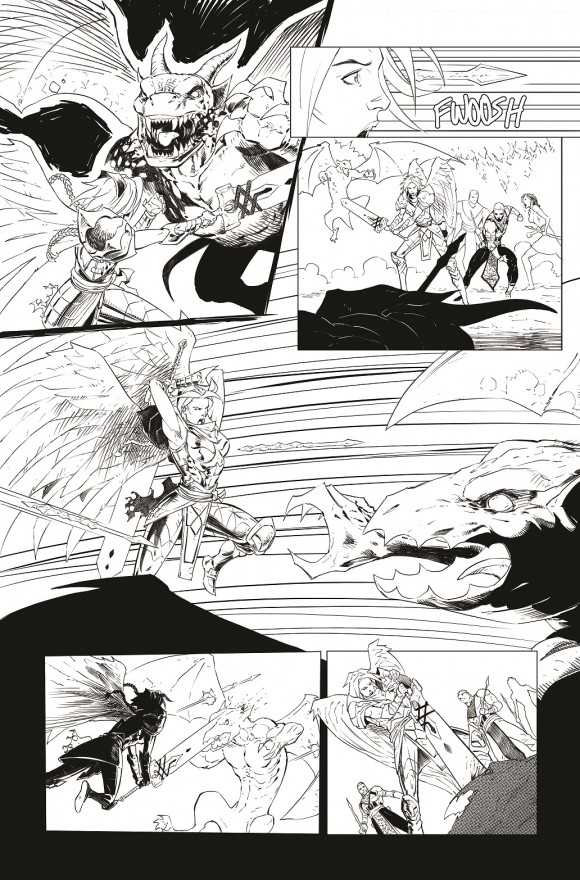 Walk us through the basic plotline.

In Monomyth, humanity is far different, superior in a lot of ways. We’re peaceful, calm, always meditating and able to tap into our own souls, using them to build and create. That is, until Enoch comes along. Enoch’s like most teenagers nowadays, or like I was when I was a teenager; he hates authority, he’s angry, finds peace to be boring, thinks he knows everything, and because of these negative emotions, he’s violent, which the people of Eden have never seen before. Just when Enoch’s about to get exiled, Michael and his forces gather, ready to wipe Eden from existence, putting Enoch in the position of savior, which naturally, he struggles with. 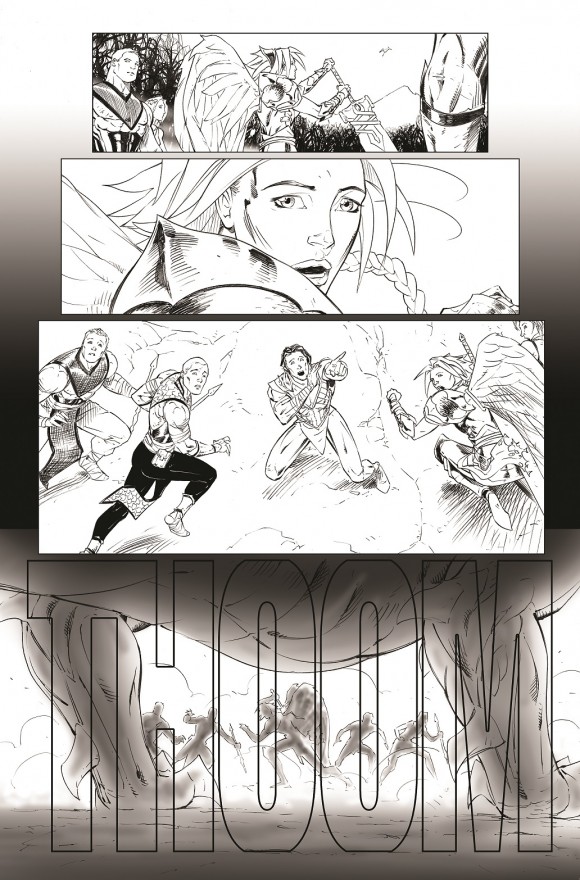 How steeped are you in biblical knowledge and classic myth? How much research did you feel you needed to do?

I’m Catholic and have read the Bible a few times now; four times I think. I’ve also recently re-read the Book of Enoch before diving into this story. I’m a big fan of Jesus Christ Superstar, for what that’s worth. Those songs are amazing.

My mom told me that when I was a kid, I used to build little forts, crawl into them with a Bible, prose novel, or a comic, and just read. I’m certainly not an expert, nor would ever claim to be, when it comes to religion, theology, prayer, or basic biblical knowledge, but I do find it all very interesting from a storytelling perspective. There’s literally something in it for everyone.

Even though I did a fair share of research, at the end of the day, it’s my job to tell the best story I can. I never felt that I HAD to do something one way or another; just what was right for the story. I’m steeped enough to know not to cross too many lines. In fact, once you get over the hump of Lucifer being the hero and Michael being the villain, it’s pretty smooth sailing from there. At least, to me. 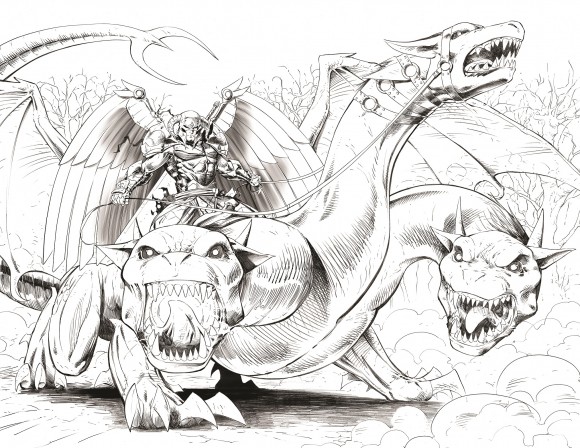 Tell us about the collaborative process with Eric Ninaltowski.

It’s amazing! I can’t say enough good things about Eric’s perspective and his talents. As I’m not religious in any way these days, Eric’s been great as he’s not only an immensely talented artist, but he’s also Christian. He’ll tell me if he thinks we push something too far, but luckily we haven’t had that problem. He’s open to what we are doing and he digs it a lot. Once he became a fan of the script, I knew we’d be great.

The big thing is I don’t have my visual memory, due to an aneurysm rupture a few years back, so Eric sends me thumbnails of each page for me to choose from. Once I pick one and we talk it out a bit, he gets to work. It’s very collaborative and I think that’s the ONLY way this book is going to work. We communicate every day and I love it very much. I’m very lucky to have him, and on my first comic book too. The bar has been set … very high.

What readers should seek this out?

People who’ve read and liked Mike Carey’s Lucifer, Humberto Ramos’ Crimson, or watch the show “Supernatural” (which was a big inspiration) should definitely pick this book up in July. I pull a bit from those books, but also stuff like Dante’s Inferno, Gilgamesh, Hercules, Zardoz, and even Final Fantasy. If you have played or hung out in any of those universes, you’ll be right at home with Monomyth. 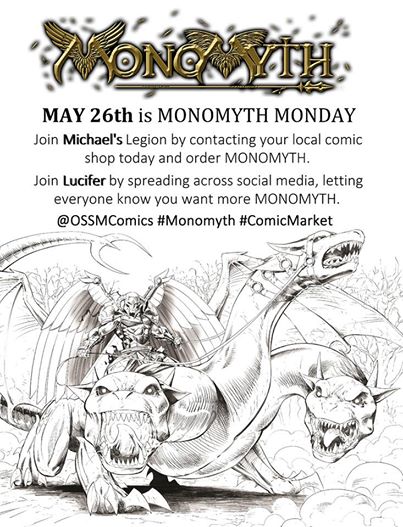