DEATHSTROKE #1: TONY DANIEL Takes You Behind the Deadly Scenes

Home » DEATHSTROKE #1: TONY DANIEL Takes You Behind the Deadly Scenes

Our old friend Clay N. Ferno was able to grab some time with Deathstroke‘s new writer and artist, Tony S. Daniel, at NYCC for this MIGHTY Q&A. Issue #1 is out 10/22, from DC. 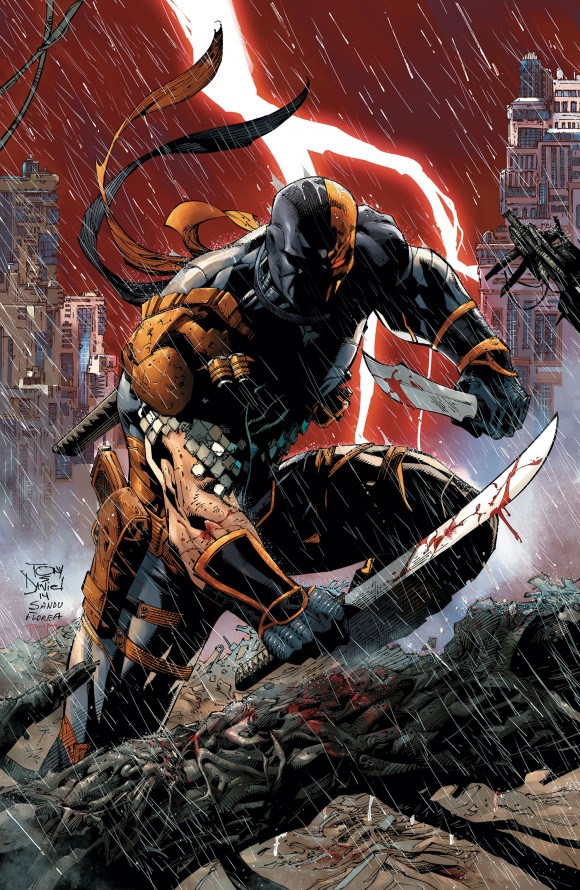 Clay N. Ferno: I’ve been a huge fan of yours since Battle for The Cowl, how did you become one of the rare writer/artists as opposed to just drawing?

Tony S. Daniel: Going back to the ’90s actually, I was doing a creator-owned book called The Tenth. That’s where I started getting my desire to start writing. I didn’t set out to write the book to begin with. I was working with Beau Smith as the writer. As the series went on, I wanted to get more and more involved with the story itself. Eventually, I just flew with it. I learned that I really enjoy writing. After that, I wrote a few other series (such) as the creator-owned Image series, Silke, Adrenaline, F-5.

When I came to DC in the early 2000s, 2004, they asked me if I was interested in writing anything. At the time I said “No, I really just want to focus on the art right now,” and it didn’t really come into play until years l later when the opportunity for Battle for the Cowl came in. Then I decided, “Hey, think that’s something I might want to do.” 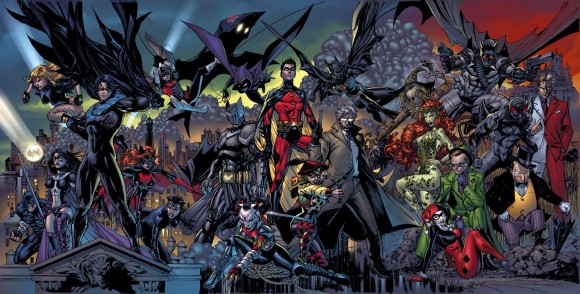 I really didn’t know where it was going to go after that, but it was well received, DC liked it.

It was a really rich story, there was a lot to it, and writing the story and doing the art, that isn’t something just anyone can do. I think of Walt Simonsson as a great example. Do you have a big influence as far as writer/artists are concerned?

I’m proud to be able to do it, the thing with me is that I LOVE to do it. I spent a few years learning how to do screenplays and to screenwrite. I was learning a lot through books that I was reading on how to write screenplays and all that stuff and that really came in handy when I started writing again. I was able to use what I learned as far as story structure and characters and how to dialogue interesting characters, unforgettable characters became handy on my comic book writing.

It’s not like I jumped into it blindly, I came in with rules for myself that I had learned about story structure and story telling and character development. 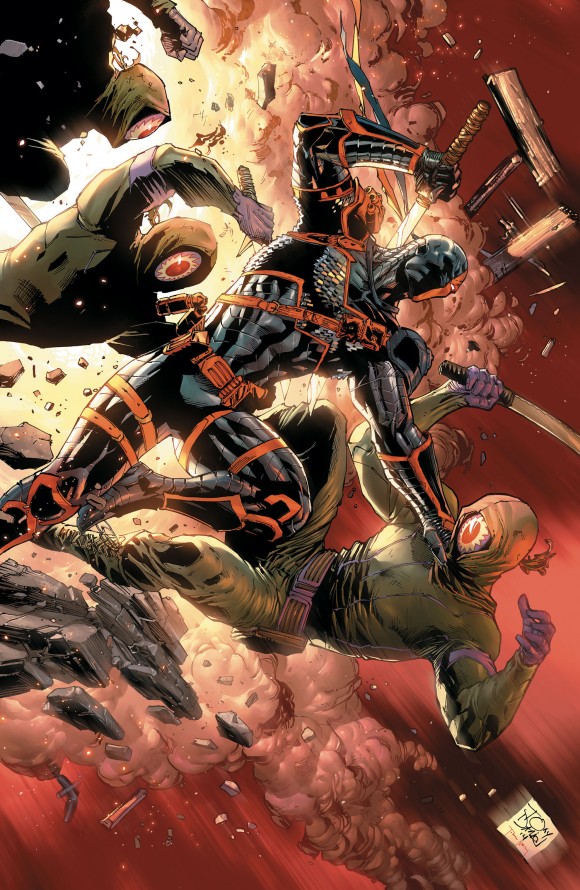 What appeals to you about writing a character like Deathstroke?

He’s considered, by many, a bad guy, he kills people, he operates on the other side of the law. I find that very appealing about the character. It makes him very interesting to me, having a character who has a different kind of moral compass than say, Batman or Superman. He does things that they would never do and they’d love to lock him up for.

I think that makes him a little more complex. To get into his mind and see what he thinks and how he feels about what he does. That forces me to write a character from a different point of view. I really like being able to get into a character’s head like that and challenge myself to think like someone like he would think. 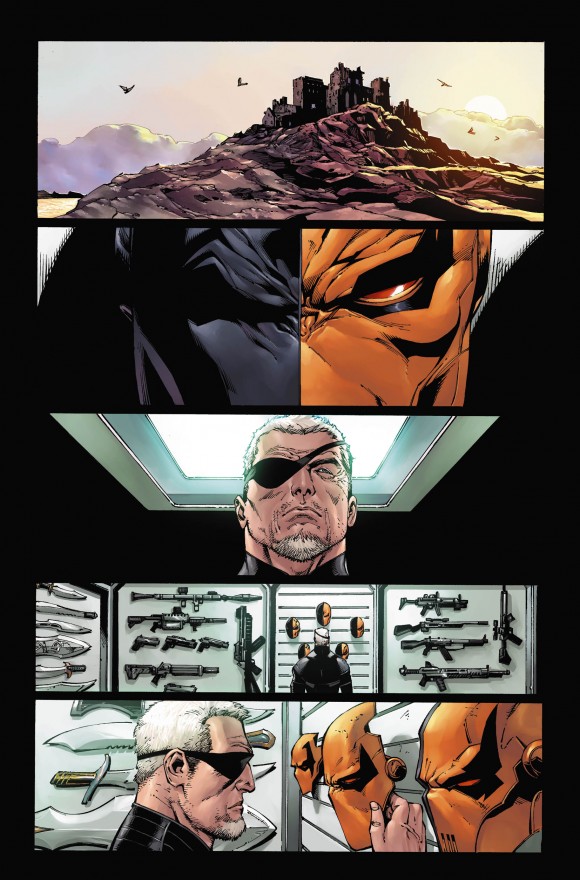 Can you tell us about your inspiration for the character design that you came up with?

I went back to something a little more sleeker, closer to a modern version of his traditional outfit. He doesn’t have a bunch of armor all over him, but what I plan to do is modify his outfit at time for different missions. That will be fun having him wear different kinds of battle gear depending on who he is fighting or what he is up against. I think that’s a natural progression for his look. He shouldn’t have one solid uniform that he wears every day. I think he should switch it up here and there. 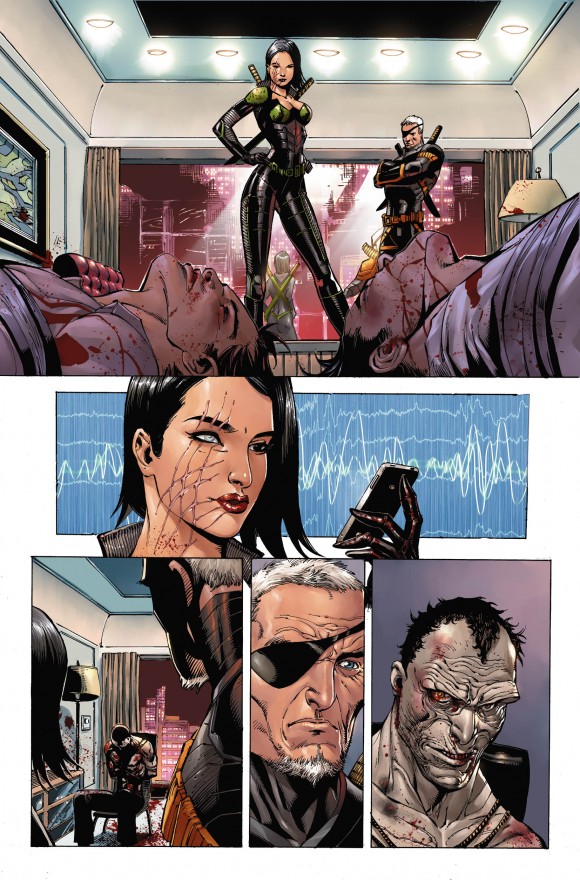 Can you tease who is the main foil here for Deathstroke? Is it Green Arrow? Is he going after the good guys, or going after the bad guys? What kind of missions will he go on?

He’s a man on a mission. In the first arc, he’s trying to find out about things that he agreed to and they erased from his mind. He goes up against a new bad guy named Odysseus.

Odysseus will be a major, major villain in the DC Universe. I had big plans for Odysseus to branch out and be so powerful that even the Justice League is going to want to take him on, so he’s going to be a very powerful bad guy that I’m creating in the story arc. He’s going to cross paths with characters that we know, possibly from Gotham City, possibly Justice League characters. There are other characters but that’s … a couple of arcs away. The trajectory of the series is going to get bigger and bigger like a snowball going down the mountain that is going to crash into everything!