Comics artist and illustrator Danny Hellman has been a fixture in the NY Press and other weeklies for decades. This week his art adorns the CBGB Festival banners and ads all over NYC.

I caught up with Danny Hellman and asked him about his CBGB Festival art and his career.

I saw some art that was unmistakably yours on some banners in Manhattan. How’d you score that gig? 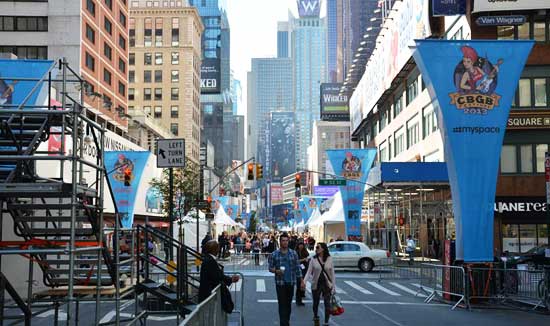 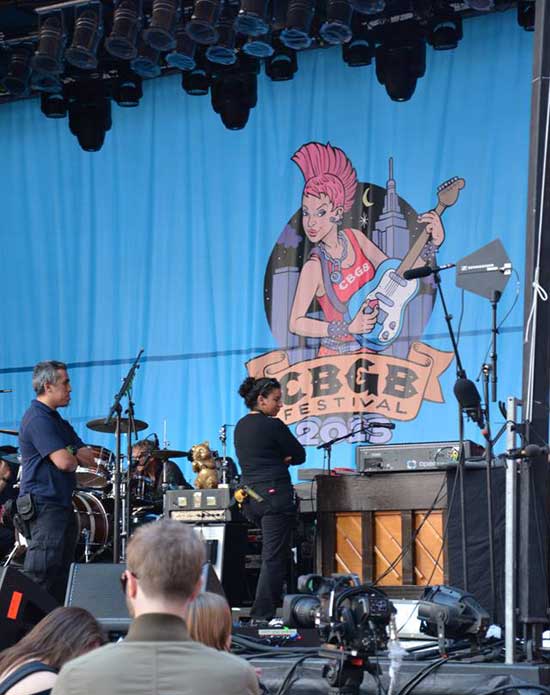 This is the second year I’ve done graphic identity for the show. I’d done various flyers for bands that played at CBs in the years prior to the club’s closing. 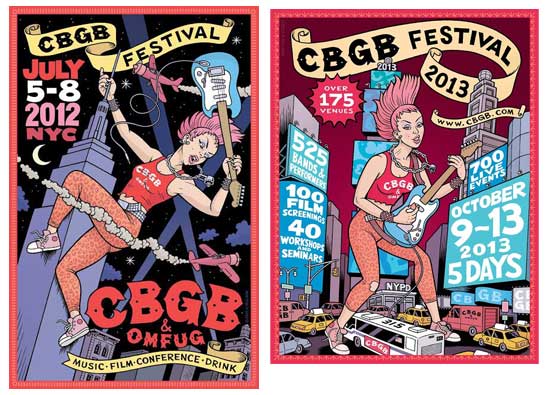 Electric Frankenstein was for one of the “Save CBs” benefits that happened right before the club closed. I don’t know which year it happened, but the CBGB brand was eventually bought by Tim Hayes and some partners. These are the folks who do the CBGBs Festival. Tim got in touch with me early in 2012 about doing art for the festival. 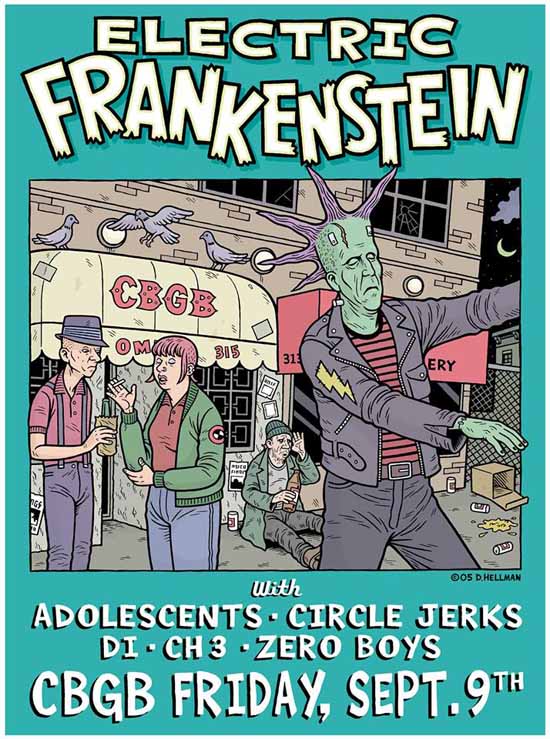 They were looking around on the web for art, and came across the drawing of a punk Frankenstein leaving CBGBs. That’s what prompted Tim to get in touch with me. Some folks are horrified by the thought of the CBGB brand being resurrected and turned into a big, commercial music festival. I’m not one of those. I’m happy to see the brand live on. I think anybody who’s making an effort to bring culture to an increasingly culture-bankrupt NYC is doing the Lord’s work, and I’m thrilled to be associated with them (especially when they pay me).

Let me ask you about NY Comic Con — I see you at cons, I think we met at MoCCA Fest years ago. I didn’t see you at NYCC.

I’ve been to NYCC a couple of times in recent years, but I don’t have fun at NYCC. Too big, too mainstream. Too much Hollywood and video-game pizzazz. The artsy alt-comics stuff that I’m interested in gets lost in the sauce. And I’m just not crazy about crowds in general. After a few minutes walking around in that crowd, I get squirrely.

So a show like the MoCCA Fest, SPX, APE, or Brooklyn Comics and Arts Fest is more to your liking?

I’ve enjoyed SPX and APE in the past, but thanks to the recession, I’ve had to give up on doing shows that heap hotel stays and travel expenses on top of already-expensive table rates. For the foreseeable future, I’ll be sticking with shows that are close to NYC.

I thought the last MoCCA show was great, and that the Society of Illustrators improved on what had been done in previous years.

I start off with a rough sketch on white drawing paper. Once the sketch has been approved, I trace it backwards onto a sheet of Denril drafting vellum, then I flip it again and ink it with rapidographs. An insane process.

I started using it for color separations at Screw (magazine). Hated cutting rubylith, preferred doing my seps in ink on Denril

I do. Although I think there’s something about drawing with rapidographs that slows you down. Rapidorgraphs force you to draw slowly and methodically, or you break them.

It’s a tool that makes me feel like a tool.

Ha!!! And cleaning them?

If you’ve got an ultrasonic cleaner, it takes away 75% of the rapidograph-cleaning headaches. Once a month or so, I just dump all my pens in the cleaner, zap ’em for a few hours, and let em soak.

I do have an ultrasonic cleaner. I still don’t like cleaning them.

I used to draw with Japanese brush-pens years ago, and I was much faster. But as the years went by, I demanded more precision, ever more precision.

I look at your stuff sometimes and I think, he’s doing this in Adobe Illustrator.

I don’t even know how to use Illustrator. It scares me.

I use it as little as possible. It’s not very intuitive.

I guess Illustrator’s gotten slighty more intuitive, because the last time I had to use it, I didn’t immediately want to kill myself.

Well, Adobe should use that quote on all their marketing materials. And then when you’re done inking, then what happens? Coloring?

Photoshop. I haven’t colored anything traditionally since the mid 90s.

Your coloring style many times takes on a much happier look than the dark subject matter in the art– is this intentional? 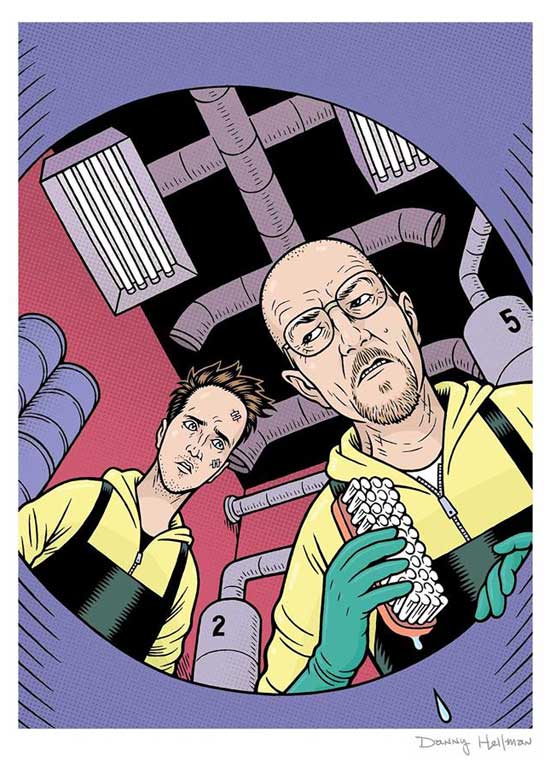 I try to match my colors to the mood of whatever I’m drawing. When I’m doing an illo, I try to keep it as bright and colorful as possible, because that’s what they tend to like. Personally, I like colors that are darker and more subdued.

Who are you doing illustrations for these days? Like over the past few years?

That’s it for these last few years. My client list used to be a lot more impressive before the recession. Lotta mags I used to work for don’t exist anymore.

Still — impressive. Don’t you do stuff for New York Mag?

Used to, years ago. I don’t get nearly as much slick mag illo work as I used to.

Speaking of years ago, was Screw Magazine your best gig? Most fun?

Screw and NY Press were definitely the most fun I’ve had illustrating, mainly because of the freedom, but also because both mags were staffed with some of the coolest folks I’ve ever met. Met my wife Linda at NY Press in the mid ’90s. 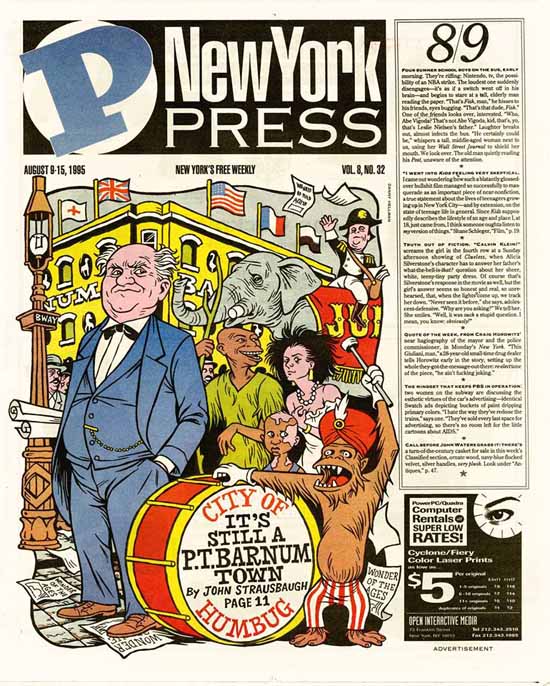 Screw was great because art director Kevin Hein is a huge comics fan, and was really receptive to a wide range of stuff. Screw was a weekly, which meant that they were always on the lookout for stuff to fill the pages in between the nasty hooker ads. 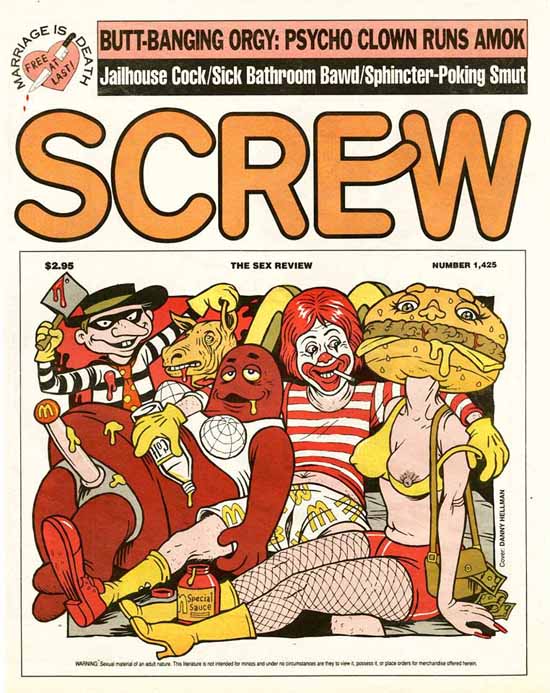 Where has that spirit of publishing gone?

What about the NY Press

NY Press was a little different, in that it wasn’t going after a dirtbag audience with the laser-like focus of an Al Goldstein. NY Press was run by publisher Russ Smith and editor John Strausbaugh. They were interested in finding talented people to fill their pages for very little money, and they were pretty successful at it. They would find promising young writers and promising young illustrators, and let them cut loose.

And they started to kick the shit outta the Village Voice?

Yeah, by the early 90s, the Voice was lost in the weeds.

So the NY Press was winning, what happened?

The Voice had gone through various ownerships, many of the writers who’d made the paper great had left, and the paper’s identity was getting vague.

So what happened to NY Press?

9/11. Russ Smith lived in Tribeca, and the WTC fell down a few feet from his condo. I think he was already thinking about selling NY Press, but 9/11 sped up the process. I think he could see the writing on the wall that the alt-weekly papers were looking at tough times ahead. And he got out while the getting was good.

Because the Internet would wipe out so much of print?

Since 2008 I’ve been working on a LONG graphic novel called “Resurrection Perverts.”

Then that will be part 2 of this interview.

Danny Hellman’s work can be found at www.dannyhellman.com