“Eventually everything knits together.” 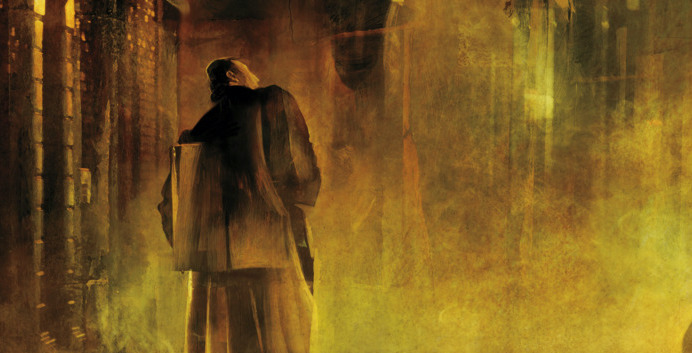 Dave McKean is one of the most revolutionary creators ever to hit the comics scene but he’s so much more.

Chloe Maveal, the culture editor of online publishing start-up NeoText, had the chance to talk to the prolific artist about his career in and beyond the pages. 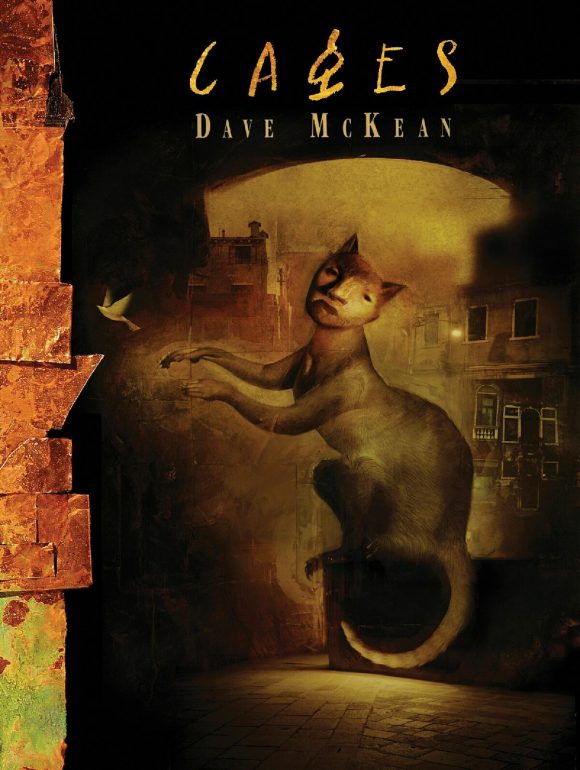 In my late teens, I was lucky enough to discover Cages by Dave McKean. I was already a fan of his work — like many other crazed readers of a certain age, I had fallen in love with his covers for Neil Gaiman’s Sandman comic series from DC’s Vertigo imprint — but Cages was something entirely different.

A combination of character building and artfully told flights of fancy, Cages chronicles the intersecting lives of a writer, a painter, and a musician all living in the same apartment complex, ultimately coming together to form a cohesive story about creation, cats, creativity, and the cages that we as humans build ourselves into. It was something undefinable by genre, existential, and full of movement; like a comic medium version of jazz, there was a freedom there that allowed McKean to explore various ways in which comics could tell a story.

From there, it became an unofficial mission of mine to explore McKean as an artist in as many ways as I could get my hands on. The funny thing is that, in the years since I discovered Cages and made that promise to stay current with McKean’s work, his career has shifted and evolved so constantly, so intensely, that I haven’t been able to keep up. Perhaps that shouldn’t come as much of a surprise to anyone, though. If nothing else, his rapid evolution and continued creative restlessness is the proof that complacency — or even creative comfort — is not really McKean’s bag in any way, shape, or medium… a subject that came up when, in an email exchange with him recently, he said that he wasn’t entirely happy being referred to by the term “artist.” 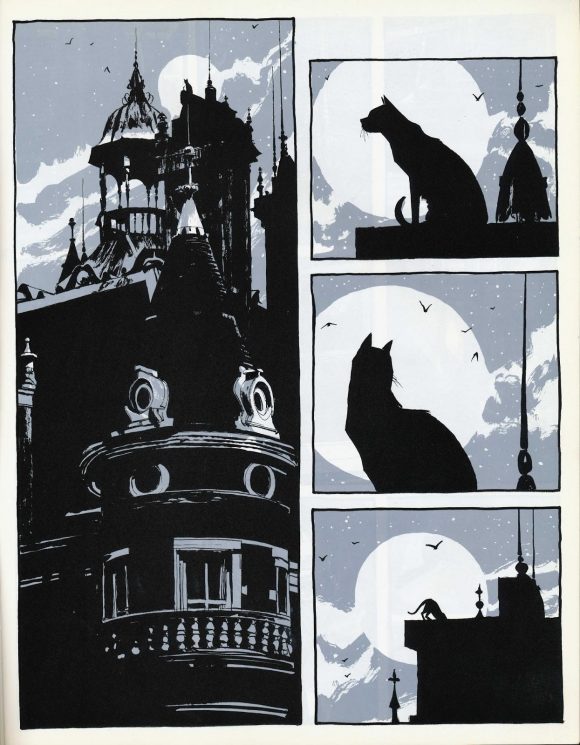 “I try and avoid ‘artist’ as I think that’s one of those words, like celebrity and genius, that’s lost its meaning,” he said, in response to the suggestion. “I do a few different things; illustration, writing, design, photography, filmmaking, music and composition. The Italians have a word ‘creativo’ which covers all these but we don’t have an equivalent in English. ‘Storyteller’ is quite a good one as nearly all my work is involved with storytelling and narrative. But then, with certain people, and with the opportunity to define my terms, I do sometimes end up using ‘artist’. You can’t win.”

Even the greatest creativo has a beginning, and, for McKean, that was attending Berkshire College of Art and Design in Reading, England. Unusually — but, perhaps, foreshadowing his later career — he was still in school when he got his start professionally, creating illustrations for local publications. In his final year of art school, he met Gaiman, the writer he remains most commonly linked with despite, as he points out, “the last thing we did together was MirrorMask and that was 15 years ago.”

The two shared an interest in comics and an admiration for each other’s abilities — Gaiman, then a young journalist, once described the young McKean in an essay as “quite obviously the most artistically talented person I had ever encountered” — making the prospect of collaboration an exciting one for both of them. When Paul Gravett, editor of Escape — a British indie comics anthology of the period — suggested that they create something for the magazine, they returned with a 64-page fever dream titled Violent Cases that, published as a standalone graphic novel, was immediately greeted with acclaim and excitement. Their relationship went skyward as a result, leading to McKean’s illustrative work with Gaiman on books such as Black Orchid, and — of course — The Sandman, which launched in early 1989. 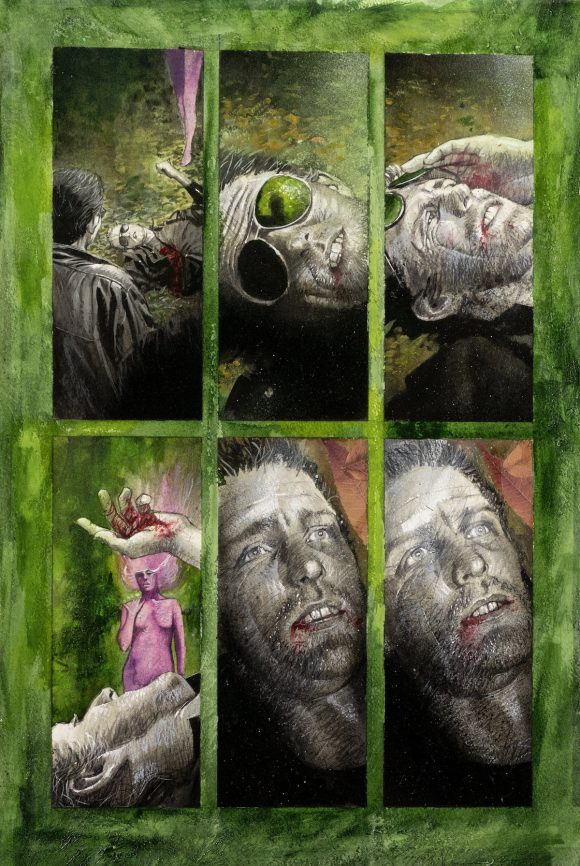 McKean served as the cover artist for the entire 75-issue run of Sandman, constantly recreating the visual aesthetic of the series on shelves in the process. In what seems like a point of pride for him, this period saw a shift in the way he created his work, moving from predominantly paint with the occasional Joseph Cornell-inspired shadow box, including found material, to an ever-evolving mix of media: paint, pencil, photography, and — thanks to the emerging technology of the time — digital image manipulation, with McKean treating the covers as much as visual diary or exploratory canvas as static images intended to sell the contents of any individual issue. When asked about this period and how it affected him when it comes to embracing new ways of creating, McKean was quick to admit that he remains fascinatingly restless.

“I love to learn new things, new skills, new ways of working,” he said. “I paint rarely these days, only when the subject really needs the texture and abstraction of the sort of painting I like. I like just drawing with pencil, I’ve done several books with pencil recently. I still like playing with digital imagery, but not so much — and again — only when it’s really necessary.”

McKean would continue to collaborate with Gaiman for a number of years following the 1996 conclusion of Sandman — their joint output including The Tragical Comedy or Comical Tragedy of Mr. Punch, Coraline, The Graveyard Book, The Day I Swapped My Dad for Two Goldfish, The Wolves in the Walls and several more — while also building a catalog of comics work with other writers, including Grant Morrison’s 1989 graphic novel Arkham Asylum: A Serious House on Serious Earth (which remains one of the most successfully selling graphic novels in history), as well as cover artwork for other DC projects including The Dreaming, Hellblazer and more. 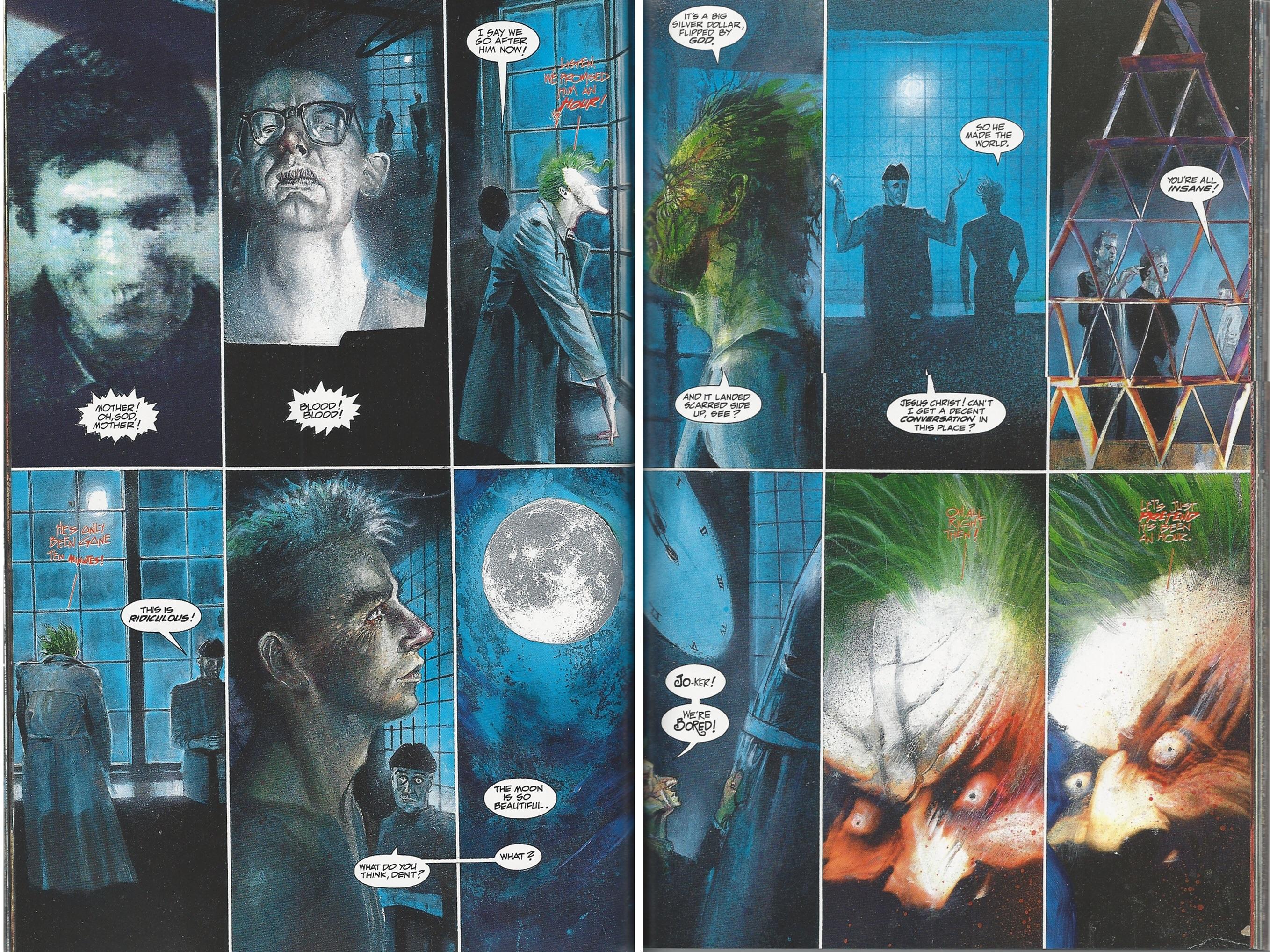 He worked outside of comics, as well, in unexpected arenas; he collaborated with musician John Cale on the latter’s autobiography What’s Welsh for Zen, and with chef and self-proclaimed “molecular gastronomist” Heston Blumethal on The Fat Duck Cookbook and Historical Heston. (His collaborations with Blumenthal extended to creating designs and illustrations for the chef’s restaurants, where he was named the official “director of story.”) He worked with multiple writers, including on Richard Dawkins’ children’s books and Ray Bradbury’s The Homecoming.

“It’s a good challenge to work with someone new, from a field I’m unfamiliar with, so I get to spend time in their heads, in a different world,” he said when discussing what he looks for from any potential collaboration. “I like working with people who don’t usually work with illustrators, so they have no preconceptions. I also like to work with people who are open to new ideas.”

As McKean’s fame continued to grow, so did the opportunity to break new creative ground. He designed and illustrated stamps for the Royal Mail, and wrote and performed both live theater and film, with his first feature MirrorMask — arriving in 2005.

“I had made two short films [by that point], so I had a way of working that created moving images that had the feel of my 2D artwork,” he remembered, when asked about the process of making the movie. “MirrorMask was a much larger undertaking, and I had to collaborate with 17 young animators and programmers, but they were great to work with. Even though for most of them it was their first professional work, and the budget was tiny, they all added elements to my storyboards, and rose to the challenge.”

Although many expected McKean to move more fully into film, he’s remained as mercurial as ever, directing only two more features in the 15 years since. (2012’s The Gospel of Us, starring Michael Sheen, and 2014’s Luna, which he also wrote.) He describes his relationship with performance art, whether on stage or screen, as being different from how he works with static pieces, and has “to do with the nature of collaboration and the interaction with a world that sometimes refuses to be controlled.”

“For an illustration or a comic book story, I can control absolutely everything if I want to,” he explained. “To expect that level of control in film is unrealistic, so either you end up fighting circumstance and getting frustrated, or you roll with it and treat it all as an ongoing conversation towards whatever the final thing will be. If you choose the latter path, hopefully you’ll get the best out of collaboration, the end will be greater than the sum of the parts.” 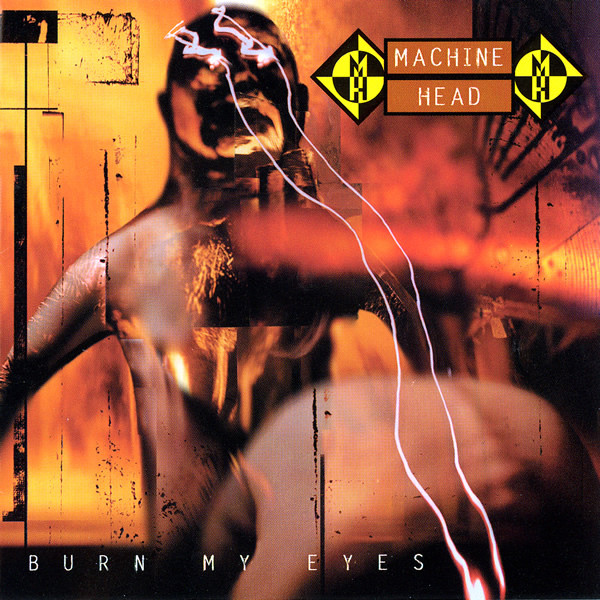 Some of McKean’s contributions to the music world have been covers for industrial and rock groups such as Skinny Puppy (Brap: Back and Forth Series 3 & 4 and Doomsday), Frontline Assembly (Implode, Reclamation and Artificial Soldier), Stabbing Westward (Darkest Days), and Machine Head (Burn My Eyes). But he’s also branched off into artists such as Tori Amos, Counting Crows and — most markedly — Bill Bruford and Iain Ballamy. When asked what the requirements were to work with such a varied group of artists over the years, McKean was happy to report that — for the most part — he’s been given free rein since day one.

“They are all very different. I’ve done lots of album covers for Bill Bruford and Iain Ballamy, with not a word of a brief from either, they are happy to just see what I do,” he said. “It’s a large body of work now — nearly 200 albums — so it is a significant part of my life. Some bands offer rough outlines, images they like, or the music of course. All suggest starting points. But I was very happy to make those covers, and most of the bands and musicians I worked with were very open. And music is very important to me. I play every day, and love to work to music. When I was in art school, the two things I really wanted to do was write and draw comics, and illustrate album covers, so I’m very lucky to have spent so much of my time doing exactly those two things.”

Jazz musician. Album artist. Stamp artist. Children’s illustrator. Painter. Photographer. Playwright. Director. Storyteller. There’s any number of things that one can call Dave McKean when it comes to his creations. 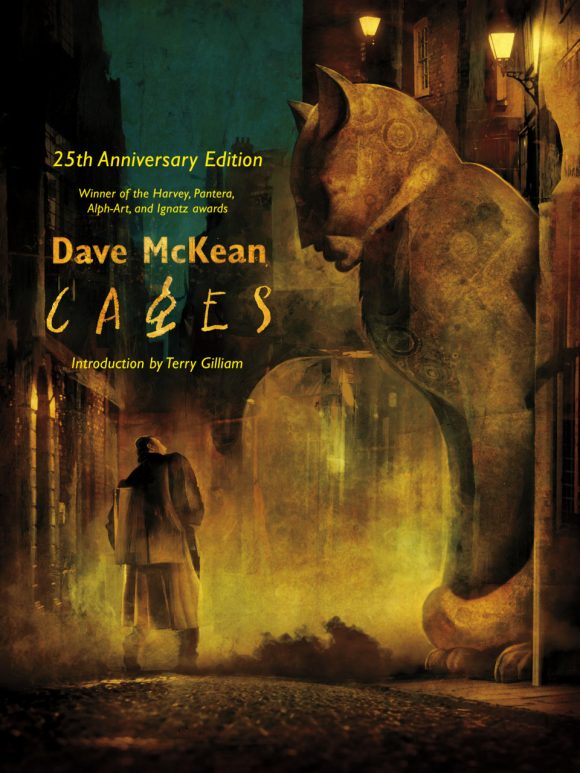 But still, somewhere in my head, I was stuck in my curiosity about Cages and what question I could possibly ask that would sate my nearly two-decade-long fascination with the hefty collection. In the end, after having exhausted the rest of his career and being dumbstruck by the sheer breadth of accomplishment, I decided to stay simple, and it turns out that McKean seems to still feel the same way about Cages that I do all these years later.

“I’m still very happy with it. There was a moment when an animation company wanted to develop it as a feature film, so I revisited it for that form and only found a couple of things to change. The basic structure is still quite solid, I think. I like that there are stories within the whole [which at that] moment feel disconnected when you come upon them, but eventually everything knits together.”