EXCLUSIVE: One of comics’ top cover artists explains his process on American Gods… 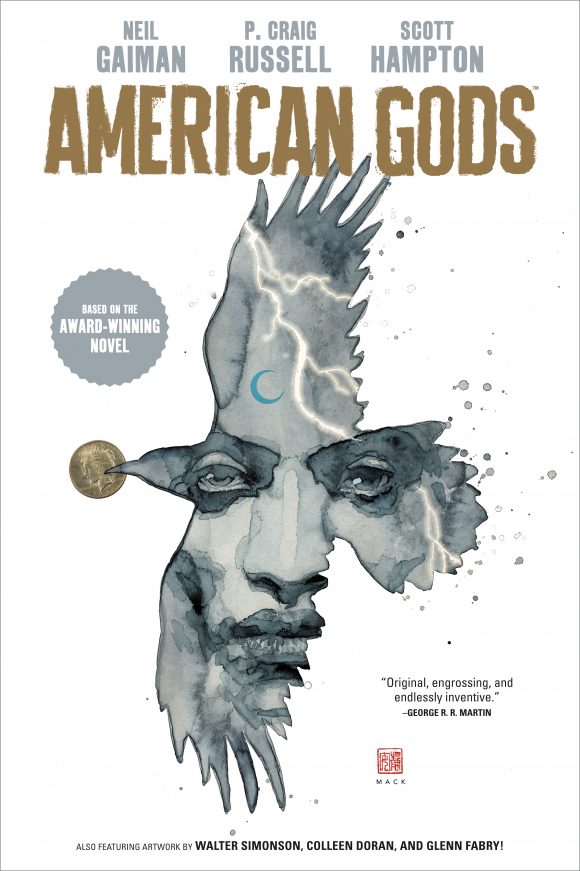 One of the most prestigious comics projects of the last year has been the adaptation of Neil Gaiman’s American Gods, by Gaiman, P. Craig Russell and Scott Hampton.

So it only goes to follow that one of the industry’s most prestigious cover artists would handle the variants for the series: David Mack. (Another top talent, Glenn Fabry, handled the main covers.)

The hardcover collection of the first series, the nine-part Shadows, is now available from Dark Horse — and Mack is here to explain his process in creating his monthly masterpieces. Naturally, there are SPOILERS:

1. Shadow. For this cover, I wanted to have a few overlapping central images that crystalized the theme of this story. In Shadow’s cell his calendar has a bird on it. I see that bird as representing time and freedom. I also see the bird shape as representing Mr. Wednesday’s ravens. So it is Shadow’s gaze staring into time and freedom, inside the outlines of Mr. Wednesday’s designs for him, on the cusp of his new adventure. The lightning signifying the storm in which Shadow first meets Mr. Wednesday in the clouds. And the coin in the bird’s mouth, being the coin in the story.

I always want the shape of a cover to distinguish itself from all of the other covers/images on the shelf (or what you see next to it online). I don’t just think about what is in the cover rectangle, but also how it catches the eye of the reader in an un-ignorable way from a distance, especially in terms of contrasting from what else is around it. 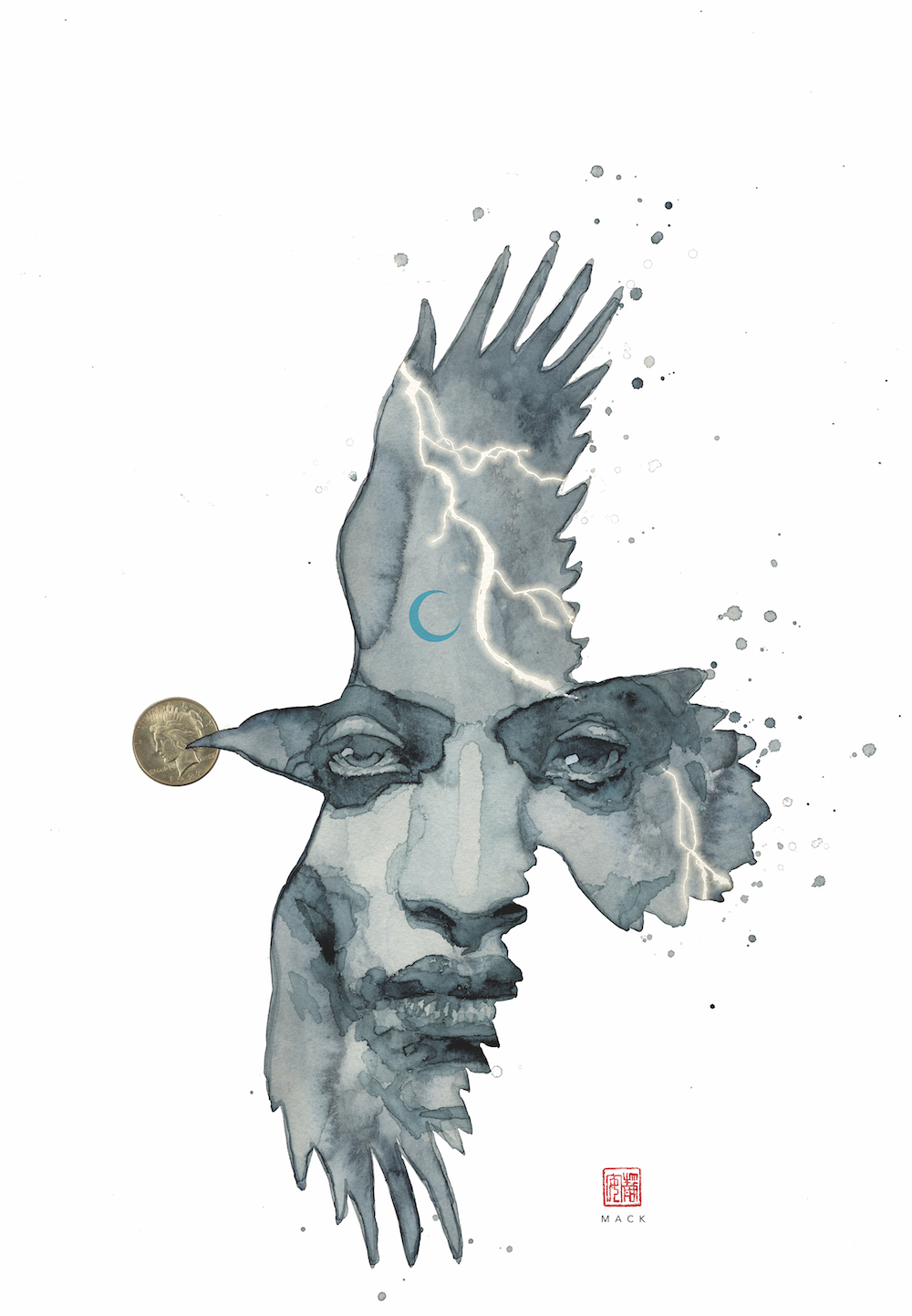 2. Mr. Wednesday. I wanted this to be the Wednesday in the story, but also the timeless Odin of myth and legend. I incorporated Norse symbology linked to Odin and included his ravens, Thought and Memory, (Huginn and Muninn). 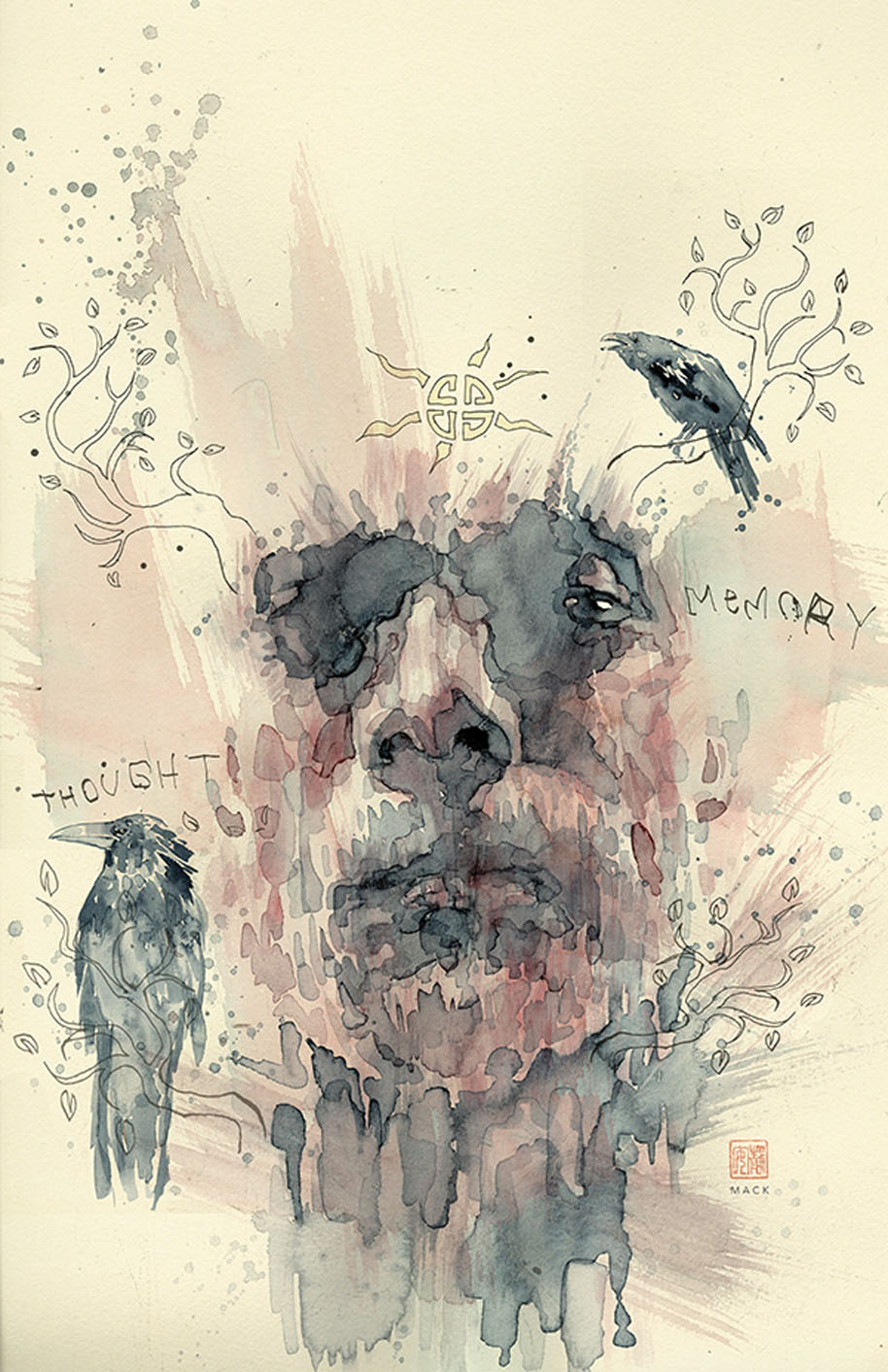 3. Mad Sweeney. This is Mad Sweeney’s coin trick, in which he pulls the gold coin out of his mind, out of thin air, and presents it in his hand. I wanted the shape of the design to express that, while simutaneously showing the current Mad Sweeney and alluding to his mythology. A real-life actual four-leaf clover is included. I imagine it adds some luck & magic to the image that is passed on to the readers. 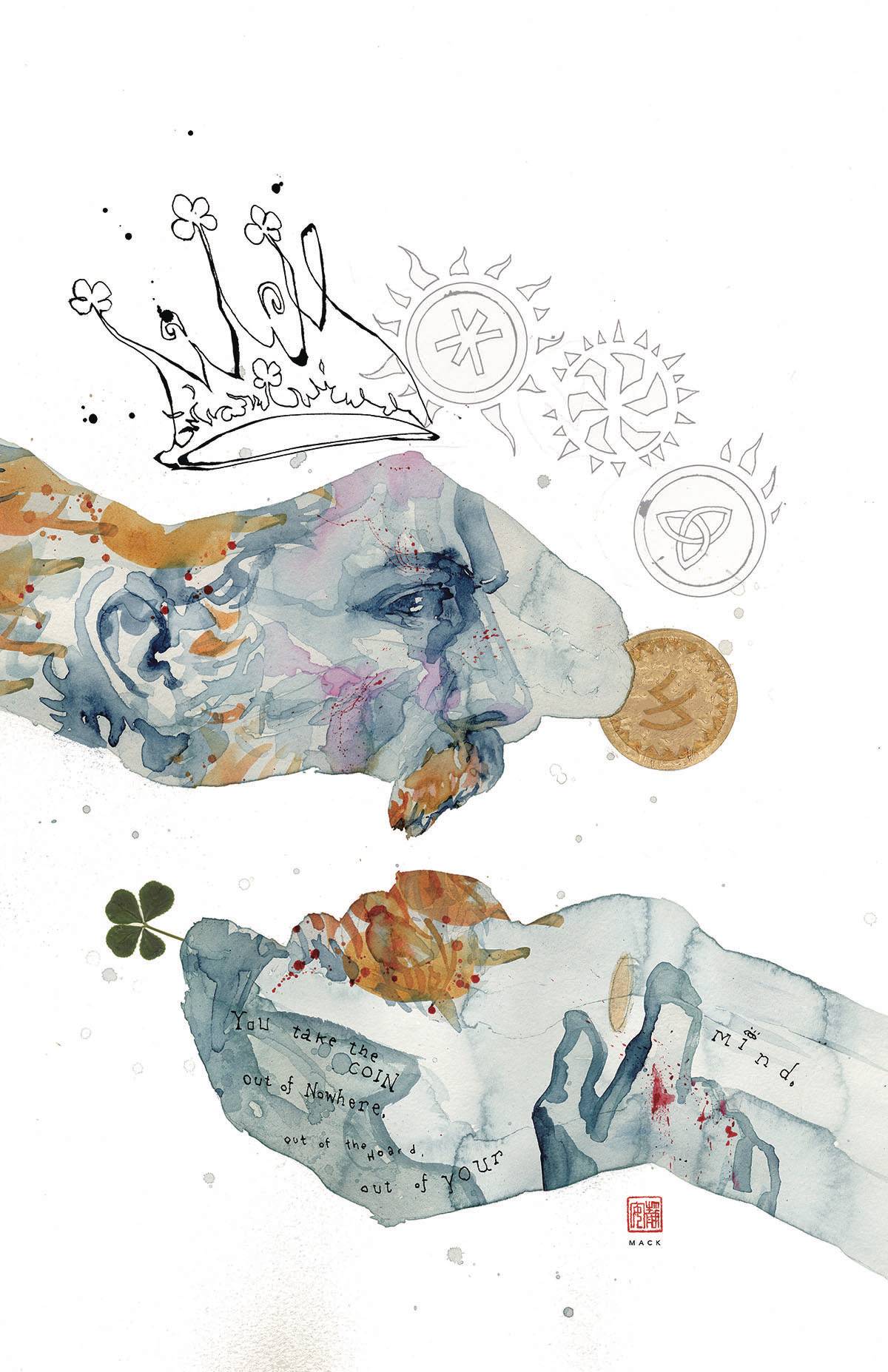 4. The Midnight Zorya sister holding the moon, before she presents it to Shadow in the form of the silver coin. I painted the figure in translucent tones for a moonlight effect, and I added rips of acrylic painting around her to suggest the starry heavens. 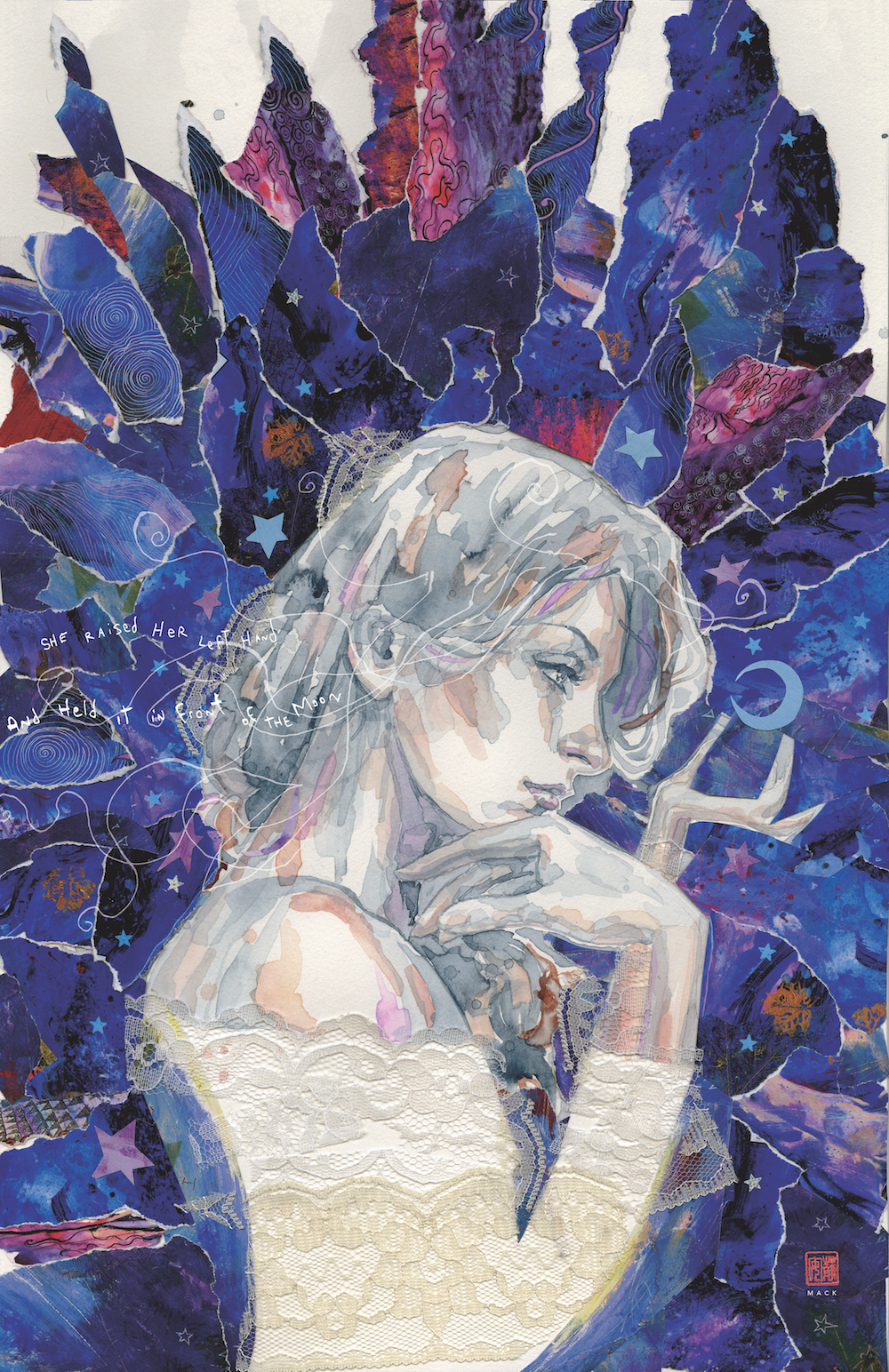 5. Mr. Nancy riding the Lion of the carousel. The shadow of the eight-limbed spider beneath him. Eight limbs between his figure and the lion he rides (including some multiple arms). Mr. Nancy in the foreground is the version of himself that he presents in this story. The version in the background (with the red-striped face) is the younger version of him alluded to in the story. I enjoyed the pen-work lines of the lion. 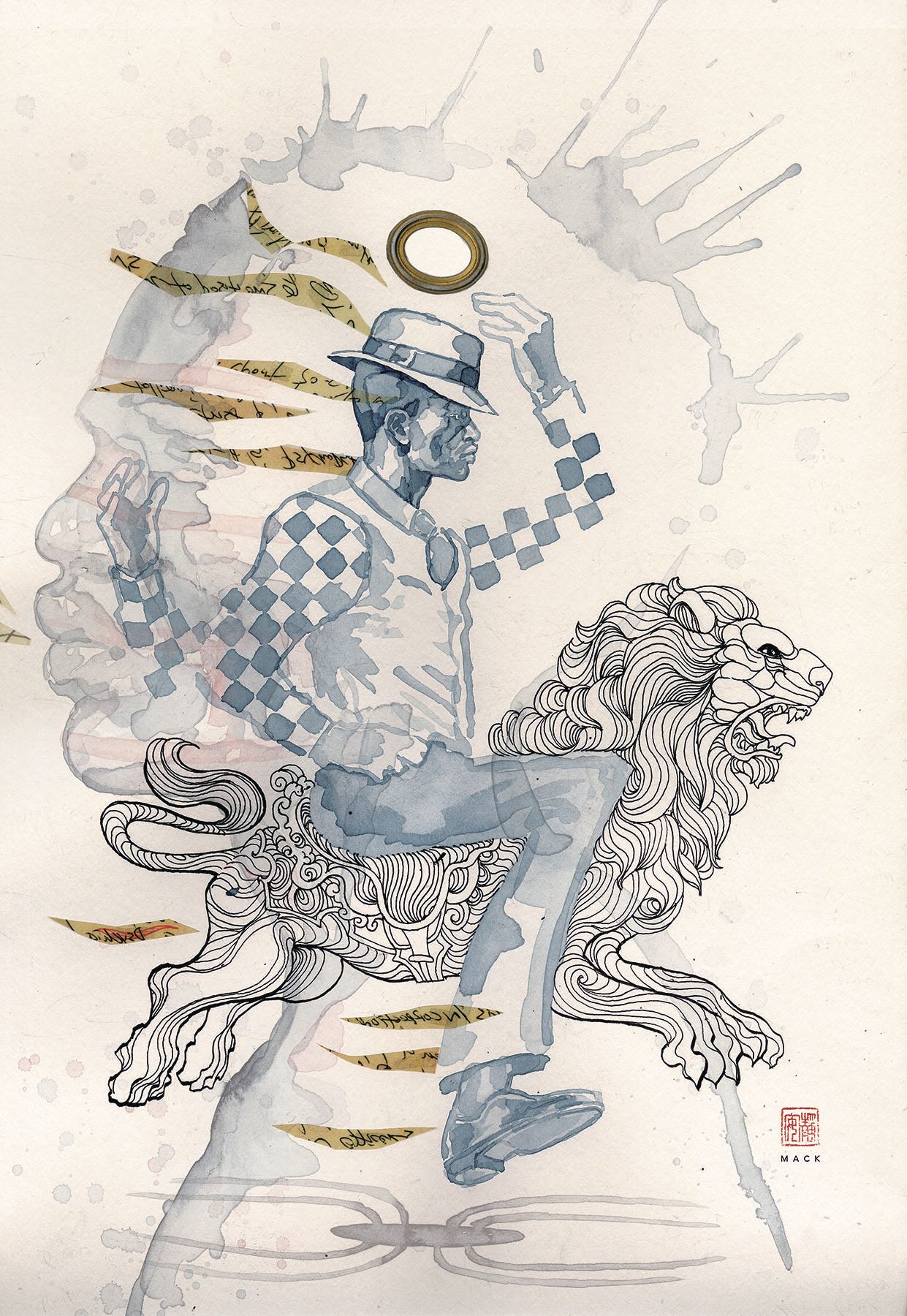 6. Mama-Ji. One of the many incarnations of Kali outside of time as goddess of change, time… 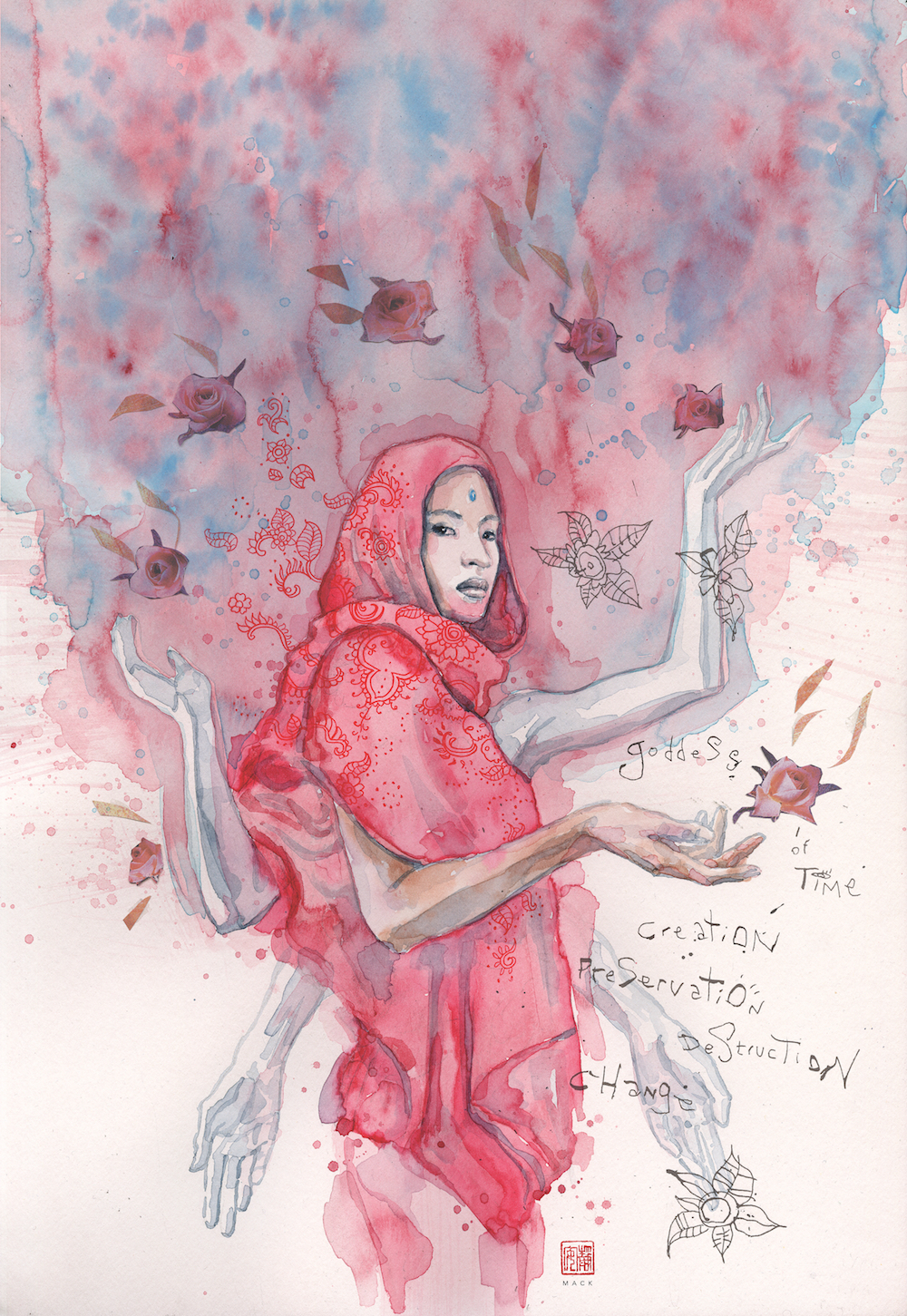 7. Buffalo Headed Man. I was listening to American Gods on audio as I was traveling, including traveling through Hawaii. On the Big Island, before I climbed the big steaming volcano, I saw a Buffalo head and took a photo of it, which I later used as one basis for this image. I had originally designed this with a fire in front of him. Then I decided to leave it out, as if the fire lighting was perhaps radiating from inside him. 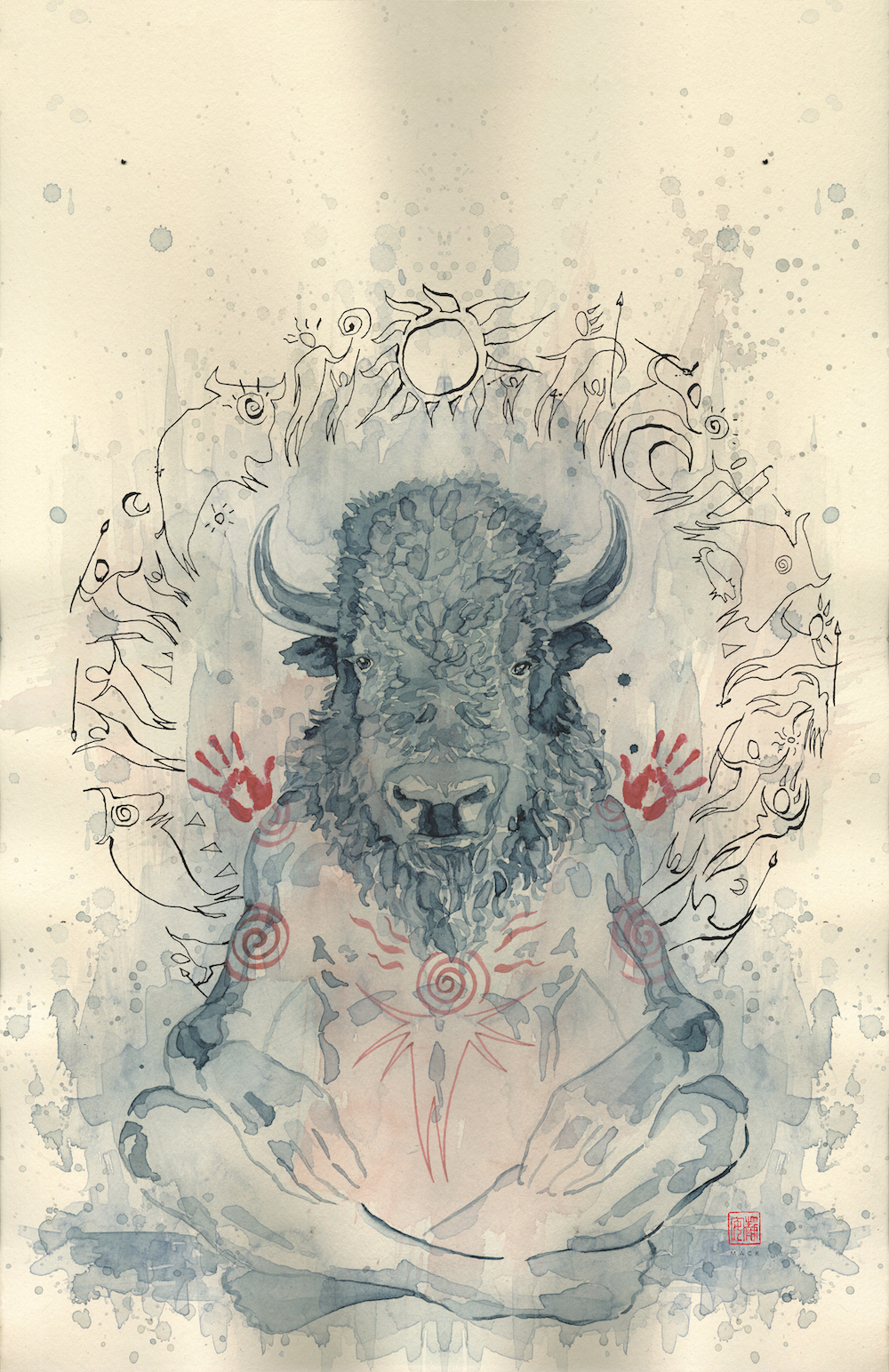 8. The Djinn. In many of these covers, I included a bit of the actual text that crystalizes a moment for the character in the book. This image is acrylic paint over collage. I collaged the brighter colors on top to suggest the fire radiating from his eyes. 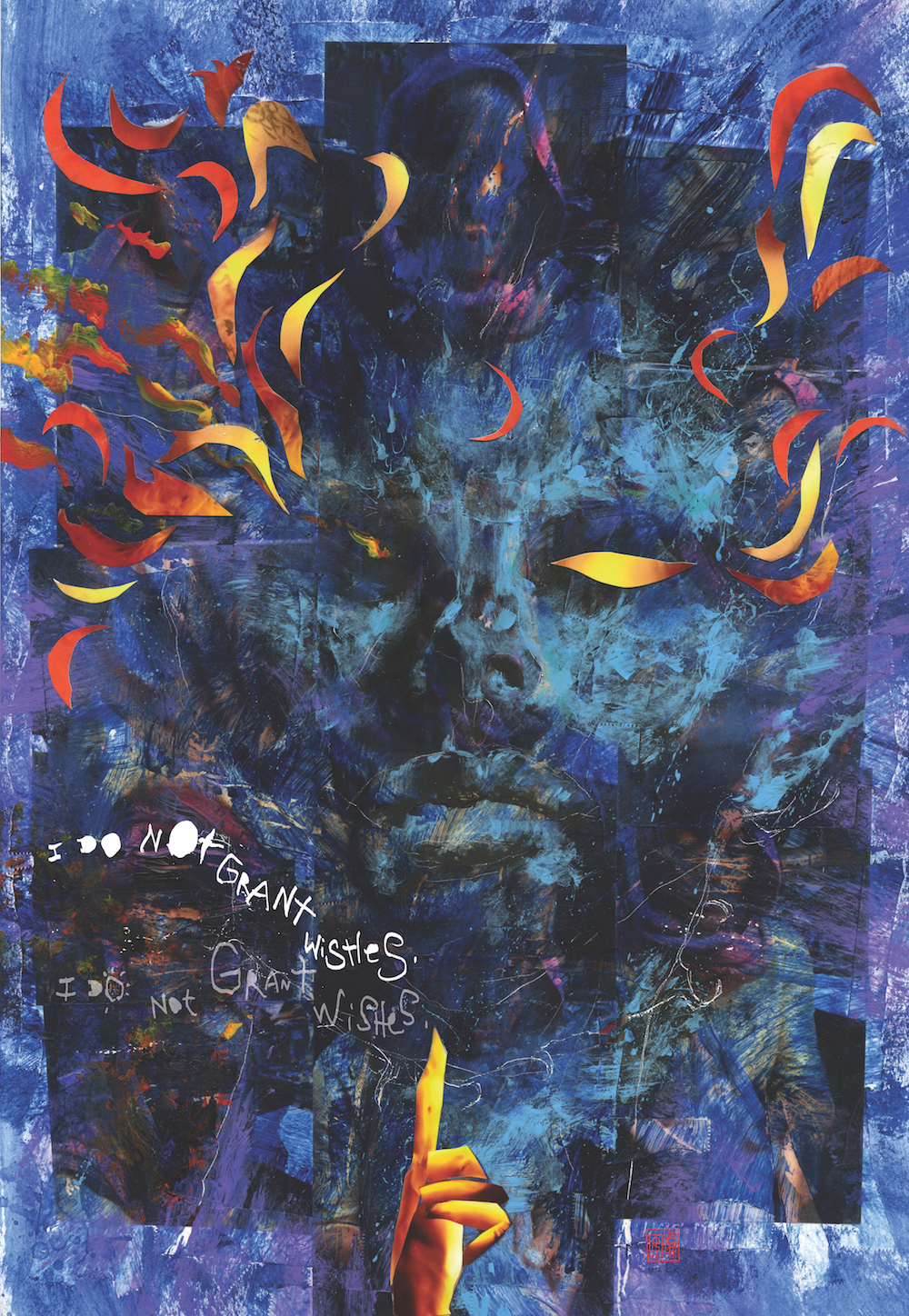 9. Bast. In overlapping cat and human form. Mr. Ibis, Jacquel and Horus are also included in their mythical Egyptian forms. The figure and cat shape are watercolor. The background is acrylic on canvas. There is also papyrus and ink. At one point, my coffee spilled on the image. I decided that I liked the effect it had and left it there. I also realized that it was a shade that I needed for the skin tone and painted with the spilled coffee to round out her myriad hues. 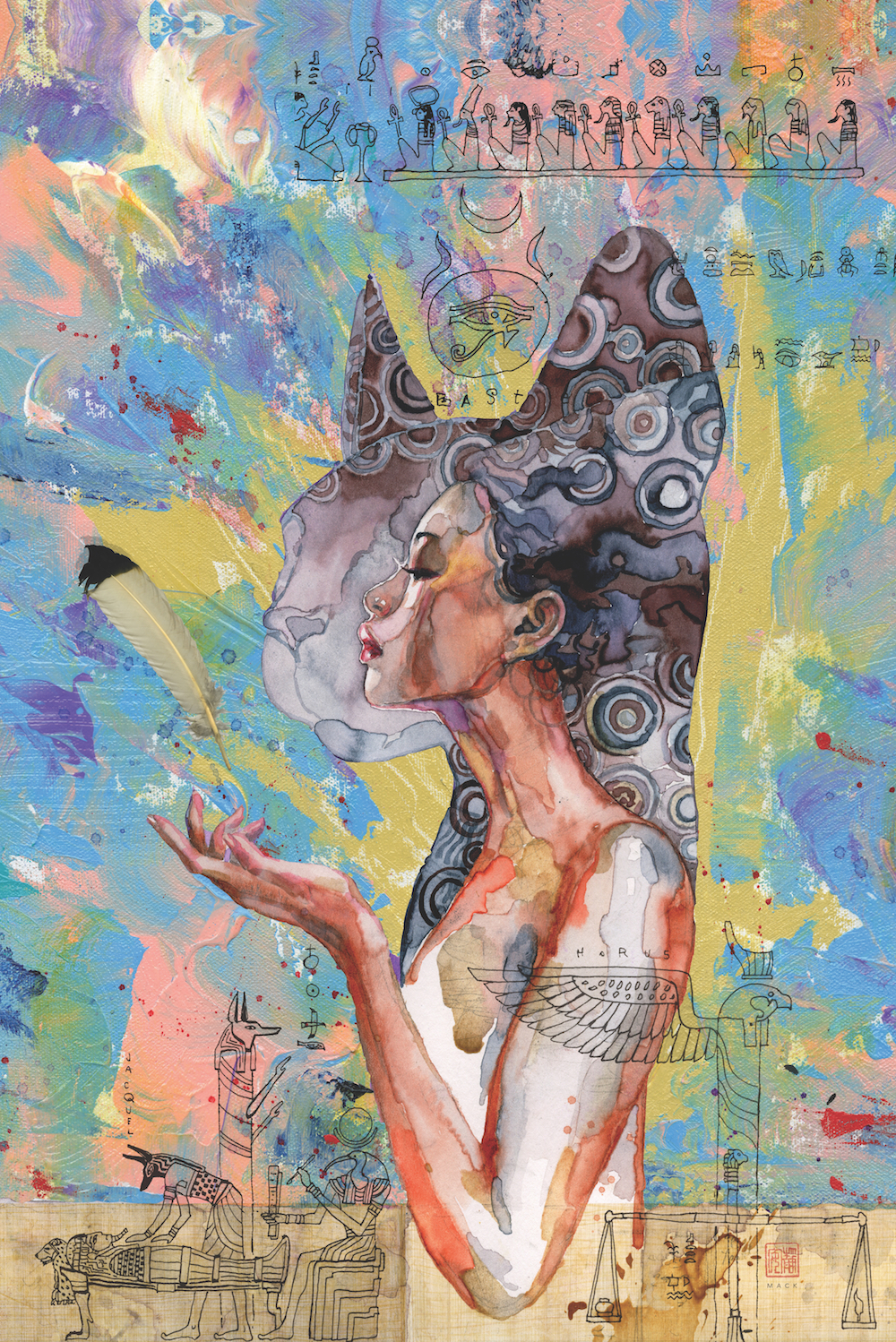 American Gods: Shadows is now available in hardcover and lists for $29.99. The second monthly series, My Ainsel, has just begun.