R. Sikoryak and his band of comics creators bring their live show to Asbury Park, N.J., on 2/15. 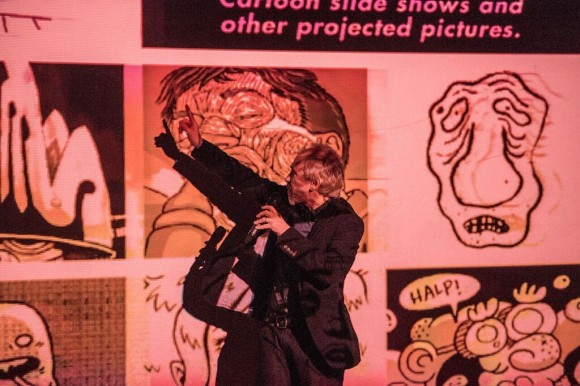 I’ve seen Sikoryak and company put on their Live Comics Carousel, and it is incredibly entertaining. If you’re anywhere on the Jersey Shore, or even way inland, brighten up your dreary Monday winter night and see this show. It’s only $10!!!

CAROUSEL comes to House of Independents in Asbury Park, NJ 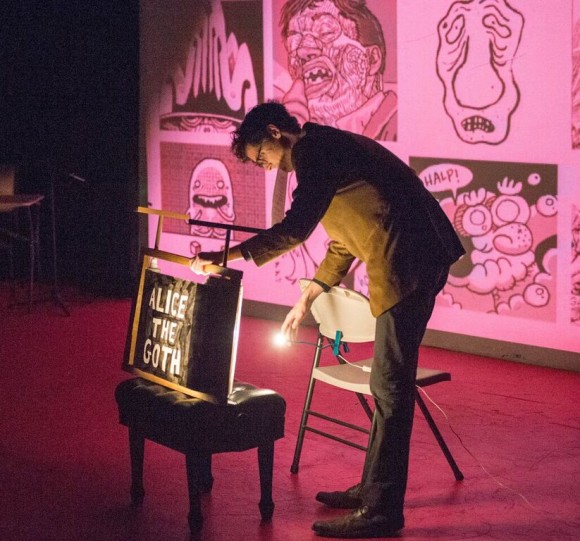 Before the audience’s eyes, a series of comic-book illustrations appear on screen, accompanied by live narration, music, and other sound effects. The lush images come together to form a story, be it humorous or philosophical or any other genre. Each presentation is one-of-a-kind, never seen before, and utterly unique. Led by R. Sikoryak, a group of talented comic-book artists builds this hybrid spectacle, suited for both children and adults.

R. Sikoryak has been hosting this spectacle show since the 1990s, and is a wildly talented illustrator who has submitted cartoons to famous sources such as The New Yorker, The Onion, and Nickelodeon, as well as having authored two of his own graphic novels. Dozens of artists have appeared with CAROUSEL SLIDESHOW, all providing their own individual creative talents and unique skills.

Maëlle Doliveux is an illustrator who has received recognition and awards from major sources, and worked with clients such as The New York Times and the Spongebob Squarepants comics.

Emily Flake is a cartoonist, illustrator, and writer, and has had cartoons published in the New Yorker and MAD Magazine, among others.

Jeffrey Lewis is best known for albums of folk and rock music, but he also makes comic books, including a self-published series called Fuff, and works on projects with organizations such as the History Channel and The New York Times.

Neil Numberman is the illustrator of multiple graphic novels, and has written both picture books and comic books.

Lauren R. Weinstein is a cartoonist, illustrator, and painter who has published three books and has had work included in many others.

This talented crew will be joined by  Jim Torok, an artist from Brooklyn, NY, who will provide “low tech animations” to the show, adding a whole new dimension to the artwork. Together, these artists will combine their talents to create a unique and original spectacle never seen here before.