The underground artist will be visiting Desert Island 2/26. 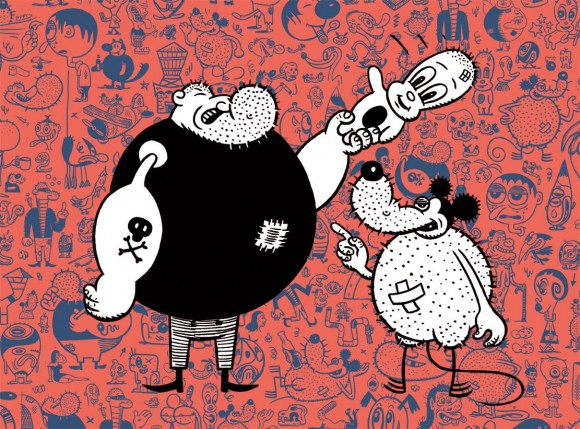 Buddy Cliff tipped me off to this event Friday night in the Borough of Kings, so if you’re in the NYC vicinity, go, man, go!

One of our all-time favorite artists is coming to help us celebrate eight years of Desert Island! Kazimieras G. Prapuolenis, aka Kaz, was a frequent contributor to the comic anthologies Raw and Weirdo, and has a huge new book with all of his great Underworld strips.

In addition to his career as an Emmy-winning writer for animation (Cartoon Network’s Camp Lazlo, Disney’s Phineas and Ferb, and Nickelodeon’s SpongeBob SquarePants), Kaz has been unleashing his id and corrupting generations with his Harvey-nominated weekly Underworld comic strip since 1992. Underworld hilariously depicts sordid doings in a surreal city, stuffed with almost-parodies of famous comic-strip characters, a healthy dose of cigarette-smoking cats, cute little saccharin-cuddly creatures, media-damaged kids, and much more — all destined for a sardonic smashing in typically acerbic Kaz fashion. Kaz’s strip runs in many American alternative weeklies such as the New York Press and the SF Bay Guardian. The Underworld: From Hoboken to Hollywood will be the first-ever omnibus collection of the very best of the strip’s 23-year run, with annotations, photos, and other surprises from the author (along with a foreword by Mutts creator Patrick McDonnell).

The signing is at 7 p.m. at Desert Island, 540 Metropolitan Ave., Brooklyn. Click here for more info.