It’s Wednesday, and this week we have some great books coming from Black Mask Studios, Boom!, and Image. 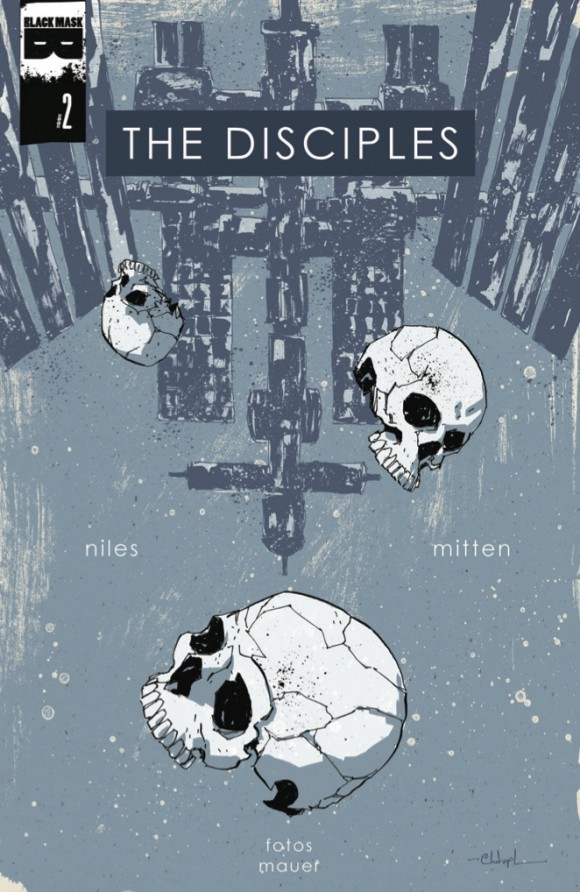 Over the last few months, Black Mask Studios has silently begun putting out increasingly impressive titles, establishing itself as a legitimate up-and-coming publisher with a slate of comics that mingle indie-sensibilities, progressive ideology, and a love of sci-fi and horror. The company has shown a canny knack for self-promotion – We Can Never Go Home, a 1980s Bonnie-and-Clyde story featured a number of great variants, themed around old punk albums (my personal favorite is the Minor Threat homage), with its SDCC cover becoming the show’s most sought-after book – and a deliberate willingness to promote the works of lesser known creators, who pull from diverse backgrounds including film, music, or political activism, rather than rely on the name value of its more established creators, such as founders Steve Niles (maybe best  known for writing 30 Days of Night) and Matt Pizzolo, each of whom put off announcing any series in the company’s first round of books in 2013/2014 to allow a grassroots growth of the less-established talent.  All of which has resulted in a building groundswell of positive responses for the company and its growing stable of series helmed by relative unknowns in the industry.

The Disciples, written by Niles and artist Christopher Mitten, is one of the studio’s books that has been met with an immediate positive response: the first issue quickly sold out and a second printing was ordered, and luminary horror writer/director/guru Wes Craven is already on board to work on a TV adaptation with Niles. This response is for good reason, namely that the series is well-written, fast-paced, and legitimately creepy. The basic story follows a group of interstellar private investigators looking to recover a missing girl who has taken off to one of Jupiter’s moons to join a reclusive and mysterious cult. On the way, one of the investigators begins to have strange and dark visions, until, at the end of the first issue (spoiler!) a monstrous creature appears in their spaceship. The second issue picks up just after right the first, with the crew trying to find this terrifying visage, and dealing with the repercussions of its visit.

The Disciples is a space-horror, something akin to a hybrid of Event Horizon and Killjoys, but far better written than both; it effectively plays on the sense of isolation and unknown in extreme situations, based around substantially agnostic but likeable characters who have been engaged to perform a specific mission. Niles nails the pacing of story – it moves quickly and there is sparse dialogue, just enough to give a sense of the characters, but leaving enough emptiness to fill with a looming tension. Mitten takes over from there, with artwork is pitch-perfect for story, and truly excellent in setting the book’s scene, namely wide-open and desolate spaces; he gives the book its sense of dread and ominous foreboding. Ultimately, The Disciples stands on its own as an enjoyable read, but also is a bit of the canary in the coalmine for Black Mask Studios, testing out the reception to the studio’s titles as the incorporate more established creators while focusing on their independent direction, and from all indications, the bird is doing just fine. 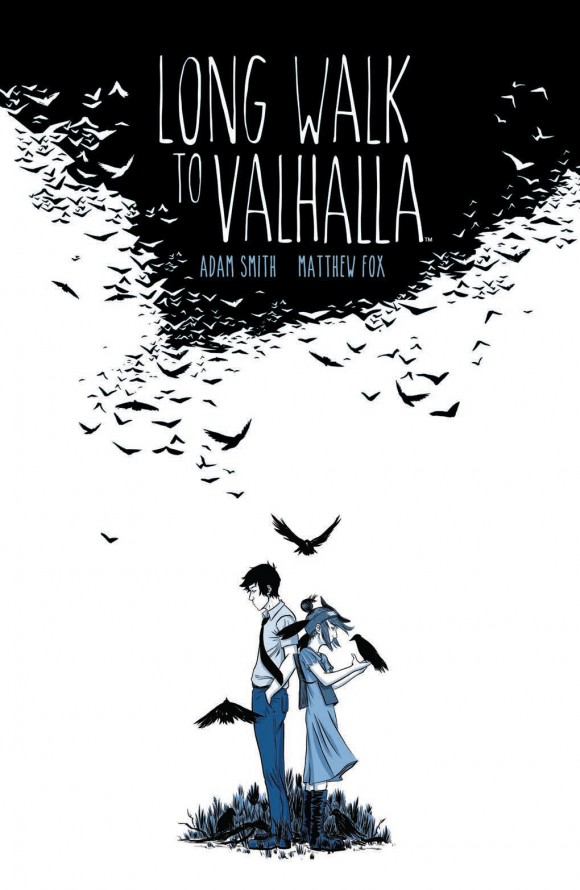 So I normally write here about books that are coming out today. And I try to stick with that. But sometimes I cheat, like today, as a mea culpa for not writing about this book last week, but so be it, this is my penance. So here goes: Long Walk to Valhalla is a hardcover graphic novel that was put out by Boom! Studios last Wednesday through its Archaia imprint, and this book deserves its appropriate recognition. Written by Adam Smith and with art by Matthew Fox, both relative new-comers to the comic industry – this book was accepted by Archaia through an open submission contest – Long Walk to Valhalla tells the story of Rory and his severely fractured relationship with his mentally challenged brother, Joe. Rory is forced to confront these issues when he meets a young girl, Sylvia, in a cornfield who claims that she is a Valkyrie, the daughter of Odin, and that she is going to take Rory to Valhalla to wait for Ragnarok along with the other dead fighters. Rory, insistent that he is not, in fact, dead, objects, as the two end up wandeingr through stalks of corn while Rory pours over not so fond memories of his youth: his abusive and neglectful father, their abject poverty, Joe’s marginalization and Rory’s efforts to protect him.

In describing Long Walk to Valhalla, I could use a number of superlatives: it is a well-written, engaging story about growth, loss, forgiveness, and struggle and bravery that day-to-day life can demand that often goes unnoticed and under appreciated; it gives recognition to the struggles that Joe experiences with his limitations, but also thought to his caregivers experiences. It is a story about the burdens that we each shoulder and carrying on even when they become too much. In the end, however, it is an enjoyable book that is sincere and heartfelt, but also inspirational in its own right, an edict about braving on in the face of adversity. 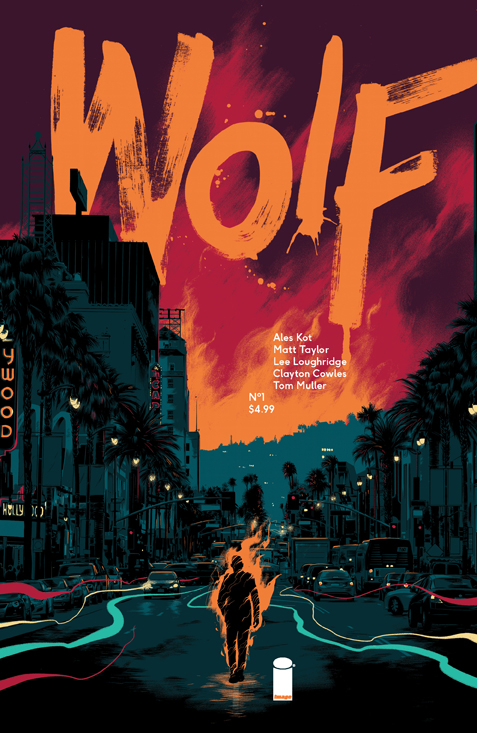 Ales Kot has, in relatively short order, built a strong reputation for his writing, wearing his progressive but pragmatic politics on his sleeve, all offset (or highlighted) by often surreal backdrops.  Zero, an experimental project involving a revolving cast of artists, explored the lingering after-effects of the protagonist’s exposure to war and extreme violence.  Material follows facially disparate storylines about a former prisoner in Guantanamo Bay, a flailing Hollywood actress, a young boy protesting against police brutality, and others.  The Surface tells the story of a group of hackers in Tanzania, a sic-fi and dystopian examination of wealth disparity and consolidation, and the degradation of privacy in the public sphere.

Wolf is Kot’s newest series from Image, although “new” is relative as the majority of his works are only a few issues deep.  Wolf continues in the footsteps of his other works by taking on heady topics through the veil of the surreal: the protagonist, Antoine Wolfe, a/k/a the titular Wolf, a veteran attempting to find a new level of normal on his return from duty.  In the first issue, Wolf becomes embroiled with a shady (and overtly racist) businessman who has a proposition for Wolf, an unstated mission that involves a woman that the businessman once killed.  But the series is anything but a straightforward story of a returning veteran, like Joe Hill’s Thumbprint, as Wolf’s world, which is every bit modern America, is home to any number of mythical and magical entities:  there are mind readers, vampires, and Wolf’s best friend is a Cthulhu hybrid, each of whom are part of daily life, integrated into broader society.  Wolf himself is a magician who is, should we say, impossible to kill (or maybe just keeps coming back to life).  The first issue is a strong jumping off point for the series:  it is directed, tightly written, and is well-paced, and replete with the gravitas and oddities that have become Kot’s hallmarks.