Our man G.D. Kennedy doesn’t dislike superheroes, he just likes comics without them more. So we’ve decided to give his regular column a name: COMICS SANS CAPES. See what we did there? We’re clever like that. — Dan 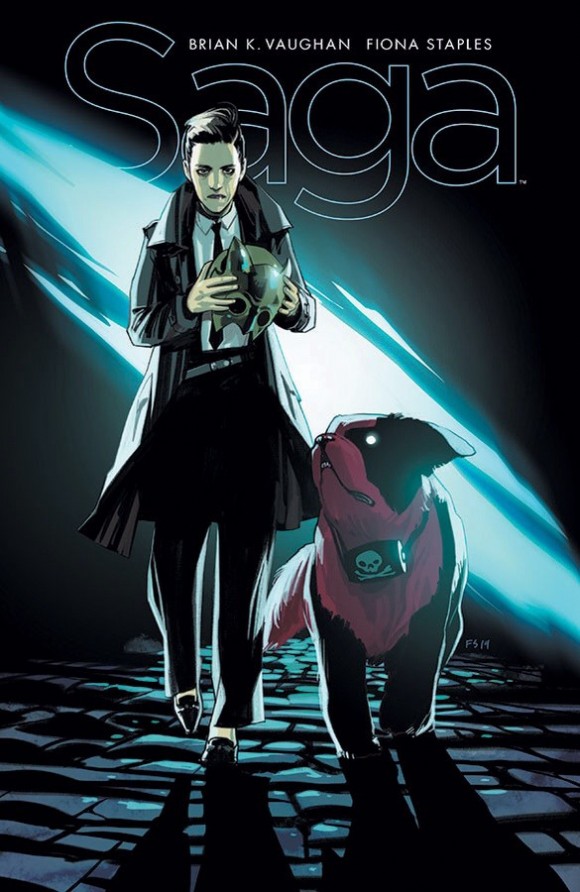 Another six-issue chapter of Saga draws to a close as Brian K. Vaughan and Fiona Staples head off for one of their brief, planned hiatuses, and all I can think of is Vaughan’s claim at New York Comic Con that he intends for Saga to run for one more issue than Robert Kirkman’s The Walking Dead. At this point, the numbers are moving in opposite directions, with The Walking Dead having recently (if temporarily) moved to a biweekly format and being maybe the most routinely punctual of Image’s often sporadic titles. But the breaks are important in that they give Vaughan the time to piece the story together and plot forward, and for Staples to continue to produce impeccable artwork that is easily the best presently being produced in comics today.

Vaughan is a master at almost sadistically ending each issue with a cliffhanger, and issue 23 was no different, as it closed with Alana, Hazel and crew flying off into the space, hostages of Dengo the terrorist robot janitor, while Marko, left behind, looks on from below, only to find himself finally coming face-to-face with Prince Robot IV. Issue #24, however, opens on an entirely different note. One of the great parts of Saga is the vast world that Vaughan and Staples have created, not just in scope but also in the catalogue of rich characters that they have created and can draw from. Of these, conspicuously absent from the most recent arc have been the Will, Gwendolyn, Sophie, and, of course, Lying Cat, and while it was inevitable that they would find their way back into the story eventually, #24 finally draws them back in, giving us a glimpse of what they have been up to for the year or so that passed between the end of Issue #18 and the start of #19. There is an easy chemistry between the latter three that Vaughan exploits perfectly in this issue, and seeing an older Sophie, far away from her days as Slave Girl, is a great payoff, but, as always, Lying Cat steals the show in just a few panels (and is particularly awesome in playing with her new “toy”). 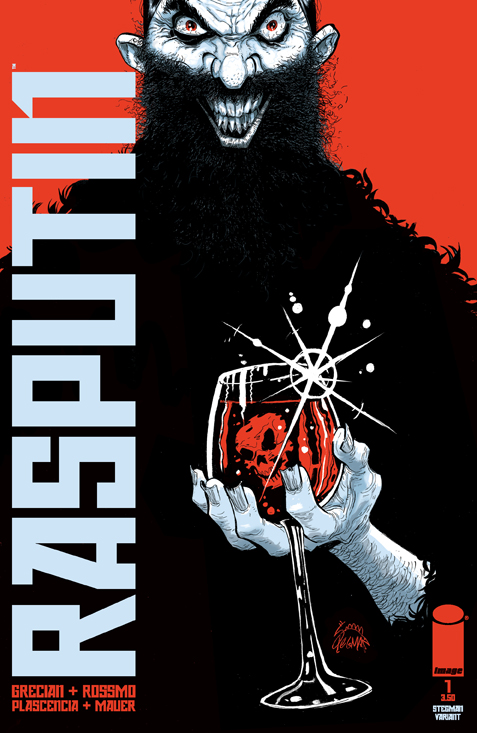 Rasputin is a new Image series from Alex Grecian and Riley Rossmo, the same team that brought us Proof a few years back. The book is, in the creator’s words, a “true-ish” retelling of the story of Grigori Rasputin, the Mad Monk of Russia who ascended through Russian society to finally become an adviser to the last Tsar, Nicholas, until he was finally assassinated in 1916. The first issue is principally told as a flashback to Rasputin’s early years in Siberia, living out hard winters with a cruel and abusive father who levied brutal assaults on Rasputin and his mother for the slightest provocation. The few moments in the present suggest that the series will likely offer extensive looks at Rasputin’s rise to prominence in pre-Bolshevik Russia, set against a conspiracy by certain of his “friends” to assassinate him.

But Rasputin was as much as myth as he was a man, and all the more so in the comic, as Grecian and Rossmo play on the old stories that Rasputin was imbued with mystical healing powers, and that he could not be killed in the faces of repeated assassination attempts, while the ghost of Rasputin’s father serves as a backdrop to the issue. The issue is light on narrative and moves quickly, but manages to tell a lot in its silence, as Grecian’s scant prose allows Rossmo great latitude to play in wide-open spaces through principally visual story-telling.  The result is a beautifully drawn book that may be some of Rossmo’s most impressive and most mature work to date. 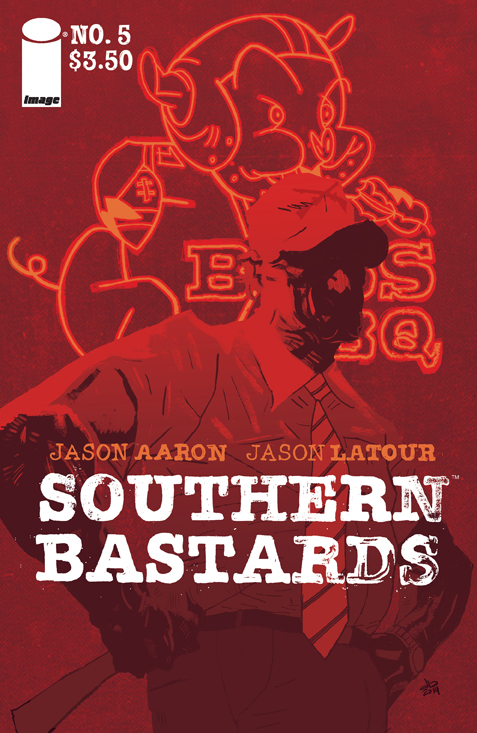 From its first issue, Southern Bastards has borne a remarkable resemblance to Jason Aaron’s masterpiece series Scalped, as the book exists in a heavily nostalgic place, ruminating over the idea of the story’s ostensible protagonist coming back to their childhood hometown after years away and rekindling the dread and familial baggage that had led to the exodus in the first place. Trading on ideas from Scalped could hardly be worse, as that series remains one of finest comics stories told in recent years.

And then Issue #4 happened — with erstwhile hero and all-around good guy Earl Tubb broken and battered and presumably dead on hot Craw County pavement, the hints at a heroic return home vanished. This was, to say the least, a jarring and unexpected sequence that completely changed the course of the series, and did so in a bold and impressive, if not mournful way. Certainly, any notion that Tubb might have survived the act should be dispelled by Issue #5 (unless Aaron is prepared to take the series in a drastically different direction), as the issue follows Coach Boss, Tubb’s assailant, through the aftermath of the assault, including attending Tubb’s funeral, while hinting at Boss’ past. This is an approach that Aaron used successfully in Scalped, namely redefining the supposed villain as conflicted and, at times, even a sort of anti-hero, and it will be interesting to see how Aaron recasts Coach Boss while we readers wait for a new protagonist to fill the void left by Earl.