A lot of interesting books coming out this week from Image and Boom!, including the long-awaited return of Nonplayer, an Airboy reboot, and much more.

This is a very cool week for comics.  Image’s prodigal son Nonplayer returns from a four-year break after its first issue, while Boom! has two excellent books in Arcadia and Broken World. There’s plenty more that I could list, but for now, here are a few highlights: 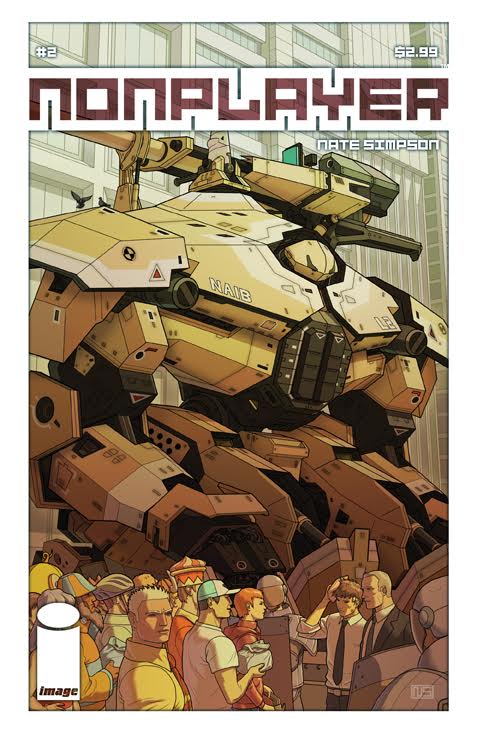 Once upon a time, there was an Image series called Nonplayer by an up-and-coming talent named Nate Simpson.  Issue 1 came out in 2011 and was met with critical acclaim, while fans clamored for more, demanding a second printing while prices on the secondary market soared.  Simpson was an overnight sensation.  And then, issue 2 . . . just never happened, leaving Nonplayer in a sort of suspended animation, existing more as a mythical creature, said to exist and with no real proof whatsoever, a fantastic series that somehow, for no apparent reason, burned out after just a single issue.

And now, after just about four years, Nonplayer returns this week, presaged by a third printing of issue 1 in early April.  While it’s hard to say that a near half-decade delay makes the wait worthwhile – which is probably fair to say just about any book – there is no question that the series is immaculately crafted, as Simpson wears the many hats of creator, writer and artist, and does so with aplomb.  The series is set in a future world not wholly distant from our present reality, except that robotics have become increasingly common and there is a cultural trauma resulting from something referred to as the Incident.  At the same time, the doldrums of modernity have taken their toll on the world’s populace, who increasingly are sinking into virtual second-lives, and in particular a game called Warriors of Jarvath, a World of Warcraft style fantasy MMORPG.  However, to make the game as realistic and compelling as possible, the makers have surreptitiously – and illegally – used AI to give life to the nonplayer characters in the game.  The second issue follows after the ostensible main character, Dana Stevens, killed a nonplaying character who was a queen in the game, leading to unrest in the Jarvath; the issue principally splits time between exploring the use of AI in the game, and a standoff between the police and a massive, fish-throwing, proselytizing robot.

Nonplayer weaves between the virtual life and back again, blurring the boundaries of what is and what is not artificial and constructed.  In this way, the series bears some resemblance to David Cronenberg’s  Existenz, which examined the increasing challenging to parse through different layers of virtual existence, specifically through immersive video games.  Simpson’s writing is well refined but manages to keep a certain levity to it, avoiding what could be a dour series by giving it a nice feel of vibrancy.  And his artwork deserves recognition:  his drawings are incredibly detailed depictions which provide windows into a fully rendered futuristic world, while at the same time giving life to the wild fantasy world of Jarvath.  Simply put, he gives life to multiple and disparate worlds in each issues with an architectural precision that is stunning.

At this point, however, Nonplayer is almost as much about the production as it is about the story, as it has become a cautionary tale about instant success, as well as a reminder of the real-life challenges faced by creators who have day jobs other than their comics. Simpson is not a comic creator by trade, but rather is someone following a passion while trying to juggle the hardships and time constraints of family, work, and everything else that can make life so demanding. Of course, writing a comic is a time consuming process, and drawing them even more so, and trying to do both while managing a full-time day job and a family are incredible burdens, and Simpson has indicated in interviews that the trying to produce a monthly comic, manage these burdens, and the pressure and excitement of the glowing reception that the series met on its launch.  The second issue’s mere existence is inspirational in its own right. 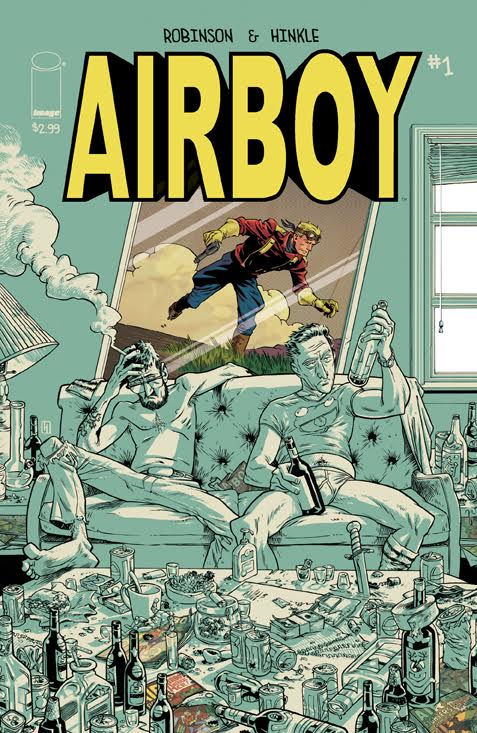 The concept of Golden Age reboots is not exactly new.  Miracleman/Marvelman is a seminal work, and Valiant  practically based its business model on this concept in the 1990s.  At this point, this rebooting class heroes has become a bit of a trope:  take old characters and villains, modernize them parlaying unimpeachable heroism into “grit” through the addition of blood and sex and other “real life” elements that Golden Age editors would not have deigned to print, tweak motivations slightly but not so much as to make the characters unrecognizable, and then hit “play.”

So the concept of bringing Airboy, a World War II-era back to comics, is, in and of itself, nothing revolutionary; in fact, Airboy was dragged through the wringer before as Eclipse Comics brought him back to life in the 1980s.  Which begs the question of why did writer James Robinson – who has had some success in the reboot genre with his Starman series in the 1990s, earning him an Eisner Award – and artist Greg Hinkle felt it necessary to wander into the abyss of character recycling?

The answer is that they have opted to, in fact, take a novel approach to Airboy by subverting the reboot genre, keeping the hero clean-cut and naively optimistic, and burdening the writers themselves with the “real world” trappings.  The first issue is hardly about Airboy – he appears only on the last page – but is about the process of creating the reboot comic Airboy, and and the writer’s block that Robinson and Hinkle need to overcome to fight to generate ideas for the series.  Which, apparently, involved copious amounts of sex, drugs and alcohol.  See, the protagonists of the series are Robinson and Hinkle themselves, as they ruminate over how to tell a story that neither of them is particularly interested in; it is only after a bender that Airboy appears to them to reprimand them for their conduct, which, of course, may simply be a product of their drug-addled minds.  If nothing else, the series is an inventive attempt to turn a subgenre on its head, but Robinson’s writing is consistently witty and clever enough that the constant self-referencing actually becomes compelling, rather than distracting and tiresome.  It is hard to chart where this series heads after only one issue, but, at a minimum, it is engaging as a high-concept approach to a tried model.

And a few quick highlights for the week: 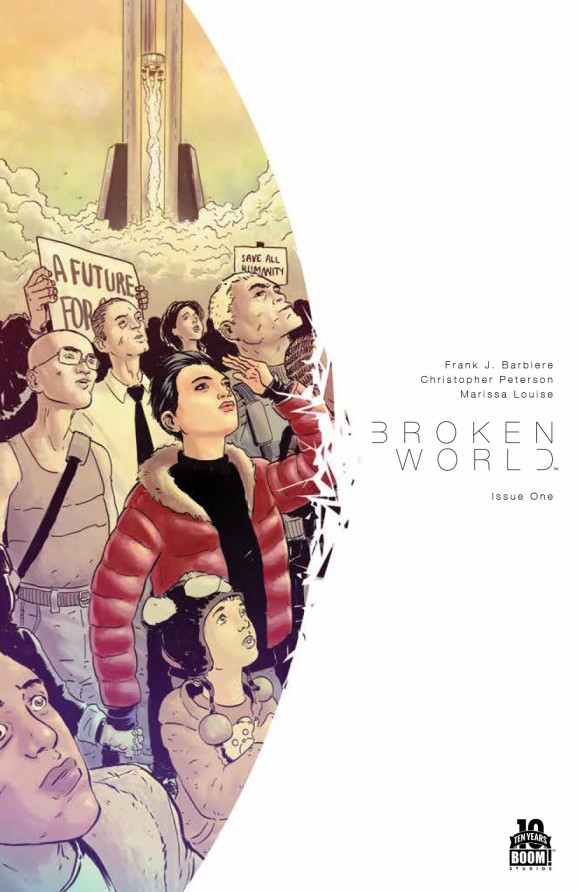 Broken World #1:  A new miniseries from Frank Barbiere, Christopher Peterson and Marissa Louise, Broken World finds the Earth just hours before an impending apocalypse, as the majority of the population is being shuttled off the planet’s surface to avoid a coming meteor.  A cool concept, although given its apparent scope and that establishing the basic premise took the whole first issue, fitting this story into four issues will be a feat in and of itself. 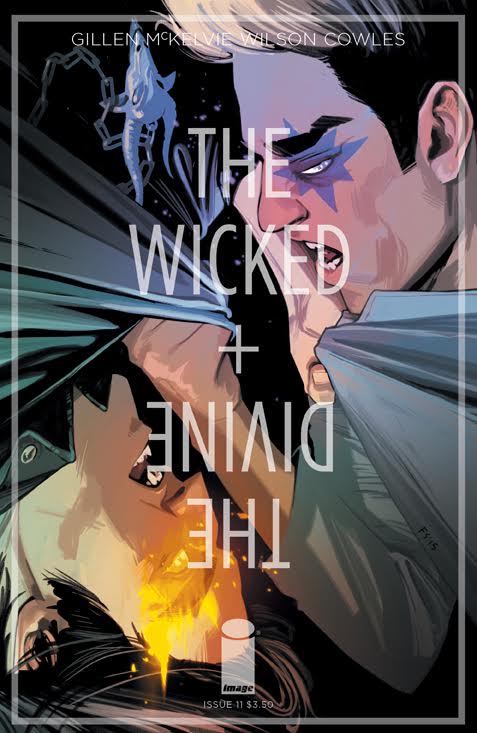 The Wicked + The Divine #11:  A nice week for The Wicked + The Divine – first, a TV series gets announced, and then a new issue from Gillen, McKelvie and co. that might be the best one to date. It has a nice character-driven focus that, in my view, is a welcome change of pace from the frequent ensemble nature of the series. Oh, and a nifty variant cover by Fiona Staples to boot (above). 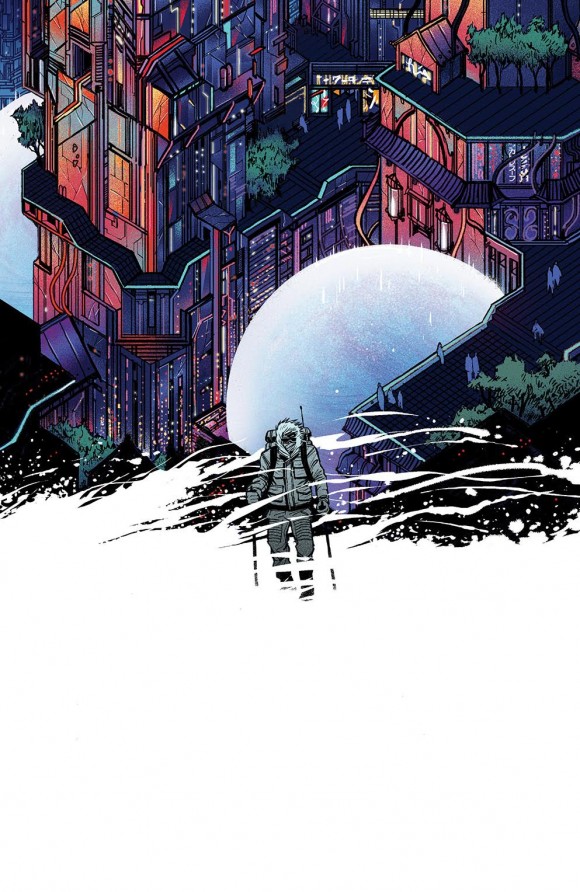 Arcadia #2:  The second installment of a cool new series from Boom!, Arcadia is an impressive overture from a couple of newcomers — Alex Paknadel and Eric Scott Pfeiffer — that plays with layered realities in the wake of an extinction-level event that has left the majority of the world’s population as constructs in a virtual world. It has quickly landed on the list of titles that I look forward to each month.