G.D. Kennedy looks at a Low #5 and Birthright #3, a couple Image books that hit the shelves this week. 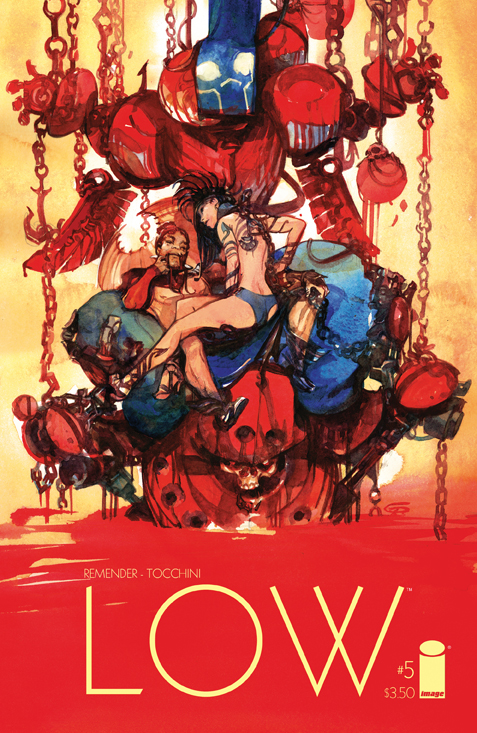 When writing about a Rick Remender series these days, it is hard not to step back and look at the broader body of work and just how consistently strong each of his series are. Deadly Class has developed into a very personal narrative about  growing up in a state of isolation, while Black Science faces the fears of aging, leaving a legacy, and parenthood. But for all that these books offer as far as developed characters and novel stories, they are flawed and imperfect: Black Science is, by design, a constant chase scene with no clear respite, and Deadly Class regularly toes the line of overwrought nostalgia.

Low fits in nicely with these other series, both for its strengths and its flaws. Low follows a mother and son, principally told from the view of matriarch Stel, who, after humanity has been forced to live underwater due to the damaged state of the surface world, are searching for habitable land as the underwater cities run low on air. The fifth issue takes place in one underwater city thought long lost, but in fact populated by roguish pirates who are led by Roln, the man who years earlier killed Stel’s husband and kidnapped her daughters. Low is inevitably character driven, and Issue #5 is nice evidence of this. We see just how strong of a character Stel can be in the face of adversity — in this instance, a prisoner to Roln, as she is forced to watch her son fight gladiatorial battles — and how far her son has come since the outset of this series, as he has begun the process of shifting away from a self-destructive depression that dominated the early issues.

Much like Black Science, the series is expectedly steeped in themes revolving around family: the expectations and burdens of families, the abject fear of losing a child (or two, in this case), and the lingering pain and heavy ramifications of serious loss. In reading Low, it is hardly a surprise that Remender is a father to young children, as he plainly uses the medium as an outlet for the angst that so many feel. But rather than allow his characters to wallow, Remender offers as a counterpoint to serious tragedy the unrelenting optimism of Stel, which cuts through what could otherwise be a heavy drudgery of character self-pity, and her son Marik’s process of healing from the loss. The end result is, to this point, two strong leads who each can hold the narrative on their own as needed.

The series, however, is not without its flaws, whether perceived or actual. In my view, these are principally technical – there are moments where the series does not feel wholly believable, as if important scenes are missing – and, while distracting, easily overlooked given the balance of the story. I have also seen complaints about Greg Tocchini’s artwork, in particular objections to its stylized nature and that it can be hard to follow at times. While there have been moments where the latter is true, I struggle to understand the former, as I find Tocchini’s artwork to be pitch-perfect for the series. He utilizes relatively simple lines and forms to create an airy and mysterious element to the series that emphasizes its sci-fi roots. As a whole, however, Low comes together as a very strong series with well-rounded characters, excellent writing, and exciting sci-fi elements, and certainly any flaws are easily overlooked by these strengths. 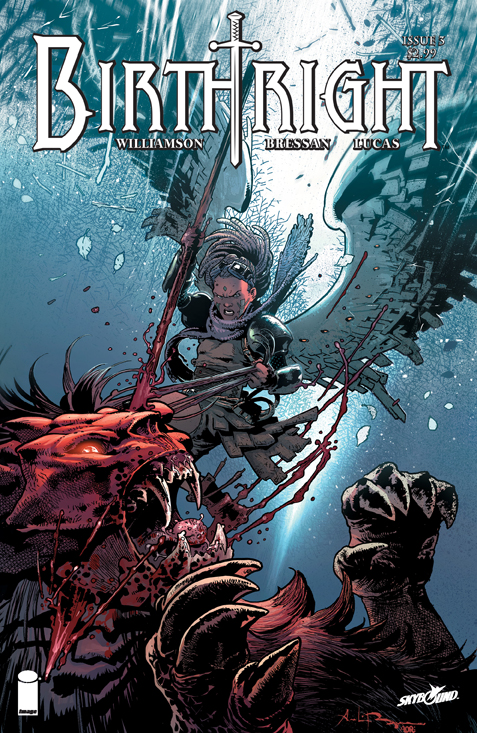 On its third issue, Birthright by Joshua Williamson and Andrei Bressan has become one of the more intriguing new titles on the shelves. The basic premise is that one year prior to the “present day” in the comic series, a young boy, Mikey, disappears in the woods. His father is accused of his murder, though no body is ever found and the father never tried, and the family disintegrates under the weight of the accusations and loss. A year later, a man appears, claiming to be their lost son who, for decades, has been trapped in an alternate world, Terrenos (in which time moves differently), a classic fantasy world steeped in monsters, magic and, most importantly, massive broadswords that Mikey has been using to restore peace so that he can return home. Now back on Earth, Mikey claims to have one last quest to complete, to kill five escaped fugitives from Terrenos, but his motivations are suspect, as, in fact, Mikey appears to be under the control of Terrenos’ ultimate villain.

The series has some real strengths that make it a very enjoyable read, maybe most notably Williamson interweaving two story lines, one about Mikey’s time in Terrenos and the other about his return to Earth, now an adult and a warrior trying to reconnect with his family. The third issue picks up with Mikey breaking out of police custody — after all, a grown man wearing a loin cloth, carrying archaic weapons and claiming to be a presumed dead child warrants suspicion — with the help of his father and brother, while jumping to Mikey’s first few days in Terrenos. Maybe the largest complaint that I have to offer is that the scenes in Terrenos have been so engaging and truly unique — the world that Williamson and Bressan have created is vivid with exciting monsters and an underlying epic quest — that it almost seems to get short-shrift when shifting between the two narratives. There is a real uptick in the storytelling when it shifts to Terrenos, and Bressan’s art thrives with a world that is just an empty canvas for unique settings, characters and creatures. In any event, the series’ first few issues bode well for the future of the series.