This is Image‘s big launching pad for the year to come. Having taken some time to digest the announcements, my overall takeaway is that they were not quite as immediately compelling as last year’s — no precedent-setting five-year deals this time — but there are some very nice books to look forward to. And even those pitches that sounded a bit stolid, the creative teams attached were impeccable, so the sky really is the limit.

So, without further ado, a few initial reactions to some of the announcements at this year’s Image Expo:

Brandon Graham, Cat Herder. At some point over the last few years, Brandon Graham evolved from being an irreverent cartoonist who taught that a cat’s anus is also a periscope (King City) and that werewolf sex is creepy and awesome (Multiple Warheads), to an irreverent curator of indie-cool comics, becoming an almost Ken Kesey-esque character overseeing strange and wild collective arts projects. 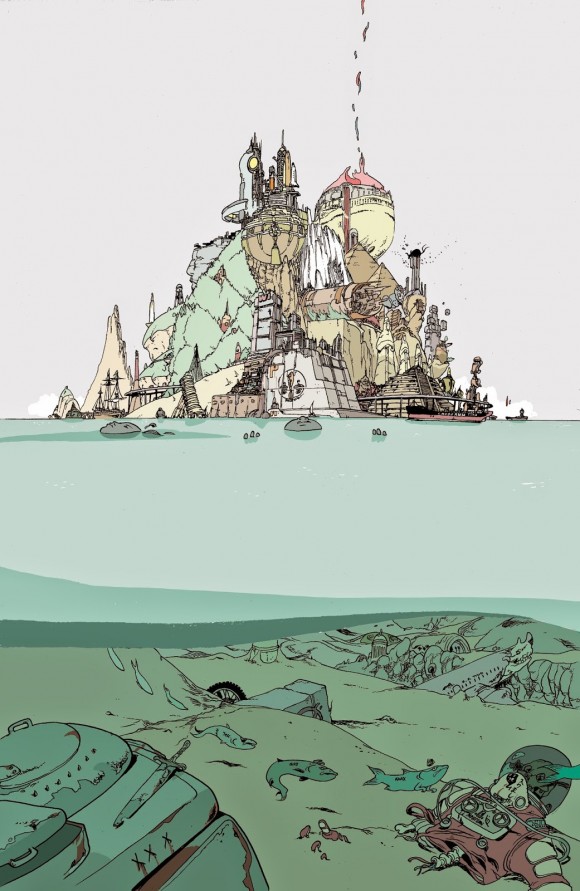 Prophet was the first hint at this as, by the series end, writers and artists were changing from issue to issue and page to page. Then, last Expo, Graham announced his 8house project, which is to be a set of mini-series that would be related but created by different artistic teams. Though this hasn’t been released yet, Graham assured the audience that this was on its way. And now, he and Emma Rios have announced Island, which will be a monthly anthology magazine collecting a variety of comics — 2-3 separate new stories per issue — as well as illustrations and other art.  The book will feature a rotating cast of excellent but not wholly mainstream artists — just a few of those announced already include Simon Roy, Ludroe, Farel Dalrymple, Michael DeForge, Marian Churchland — and a variety of high concept indie-style pieces. This may be my favorite announcement of the day (although 8house was too and ** tapping foot ** I’m still waiting, Brandon), although it’s a close call with . . . 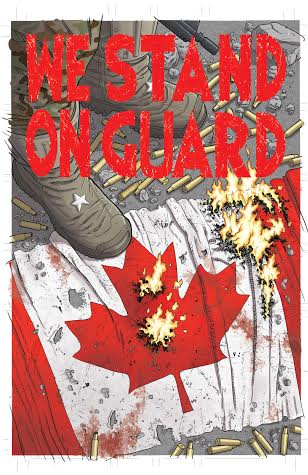 Doubling Down on Brian K. Vaughan. Announcing a new Brian K. Vaughan series is a bit like shooting fish in the barrel. People will coo and all is right with the world. It’s just that easy. So how do you top announcing a new Vaughan series? You announce two in one day. First, Vaughan will be working on We Stand on Guard, a futuristic mini-series with Steve Kroce in which Canada is invaded by the United States, a technologically superior country with, and I quote, “giant fucking robots.” And then, to finish his morning off, Vaughan announced that he would be launching a second series — this one ongoing — with Cliff Chiang, about  . . . paper girls?  The appropriately titled Paper Girls will be a coming-of-age piece about a group of four 12-year-old paper girls in the ’80s who witness an extraordinary — but not readily apparent — event one evening, a story somewhat akin, at least in concept, to Stand by Me. All in all, two very good announcements, as in Vaughan we trust. 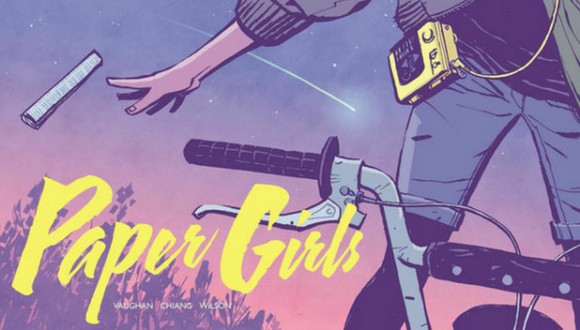 Plutona. Following on the theme of Stand by Me, Jeff Lemire, Emi Lenox and ubiquitous colorist-supreme Jordie Bellaire are teaming up on Plutona, a story about a group of five suburban children who find a body, the twist being that it is the body of a superhero. Based on the pitches, there is undoubtedly some conceptual overlap with Paper Girls, though how much is unclear. But I think it’s safe to say that regardless, a super-team of creators like Lemire and Lenox will have no problem making this story their own. This is another book to look forward to, if simply for the collaboration of this excellent team.

The Big Three? Image touted that, per Nielsen BookScan, it had claimed the second largest market share in graphic novels for 2014, at 16.48 percent, coming in second to DC’s 20.64 percent, but more than 4 points ahead of Marvel’s 12.37 percent. Sure, this is just graphic novels, and the data provided isn’t abundantly clear what comprises “graphic novels” — art-book maker Taschen, responsible for recent “75 Years of” comic histories comes in ninth on this list — but one way or another, Image has staked a strong claim to be considered on quasi-equal footing with the Big Two.

A.D.: After Death. Maybe the most compelling super-team of the day, Jeff Lemire, striking again, will be joining forces with Scott Snyder on a graphic novel titled A.D.:  After Death. The book is set in the near future, just after death has been cured. Maybe not the most novel of ideas, but there is a lot to work with in that concept, and in the hands of Snyder and Lemire, this book has incredible potential. 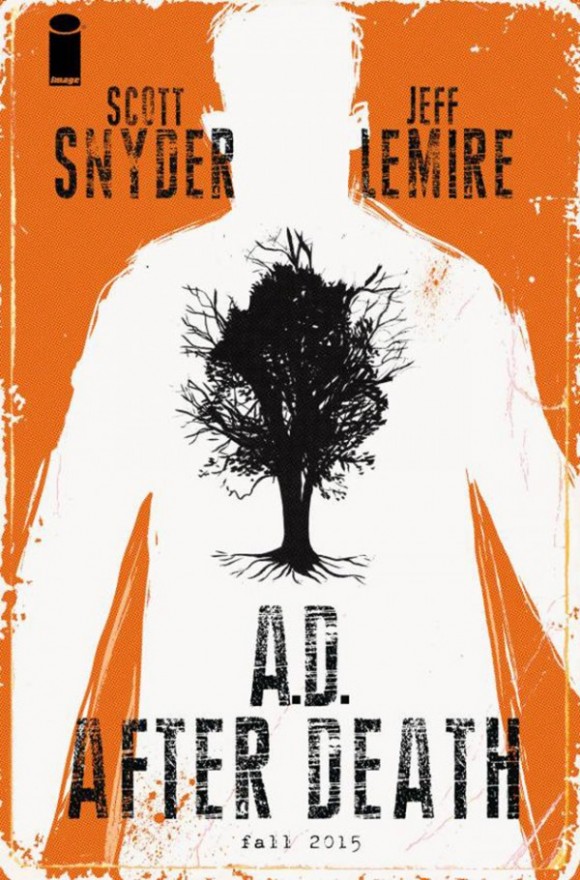 Humble Bundle. Internet altruist Humble Bundle is offering an amazing selection of Image books for download — a collection that includes the first volume of Alex + Ada, Deadly Class, Minimum Wage, and a few others. And a premium download of only $18 gets you the first 18 issues of Saga, the first 10 of Manhattan Projects, and the first volume of Velvet, Sex Criminals, Wicked + Divine, and a bunch more. This is a great way to sample some amazing books for a great price, with the option of putting your payment toward The Hero Initiative, a worthy cause.

Kickstarter can work. It’s a viable option for comic creators — or at least those who are already established. Brian Buccellato and Toni Infante‘s Sons of the Devil has been picked by Image from the smorgasbord of crowd-sourced, never-completed projects that is Kickstarter. Son of the Devil — a story about growing up in a secretive cult — was initially a Kickstarter-funded project aimed at combining both a comic and a film to create a multi-media experience.

Todd McFarlane. Spawn is now creeping up on 250 issues but is returning to its roots: McFarlane announced that original Spawn Al Simmons will be returning and that taking over writing chores will be Paul Jenkins. He also took the opportunity to announce Savior, a new series about an amnesiac with super-powers who appears in the midst of the “real” world. McFarlane is writing, which is fine, but I can’t help wishing that he would be doing the art. 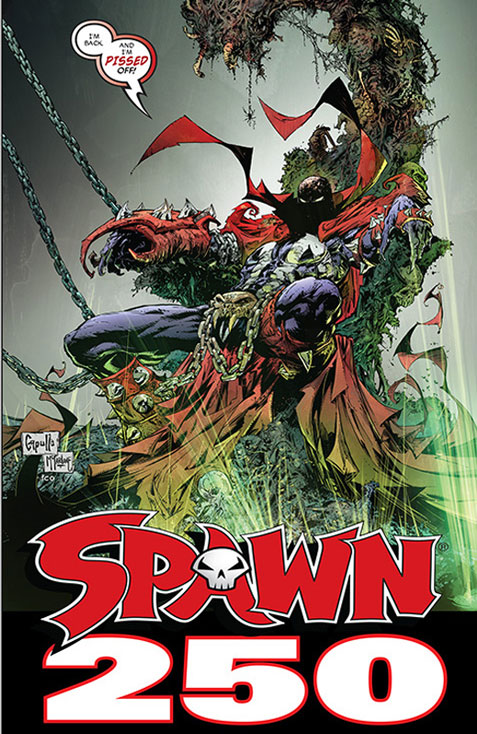 Fool me once . . .  Two new books were announced by Brian Wood: Black Road, which is a(nother) viking tale from Wood akin conceptually to Northlanders, and Starve, which has something to do with celebrity chefs becoming royalty. These series may have potential but, at this point, I have learned my lesson with Wood‘s creator-owned work: No matter how good the concept sounds, no matter how great the set-up — and Wood is great at concepts and set-ups — execution is another matter and, charitably, hit or miss. No thanks.

Oh Brubaker, Where Art Thou? Not that Ed Brubaker isn’t putting out solid work for Image — Fade Out has been an impeccably written mid-century crime drama, and Velvet is a nice noir as well — but after signing an unprecedented five-year deal, I thought that he might be a bit more prolific. Maybe I’m being a bit greedy, I don’t know, but no news from him at the Expo, sadly.