There are so many good, established comics coming out this week – Saga, Walking Dead, East of West, just to name a few – but there are also new titles that shouldn’t be allowed to fly under the radar.  Let’s take a look at a couple. 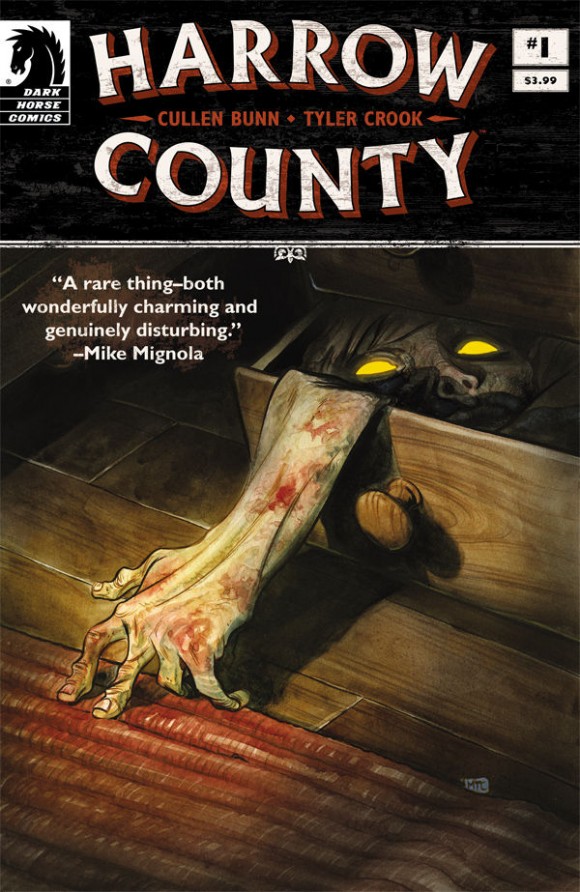 Harrow County, a new Dark Horse series from writer Cullen Bunn and artist Tyler Crook, is a haunting slice of gothic Americana, a horror series set in the rural South, likely in the late 19th or early 20th Century. The series opens with the grisly lynching of a witch by a town mob who, for years, had allowed the witch to live amongst them, turning a blind eye to the dark side of her craft while they reaped and exploited her talents for her own them. However, the town eventually comes to face the truth about the Source of her preternatural abilities and the cost that it carried, and, as a result hangs her (and shoots her and burns her, etc.). The series’ narrative shifts to years later, as a young farm girl, Emmy, is about to turn 18; she has been having recurring nightmares, while also exhibiting signs which suggest that she herself possesses powers akin to the deceased witch.

The execution of the first issue is really spot-on. Bunn frames the story well with narration that feels personal, even though it is not entirely clear who the narrator is – ultimately, this gives a very literary feel to the book. At the same time, he introduces us to a very limited set of characters, allowing us a glimpse at the mystery behind Harrow County, and the lingering fear of a curse that the witch left at her demise.   There is a definitive feeling of dread throughout the issue, which Bunn plays with as he juxtaposes a sinister aspect to the town against the overwhelming naiveté and good will of Emmy, who can tell that something is wrong, though she is unable to identify it, and is infinitely trusting of her father and neighbors, unaware that they may be plotting ill for her should she demonstrate the witch’s abilities. Beyond this, Bunn plays with themes of morality and responsibility, as well as the hypocrisy of the townspeoples’ willingness to ignore the troubling aspects of witchcraft so long as they can reap its benefits; this is a nice allegory to broader societal concerns and should serve well as a foundation to the series.

Tyler Crook’s artwork also bears mentioning, as it is subtly striking and plays in an whimsical, almost child-like style at times, which only serves to highlight the truly horrific and grisly moments of the issue. Crook uses watercolors – akin to Matt Kindt’s work in Mind Mgmt – to craft the rustic feel of the story, shifting nicely between gentile scenes of country life to unsettling and horrific scenes at a moments notice, but always keeping a coherent sense of story. As a whole, the first issue comes together nicely as it portends a subtly (and, at times, overtly) disturbing series with thematic intrigue and underlying mysteries that are sure to grow deeper by the issue. 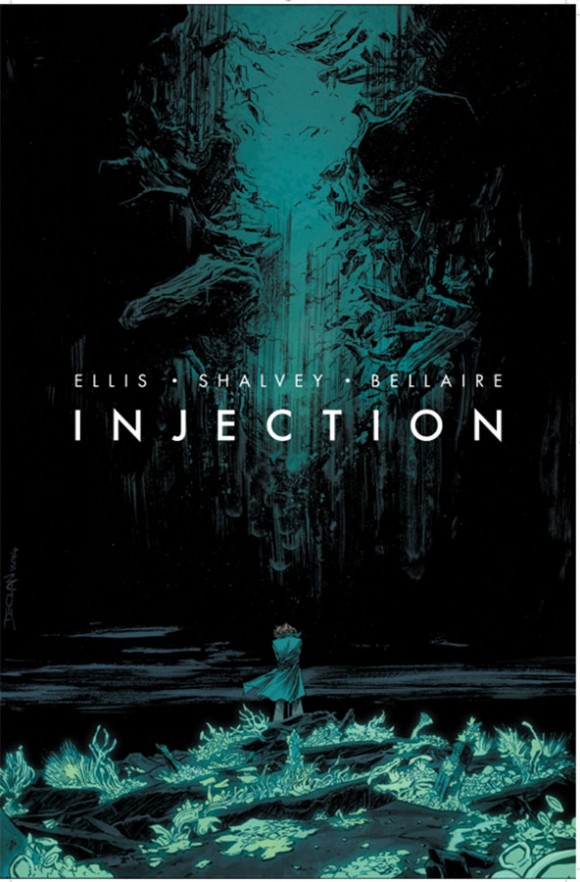 At this point, any time Warren Ellis announces a new title, people get excited, and for good reason, as his work is, at a minimum, consistently compelling. Injection is Ellis’ newest series from Image, in which he reunites with artist Declan Shalvey from his run on Marvel’s Moon Knight, and is also joined by colorist Jordie Bellaire, who works on more titles than I could possibly keep track of.

Injection centers around five individuals who were part of a think tank, brought together by the British government, in conjunction with a private company, in the years leading up to the first issue. It is unclear what the purpose of the think tank is, or what exactly it accomplished, although the issue hints that they ultimately developed an injection which left its users with extraordinary abilities, such as precognition or telekinesis. Even less clear is what happened in the build-up to the first issue, at which time the think tank is splintered, and it is hinted that the end-product of its work was some pre-apocalyptic catalyst (Ellis has also said as much in interviews).

While there is a fair bit of explanation in the issue, it only scratches the tip of the story, as Ellis has so much going on that it isn’t possible to fully grasp the series’ scope right off the bat. Thematically, Injection incorporates much of what could be considered classic Ellis: it is character-driven, hinged on a world-defining event, socially critical, and weird.  The character-centric focus will be emphasized by the book’s format which, while dubbed an “ongoing” title, Ellis has indicated it will be a five-volume story (no word on the length of each volume), with each volume told from the perspective of one of the five principal characters. The ultimate take-away from the first issue is that it is something akin to Jonathan Hickman’s Manhattan Projects, as it brings disparate scientists together to work in the intersection of government, private industry and academia while also relying heavily on reader uncertainty, although Injection is far headier and much more tightly wound, and has a clear narrative arc that is building.