It’s Wednesday, which means some more great comics, including a trio of number ones from Boom! and Image Comics. 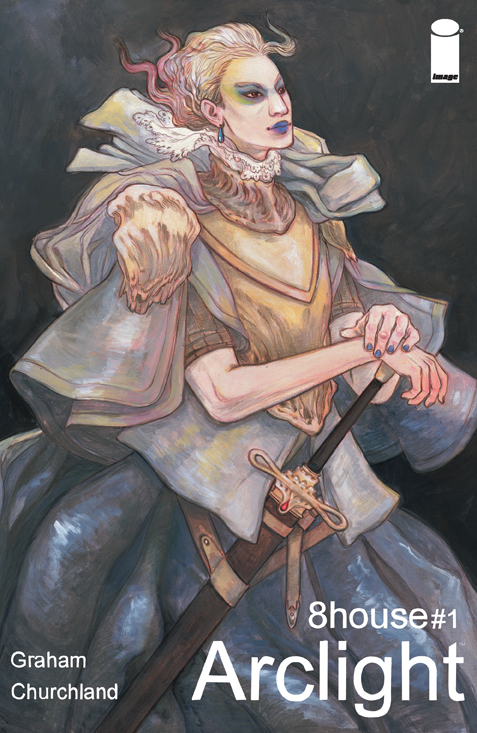 Brandon Graham first announced 8house at 2014’s Image Expo, describing a series that would be a conceptual novelty in many ways, comprised of a number of shorter series set in a fantasy world that is subject to the control of the titular eight houses.  Building off the the collaborative elements of Graham’s Prophet, which featured a routinely revolving and evolving cast of creators, 8house was announced as a collective exercise, with different artists taking their respective hands at each of the different series, while Graham and Emma Rios sharing writing duties.  Almost a year and a half later, the first issue of of the initial 8house installment — subtitled Arclight — finally came out this week, with Graham taking on writing duties and veteran artist (and Graham’s longtime paramour) Marian Churchland providing art.

In broad strokes, Graham’s writing for Image can be categorized into two distinct styles, with, on the one hand, King City and Multiple Warheads having a distinct urban style steeped in Graham’s trademarked witticism and puns, and, on the other, that  found in Prophet, which takes on expansive sci-fi and fantasy elements mixed with a concise writing style focused on world building and immersion.  Graham is fond of dropping a reader into his fully rendered worlds and avoiding unnecessary explication, serving to make these worlds all the more mysterious and strange to the reader.  8house unequivocally fits into the latter category and evokes a strange and foreign land of bizarre creatures, magic, quests and adventures.  The world itself is in many ways more of a character than any individual in the story, a necessity given that it will be the constant throughout each of the 8house sub-series; it is a place of high fantasy, a mixture of urban chaos and broad open landscapes, with striking ancient elements — a giant wall cutting through the landscape which demands payment of blood to pass and anachronistic Elizabethan dress — and a culture that synthesizes science and magic.  All of this is expertly rendered by Churchland, who uses subtle dusty earthtones to set the mood for the world and series — melancholic, mysterious, and ancient but simultaneously modern — which is periodically punctuated by bursts of vibrant color.

The inaugural issue is much more about ambiance than story as it builds a distinctive feel and introduces us to supposedly principle characters, but only briefly focuses us to the principle storyline.  This issue introduces us to Sir Arclight and a character dubbed the Lady, a tentacled creature who we learn was once human, but lost her body for reasons unknown. Arclight is self-assured character and revels in city-life, a prototypical roguish Graham character, while the Lady is more reserved, comfortable in the wild rural lands and skilled in magic. As the issue progresses, it becomes apparent that the Lady’s original human form has been located, and returning her to this initial state appears to be the focus of the this this 8house sub-series.  Ultimately, the opening issue is an excellent prelude to the balance of the series to come, and although it does little to press a story forward, it revels in taking time to build and set the stage for the remainder of the series, laying the ground work for any number of strange and exciting stories that might come from Graham’s mind as the book moves forward. 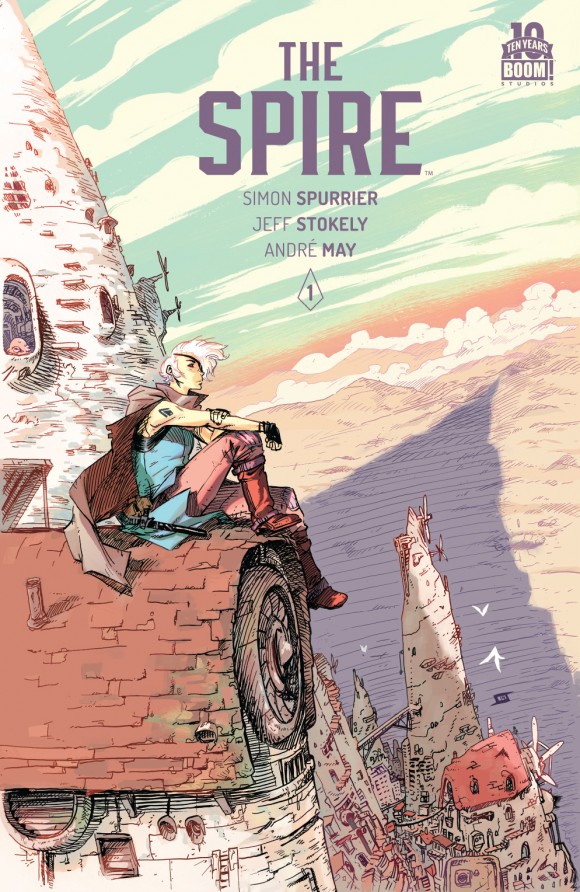 The Spire, a six-part mini-series by Simon Spurrier and Jeff Stokely, is a dystopic fantasy with a beautiful and sweeping and art that screams of the work of Moebius and Hayao Miyazaki’s Nausicaa of the Valley of the Winds, which is excellent company to keep. The book tells the story of a large, multi-tiered city that funnels up to a long spire, which serves as the fulcrum for a broader society comprised of various disparate tribal groups spread throughout the perimeter regions surrounding the Spire. It is a stratified world, both based on social standing derived from one’s tier placement in the city, and on their very genes, as a number of races inhabit the Spire, including apparently genetically modified individuals referred to as “skews” or the “sculpted.”   The story itself follows Sha, a “skew” who is, apparently, the last of her kind, as she investigates a brutal triple murder occurring on the even of the coronation of the Spier’s new Baroness.

The Spire is, first and foremost, visually striking.  The world that Stokely has created is one of the most impressive that I’ve seen in a long time.  And much like 8house, The Spire takes its time to craft this world, drawing the reader in and letting the scenery and socio-political elements of this society play out, while developing the story at its own pace.  Beyond this, however, Spurrier creates an impressive protagonist in Sha, who is strikingly comfortable in her own skin, and with the fact that she is ultimately very alone in her world; she is resilient and simply bad ass, with visually impressive gossamer-thin tendrils that she is able to control at her will.  This is a very enjoyable read and the only complaintso far is that the series is only slated as a mini-series, which hardly seems sufficient to give the world created by Spurrier and Stokely its proper due. 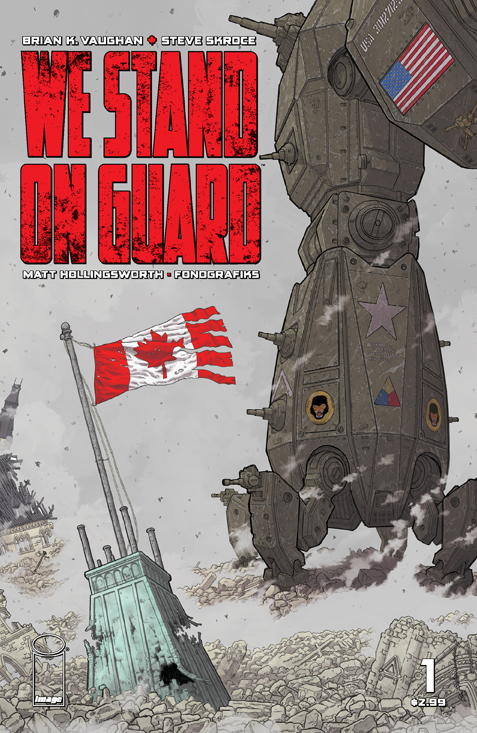 Few writers have set the bar as high for themselves as Brian K. Vaughan. At this point, it’s pretty much undisputed that Y: The Last Man is one of the finest comics of the last decade and a half, Ex Machina was well regarded in its own right, and Saga is probably the most critically acclaimed series currently being published. This of course sets expectations high for any of Vaughan’s new work.

We Stand On Guard, a new mini-series from Vaughan, may be a victim of these high expectations. The series is set in Canada in the 22nd Century, after the United States invaded and subsequently occupied much of the country’s territories, substantially though an occupying force of giant robots. As with his prior works, the series is high-concept, with a dramatic backdrop and apparent but not-so-subtle political ruminations. But while the first issue of We Stand On Guard is a fine book in its own right, it labors under the baggage of Vaughan’s past work, and in particular his explosive first issues, which consistently have stood out for Vaughan’s unique ability to build well-rounded and endearing characters in short periods of time.  Despite taking on a very heady premise, We Stand On Guard feels somewhat less compelling that his other works, principally because none of the characters introduced have the immediate relate-ability of so many of Vaughan’s other characters.