Comics Pros on the Lasting Influence of DARK KNIGHT RETURNS

UPDATED 1/27/19: Frank Miller turns 62! I first published this for The Dark Knight Returns’ 30th anniversary and in anticipation of Dark Knight III. Today’s a perfect time to present it again. Enjoy. — Dan

It’s DARK KNIGHT WEEK: Dark Knight III is out next week and evidently it’s not even the end of the story, as Frank Miller both embraced and (kind of) distanced himself from the new project in an interview with Newsarama. If it were up to me, it all would have ended when Bruce told Carrie to sit up straight while he laid out his plans for the future.

Alas, it’s not up to me. Too bad, because The Dark Knight Returns was a brilliant piece of comics art. So much so, that I took the opportunity of DKIII’s looming release to look back almost 30 years to the original. I have my own 13 QUICK THOUGHTS about its legacy (which you can read here). But even more interesting is what writers and artists think. So I asked some of the biggest names in the biz three big questions.

They’re back for Part 2, along with major talents like Darwyn Cooke, Phil Hester, Mark Waid and many others, to answer this question:

As a creator, how did The Dark Knight Returns influence you as a storyteller? 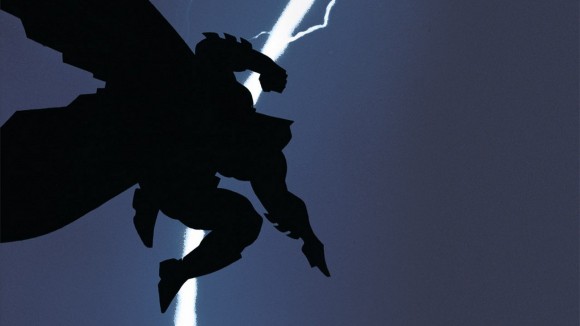 Honestly, DKR had a bigger influence on me than virtually anything else. It was dense and audacious, unlike anything else. The obvious comparison is Watchmen, because they came out at relatively the same time. Now, I adore Watchmen as well, it’s a masterpiece. But if I have to pick just one, it’s DKR. Watchmen is cerebral and conceptual and brilliant, with an unmatched level of craft. But DKR grabbed me by the throat and made me care about the characters. It’s why I always favor character over concept in what I write. I want the audience to be invested in these made-up people. DKR is pure comics. Almost three decades later, I still learn things from it.

If DK influenced me as a storyteller, I would say it was the cinematic approach Frank took. His use of layout, sound effects and scene builds with perfectly timed transitions brought the story to life in a way I’d never seen in genre comics. 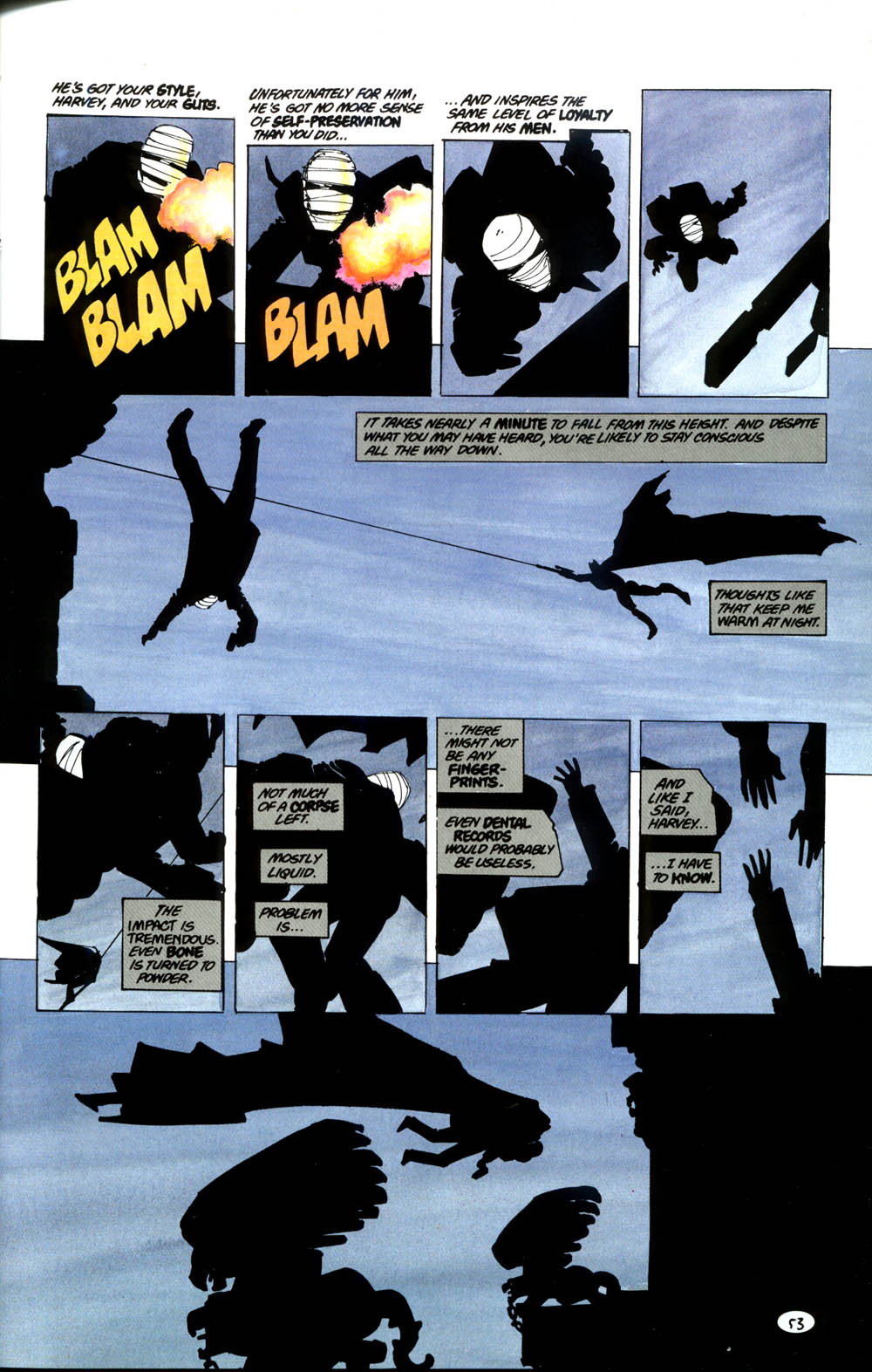 I think, mainly, the cinematic way in which Frank doled out the visual information. You know, bits and pieces that assemble as a whole. Showing without showing, as in the case of a pair of sunglasses left floating midair after Batman takes out a mutant. So cool! And, there’s nothing mundane about even the quietest of scenes. Master class in visual storytelling. 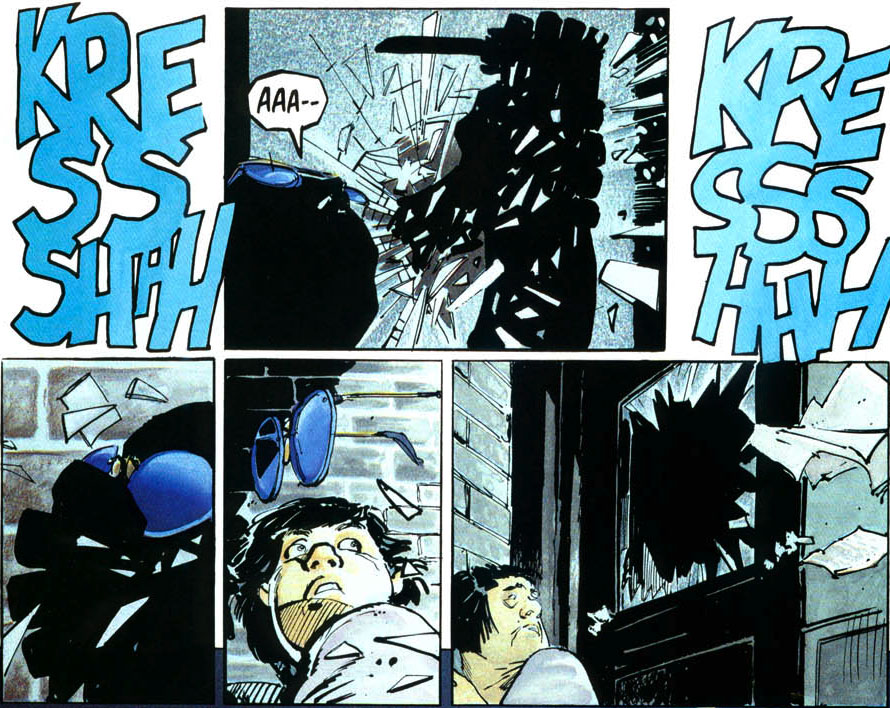 In every way. First it took me on a wide swing from my desire to be a filmmaker. And it began a crash course in comic-book history where I obsessed over the progression of the art form, studied the greats, and completed collections of childhood favorites after being introduced to my favorite place ever: The Comic Book Store!

What Frank did with the storytelling was incredible on every level. Pacing, page layouts, raw unconventional rendering. And character itself. Shattering icons to their core. Ultimately, it showed me the only storytelling rule not to break was to TELL A GREAT STORY.

I was TOTALLY influenced by the art. I thought it was almost abstract, as compared to most classic comic stuff I was familiar with. It opened my mind, but I think to this day I can’t bring myself to try and “do” that Klaus Janson style of inks! It just intimidates me WAY TOO MUCH! It’s rough, but yet it FLOWS … SO NICE! 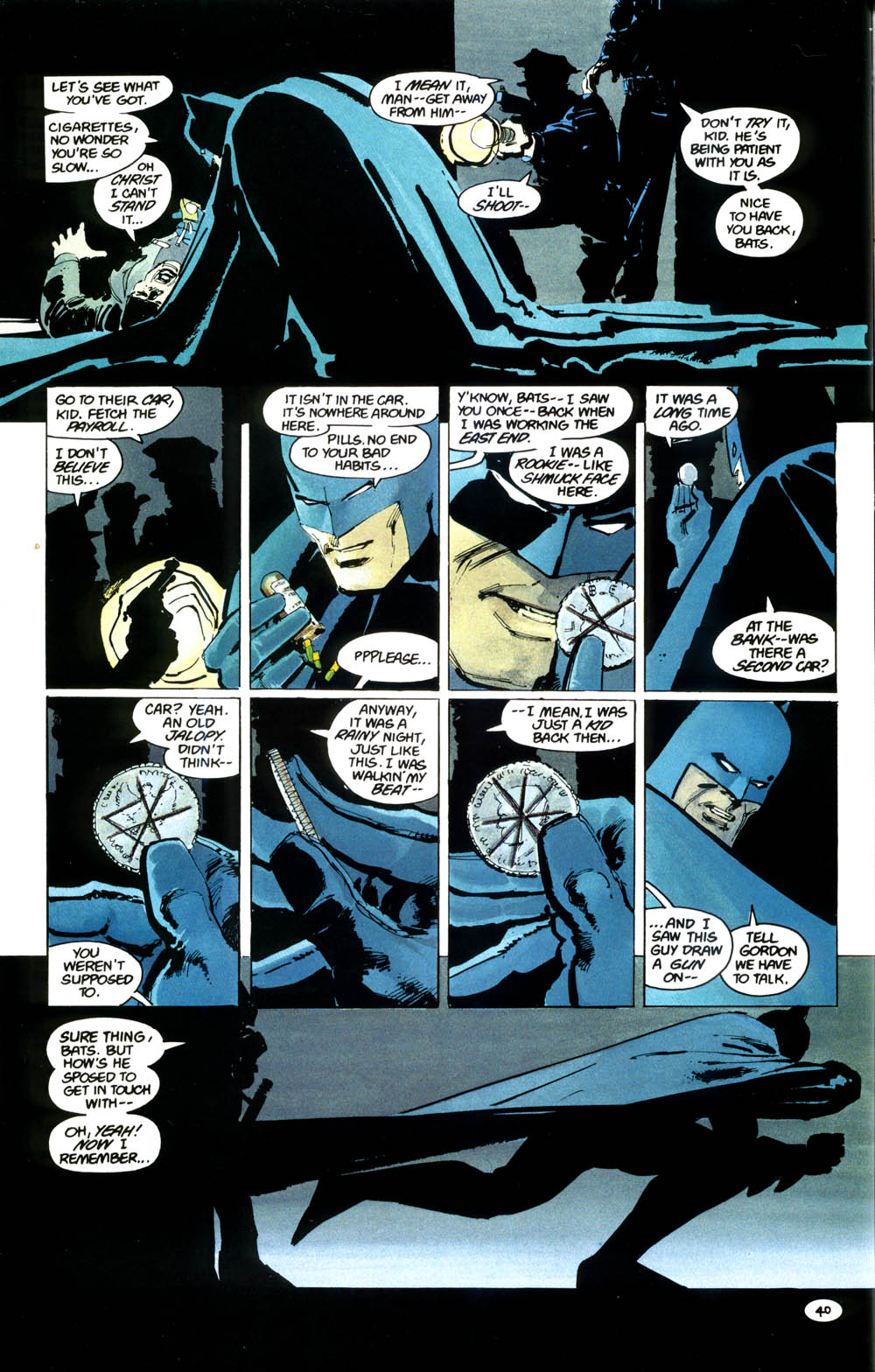 It was definitely one of the major storytelling influences on my development as a comic-book artist. Between Miller’s writing and layouts to Klaus’ striking ink work, I continue to be blown away by this piece of work today.

It sold me on the internal monologue for sure. I had already been a fan of that vertical, Chaykin-style cascading page layout, and, of course, already a student of Miller, but seeing Frank so deftly shift between panoramic vistas and tight action, then almost postage stamp-sized talking heads — panels that didn’t always reflect the narration accompanying, by the way — it really drove home how nimble the comic-book page could be as a storytelling device. 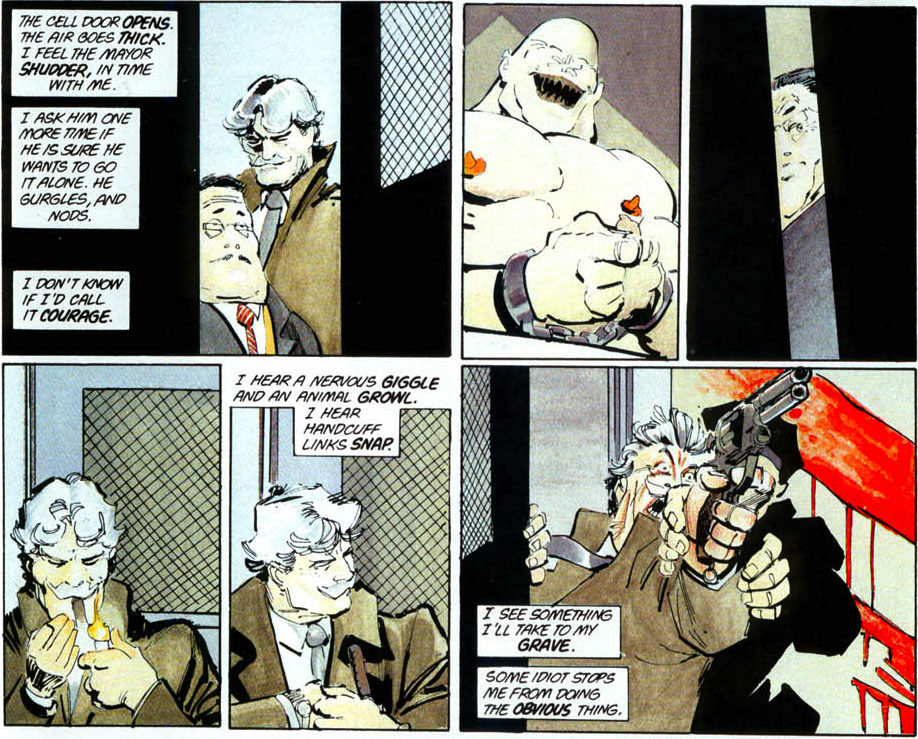 It certainly gave me the confidence as a writer to not “write down” to a presumed audience. It showed me that, yeah, adults will take this material seriously if you deliver it in a mature fashion — which, in 1986, was a wholly unproven hypothesis!

I enjoyed it as a reader primarily back then — it was only later that you learnt about the craft behind it — the 4×4 grid system, the splash-pages-on-left-hand-side planning,  and so on. But there’s every likelihood a lot of it seeped into the brain on a subconscious level, given how many times I read and re-read it.

It’s strange — I got to meet Klaus Janson last month during a special DC workshop in Los Angeles. But somehow there was a disconnect between knowing he worked on the book and the book itself — almost as though it’d taken on its own life. I suppose that too is a result of how long I’ve had it on the shelves.

I used a lot, I mean a lot of TV panels early on. Like a lot. Also, the first comic I ever did, with my buddy Steve Ellis, Tranquility, had a host of crazy gangs on this moonbase (my favorite were the Whigs) definitely influenced by the Mutant gang, and the Bat-gang, and the Joker-gang. 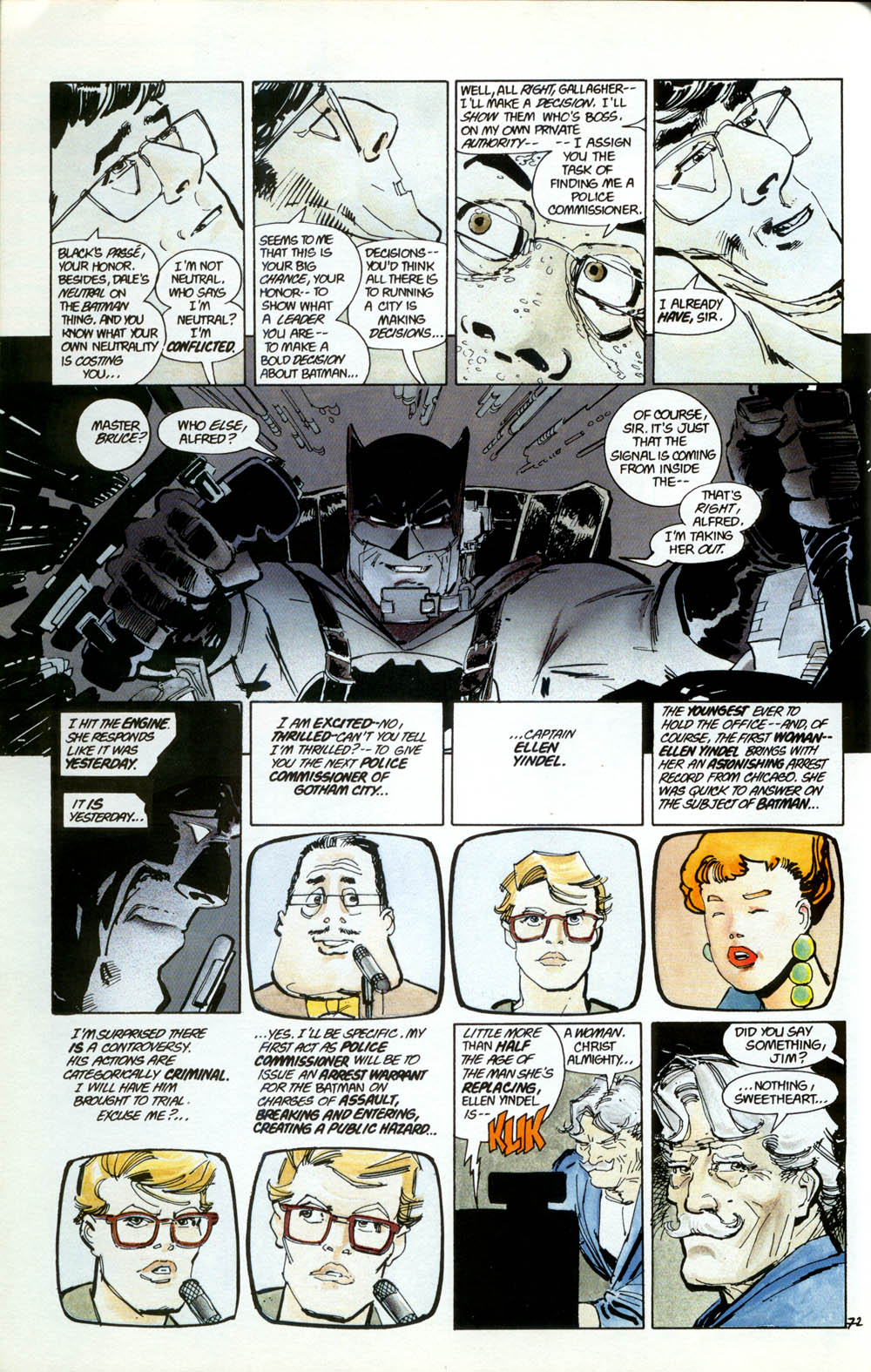 I’ve borrowed a lot of little things from Miller over the years but my biggest takeaway from DKR was the idea that comic books were not a limited medium for storytelling. Watchmen had the same effect on me. Both of those books showed me that you could tell powerful, epic stories with something important to say using the medium of comics.

Miller’s use of narration instead of thought balloons gave it a literary sensibility. It created a wonderful bond between the reader and the characters that added so much texture to the story. When the characters narrate senses beyond sight — what they smell or how something feels to the touch, those lines really stuck with me. It inspired me to want to create a comic that evoked that kind of immersive sensory experience.

It continues to influence me! But #426 of The Incredible Hulk clearly shows Miller’s influence on my layouts — mostly structured around a 16-panel grid. Even my Gears of War work from 2008 shows that influence.

I’ll never stop being inspired by it. But it’s not just the art, it’s the writing. My script for MONO: The Old Curiosity Shop (just collected in hardback from Titan/Madefire) may not at first seem related to DKR, but the juxtaposition of word against image absolutely has it’s root in Miller’s work. The same can be said for my magnum opus Captain Stone is Missing (also in hardback from Titan/Madefire), particularly in the news reportage.

It influenced me greatly as a creator…because it opened up the art form for so many new ideas…the TV panels, the big splashes that punctuate the story, the rawness of the inking mixed with the sophistication of the colour…the use of silhouettes and linework. Man, all of it influenced all of us. It was a watershed.

It (along with Watchmen) helped comics “grow up” in that decade, for better and for worse. For better because we suddenly got adult writing and better stories, for worse because brutality, nihilism and sadism became standard fare instead (of) rarely dealt-with subjects. Comics became “dark and gritty” and frankly, “dull and mean” for decades to come. 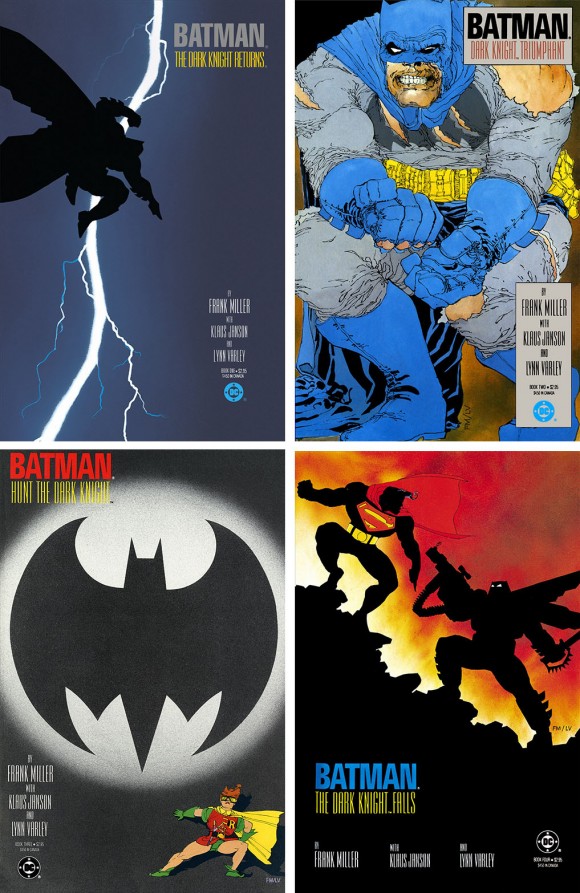