G.D. Kennedy takes a look at a couple of this week’s titles from Image, as well as Boom! Studios‘ new series Arcadia. 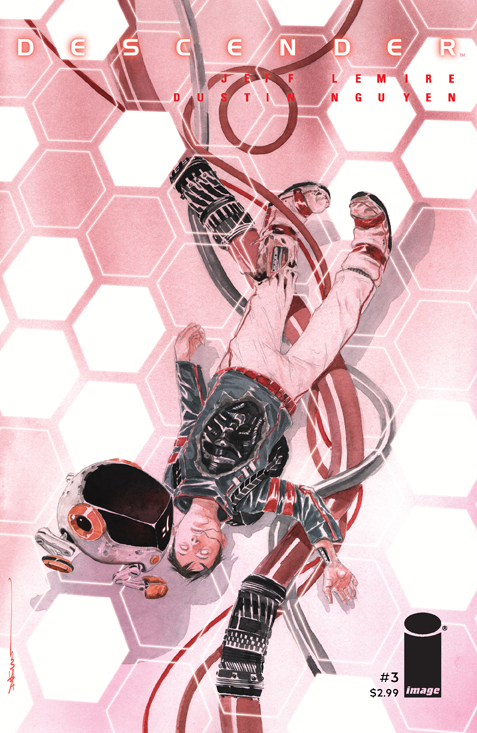 Over the past 10 years, Jeff Lemire has carved out a nice career for himself, both through his work through on DC’s more established characters and, maybe even more notably, through his independent and Vertigo titles such as Sweet Tooth. Lemire’s strengths have always best veered towards the strange and unusual, and typically manifest best in more traditional sci-fi; one of his most under-appreciated works is his 2013 mini-series Trillium, which played with concepts of time travel and aliens.

Descender feels much like a thematic extension of Trillium, as it utilizes traditional science fiction themes to craft a character-driven story aimed at forcing the reader to reflect upon himself and the world in which he exists; in this way, the story is very much classic Bradbury or Asimov. The story takes place after an attack on the alliance of planets, known as United Galactic Council, by massive and mysterious robots – the Harvesters – that efficiently decimate the vast majority of each planet’s population. The resulting world is a bleak version of the prior utopia, that includes, maybe most aptly for the story, a severe backlash against the robot population of the planets: where robots, imbued with advanced AI, had previously been a part of daily life and, often, family members and companions, they were quickly culled.

It is against this background that we are introduced to Tim-21, a robot boy with advanced AI who has been stranded on a colony on a remote world years. Tim-21 wakes from lengthy stasis only to find himself alone, his family and the rest of his colony mysteriously dead, and he is completely unaware of the Harvesters and the destruction of the robots. Issue #3 opens with Tim-21 in near-total system failure after sustaining a grievous injury from a group of scavengers who attempted to harvest him for parts. While he undergoes repair, Tim-21’s mind wanders to something that can only be described as robot limbo, as he becomes somehow becomes connected with the “souls” of the robots that were culled years before.

Issue #3 reads like a direction post for the series, portending that while the series intends to reflect on the nature of humanity and its relationship with the world constructed around it, Descender will be delving into even deeper thematic territory, although, at this point, we are only peeking through the keyhole of what Lemire has in store, and where he intends to take us is not entirely clear.

Lemire’s writing so far has been consistently spot-on, and his use of a child-robot such as Tim-21 adds a nice element, as the character necessarily has certain dependencies and immaturities that lend well to exploring the broader themes in the book. Despite that Tim-21 is a robot, Lemire has done a nice job of making him very human: Tim-21 much loves the family with which he had lived, considered the matriarch his mother, and has a close bond with a robot “dog” that is his own.

Of course, this series cannot be discussed without mentioning Dustin Nguyen’s art, which is simply fantastic. Nguyen uses watercolors to create images that are subtly complex, vacillating between airy and open spaces that capture the isolation of space and hectic and cluttered to emphasize the post-Harvester chaos of the Council planets. The end result is an impeccably rendered comic with an intriguing and slowly burgeoning story. 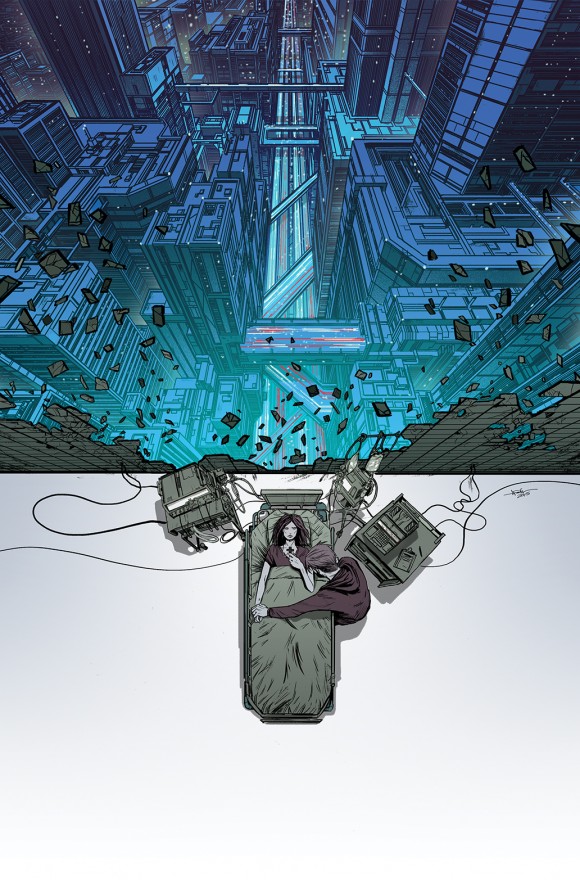 Arcadia offers an interesting play on traditional post-modern themes. The basic premise is that as the Earth is ravaged by a disease causing almost 7 billion deaths, a stop-gap measure is taken to download the minds of the dying into a massive computer-simulated world, named Arcadia (presumably a nod to the painting, Et in Arcadia ego, and Grant Morrison’s The Invisibles), that ostensibly models the real world. The physically surviving members of humanity are left to maintain the massive servers required to house this data and operate its system, procure resources to satisfy the servers’ heavy energy demands, and maybe even attempt to cure the disease before it wipes out the last few survivors.

The idea of humans bound to a computer-simulated world is obviously not new, and maybe the most obvious comparison is to The Matrix, but industry newcomers Alex Paknadel and Eric Scott Pfeiffer take a new approach with Arcadia, inverting the master-servant dynamic the predominates so much post-modern fiction – in fact, it is not entirely clear who has the power or who is serving whom – while also having each of the characters wholly aware of the broader system in which they live. There is no pretense that Arcadia’s residents are unaware that they are living in a computer simulation; to the contrary, this is integrated into their lives – insurance policies provide for the ability to reboot destroyed houses – and is routinely exploited as people learn to fly, or reboot damaged bodies and property.

Of course, there are hints at limitations in the world as well, such as poorly rendered emotions, and potential glitches which may be taken advantage of. There is also an interesting take on socio-economic dynamics, as even in the simulated world of Arcadia, resources are nonetheless subject to economic principles, with the wealthy able to purchase, for instance, body modifications or “material” items, while may not even be capable of affording sufficient pixels to maintain their bodies.

This is a novel take on the idea of human nature, namely that even in extreme circumstances, we nonetheless bind ourselves to the limitations of capital and social hierarchies. Ultimately, Arcadia looks poised to be a compelling story – another success by Boom! Studios, which has been doing quite well coming into its 10th Anniversary – and, at a minimum, is a promising start for two new industry talents. 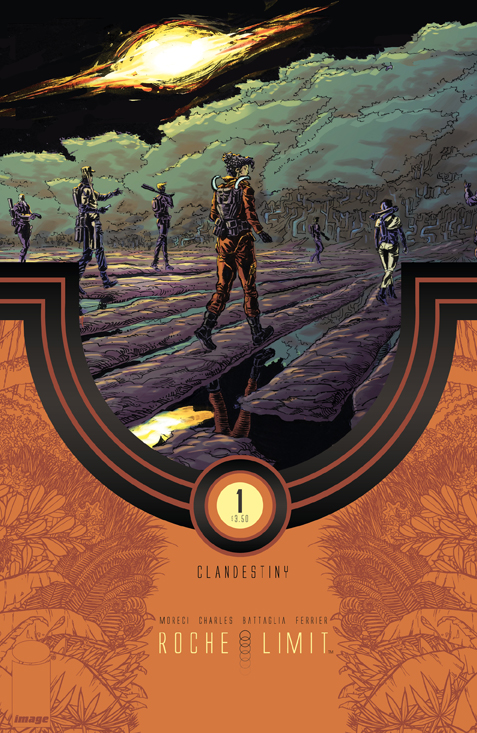 Of the various space-noirs that have populated Image’s titles over the past year, the initial five-issue run of Roche Limit from co-creators Michael Moreci and Vic Malhotra was a pleasant outlier, offering a heady mystery in the face of a growing trend of space Westerns and cop stories. It was a dark tale about an isolated colony on a distant planet that was pegged as a ideal heaven, but, instead, devolved into refuge for castaways and convicts, ultimately becoming the source for a drug epidemic — resulting from toxins from a space anomaly hanging above the planet — which left its users literally soulless husks, prone to violence and easy control. The first arc ended in what can only be described as a purge, as the story’s protagonists fled while the colony burned.

Roche Limit: Clandestiny launches the second arc, with Kyle Charles taking over art duties on Issue #1 from Malhotra, with the story jumping ahead 75 years and introducing a new set of characters, military and science personnel who arrive at the decimated and purportedly deserted Roche Limit colony on a dubious mission. The first issue of this new arc offers little in the way of what the story will be, instead presenting a mystery about the underlying purpose of the mission and what has happened to Roche Limit in the interceding years. One of the most effective elements of the first arc was the ominous tone set by Moreci and Malhotra, which carries through to this new arc, with Charles effectively in for Malhotra on pencils.