I had a great time at the Comic Book Men season 3 premiere party on Sunday night. After watching the premiere of Walking Dead, Judie and I walked around the block from our home in Red Bank, NJ to join friends to watch the premiere of Comic Book Men season 3. During the show, I sat with Robert Bruce and sound man Tom Mumme. We talked about how tight the show had become — great edits, punchier dialog, and a lot funnier. Rob and Tom talked about how the crew has been together for a few seasons now, they work well together, they’re just sharper on everything. It really showed.

A guest appearance by former Hulk star Lou Ferrigno was humorous and touching. Ferrigno talked about being made fun of as a kid for for his handicaps. Ferrigno showed up to whip Bryan Johnson into shape, and at one point Johnson produced pictures of a much thinner version of himself from only a few years ago. I felt the show was going into a much deeper level of who the Comic Book Men are. 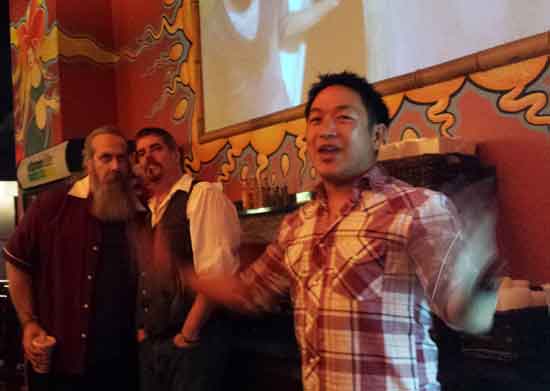 Bryan Johnson and Michael Zapcic pose for me as Ming Chen thanks everyone for their support just before season 3 premiered.

Keeping with that theme, Michael Zapcic, Ming Chen, and Bryan Johnson, gave us a heartfelt thank you to all friends, family and fans. Johnson’s was especially moving, since we usually get the gruff version of him. Absent was Walt Flanagan, who’s not one to publicly bask in the popularity he’s had because of the show. Walt seemed especially comfortable on the season’s premiere and having a lot more fun.