There’s time for one more comics gathering this year  — the Brooklyn Comics and Graphics Festival, I mean the Comic Arts Brooklyn (CAB) is this Saturday. See, there used to be some other people involved and now, co-founder Gabe Fowler of Desert Island Comics in Brooklyn has carried the torch of the old show (under a slightly different name) and that’s great for comics and Brooklyn. 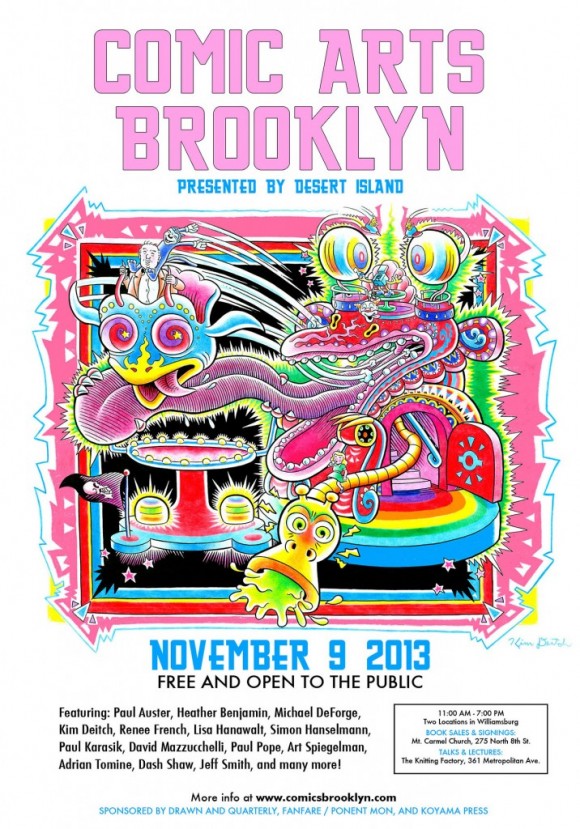 Despite it’s acronym, CAB is a CAF, like TCAF (Toronto Comic Arts Festival), Stumptown, MoCCA, SPX, and APE. The emphasis is on art and emerging artists rather than cosplay and Stan Lee autographs. CAFs are generally free or very low admission compared to what we’ll call a con. So leave that Wolverine as a Ghostbuster costume home, this show is about the art and the artists. It’s about indie, self-published, mini-comics, handmade comics, prints, some hand-screen-printed T-shirts, and other precious offerings.
So while CAFs celebrate the new and unknown, they do rely on big names from the indie, underground, or ex-mainstream  corner of comics to draw attention to the event and celebrate the rich history of comics that somehow gain popularity and praise without dressing their characters in tights.  Confirmed guests include author Paul Auster, Paul Karasik (The New Yorker, RAW), David Mazzucchelli (Asterios Polyp), Paul Pope (Battling Boy), Jeff Smith (Bone) Art Spiegelman (Maus), and Adrian Tomine (Optic Nerve).

There are also panels, films and an after-party at Union Pool.

Held at Mt. Carmel, the past shows were the most fun I’ve ever had in a church. When I attended, the weather was great and there were always throngs of comics lovers sitting on the church steps reading and talking comics.