Captain America Scares the Pants Off Us

Home » COMICS HISTORY » Captain America Scares the Pants Off Us

This Fourth of July is the perfect time to celebrate that All-American Hero, the Star Spangled Avenger, the Guy with the Wings on His Head, Captain America!

Perhaps more than any other comic book hero, Cap embodies the sense of hope against terrible odds, a guy who never gives up, who will fight to his final breath. He’s an inspiration to all of us to do the same. It’s difficult, then, to imagine a comics story where Captain America scares the pants off us. What would compel the Man in the Red, White and Blue to appeal to our senses by shocking us all? And, as it turns out, scaring the pants off of Bucky? (Note: Bucky’s pants not literally scared off.) 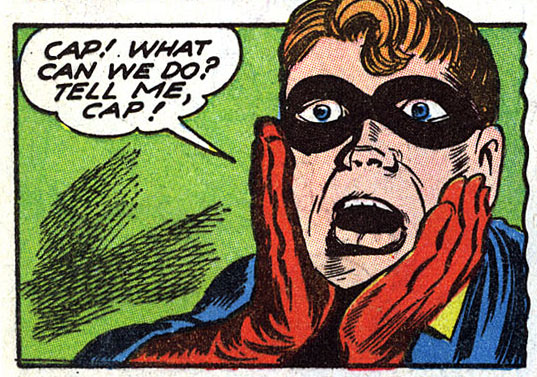 For the answer, let’s turn to the Golden Age’s CAPTAIN AMERICA COMICS #19 (cover-dated October 1942). The issue is 68 pages (all in color for a dime!) of various Cap stories, any of which might give us images with which Cap would make us shiver with terror. Could it be the blood-chilling sight of a horse spitting all over Steve Rogers? 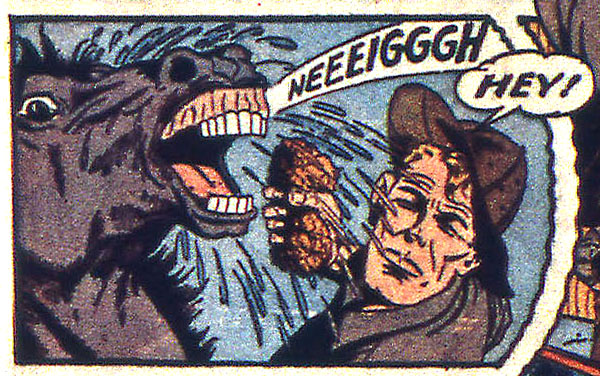 Maybe it’s the terrifying experience of fighting a killer crocodile?… 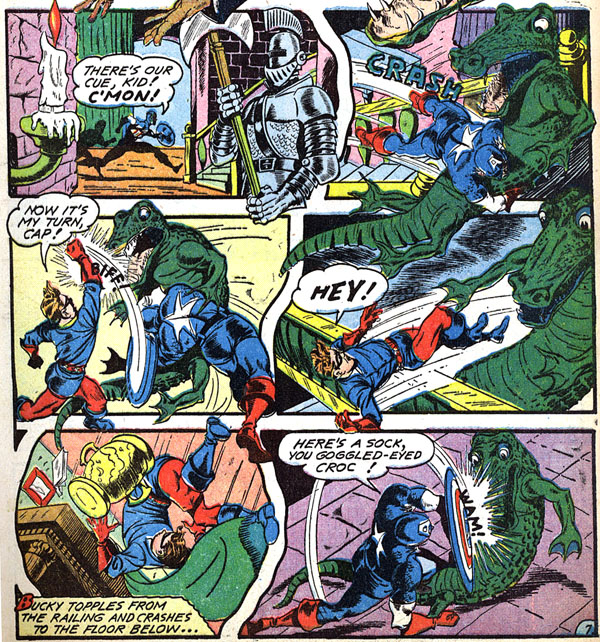 …a crocodile with a knife! 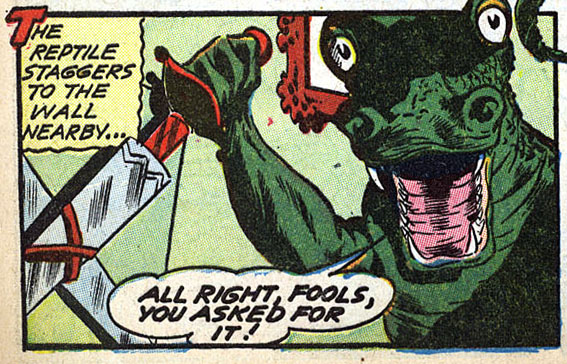 Look out, Cap! That croc has a gun, too! 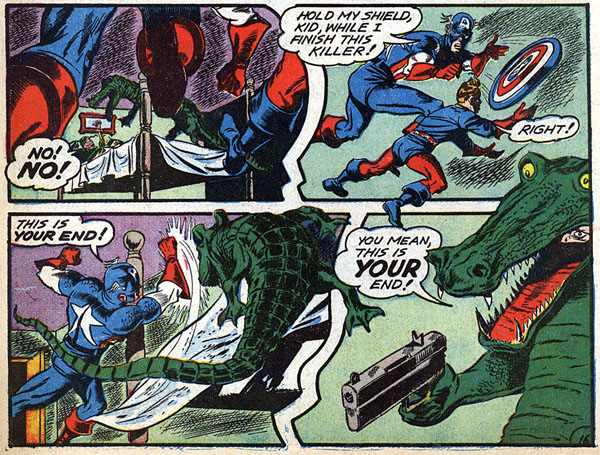 Of course, you ‘n’ me (and Steve Rogers) can clearly see in the last panel that croc is nothing more than a guy in a rubber suit. On the next page Cap pulls off the mask to reveal the old caretaker of the abandoned amusement park, who declares that he would have gotten away with it, too, if it hadn’t been for that meddling Star-Spangled Avenger and his sidekick kid. Well, if it wasn’t the larger-than-life reptile, perhaps the most frightening thing in the book is the sight of Steve and Bucky pulling the most extreme case of K.P. (kitchen patrol) ever seen in the Army until Beetle Bailey was enlisted in 1950. 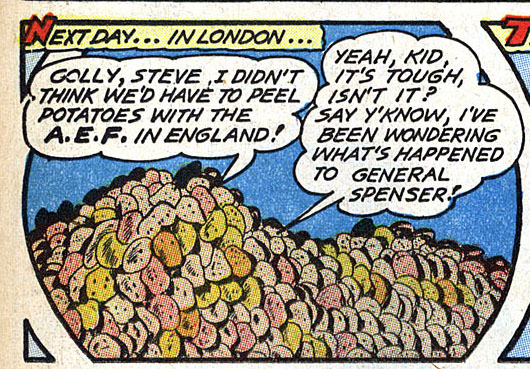 Even death by spud, however, is no match for the specific spine-tingling scare Cap has planned for us, which is headlined by the cheery, upbeat title of “Your Life Depends on It!” If I were Bucky, though, at this point I’d be frightened that since I didn’t have a logo of my own in the header, I might just be dispensable.

The story begins in the usual Captain America fashion: with our two champions in red, white, and blue knocking the stuffing out of a pair of spies, or black marketers, or maybe just two guys who had the misfortune to buy really garishly colored suits. Green pinstripes…really?

Once again, though, that’s not the frightening bit. Cap prepares to tell us all what it is we should be scared of. (It’s not his weirdly crossed eyes, either.) 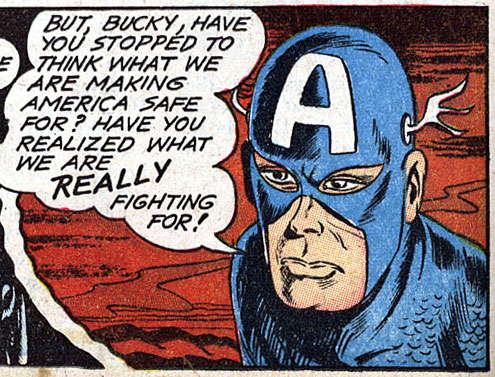 It is, of course, the threat of the Axis Powers in these early days of World War II that we should be concerned with, and the sight of Hitler driving his gigantic feral fire-breathing hounds across the Atlantic Ocean to attack America ought to make you quake in your boots where you stand. Al Avison has done his job portraying this well, because geez, that’s terrifying. 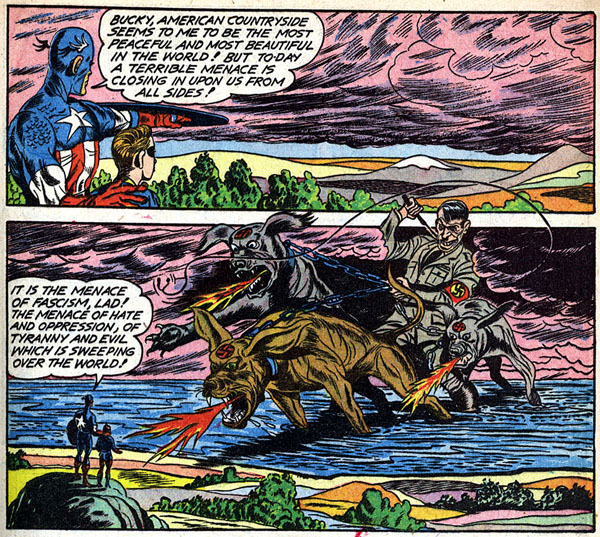 From the west, equally immense and horrific, the colossal-sized Prime Minister Tojo of Japan attacks with fleets of ships and planes, not to mention giant lightning bolts in his fists. 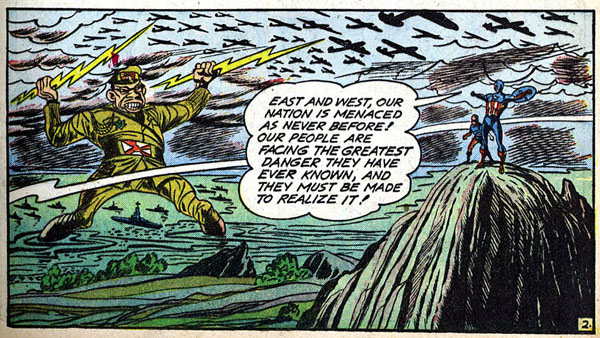 It’s truly the stuff of terror and the images have a chilling effect even in the modern day. The technique of brutal, misshapen caricature was not a new one even at the time — it originated in the mid-18th century and the popularity of it as a cartooning shorthand exploded into popularity during the French Revolution.

It’s difficult for a modern-day audience to comprehend some of these portrayals — the Japanese as buck-toothed, evilly grinning apes, for example. While such portrayals shouldn’t necessarily be accepted, they definitely need to be understood within the context of their times. In this case, the propaganda of Lee’s cautionary script and Avison’s frightening artwork perform exactly what was intended: that the Nazi and Japanese Imperial armies must be defeated to save our lives and freedom. Lee and Avison succeed in exactly the same way Cap does in chilling the (mostly younger) readers of the comic book in imagery so monstrous it still inspires a visceral panic and dread today.

It’s both appropriate and inspiring, however, that Captain America, champion of freedom, can offer the terrified Bucky (and us) the chance of hope and a ray of light in face of such darkness. 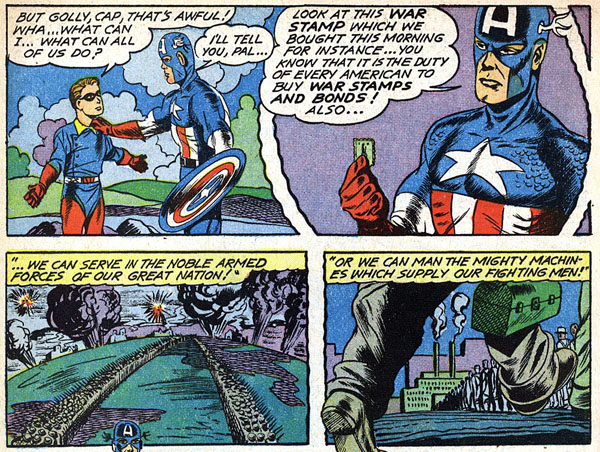 The youth of America — the buyers and readers of Captain America Comics — couldn’t enlist or fight in the war (despite what scrawny Steve Rogers did), nor could they work in the factories that provided weapons for the war effort as non-military adults did. There was, though, plenty that a kid was urged to do to play his or her part in the battle against Hitler and Tojo: saving scrap metal for war materials, helping with a victory garden to reduce the stress on America’s agriculture, or gathering paper that could be recycled in this time of great need. Cardboard, magazines, and newspapers could all be recycled: even comic books, which is one of the reasons these Golden Age comics are scarce. Next time you moan the price of trying to fill in your collection of war-era books, remember that rare comic you can’t find might well have driven the Allies one step closer to victory!

As Cap outlines here, a very important activity –for adults and children alike — was to purchase war bonds and stamps.

Based on the aggressive and successful Liberty Bonds campaign of World War I, the WWII war bonds program inspired 85 million Americans to purchase bonds and raise $185 billion for the war effort. Similar to modern-day government savings bonds, they gave a percentage of return over the initial investment 10 years after purchase. This war defense bond was purchased for $37.50 in 1942 and could eventually be cashed in for $50. 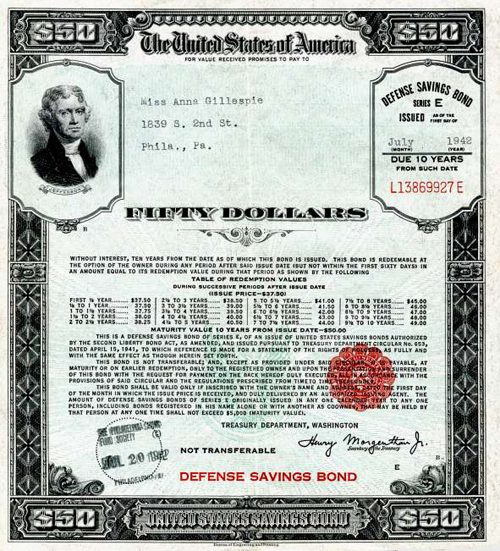 War stamps, geared for a supporter with a smaller budget, could be purchased from the post office and saved up to trade in for a war bond. Here’s a sample of a war stamp savings booklet which, when completely filled in with $18.75 worth of war stamps, could be exchanged for a 10-year war bond worth $25.00. 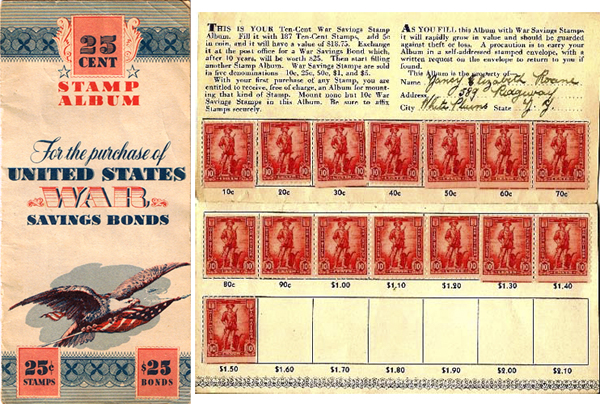 Advertising and promotions to buy war bonds was extensive and ubiquitous. Movies and radio shows of the time reminded you to put aside savings to buy bonds, and there was an extensive range of advertising posters for the program.

Norman Rockwell’s 1943 “Four Freedoms” quartet of paintings published in the Saturday Evening Post, based on Franklin Roosevelt’s 1941 State of the Union speech on basic human rights, were used to remind America of the freedoms they were fighting for — and to buy bonds to support that effort. 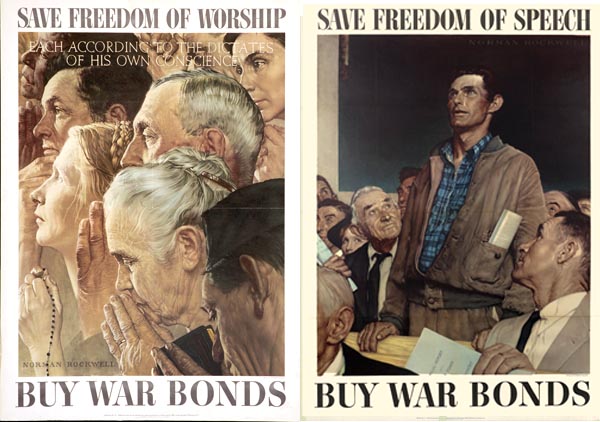 The bond campaign posters ranged from the lighthearted…

…to the grim. Fighting against this terror was, along with patriotism and determination, a powerful weapon against the Axis.

Of course, comics were a considerable part of the war bond campaign. Cartoonist Al Capp’s “Li’l Abner” comic-strip characters promoted both the patriotism and practicality of purchasing bonds — not to mention appealing to a soldier’s libido with Capp’s curvaceous hillbilly sweetheart Daisy Mae as a pin-up girl. 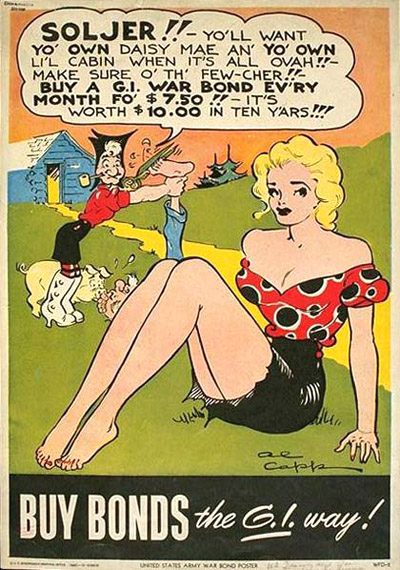 Comic books published throughout the war heavily encouraged the purchase of bonds and stamps through endorsement by their characters, both in stories like the Captain America tale and emblematic covers like these.

The contribution of patriotic comic book heroes to the war effort is so iconic that the concept was used in 2011’s Captain America: The First Avenger movie, in which Cap finds himself tied down to a stateside promotional tour to sell bonds until he breaks out into active action against the enemy. 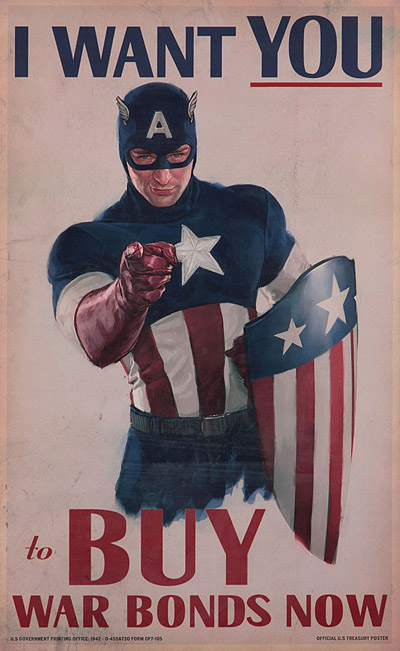 Which brings us back, full circle, to Captain America outlining the war bond plan to Bucky and to the readers of the comic book. It’s a relatively simplistic approach — in Lee and Avison’s tale, US fighter planes spring fully-armed straight from a pile of war stamps — but it gets the point well across. You can help fight the war, you can aid Captain America in his battle by investing in America with your pennies and dimes. 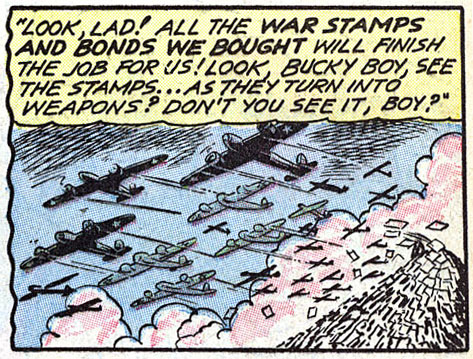 Still, the basic tone of fright, justified as it may be, isn’t forgotten in the final panel of the tale. Cap reminds you, as did war propaganda of the day, that World War II’s victory rests on not merely the armies and the generals but every citizen of America. 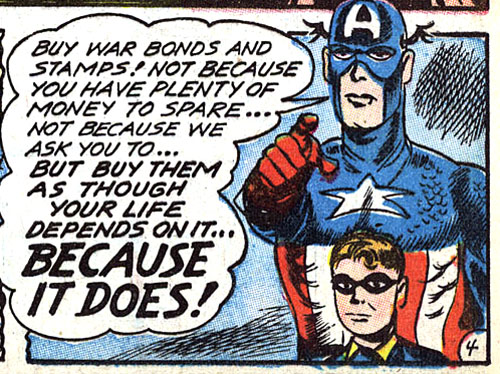 Another story from the same issue gets the point across in a different way with long-forgotten Timely-era kid hero, the Secret Stamp. It’s probably unlikely, but I’m really hoping the Secret Stamp will return in a modern day issue of All-New Invaders, making him finally an official hero of Marvel-Earth continuity. Can his listing in The Official Handbook of the Marvel Universe be far behind? A house ad in Captain America Comics #19 shows that even Timely’s cartoon animal characters were drafted into the war effort. For this vivid image to take place, we must conclude that funny animals also had a World War II. Say, what kind of animal do you think Funny Animal Hitler was? I’m betting he was a skunk. Finally, just in case you slumbered through the whole message, here’s a handy pin-up to get the point across: As one of a relatively small handful of comic book characters that actively attacked the overseas Axis forces, Cap’s frightening fable hits the home front exactly as its creators intended: fight back or die. Like no other government program since, the war bond program and its heavy promotion gave power to the millions of comic book readers who wanted to battle Hitler and Tojo even if they couldn’t join the military like their dads or work in the factories like their moms.

But the fright was balanced with hope and a personal pride of fighting right alongside Steve and Bucky, using their dimes to batter Hitler as surely as Cap used his shield. That’s worth the fright Cap gave us, isn’t it?

Then again, maybe the most terrifying image in the whole comic book is this back cover ad portraying horrible foot fungus. 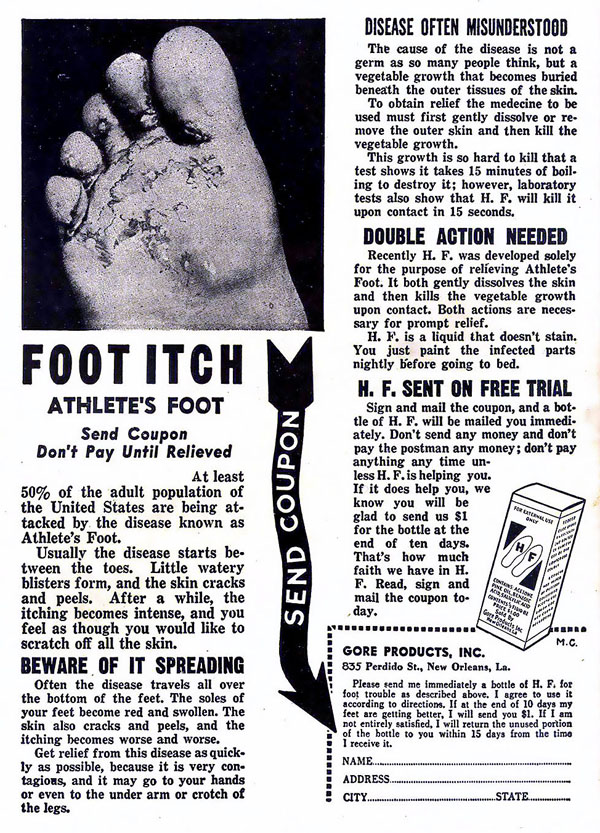