A BIRTHDAY SALUTE: The best of the greatest Boy Wonder…

If you’re gonna ROBIN WEEK, you have to include the greatest of them all — Burt Ward. So here is John S. Drew, host of The Batcave Podcast, with BURT WARD’s TOP 13 MOMENTS AS ROBIN:

When it comes to Batman, there are arguments from many for and against a certain actor’s portrayal of the character and that includes my beloved Adam West, I must admit. But when it comes to Robin, there can be no argument over who offered the best portrayal. Since 1966, that distinction belongs to one Burt Ward. He embodied the youthful exuberance and the physicality of the Boy Wonder in a way that no actor has ever been able to match. When watching others playing Robin, I am of the mindset that the actor is playing Robin. When I watch Burt Ward in the costume, he is Robin. 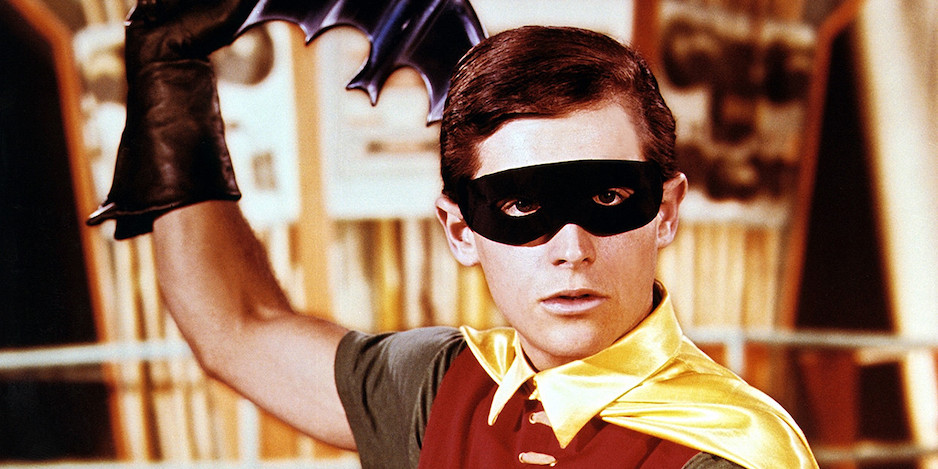 As the host of The Batcave Podcast, I have had the opportunity to speak with Burt on three occasions and to celebrate the opening of the Hollywood Museum’s Batman ’66 exhibit with him. I’ve had the chance to talk with many fans about the series overall and about Burt’s portrayal and that includes your host of this website, Mr. Dan Greenfield. In our discussions, we have mapped out what it was that made Burt the definitive Robin and how it was a shame that at times, the producers missed the mark, especially with entries from the third season.

With that in mind, Dan tasked me with coming up with BURT WARD’s TOP 13 MOMENTS AS ROBIN — not so much a task in terms of finding 13, but actually whittling down all the great moments into only 13. With that in mind, here we go, in broadcast order:

1. Hi Diddle Riddle. In the first season, Robin was truly “the Boy Wonder”. Whenever the Dynamic Duo was up against the Riddler, Robin was the one who solved the riddles. And he is the first to realize when the Duo have been “outriddled.” “Holy ashtray! He did tip us off!” 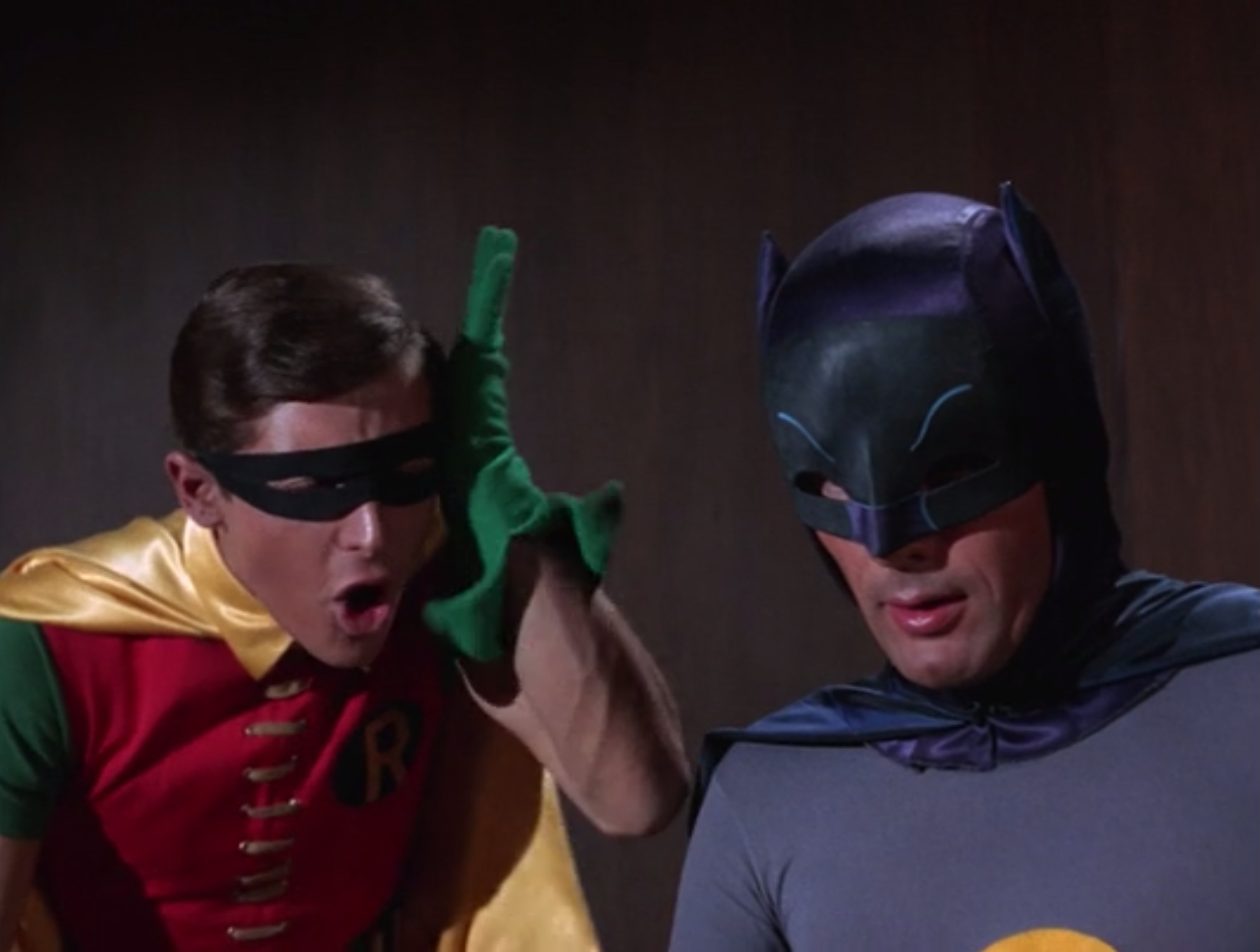 2. A Death Worse Than Fate. One of the nice things about the series was that it allowed Robin to work on his own at times, or vice versa. And it was always fun as a kid to see Robin and Bruce together, as in this first instance where the two have to appear on TV to appeal to Zelda the Great to release Aunt Harriet. 3. Rats Like Cheese. There were times Robin would disobey Batman, feeling he knew better, as in the case with the first Mr. Freeze story. It led to a great use of the cold and hot zones we saw throughout the story and an ending where the two struggled to remain in a thinning hot zone. 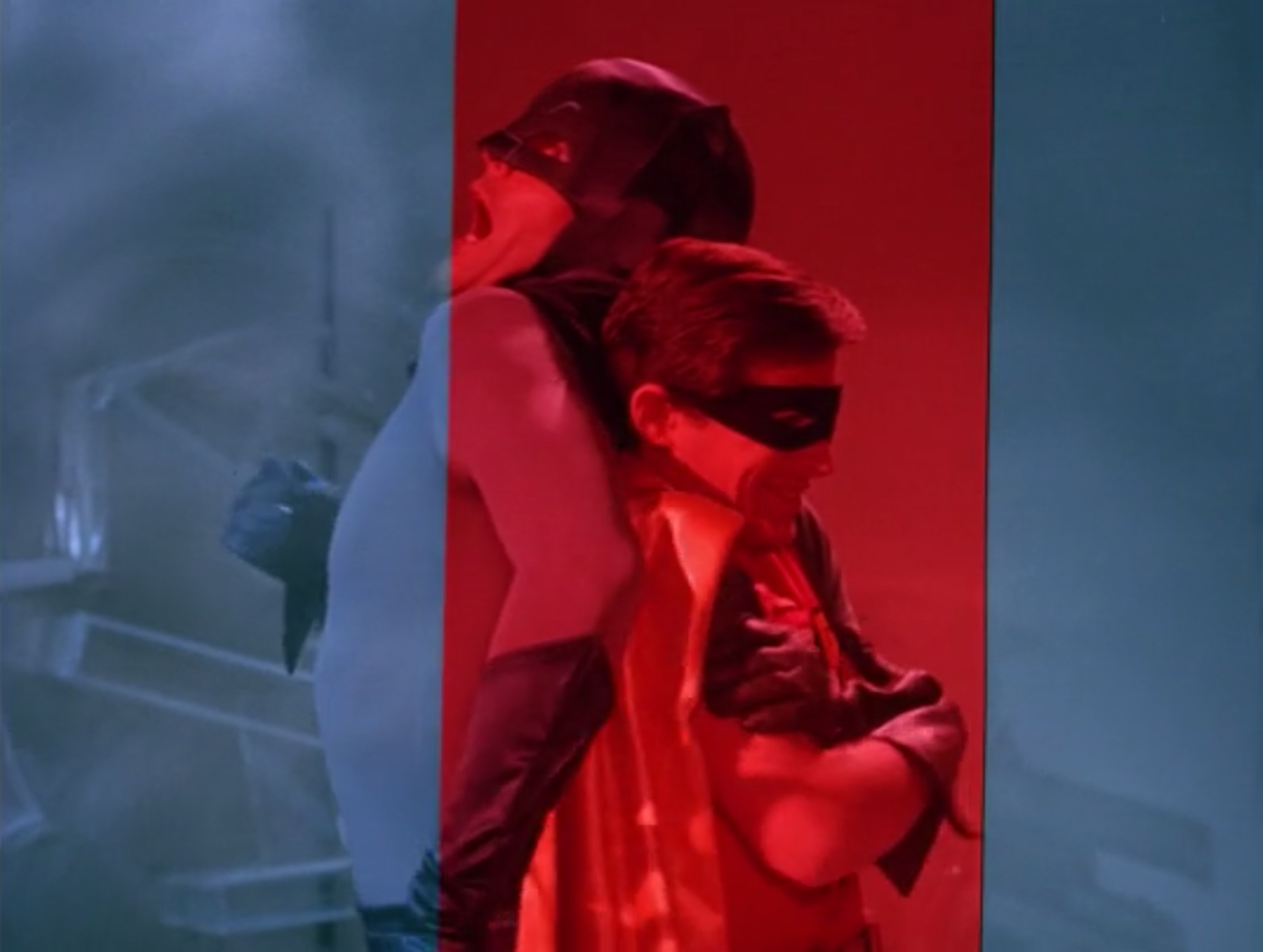 4. He Meets His Match, the Grisly Ghoul. As much as we loved seeing Robin shine on the show, Dick Grayson also had his moments like the time he went undercover to infiltrate Joker’s “Bad Pennies.” 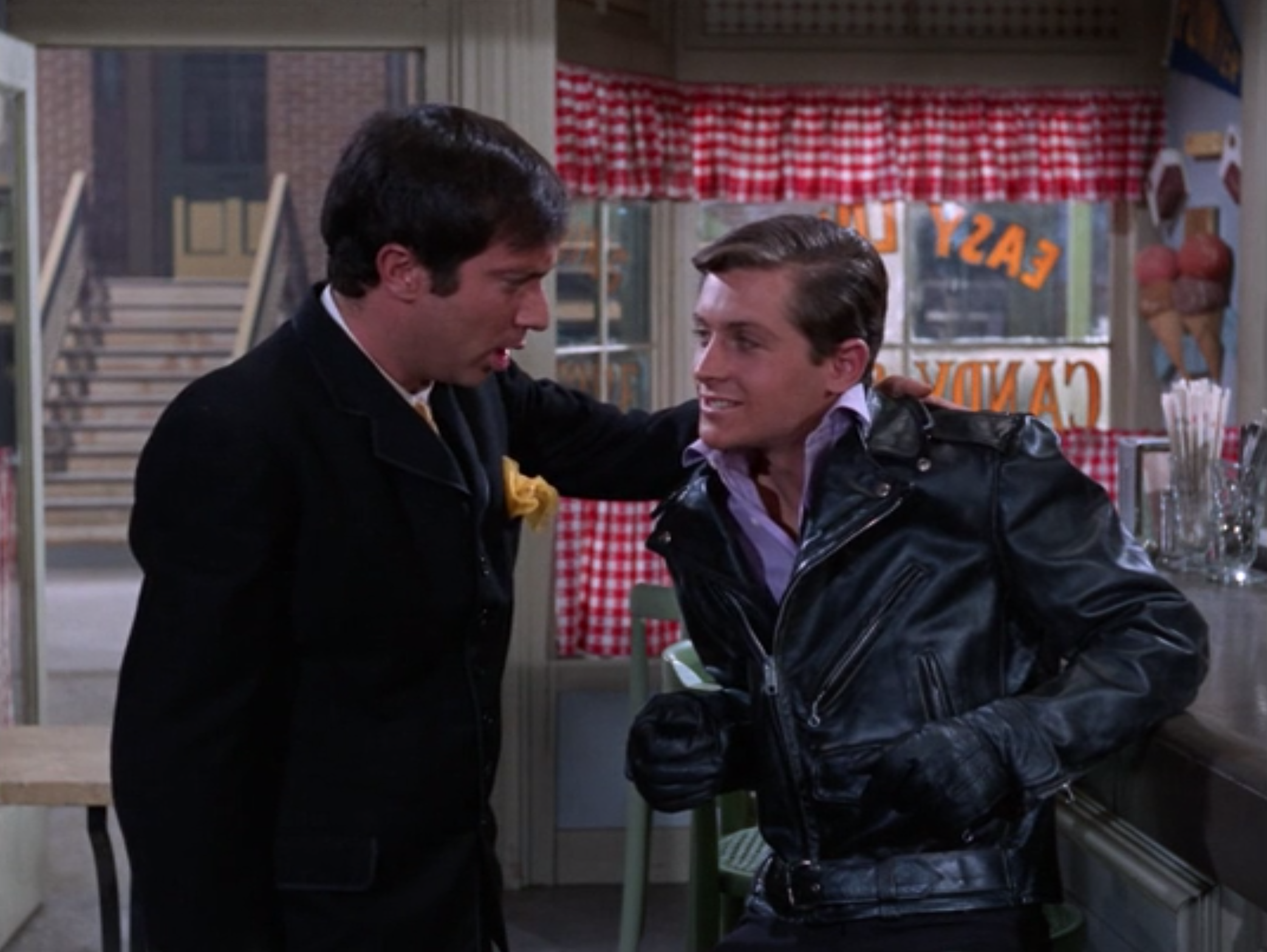 5. While Gotham City Burns. Robin found himself in his fair share of deathtraps on his own, but the second worse (we’ll get to the worst in a moment) was when Bookworm tied him to the clapper of a giant bell that is about to strike. 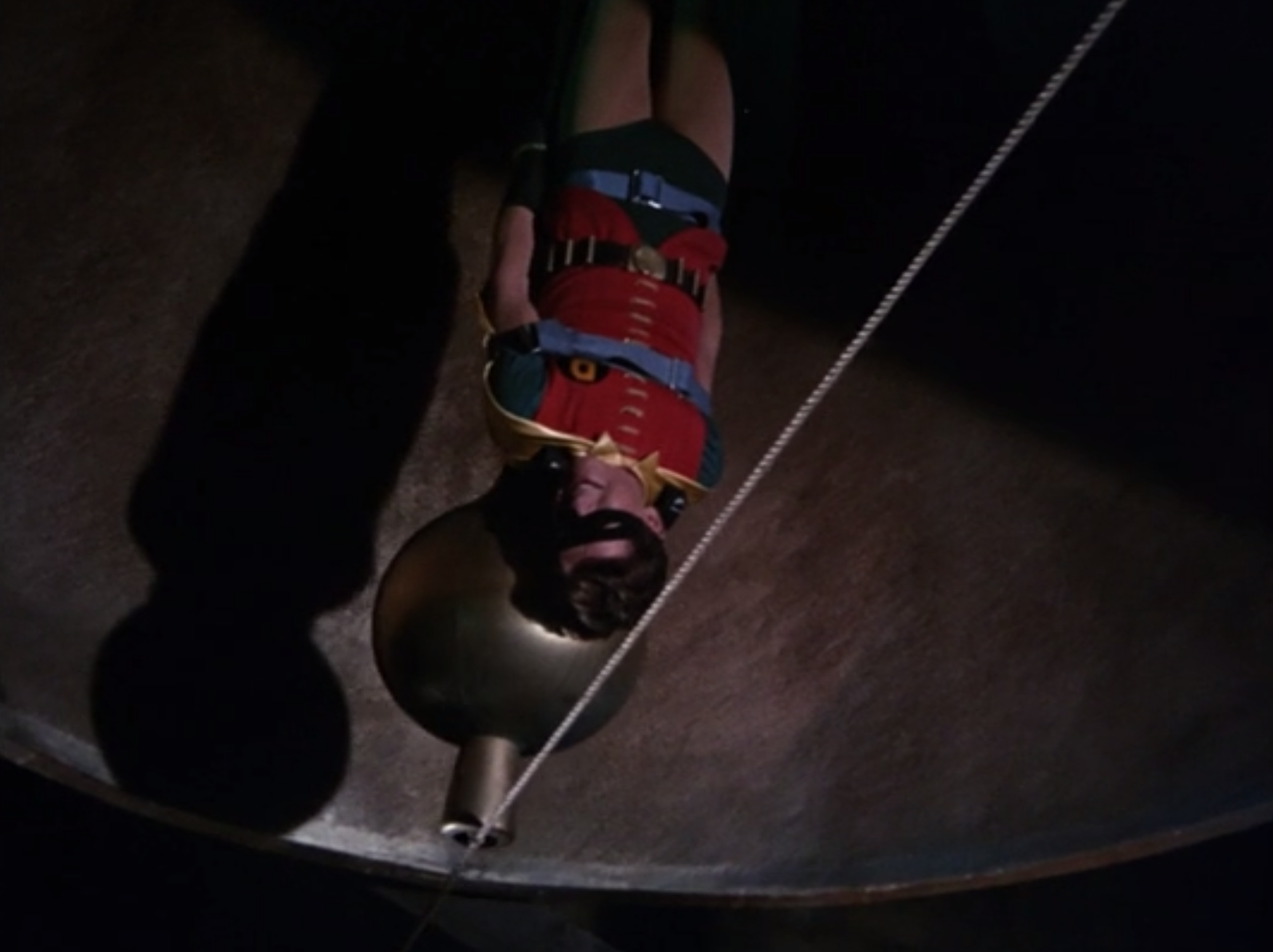 6. The Cat and the Fiddle. Throughout the series, there was a rivalry, of sorts, between Robin and Catwoman as he was always in the way of her being able to seduce Batman. It led to some great scenes with Burt Ward and Julie Newmar, including this one in which the two dress up as older millionaires conducting a transaction for a set of rare violins. 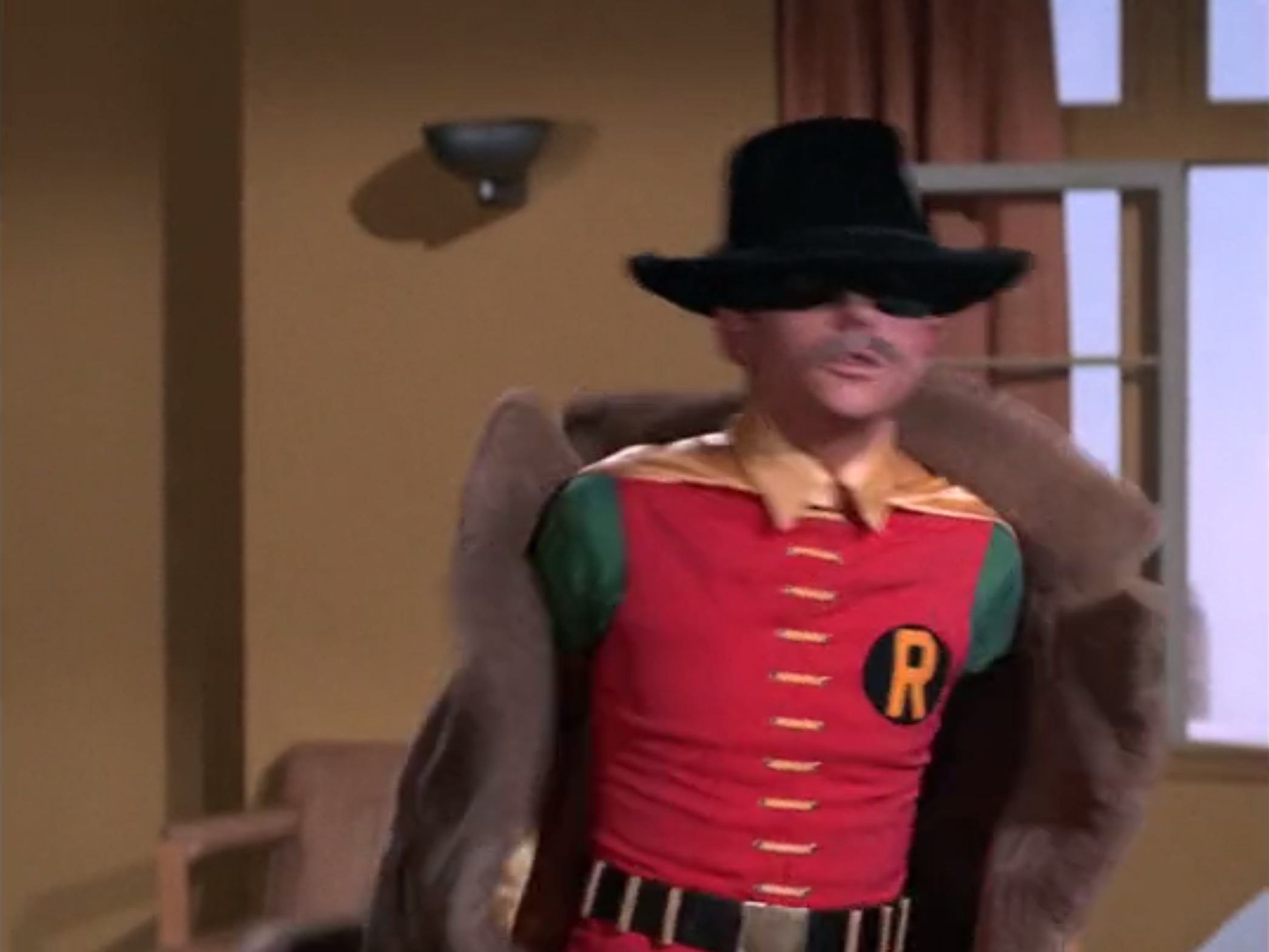 7. The Duo is Slumming. Quite often, Bruce and Dick made up excuses to Aunt Harriet for running off so suddenly at the start of an adventure and they were mostly throwaway lines. But sometimes, their “activities” would play a part later in the story, like the time here where Dick had to use the bird calls he was learning to aggravate a bird into attacking their runaway balloon. 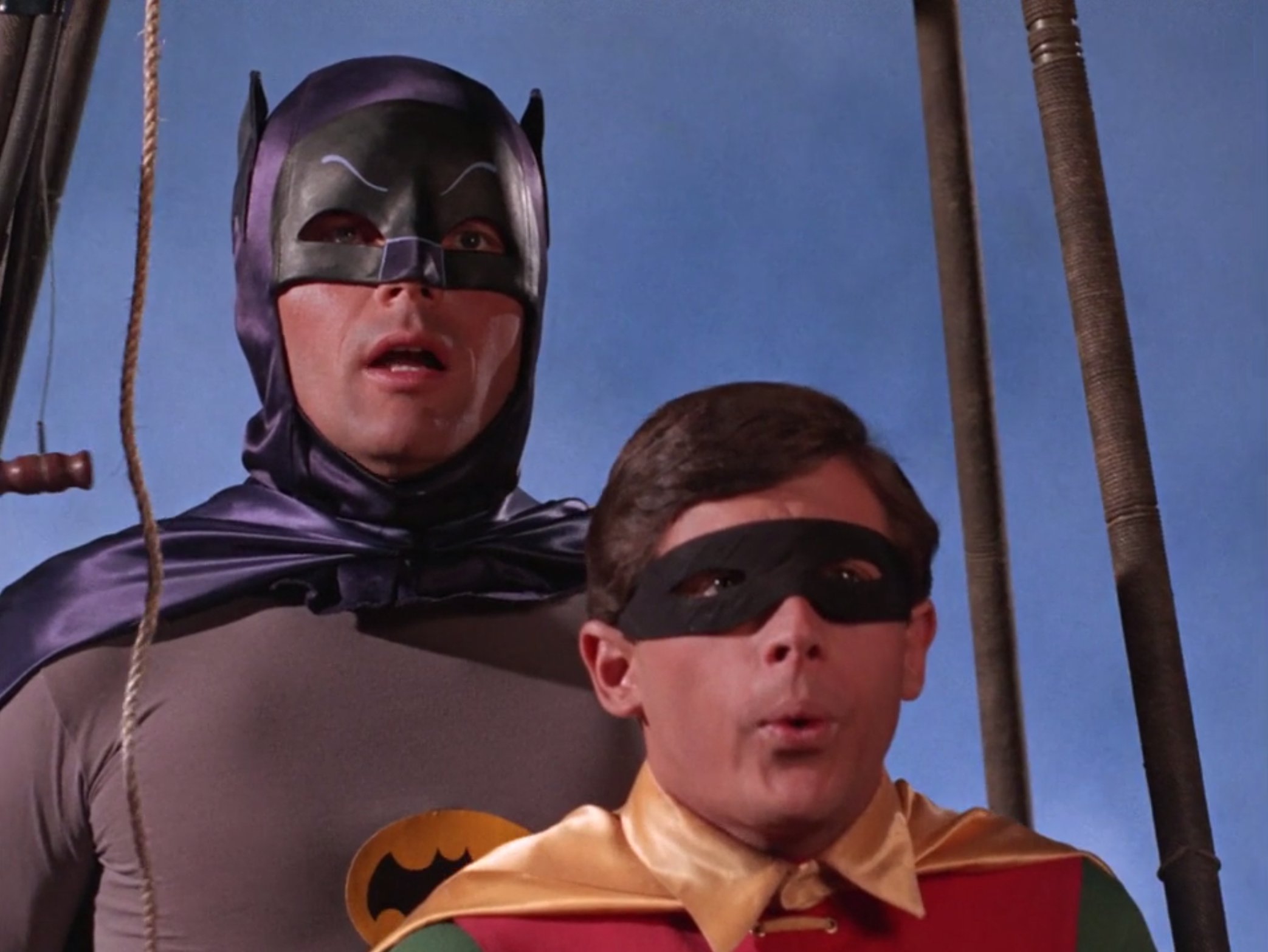 8. The Joker’s Hard Times. Writer Mark Waid has said this was his most vivid memory of the Batman series — and it is to so many of us as we watched Robin being swallowed by a giant clam while Batman and Venus looked helplessly on. The kicker of it all was that the viewers of the show didn’t originally have a night to wait to see the resolution, but rather a week as this was the second of a three-part story. 9. The Joker’s Last Laugh. It was fun to not only see Robin go on “routine crime patrols” by himself, but then he takes on two robots and holds his own until Joker increases their strength. 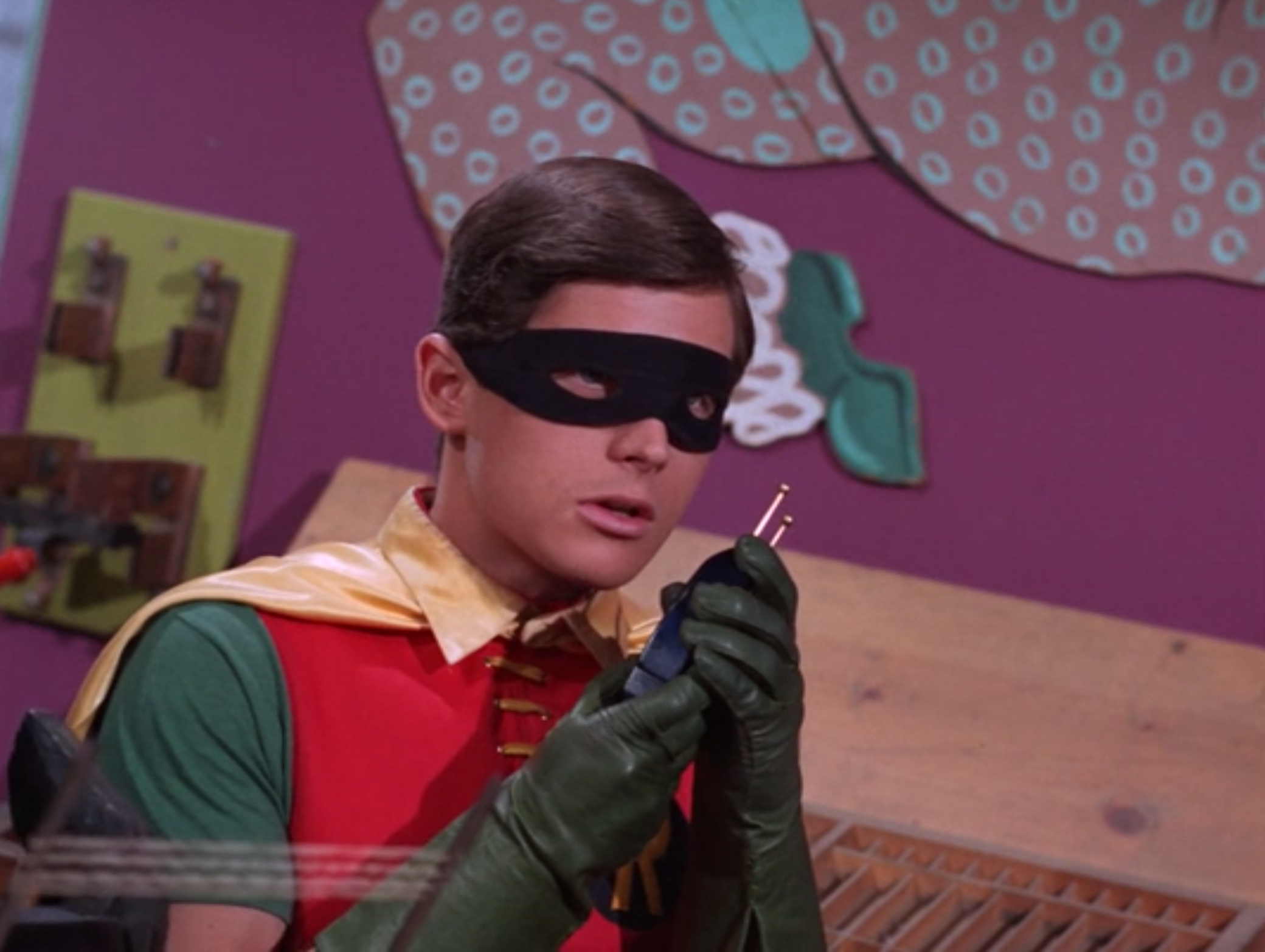 10. Batman’s Satisfaction. If you listen to my podcast, you know I never really liked the Green Hornet/Batman crossover, but it is worth it just to see Robin and Kato squaring off in the end. 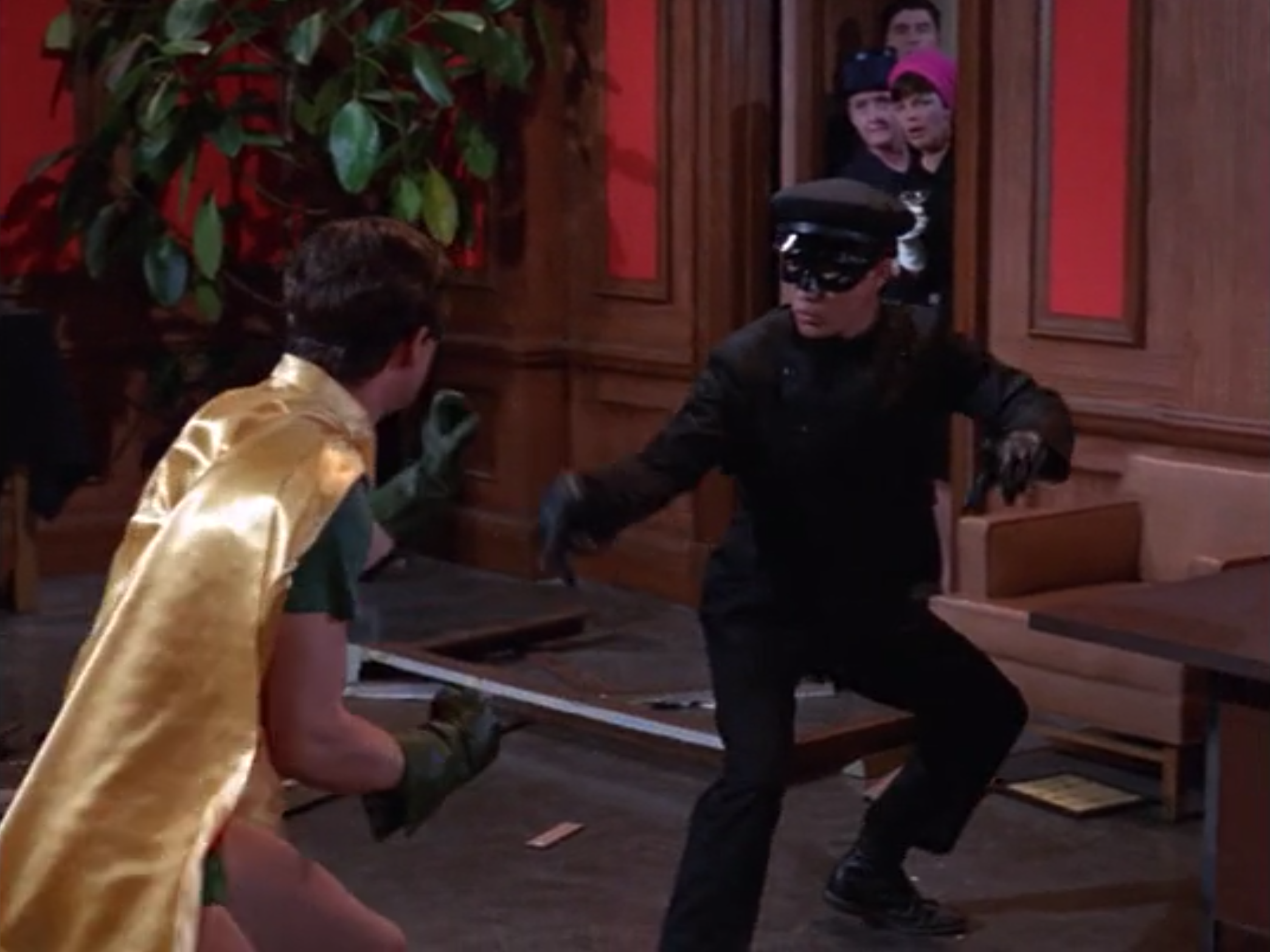 11. The Wail of the Siren. Robin often got short shrift in the third season of the series when Batgirl was introduced, but he is front and center in this story as Bruce Wayne is under the control of the Siren and it’s up to Robin and Batgirl to save the day. There’s also a little sadistic side to Robin as he’s willing to let Siren fall to her death unless she agrees to break the spell she has placed on Bruce. 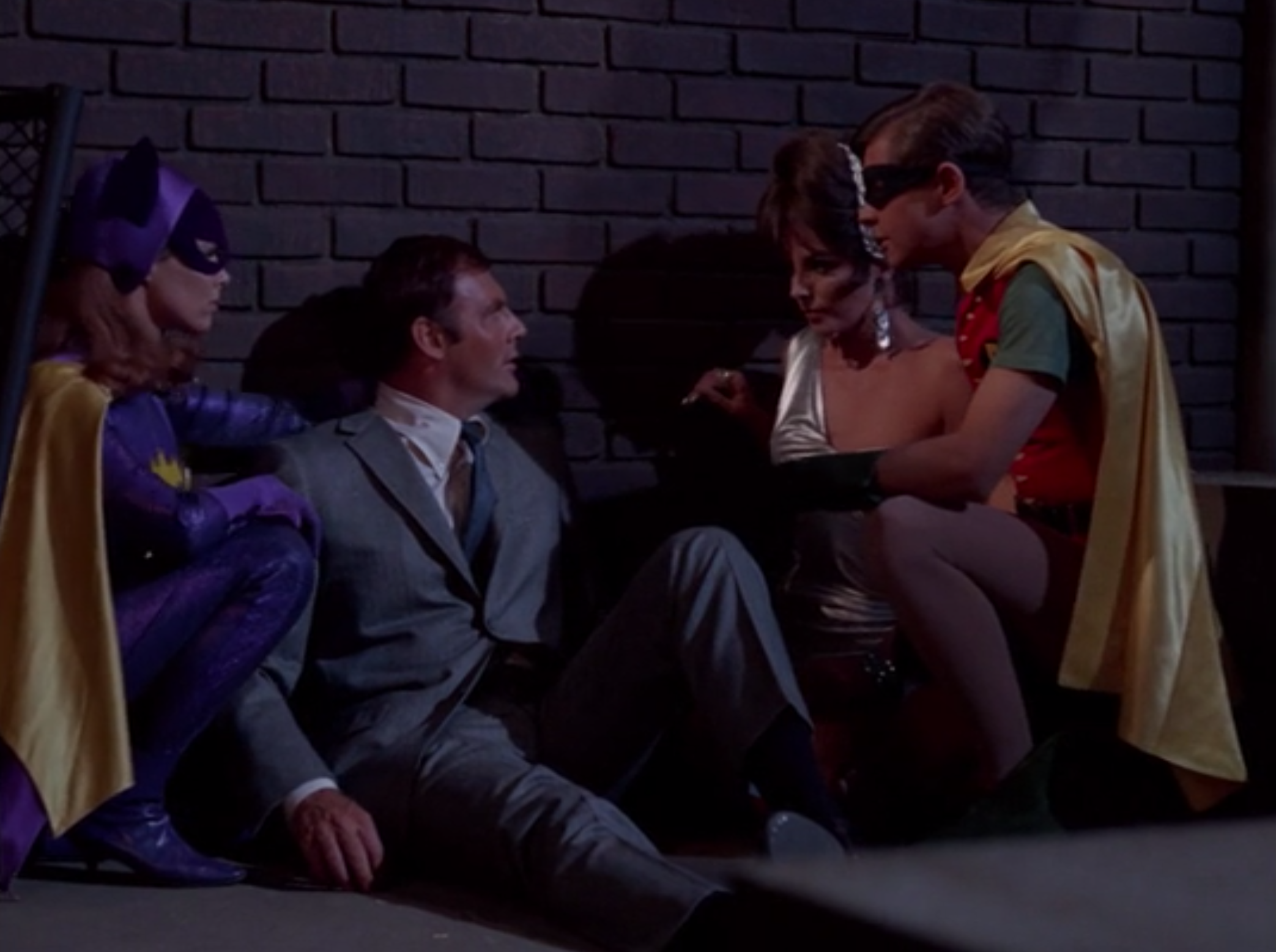 12. A Horse of Another Color. Stepping outside the character of Robin himself a moment, I need to reiterate what a great sense of comic timing Burt Ward had as both the Boy Wonder and Dick Grayson. This is one scene I loved where the person who has been learning so many languages throughout the series can only keep replying “Si, senora,” when questioned by Lola Lasagne. 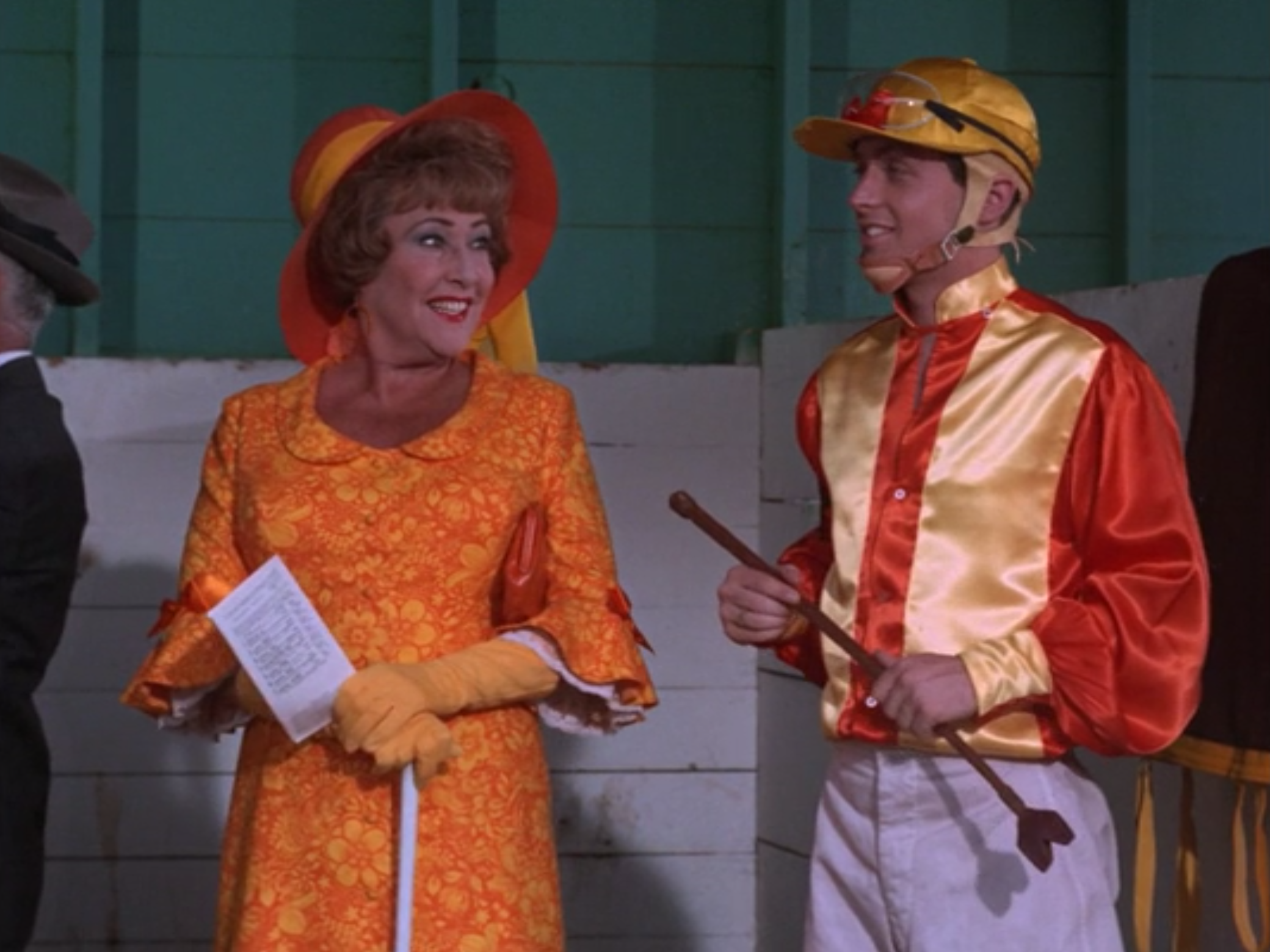 13, Surf’s Up! Joker’s Under! Dick Grayson gets some screen time — and takes command — as he officiates the surfing contest between Batman and Joker. 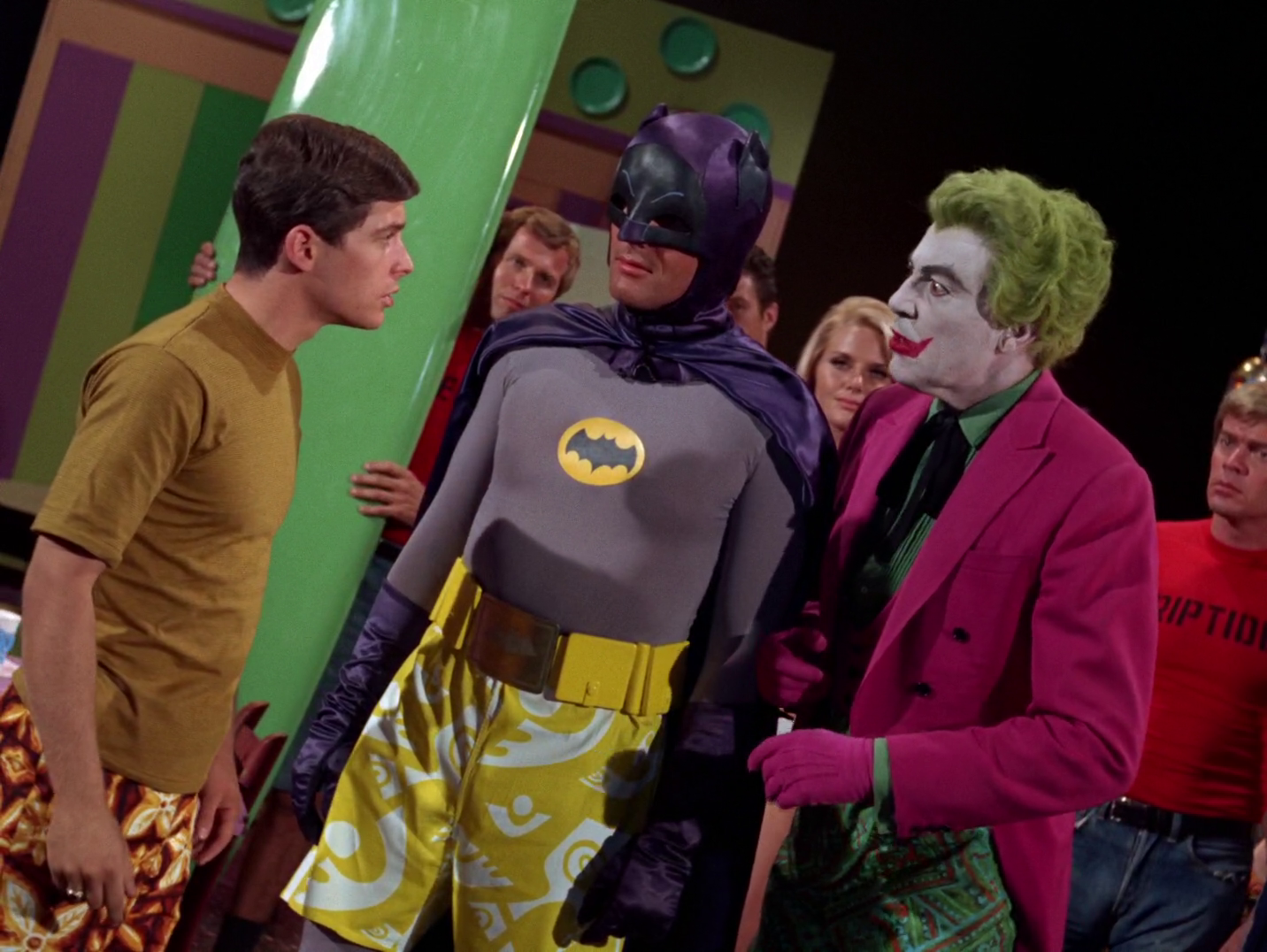